As Good As It Gets - Columbia Classics 4K Ultra HD Collection: Volume 3

Jack Nicholson, Helen Hunt, and Greg Kinnear turn in award-worthy performances for James L. Brooks’ little comedy/drama As Good as it Gets. Now on 4K Ultra HD Blu-ray currently exclusive to the Columbia Classics 4K Ultra HD Collection Vol 3 set, this constitutes the “fan-favorite” entry that serves to be a decently entertaining little jaunt but doesn’t hold up against the other films found in this box. With a lovely Dolby Vision transfer and a fine enough Atmos audio track, the disc also picks up some new and archival bonus features. Not the best title of the set in my opinion, but if you’re a fan this 4K Ultra HD release is a worthy upgrade. Recommended

Famed romance novelist Melvin Udall (Jack Nicholson) has a set routine. Actually, he has many, many set routines. Suffering from severe OCD, he barely gets through his day without something going wrong. For him at least. To keep his life exactly as he needs it, he manages to alienate and offend just about everyone, including his gay artist neighbor Simon (Greg Kinnear), and his favorite waitress Carol (Helen Hunt). But when Simon is nearly killed during a robbery and Carol has to change jobs, Melvin suddenly has to switch up all of his routines just to get his life back to normal. Only there is no normal and Melvin is at risk of becoming a better person in the process.

Interestingly enough we never reviewed As Good as it Gets here at High-Def Digest. We evidently missed out on the Twilight Time offering when it first dropped in 2012 and none of our writers ever double-backed to it. To be upfront with my thoughts on this film, I’m not a huge fan. It’s like Forrest Gump for me, where it’s well-meaning and entertaining with a great cast, but I don’t really care for it in the end. It’s one of those where if someone else puts it on and I walk into the room, I’ll watch it, but not one I ever have the drive to pull off the shelf and sit down to.

Admittedly my issue with As Good as it Gets has more to do with timing than the quality of James L. Brooks’ direction and screenplay. 1997 was a stacked year for amazing comedies, and dramas, with James Cameron declaring himself “King of the World” pushing spectacle filmmaking into the stratosphere with Titanic. We also saw a return to gritty noir-styled detectives with L.A. Confidential, fortune favored the brave Ben Affleck and Matt Damon with Good Will Hunting, David Fincher’s masterful mystery box film The Game, my favorite Quinten Tarantino film Jackie Brown, Paul Thomas Anderson’s incredible Boogie Nights… Kundon, The Ice Storm, Deconstructing Harry, Chasing Amy, Face Off - there were so many great movies that year and In my eyes, so many were more deserving of awards accolades and attention than As Good as it Gets. 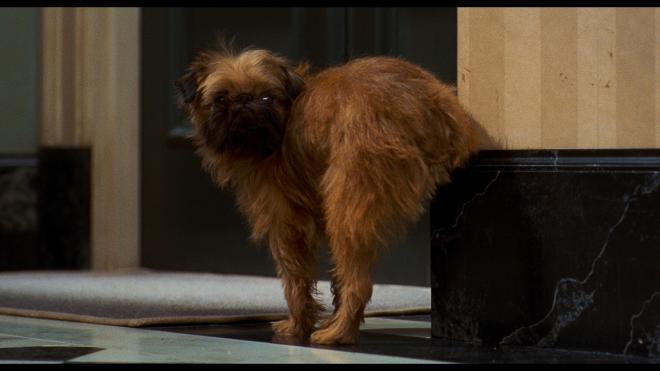 If all you’re in for is turn-your-brain-off entertainment, this film does the trick. I’ll give all credit to Jack Nicholson and Helen Hunt for delivering genuine Oscar-worthy performances with Greg Kinnear in amazing form as well. These three and that little rat dog carry the movie. Without them, I think this film would have been forgotten long ago. James L. Brooks can craft some impressive character dramas with films like Terms of Endearment and Broadcast News, and he delivers some excellent multi-dimensional characters for his actors to work with. He also has a steady hand directing his actors with each getting at least one excellent scene to show their talent. Sure there are the saccharine bits with the dog, but I can stomach that when coupled with the rest of what works well here.

It’s a nice movie, but it’s not anything close to what I’d call a great movie. I was almost 16 when I saw this in theaters (at least twice if memory serves). While I would capitulate my dislike of the film chalks up to being an angsty POS at the time, I was also at that age where I stopped getting carded to go to R-rated movies and my world of cinema exploded. That long list of titles above was just some of the movies I saw in theaters or rented at a time when I felt like my definition of what a movie could be just kept getting reinvented. As Good as it Gets was just safe entertainment and to this day it’s just that, safe. It doesn’t do anything dramatic or amazing to reinvent the drama/comedy genre, it just plays to expectations and I guess that’s why today I only think of it as a mediocre film. Come for Jack, Helen, and Greg, stay for the dog. 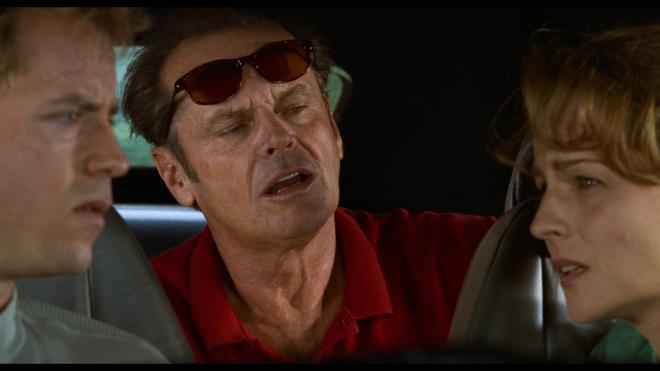 Vital Disc Stats: The 4K Ultra HD Blu-ray
Wash your hands ten times, As Good as it Gets arrives on 4K Ultra HD Blu-ray as the sixth and final entry of Sony’s Columbia Classics 4K Ultra HD Collection Volume 3. As with the past volumes, this film gets its own two-disc case with slipcover and classic artwork for the insert art. The discs get their own bays without stacking. The 4K disc scores a BD-100 disc with the 1080p side-stepping the cracks onto a BD-50 disc. The discs load to a static image main menu with navigation options along the bottom and the bonus features panel along the right side of the screen. 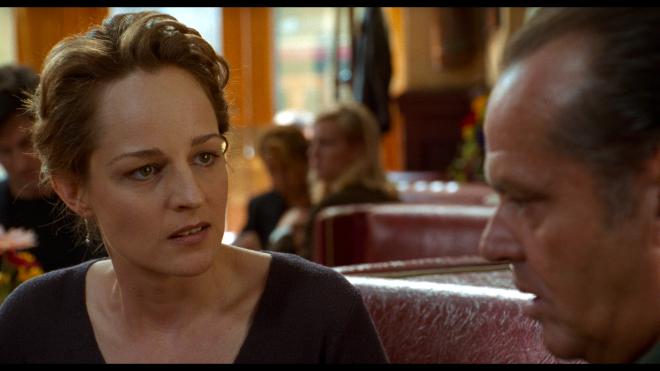 While I may not love the film itself, As Good as it Gets tip-toes onto 4K Ultra HD Blu-ray with a lovely 2160p Dolby Vision (and HDR10) transfer that easily bests the old 2012 Twilight Time Blu-ray. This film loves closeups and every actor gets plenty of face time allowing you to study every laugh line and wrinkle or ball of fur on any given actor or dog’s face. Fine film grain is intact without appearing smoothed out or too noisy to function. Textures in clothing are all on display as are the film’s many New York locations. The Dolby Vision HDR pass does an excellent job of highlighting colors, giving us those deep inky blacks with bright crisp whites. Again with the close-ups, any given scene has some intimate and intricate lighting and John Bailey’s cinematography is quite beautiful in that regard. Throughout I was most impressed by the sense of three-dimensional depth to the image. When Melvin is waiting around for the people in his favorite table to vacate or when the three of them are in the car together, it’s a lovely deep-looking image. Again, it may not be the most stunning release ever on 4K, but this is another beauty of an effort from Sony. 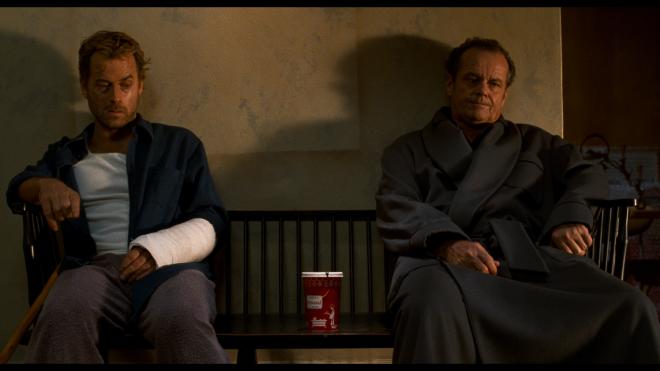 As Good as it Gets comes in with a pair of audio tracks to choose from, a DTS-HD MA 5.0 (odd right?) mix, and a new Dolby Atmos track. Truth be told, either track works and the 5.0 mix certainly holds its own. The Atmos mix is nice, but aside from busier locations, there’s not a whole hell of a lot of cause for it. Given that it’s such a dialog-heavy film, that’s the main auditory function of either track so there’s very little to move away from the front/center channels. Sides and rears only sporadically come to life with height only carrying some load for those cluttered sequences in restaurants or in city streets. To that end, I’ll say the Atmos track does work best giving a more fully realized sense of space and dimension but between the various character’s apartments, it’s a pretty quiet film that sounds perfectly fine on either track you launch. 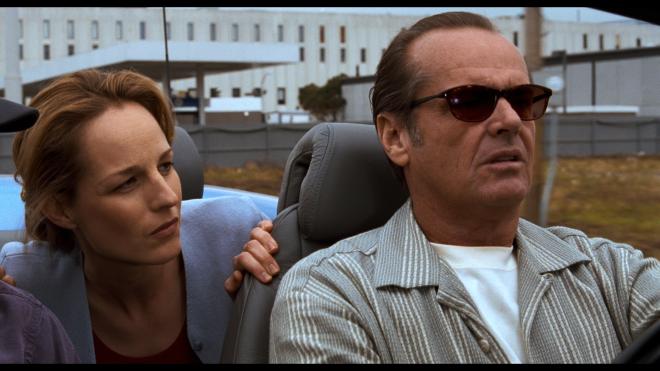 As has been the case for each entry in this run of Sony’s Columbia Classics 4K Ultra HD Collection Vol 3 set, As Good as it Gets picks up a fine assortment of bonus materials to pick through. Thankfully extras that were found on the old DVDs like the Cast/Crew audio commentary returns for this set. Frustratingly enough, it doesn’t appear on the actual 4K disc. Not as robust a set of extras as the other films of the set, there are some nice little bits for fans to pick through. All of the bonus features are on the 1080p Blu-ray disc. 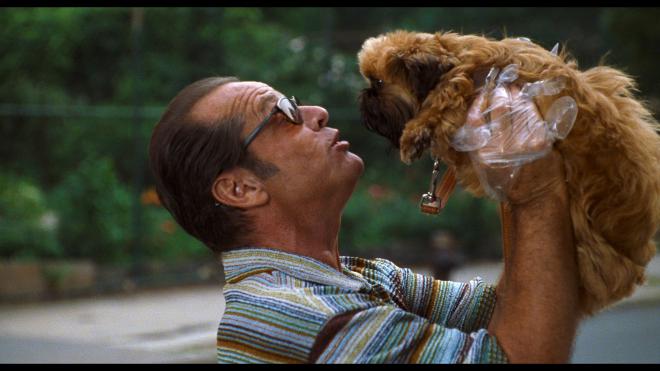 No, I do not love As Good as it Gets. I’ll say it’s a nice movie with fine performances, but like a bag full of candy at Christmas, it’s enjoyable enough at the moment but I don’t get much out of it in the end. Jack is Jack and won an Oscar for being Jack. Helen Hunt proved her dramatic chops with this film and she’s a true highlight, but for me, Greg Kinnear is the one with the most humanity and range and he was sadly shut out come awards season. But, the dog is cute, so there’s that. For me the weakest film of Sony’s Columbia Classics 4K Ultra HD Collection Volume 3 set, As Good as it Gets earns a very impressive Dolby Vision transfer with a pair of fine audio tracks to work with. Bonus features are a bit slim but it’s nice to see the archival materials missing from that old Twilight Time disc come back into the fold. Recommended.