Before it became a Cannon franchise, Charles Bronson starred in the provocative thriller Death Wish. Nearing its Golden Anniversary, the film hasn’t lost a step as it thoughtfully plunders the ongoing debate about violence and guns that still grips this country. KLSC delivers a new 4K Ultra HD Blu-ray with an overall excellent Dolby Vision transfer, two audio options, and a host of worthwhile bonus features. Highly Recommended

Being a good honest man is supposed to keep you out of trouble, or at least that’s what Paul Kersey (Charles Bronson) believes. A Conscientious Objector during his service as a medic in Korea, he’s now a successful architect and building planner living in New York. But when a gang of hoods breaks into his home raping his visiting daughter and murdering his wife, Paul's dormant killer instinct awakens. Every night he goes out looking for trouble, armed and ready. When his body count of murderers, rapists, and thieves gets media attention, NYPD Inspector Frank Ochoa (Vincent Gardenia) is tasked with finding and stopping this vigilante - even if his actions precipitate a drastic decline in violent crimes in the city.

Loosely based on the novel of the same name by Brian Garfield, Death Wish is actually a smart and calculated thriller. If you know the name by franchise reputation, this is a very different film than what would clog up theater projectors during the 1980s. While Bronson certainly had a reputation for action movies, this film actually plays closer to a serial killer thriller as one man is pushed to the breaking point, kills someone in self-defense, and discovers he has a taste for it. He’s not out to find the men who killed his wife and left his daughter a catatonic mess, he uses himself as bait to lure in the next would-be mugger or murderer into a death trap.

Directed by Michael Winner (who would direct the following two franchise installments), the film aims to take an honest look at violent crime, gun culture, and vigilantism. While the movie almost celebrates Kersey’s descent into becoming a vigilante, the book worked harder to make the opposite point. Even if the film is more sympathetic to Kersey’s more violent side, I’d argue that it doesn’t exactly glorify his actions either. The media coverage and some of the cops in the film may take his side, but Kersey is never presented as a hero. In fact, I feel like it goes out of its way to make him appear pretty damned creepy, a man slowly slipping into insanity punctuated by one final chilling shot. But that’s the mark of a great movie that has sadly remained timeless. The fact you can debate it and what it's trying to say is an aspect worthy of praise and attention. 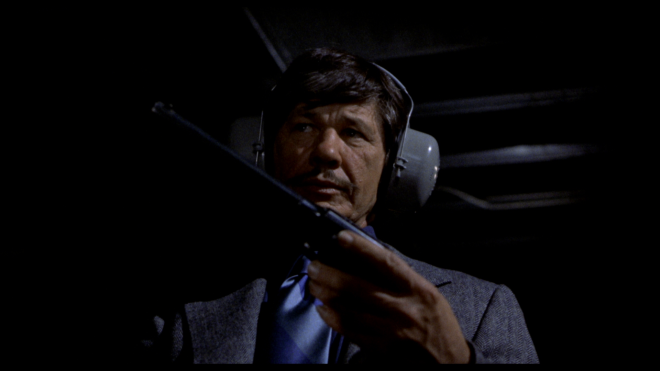 While Winner’s slick and gritty direction and Wendell Mayes's (Anatomy of a Murder) and Gerald Wilson’s screenplay are excellent, it’s the performances that stick. I always felt like Bronson was never given the credit he deserved as an actor. His later Cannon films often overshadowed his earlier and better career efforts. It’s as if we judged Liam Neeson’s career only by his post-Taken output instead of the twenty-plus years of acting before that film. It wouldn’t be fair. And in Death Wish, I feel like Bronson delivers one of his finest efforts as a man pushed to the edge. His best scene is with Stuart Margolin at the gun club and is a great example of Bronson actually playing the character, we get a little back story, but we also learn this pacifist’s hidden talents for firearms.

Then we have the rest of the cast to highlight. Steven Keats is in fine form as the wormy ineffectual son-in-law. The eternally lovable Jeff Goldblum showed his range as one of the violent young punks. Vincent Gardenia is excellent as the shrewd overburdened inspector. Olympia Dukakis makes one of her first appearances as does Christopher Guest as two cops working the case. Also scoring blink-and-you-miss-them roles are Paul Dooley, John Herzfeld, Al Lewis, William Bogart, and Helen Martin. 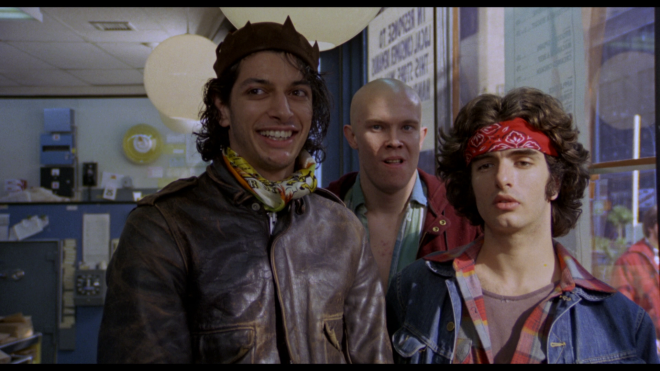 Fifty years, four sequels, and a remake later, Death Wish still packs a punch. Smartly written and directed and well acted, the film has a lot more to offer than most people give it credit. Made at a time when violent crime was on the rise, the film was a smart look at violence and the mythical “good guy with a gun.” It’s wild that this film still has a place in the conversation so many decades later. The look of New York and the fashions may have changed and there are electric-powered vehicles on the road, but the issues it conjures are still debated today.

Vital Disc Stats: The 4K Ultra HD Blu-ray
Death Wish stalks the streets of 4K Ultra HD Blu-ray with a new two-disc release from Kino Lorber Studio Classics. The 4K is pressed on a BD-66 disc with the 1080p picking up a Region A BD-50. The discs are housed in a two-disc black case with reversible insert art and an identical slipcover. The 4K disc loads to an animated main menu with traditional navigation options.

Note: I had some difficulty sourcing images from the 4K disc so images have been pulled from the included Blu-ray to highlight the reframing and some of the color timing changes. When I can I aim to swap in some 4K images and a proper video sample. Death Wish is a unique prospect for 4K Ultra HD in that it’s a film that was never supposed to look “pretty.” Similar to other 70s new york films on the format like The Taking of Pelham One Two Three or Maniac, the film mostly takes place at night or in low-light conditions. This new Dolby Vision transfer supplied by Paramount may not be the most beautiful disc ever but it's a notable step up in overall detail clarity, black levels, and color timing. For starters, film grain is well rendered and naturally cinematic without any signs of the frustrating grain management of Paramount’s own catalog disc releases. Details are clean and often striking - daylight scenes get the best care and attention in that regard. Night and darkly lit scenes still exhibit some notable improvements but they’re a little less obvious. Interestingly the film also appears to have been reframed a bit - some scenes it’s quite clear like the opening with the Kerseys on the beach others are not quite so obvious: 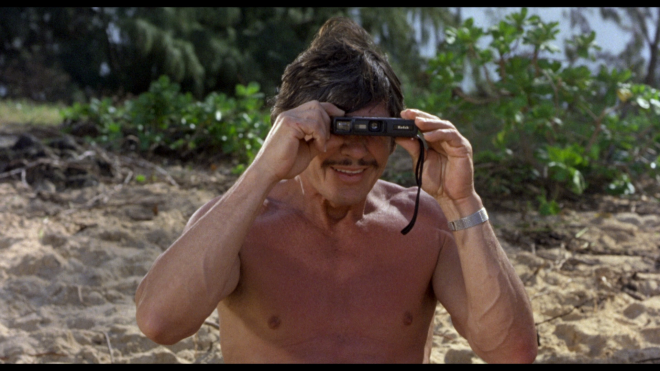 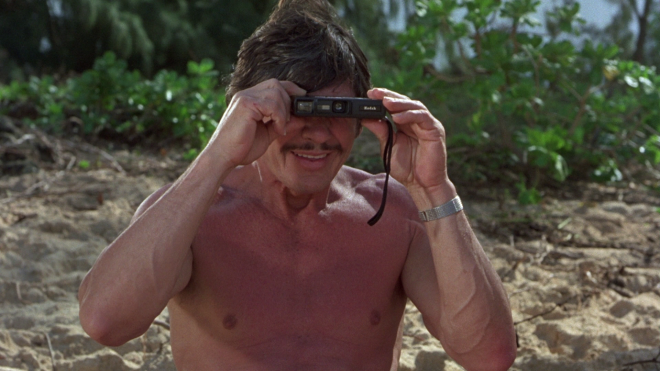 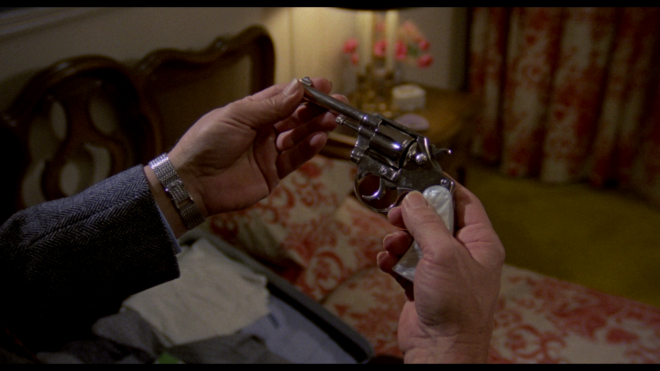 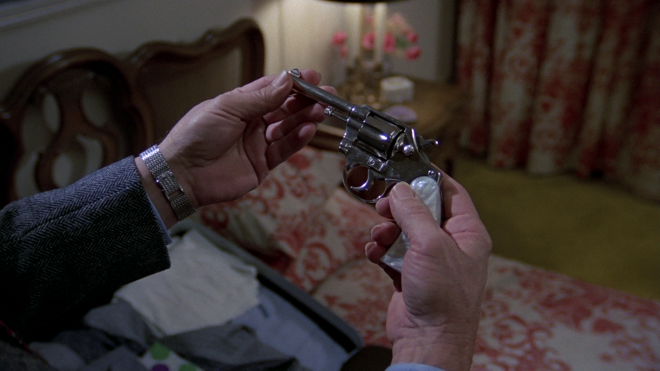 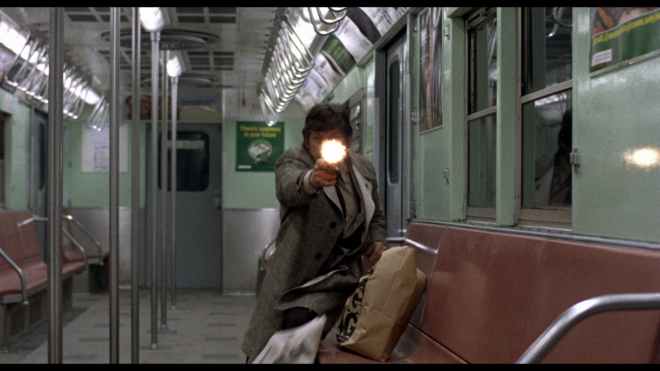 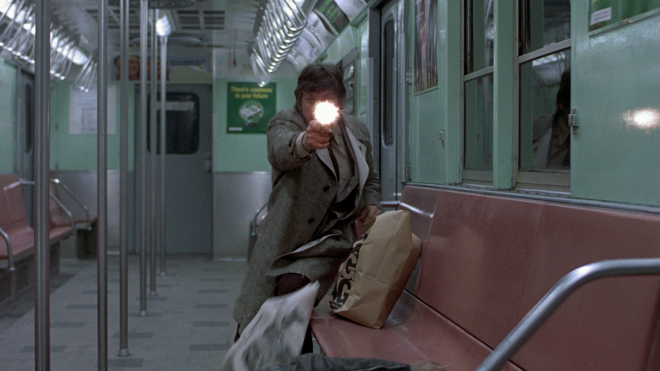 Dolby Vision does what it should do best by highlighting and enhancing colors and contrast. I noticed this disc and the included Blu-ray have much more pleasing color saturation. There’s more yellow in the image and blues have been pulled back a tad and reds are much stronger and more lifelike rather than looking so pink on the old disc. Skin tones are healthy and natural. Black levels also make some gains with the deep dark locations and shadows looking more true black without the crush issues of the old Blu-ray. Whites are crisp without blooming or any troubles there. The elements aren’t picture-perfect clean, there’s still some slight speckling here and there, but better overall than we’ve seen. I actually kinda like the speckling in this instance, gives the film an even grittier appeal and presentation. Overall this is a solid improvement and a nice addition to the growing 4K collection of 70s gritty thrillers.

Weirdly enough though, these improvements don’t seem to carry over to the new Blu-ray master. It’s extra frustrating here because I couldn’t pull proper images from the 4K disc and I have to use these to show some of the differences in framing and overall color timing. The color changes are there but they’re not as nuanced as the 4K and in a few sequences I felt like some skin tones looked ashy compared to the 4K or the old 2014 disc. Likewise, black levels and contrast just aren’t as cleanly rendered. Details also seem to be a tad off on this new Blu-ray compared to the 4K disc and older 2014 disc, I can’t figure out why that’d be. The bitrate is nice and healthy, so it’s one of those odd mysteries where if you’re rigged for 4K that disc is the best way to go for sure, but this included Blu-ray is just not as impressive and not the reason for the upgrade. 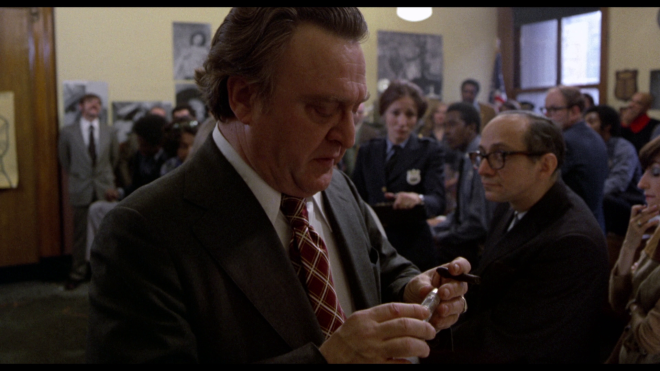 This release of Death Wish comes with what sounds like the same DTS-HD MA 2.0 track as previously heard on past discs as well as a new DTS-HD MA 5.1 track that actually is pretty damn good. The film itself isn’t wall-to-wall action but the new 5.1 track works the surrounds nicely especially during sequences where Paul Kersey is trolling the streets of busy redlight districts in New York or on the subway trains. Sequences in the bustling police department are another highlight for the surround activity. Spacing is more than adequate for giving the soundscape a sense of dimension and atmosphere. Now the 2.0 track doesn’t sound like a simple fold-down of the 5.1 track. Playing this disc and comparing it to Paramount/WB’s old Blu-ray I didn’t hear any differences nor did I notice any kind of stilted spacing you can notice sometimes in fold-downs. At the end of the day, both tracks work well but I’d tip my hat to the 5.1 here. 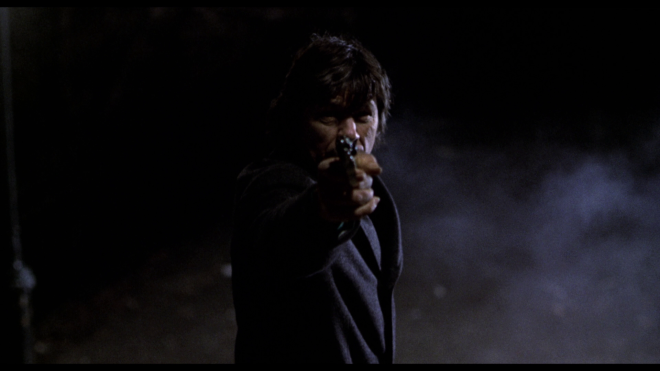 This release of Death Wish doesn’t come locked and loaded with bonus content, but what fans can dive into is a great new audio commentary with film historian Paul Talbot, author of the Bronson’s Loose! books. The track offers up a lot of insight and interesting tidbits about the film and where it hit in Bronson’s long career. After that is a new very cool interview with John Herzfeld who has a memorably brief appearance in the film. 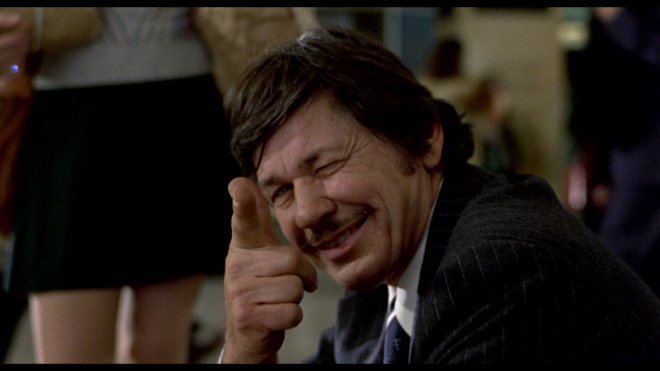 Death Wish is a seminal film in the action/thriller genre and a highlight of actor Charles Bronson’s long career. Its reputation may have taken a knock from the very goofy (but highly entertaining) 80s sequels, but this original remains a prescient piece of work nearly fifty years after its release. Now on 4K Ultra HD Blu-ray, the film picks up a welcome new 4K Dolby Vision transfer that leaves it looking better than ever without losing the gritty and grimy aesthetic it's known for along with a new 5.1 audio track, and a solid informative new audio commentary and interview. Another classic comes to 4K in fine form offering fans a fitting upgrade - Highly Recommended