There’s truly no downplaying the effect that Eminem had on the world of hip-hop and American culture at large in the early 2000s. As much a cunning linguist as a savvy storyteller, Eminem turned those storytelling skills into Hollywood magic with 8 Mile, the award-winning 2002 drama that incorporated autobiographical elements of Eminem’s life and found harsh beauty in a tale of survival through creativity. It’s got the trappings of prestige cinema and the firecracker energy of Eminem, plus the studious and understanding eye of filmmaker Curtis Hanson. And 20 years later, it now hits all the right beats in 4K Ultra HD with a pleasing transfer and DTS:X audio that preserves the high-contrast, documentary-style aesthetic that Hanson and cinematographer Rodrigo Prieto set out to create. While no new special features have been added for the film’s anniversary and only a few archival featurettes are included, the new transfer makes this release is Worth A Look!

If 20 years of reflection have given anything to 8 Mile, it’s more power amidst the flock of overbaked prestige biographical dramas that litter each and every awards season. While 8 Mile has every reason to fail, especially as a representation of poverty and race in Detroit, it gracefully evokes the personal devastation of failure in a world where you’re set up to fail and the struggle to transcend those problems. And while it does suffer a bit from the kind of bold and bombastic dramaturgy that runs through prestige dramas, it’s all couched within Eminem’s rebel yell of a personality. When you feel the proceedings veering too sharply toward awards clips, and the film does frequently do that, it luckily doesn’t soften the visceral impact of its key sequences.

8 Mile follows the travels of Jimmy “B-Rabbit” Smith Jr. (Eminem) and his struggle to transcend his impoverished life in Detroit with the power of his musical creativity. Jimmy works during the day at a car factory, saving up scraps to book studio time and help his alcoholic mother Stephanie (Kim Basinger), with whom he lives in a trailer with. But when Jimmy is presented with a chance at local fame, he buckles down and throws everything he has at it, bumping up against a rival rap group, his mom’s abusive boyfriend, the domineering manager at work and pretty much anyone trying to keep him down.

Curtis Hanson had been turning in prime studio dramas for decades before this film, and the inclusion of cinematographer Rodrigo Prieto (Amores Perros) brought exactly the harsh, street-level look needed for this film to work. Everything about a story involving finding the will to cross the imaginary has the capability to ring false, but the unique, high-contrast look lends power to the histrionics. There’s a lot of handheld camerawork to emphasize the free-associating style of hip hop and it makes these situations as organic and tailored to the characters as possible. Again, has pretty much every reason to call attention to itself (and it frequently does), yet the showmanship is very, very strong. 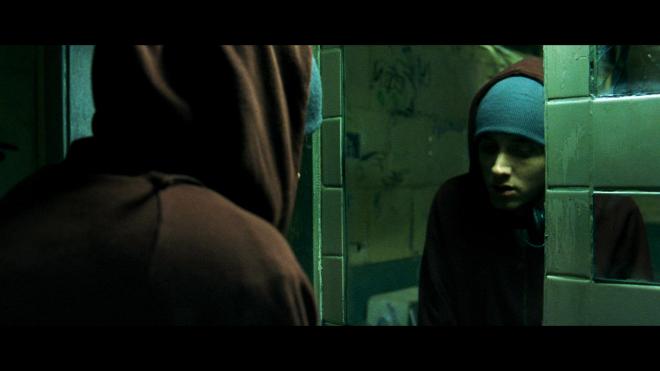 Maybe the greatest feat of 8 Mile is Eminem as leading man. Going back through and reading production notes reveals how jarring the rehearsal style was for the film over his musical ventures. Hanson had Eminem practicing lines for weeks and while the musician had a degree of creative control over certain aspects of the story, the collaboration between the two artists created the kind of humility and commitment that an underdog story so desperately needs. And Eminem handles all the beats rather well, somehow effortlessly recalling the pains of failure and the joys of success just as strongly as the anger and self-hatred associated with those memories. It makes for a beguiling experience.

Another standout for me on this rewatch is Brittany Murphy as Alex Laterno, the shoehorned love interest that gives Jimmy the added vigor to get up on that stage. It’s a completely thankless role done genuinely by Murphy’s ability to make the most manipulative of moments feel tender. The loss of her talent becomes even more apparent here.

All in all, 8 Mile holds up quite well, despite some rather false notes felt during Jimmy’s frequent tête-à-têtes with his mother and the general cloying nature of prestige autobiographical dramas. But what stands out feels more powerful than ever, like those electrifying rap battles and an equally electrifying performance by Eminem.

Vital Disc Stats: The Blu-rays
8 Mile picks up the microphone with a two-disc (BD100 for the 4K and BD25 for the Blu-ray) release that comes housed in a standard black case with poster artwork on the front. The 4K disc boots up to a standard menu screen with options to play the film, set up audio and video, or explore bonus features. 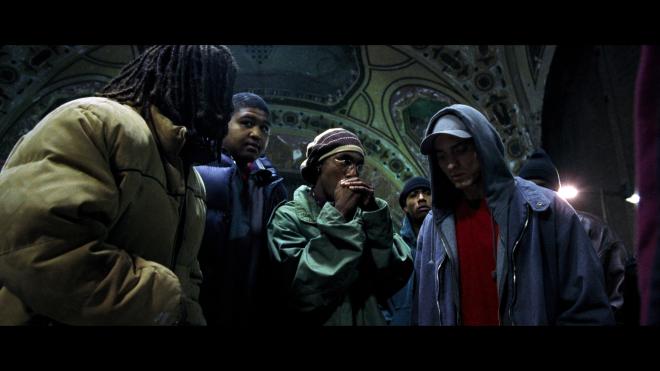 Going back to an earlier point in my review, 8 Mile has the kind of harsher, higher-contrast look that may not immediately wow viewers in 2160p resolution. But where previous Blu-ray releases have done a terrible job at encoding the deep black levels and the warm highlights that come peeking through, this new 4K UHD does the complete opposite. Weirdly enough, 8 Mile was finished as a digital intermediate in 2002, and this new presentation does look to be an upscale of that existing master rather than a completely new restoration. While that may be disappointing to some, it’s clear that the upscale resolves everything much better, with a nice layer of film grain and dank, desaturated colors looking much more defined here.

The back cover of this release incorrectly lists the 4K presentation as being aided by Dolby Vision HDR. Rather, this presentation has HDR10 that’s applied rather delicately given how HDR could really blow out a lot of the details in the film. In particular, the HDR10 layer gives vibrant depth to the toned-down brown and blue primaries. Sequences like the abandoned house fire really stand out without marring the impact. 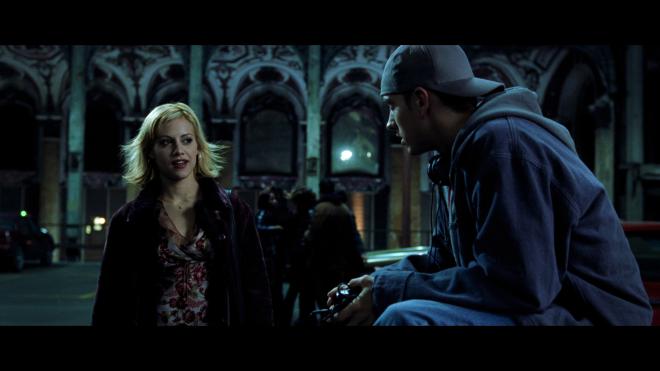 Curtis stated to Prieto that he wanted the film to “…feel like a weed emerging from a sidewalk.” And it’s clear Prieto took that to heart, as there’s a ton of moments where the darker nature of the world gives way to beauty, whether bold or understated. The HEVC encode handles these moments rather well, like the way the sun hits Kim Basinger’s hair in that run-down trailer park. Overall, this is a presentation that respects and preserves the source limitations. And although an upscale from a 2K DI isn’t an immediate reason to upgrade, it’s clear here that the uptick in resolution does the existing master great favors. 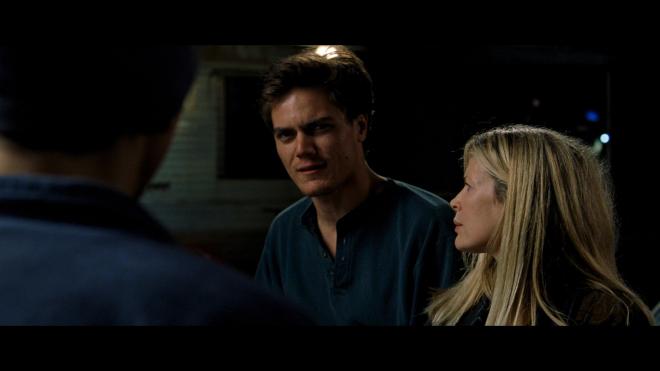 Speaking of upgrades, 8 Mile gets a new 7.1 DTS:X Master Audio track that easily jumps over the 5.1 DTS-HD MA track included on the 2009 Blu-ray. While the core effects may be the same across both tracks, the 7.1 track clearly offers deeper bass and more dimensions during the key rap battle sequences. While the majority of the movie is relegated to the front channels, some intense dialogue sequences reveal some added height in the surround channels. For those with home theater capabilities, you’ll find much to enjoy with the new 7.1 track. 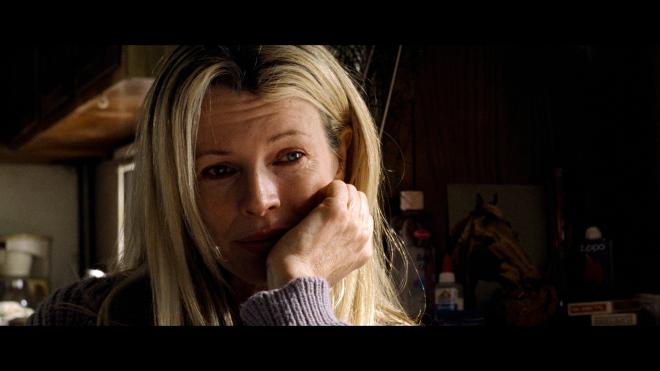 Okay, now for some disappointing news. Universal hasn’t added a single new special feature on the occasion of this 20th-anniversary release. They’ve carried over the few featurettes included on the 2009 Blu-ray, even though they are from SD sources and couldn’t be cleaned up any further. 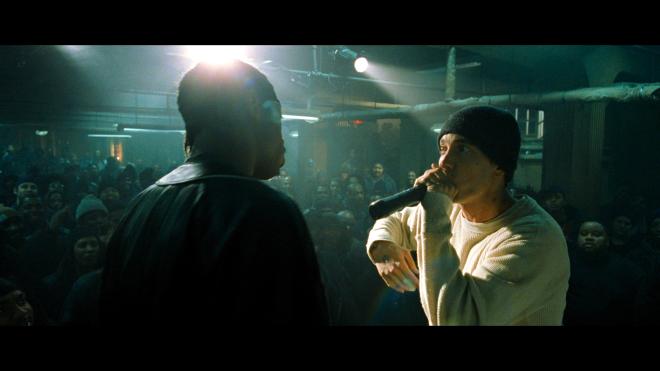 You’ve got one shot, one opportunity to release 8 Mile in 4K Ultra HD and while Universal’s two-disc release is rather bare given the film’s anniversary, the new 2160p presentation aided by HDR10 is worth celebrating. And for fans of the film, that may just be enough to upgrade the old VC-1 disc. This release is Worth A Look.