Although the scare factor has heavily waned over the decades, the original The Amityville Horror is nonetheless enjoyed today more for its nostalgia and for reliving some amusing childhood memories. Courtesy of Vinegar Syndrome, the cult horror classic haunts our Ultra HD home theaters with a shockingly beautiful, near-reference 4K HDR10 video, an excellent pair of DTS-HD MA tracks and a great mix of legacy and new supplements. Overall, the UHD package makes a Recommended addition to the 4K cult horror library.

It's funny how some movies you grew up remembering as really scary are actually not nearly as terrifying when you're an adult. After decades of watching hundreds more horror features with a fanboy passion since then, it probably shouldn't come as much of a surprise that the clout and effectiveness of The Amityville Horror has waned significantly. It endures largely from nostalgia and the belief that it's based on true events, despite having been proven a money-making hoax. Granted, the movie does bring memories of cowering under the sheets when the rocking chair moves by itself and yelling for George Lutz (James Brolin) to not return for the dog, but the once-great supernatural spookfest is ultimately quaint and dull, generating more feelings of gloomy melancholy than genuine scares.

Over the years and after many repeat viewings, the Amityville house is pretty much horror-less, especially with director Stuart Rosenberg (Cool Hand Luke) relying on swarms of flies, wind, and reaction shots to create a spine-chilling atmosphere. Admittedly, there remain a couple of moments of weird apprehension, like Amy's (Natasha Ryan) imaginary friend Jodie or Kathy's (Margot Kidder) growing fear of her husband's rage, but it still fails at capturing the imagination. Part of what now makes the production more of a somber and somewhat disheartening melodrama comes at the heels of watching My Amityville Horror with the real-life, middle-aged Daniel Lutz. It's an eye-opening documentary that reveals the real horrors within the family, outside the demonic spirits nonsense and focused on the personal trauma of abuse and psychological damage of unwanted notoriety on a child. 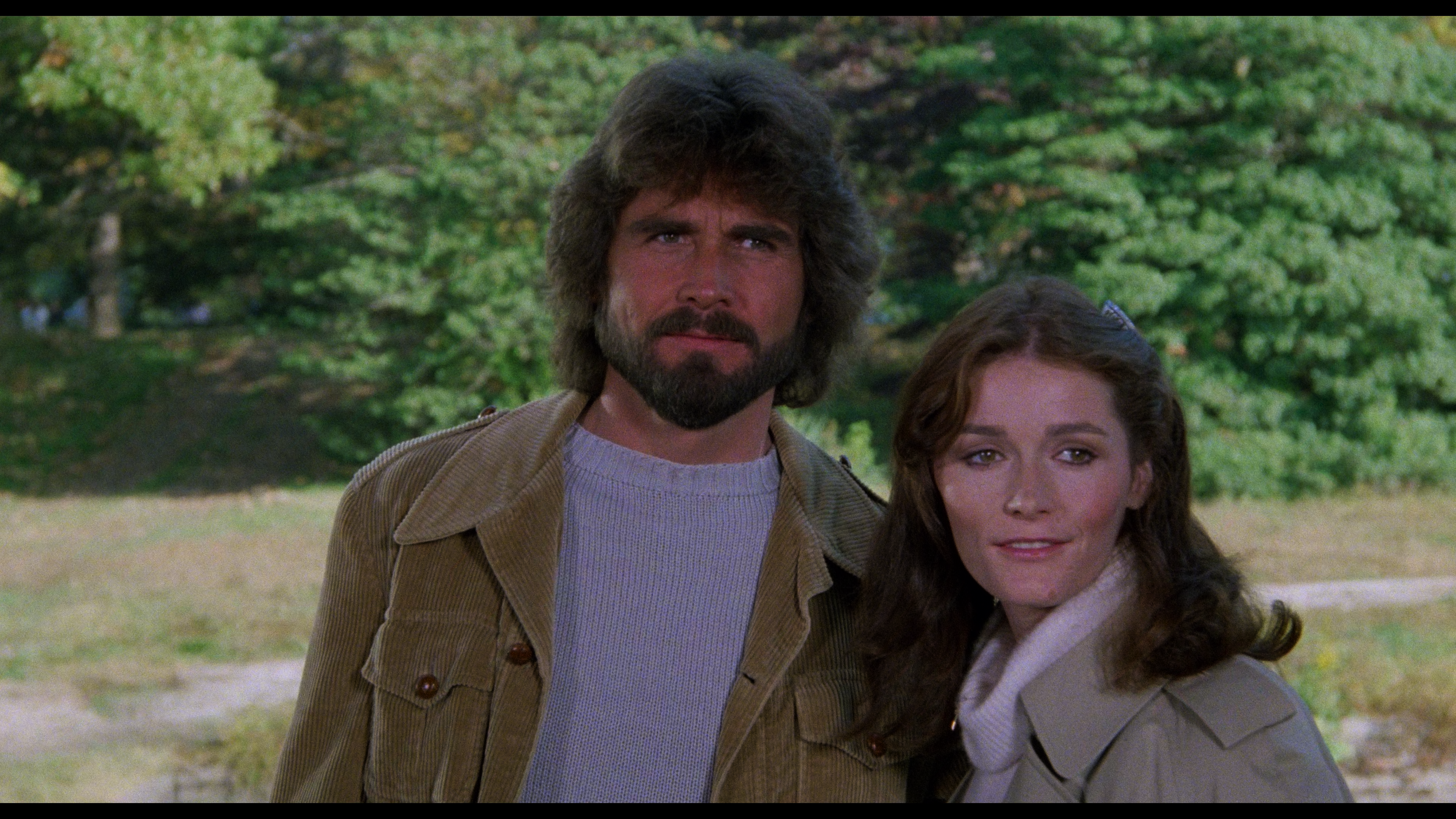 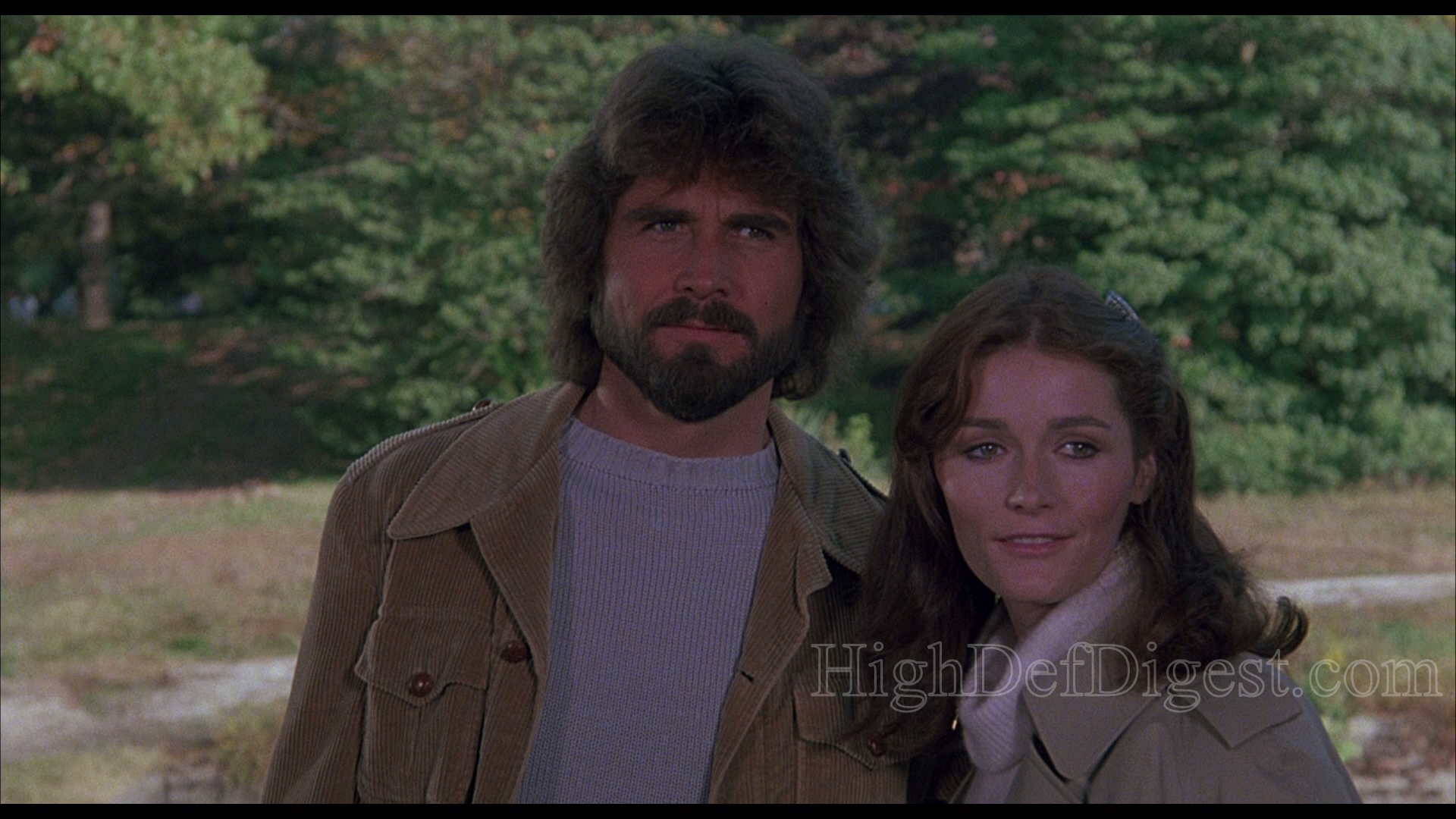 The only remaining strength of the plot, based on the best-selling book by Jay Anson, is witnessing George's spiral into uncontrollable anger and madness while struggling under the weight of monetary issues. Brolin delivers a convincingly frightening performance as a man slowly ripping apart at the seams. Then there's the haunting, almost iconic music of Lalo Schifrin, which succeeds at generating goosebumps better than the movie. At its worst and silliest, the house possesses an unusual animosity towards the Catholic faith, afflicting Father Delany (a forgettable Rod Steiger) in particular to the point of making him appear delusional. Someone should have asked which denomination the house preferred before moving in or inviting representatives from the wrong church.

We've covered 1979's The Amityville Horror for previously - check out our past reviews:

Vital Disc Stats: The Ultra HD Blu-ray
Courtesy of Vinegar Syndrome, The Amityville Horror haunts 4K Ultra HD Blu-ray as a two-disc package with a limited-edition slipcover. A Region-Free, triple-layered UHD100 disc sits comfortably opposite a Region A locked, BD50 copy containing a healthy selection of special features. Both discs are housed inside the standard black, eco-elite keepcase with reversible insert artwork and a sturdy cardboard slipcover. At startup, the disc goes straight to a static screen of the house with the usual menu options along the bottom and music playing in the background.

You can also order this title directly from Vinegar Syndrome 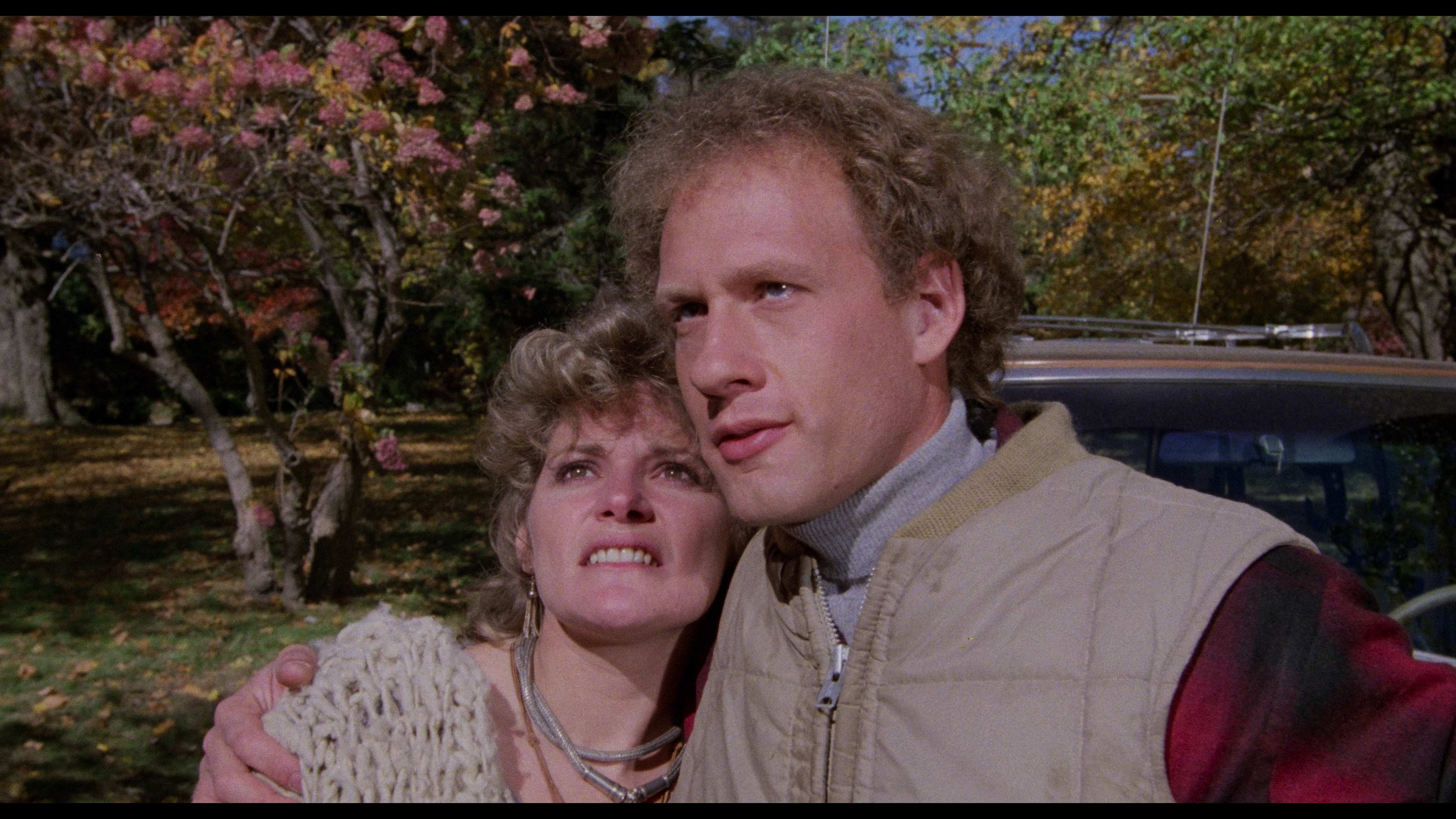 The horrors of the past infest our Ultra HD home with an outstandingly gorgeous, near-reference HEVC H.265 encode, kicking the disappointing Blu-ray from over ten years ago to the curb. Struck from a brand-new restoration and remaster of the original 35mm camera negatives, the native 4K transfer showcases distinct, sharp lines in the interior of the house, the well-defined stitching in the costumes and clean details in the surrounding foliage. Every piece of furniture and object decorating the background is plain to make out for a majority of the runtime. A few slightly softer moments do creep up from time to time, but that's to be expected in a movie of this vintage and are the result of the photographic techniques employed at that time. Overlooking that, the video is awash in a very thin layer of natural grain, giving the 1.85:1 image a lovely filmic quality.

The HDR10 presentation also comes with improved contrast and brightness balance, boasting cleaner, more brilliant whites and richer midnight blacks throughout. Shadow details are excellent with impressive visibility during the darkest, poorly-lit moments, and specular highlights are crisp and radiant with a tight, narrow glow from the hottest spots, supplying a lifelike sparkle from the sunlight against the water while still revealing the finer details. Most impressive still is the more full-bodied, animated array of colors, especially the sumptuous primaries energizing the surrounding foliage with life and vitality. Secondary hues are equally attractive, bathing much of the interior in warm yellows, homely marigolds, lively oranges and a slew of browns and sepias to really bring that gaudy 70s aesthetic to life.

All in all, the cult horror classic has never looked better and as beautifully rejuvenated as it does on Vinegar Syndrome's UHD edition. (HDR10 Video Rating: 92/100) 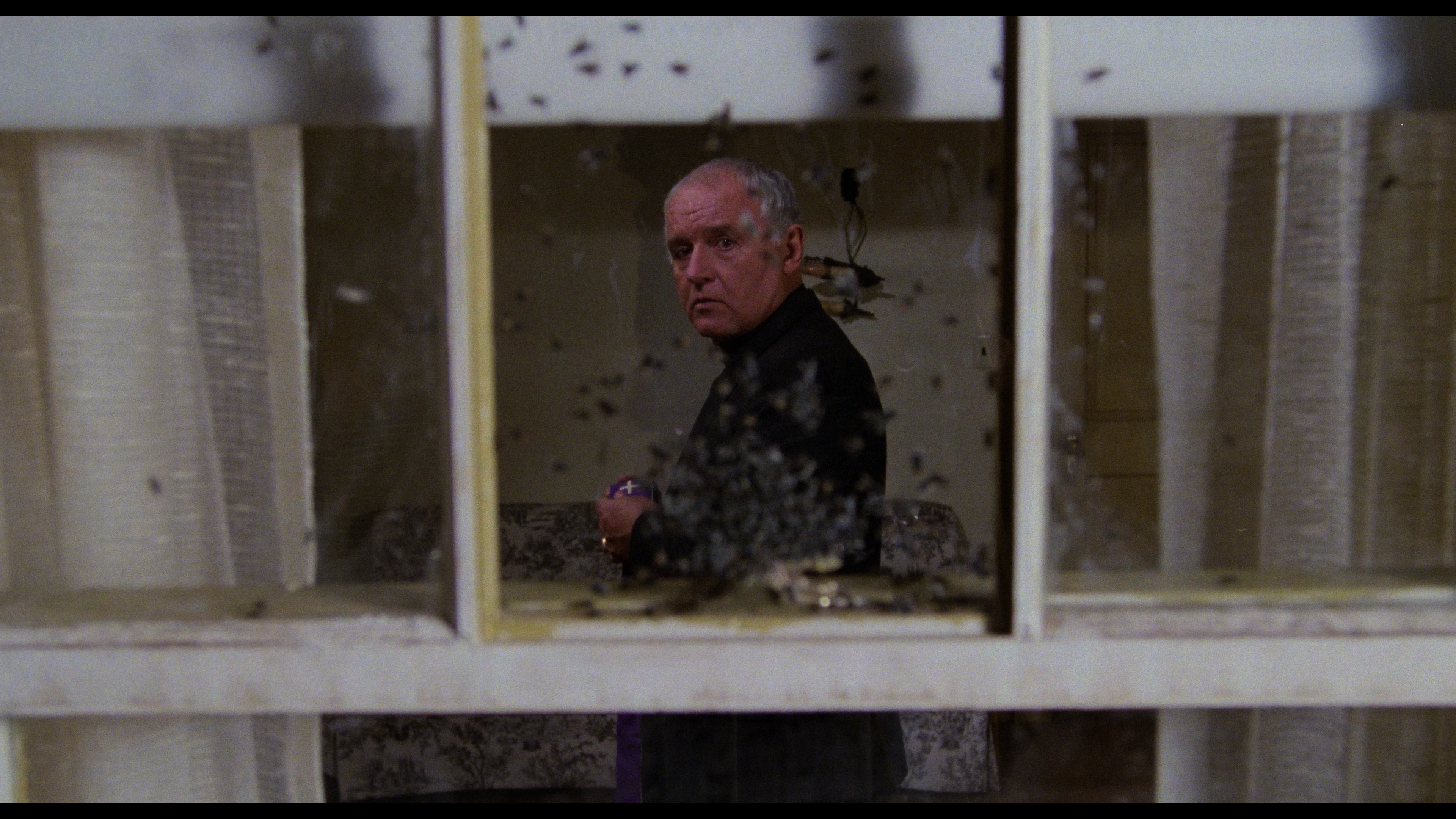 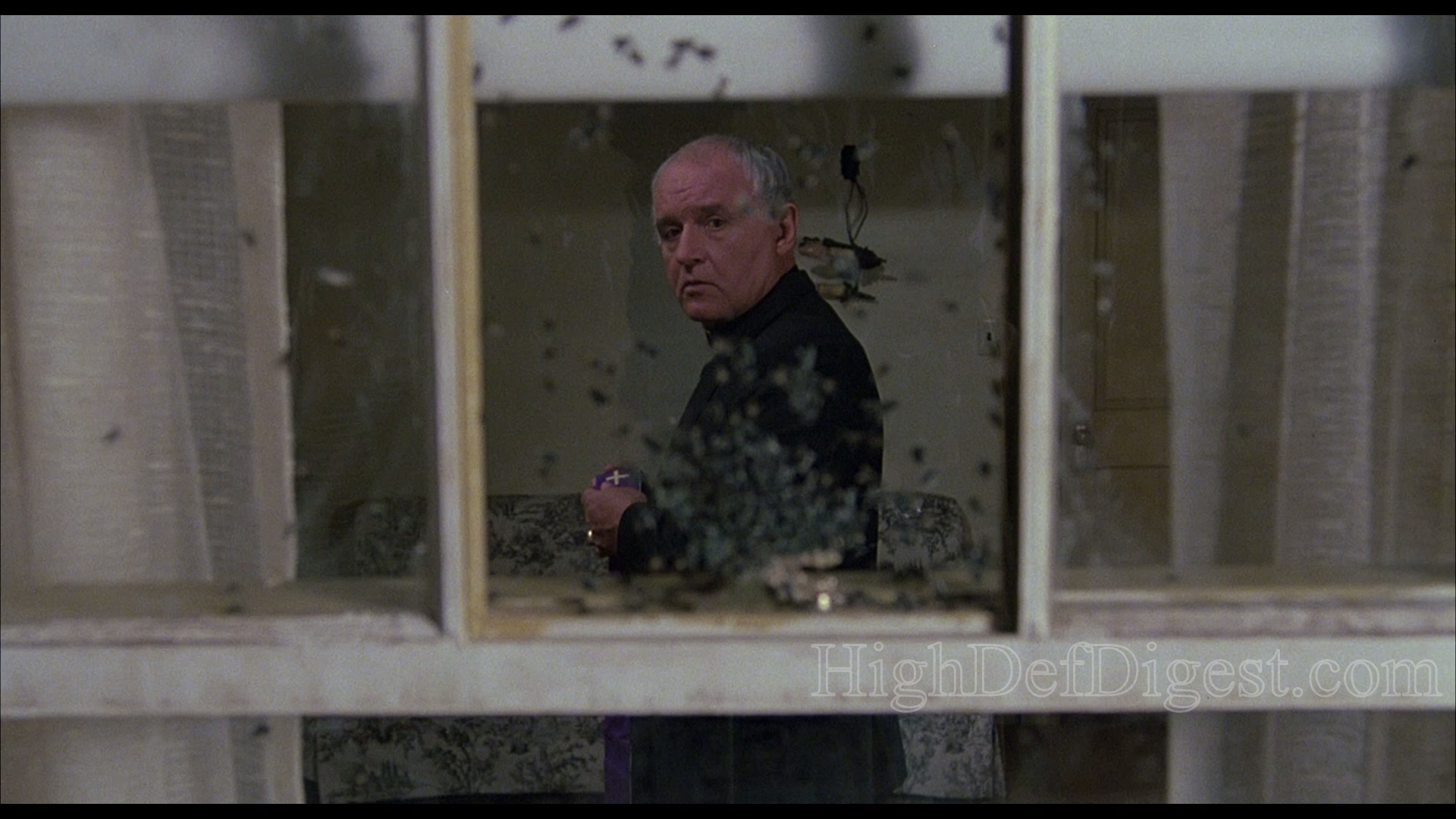 Like the video, the movie haunts home theaters with an improved pair of DTS-HD Master Audio soundtracks, giving fans the option to enjoy either an excellent 5.1 surround sound or a good 2.0 mono track. Surprisingly, the upmix version is the better of the two, exhibiting a cleaner and better-defined mid-range while imaging remains front and center with distinct clarity throughout, even during the loudest segments in the movie's climactic finish. For the most part, the rears are relatively quiet but occasionally employed for a few, select ambient effects, which are well-done and quite effective, such as the "Get out!" voice that suddenly spooks Father Delaney echoing all around the room. The low-end is arguably wanting in some sequences, but considering the movie's age and original recording, the bass is nonetheless adequate for what it is, providing some audible weight to the thunder. All the while, dialogue is very well-prioritized and intelligible from start to finish, making this new lossless mix a noteworthy step up from its predecessor. (Audio Rating: 80/100) 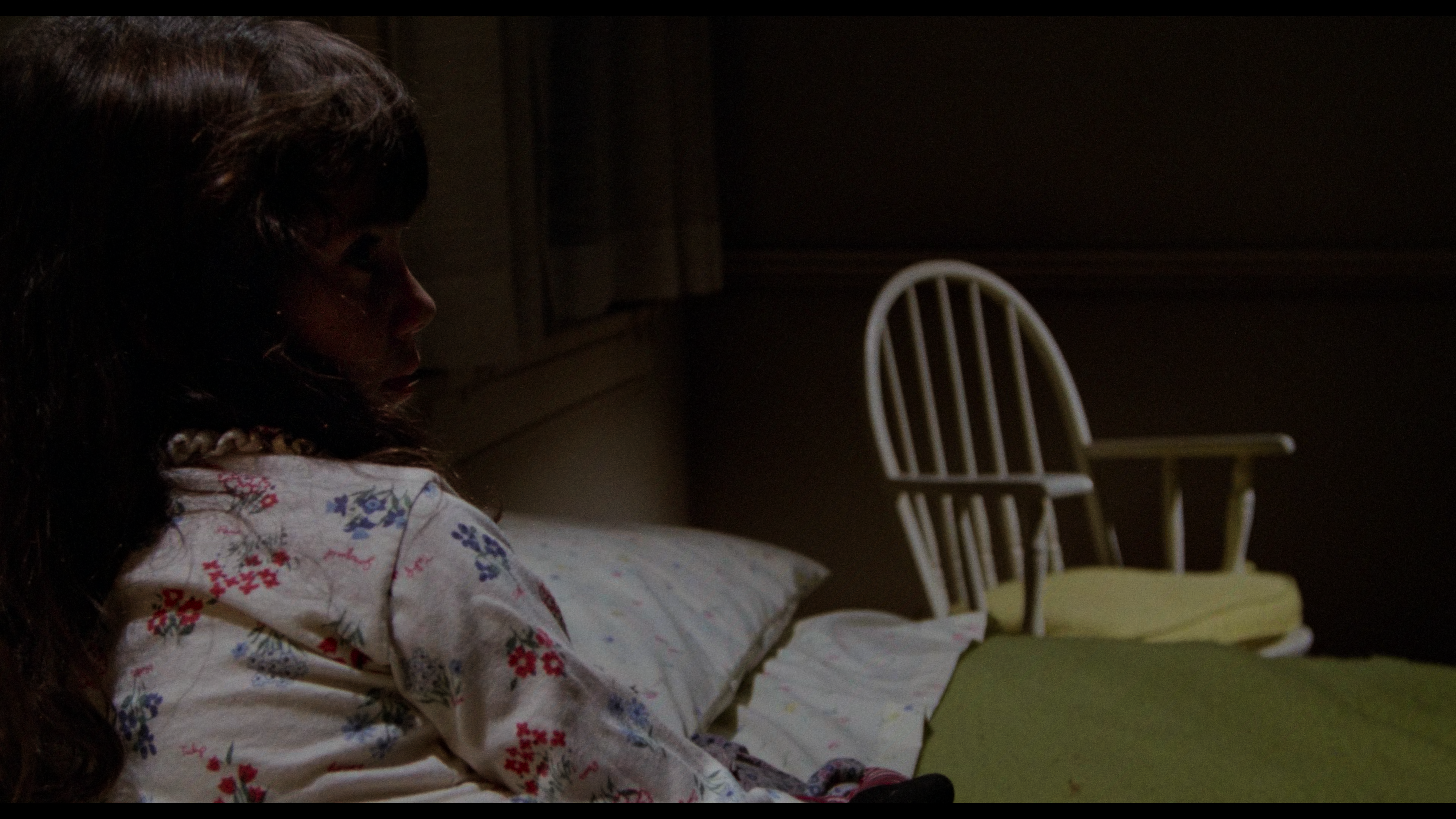 For this UHD edition, Vinegar Syndrome culls together the legacy supplements along with a nice selection of new bonuses, all of which are contained on the accompanying Blu-ray disc. 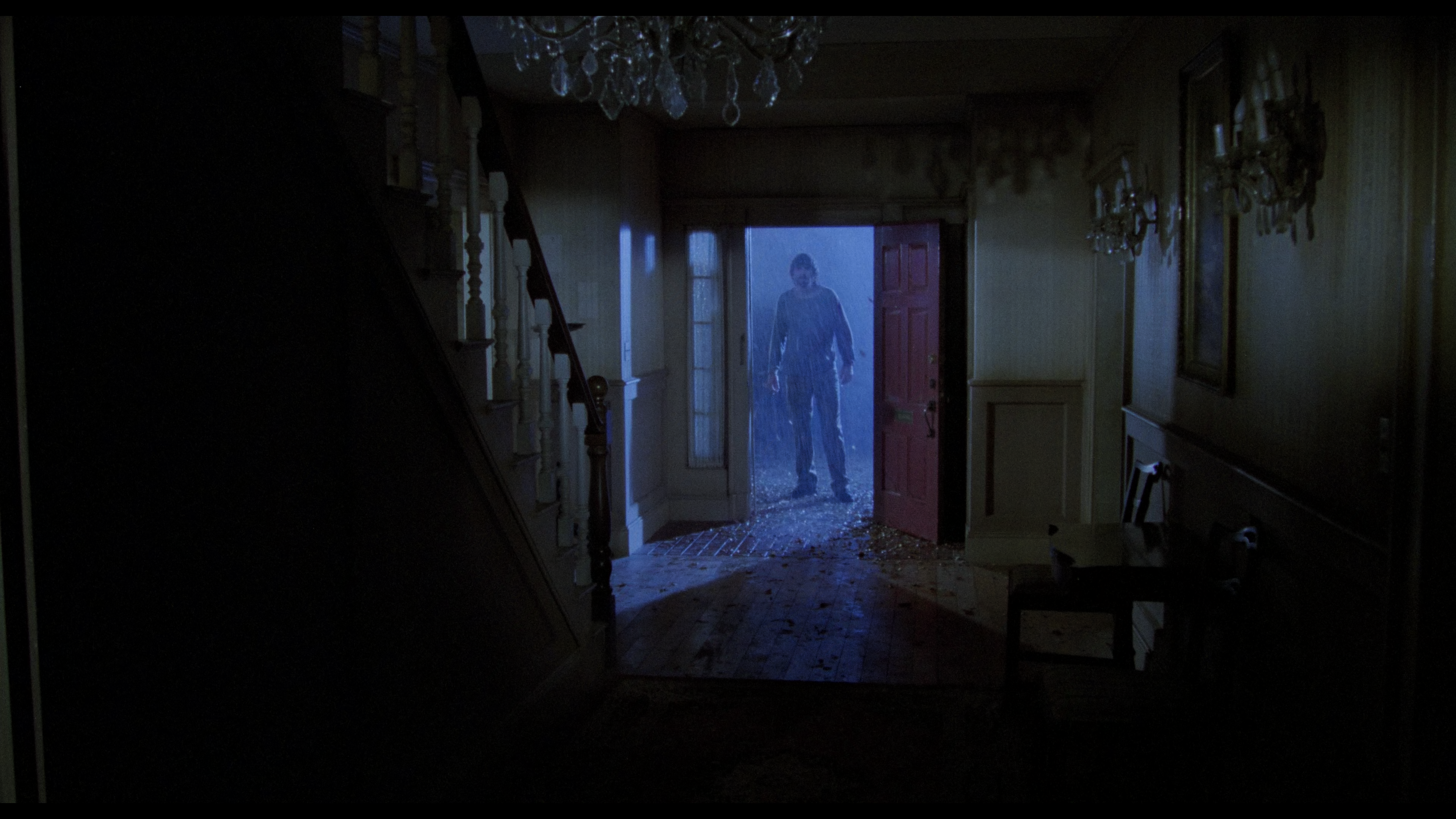 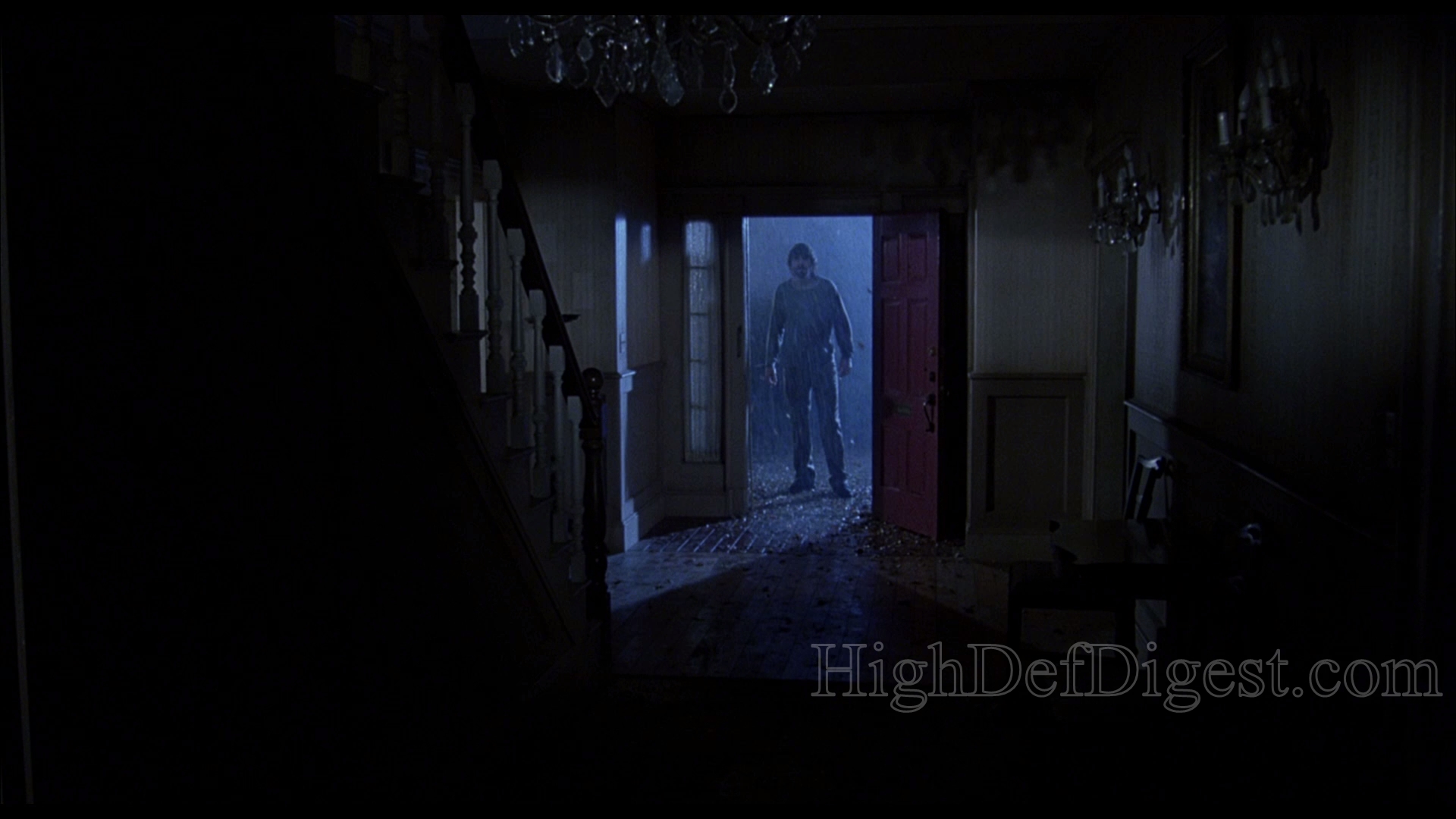 The original The Amityville Horror has sadly not-aged well over the decades, enjoyed today more for its nostalgia and for reliving some amusing childhood memories. Frankly, the movie is terribly lacking in genuine scares and a creepy atmosphere while also failing to tell a decently engaging story. After forty years, the horror is pretty disappointing but the nostalgia remains. Courtesy of Vinegar Syndrome, the cult horror classic haunts our Ultra HD home theaters with a shockingly beautiful, near-reference 4K HDR10 presentation and an excellent pair of DTS-HD MA soundtracks, offering fans a notable and worthwhile upgrade from its Blu-ray counterparts. With a great mix of legacy and new supplements, the overall UHD package makes a recommended addition to the 4K cult horror library.