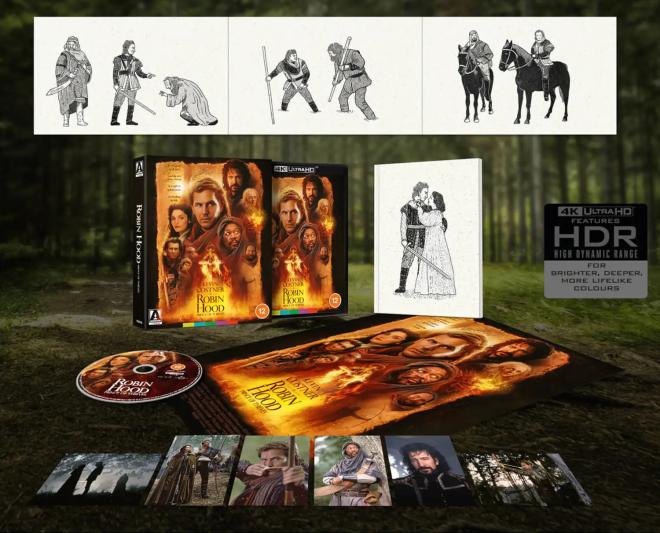 Sometimes the only way to uphold justice is to break the law.

From Errol Flynn to Disney, Hollywood has long been fascinated with the legend of Robin Hood. Helmed by director Kevin Reynolds (Waterworld, The Count of Monte Cristo), Robin Hood: Prince of Thieves pays homage to the past while transforming the famous outlaw of Sherwood Forest into a movie icon fit for the 1990s.

Robin of Locksley (Kevin Costner, Waterworld) returns from the Crusades to find his father dead and vows revenge. With his Moorish companion Azeem (Morgan Freeman, Unforgiven), he joins a band of peasant rebels to do battle against the wicked Sheriff of Nottingham (Alan Rickman, Die Hard) and win the hand of the fair Maid Marian (Mary Elizabeth Mastrantonio, The Abyss), cousin of the absent King of England.

This grand, swashbuckling adventure in the classic tradition is brought to life by an all-star supporting cast, including Christian Slater (True Romance), Brian Blessed (Flash Gordon) and a memorable cameo from Sean Connery (himself a former Robin Hood), plus an instantly recognizable score by Michael Kamen (Highlander) – not to mention a chart-topping Bryan Adams theme song. Robin Hood: Prince of Thieves dazzles in an all-new 4K restoration, accompanied by a king’s ransom of new and archival bonus features.