You’ve never seen anything…until you’ve seen The Incredible Melting Man! William Sachs’ tribute to EC horror comics and classic B-movie sci-fi may stretch its thin budget, but some excellent Rick Baker gore effects and a wry sense of humor save this thick goopy, sticky movie. Thanks to Vinegar Syndrome, The Incredible Melting Man revives from its out-of-print crypt fully formed for an impressive 4K Ultra HD Blu-ray presentation with clean audio and a nice selection of new and archival bonus features. For fans of the gnarly, weird, and just plain fun - Recommended

“Uh… did you get some crackers?”

Three astronauts are pioneers in the far frontiers of our solar system orbiting Saturn. When a solar flare exposes the crew to immense radiation, all but one dies. Back on earth he wakes up with a fractured memory and a condition where he’s literally melting away but has an insatiable craving for blood! On the loose free to murder and munch as he goes, Dr. Ted Nelson (Burr DeBenning) must now go find his former friend, the man he knew as Commander Steve West (Alex Rebar) - but the rest of us will know better as The Incredible Melting Man! 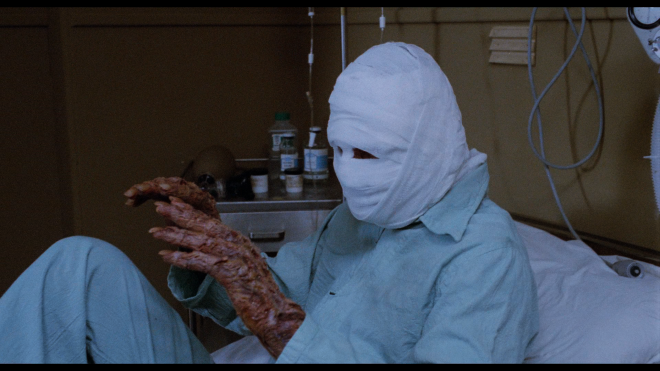 Written and Directed by William Sachs (Galaxina), The Incredible Melting Man works as a well-intentioned tribute to EC horror and sci-fi comics and classic 50’s B-movies. The premise is to the point, the setup is simple enough, and thanks to Rick Baker’s effects work, it has one hell of a monster! As a huge fan of this sort of B-movie silliness, I can’t ignore this movie’s faults. Performances are stilted, some of the dialog exchanges make little sense, and the pacing for an 86-minute movie can really drag in places. But thankfully a goofy sense of humor and a great third act pull the film together for a rousing goopy, gloopy, soupy finale.

A number of folks out there will know this movie better for its appearance on Mystery Science Theater 3000. I’ve been working to collect the films of various episodes unriffed over the last few years. In some movies, you can really see where that hilarious show really hit the film with the editing scissors to make it fit their style and runtime. In other films like The Incredible Melting Man, I was surprised to see how little was actually taken out! If you’ve seen the MST3k episode, you got most of the movie without many holes. The only missing bits are the particularly gory chunks and pieces of viscera and goop that wouldn’t make it past the broadcast censor boards.

As much as I dearly love The Incredible Melting Man for the hours of entertainment value it’s given me (riffed and unriffed), even I have to admit it’s a weird picture. I love the angle of an EC comic come to life, but its sense of humor is just plain odd. There are some jokes that land, but then there are others such as a gag involving a half-eaten turkey leg that just stalls the movie out cold. The strange conversation quoted above about crackers is another charming oddity. That interminable slow-motion shot of the nurse running away (presumably) from our Incredible (but slow-moving) Melting Man only to crash through a glass door is an early hilarious highlight that more or less sets the tone of the film. If you’re hooked by that silliness then you’re ready to go for the rest of the show.

Far from the greatest monster picture ever made, it’s also far from the worst. Riffed or unriffed or just jabbered at by you and your semi-inebriated friends, this flick is a good time. It’s low-budget madness at its finest. It may not quite be the film Writer/Director William Sachs set out to make – listen to his great audio commentary for more about that – but it’s competently produced, decently executed, with one hell of a great drippy sloppy monster! 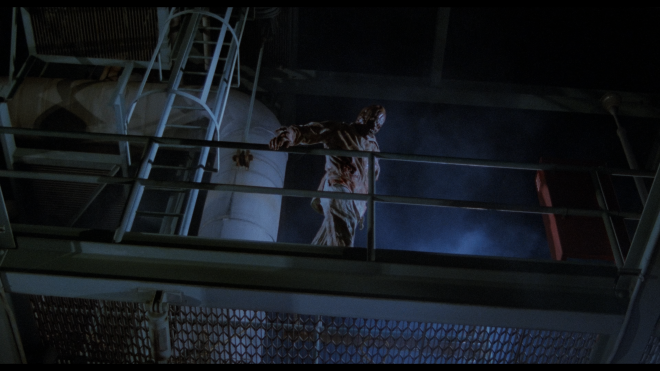 Vital Disc Stats: The 4K Ultra HD Blu-ray
The Incredible Melting Man reconstitutes himself and solidifies onto a new two-disc 4K Ultra HD Blu-ray set from Vinegar Syndrome. Previously released by Scream Factory, that disc long ago went out of print along with the Mystery Science Theater 3000 DVD set that featured that episode. This is a welcome return for ol’ goop face! The 4K presentation is pressed on a Region Free BD-66 disc. The new 1080p is a Region A BD-50. Both discs are housed in a standard black case with new custom artwork and an identical slipcover. The case has reversible insert artwork depicting the classic poster art. Both discs load to animated main menus. 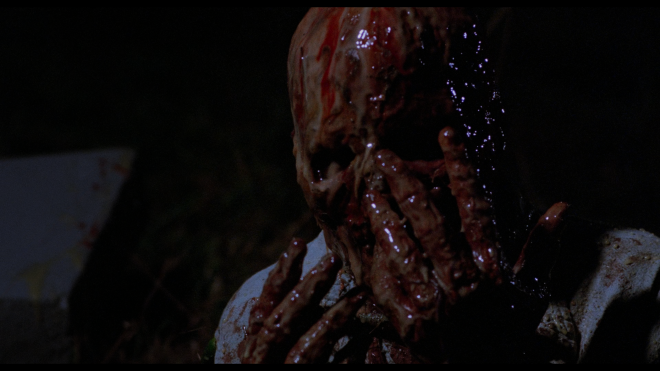 With a return to disc, The Incredible Melting Man scores a welcome 4K Ultra HD Blu-ray upgrade. This isn’t a very flashy movie with sharp style or visuals - but this is a very fleshy movie and the extra detail and impressive restoration work come in handy for this 1.85:1 2160p HDR10 transfer! For the low budget, the era it was shot, etc. – this movie was never one to look overly stunning or groundbreaking visually. It’s actually a pretty flat film with actors and objects content to occupy that three-quarter space. The draw of the film really is Rick Baker’s visual effects and they look fantastic.

The previous Scream disc was impressive when well-lit, but usually, the best-lit scenes were the boring domestic bits and not when Mr. Melt was on screen. That’s the biggest gain I can see here for this new disc. The last third of the film is shot in near total darkness with minimal light sources, but now you can actually fully appreciate fine details, production values, and the makeup work. In past releases when the late Jonathan Demme shows up, you could barely tell it was him. Now in those brief moments, you can actually see his face clearly. Likewise, when Mr. Melt attacks Demme’s girlfriend through the window for that Night of the Living Dead nod; you can now fully enjoy that gnarly arm! 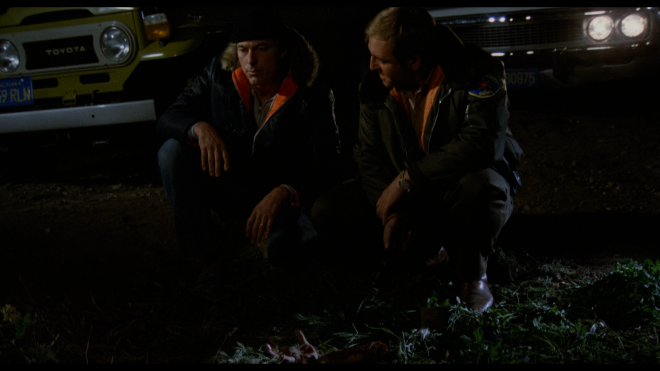 HDR grading has been a big help in that department, mitigating the overly dark scenes and keeping black levels nice and inky without getting so dark you can’t see what the hell is going on. Colors are bold and robust with plenty of bright vivid primaries and natural skin tones. And flesh tones for that matter… Elements are in overall excellent shape. Problem bits that existed before are still present, mostly involving the stock footage and then the flicker effect seen in slo-mo shots. A few pieces around transitions and establishing shots are a bit grittier with some speckling but nothing overly serious. All around this is a welcome upgrade for this moist monster movie. 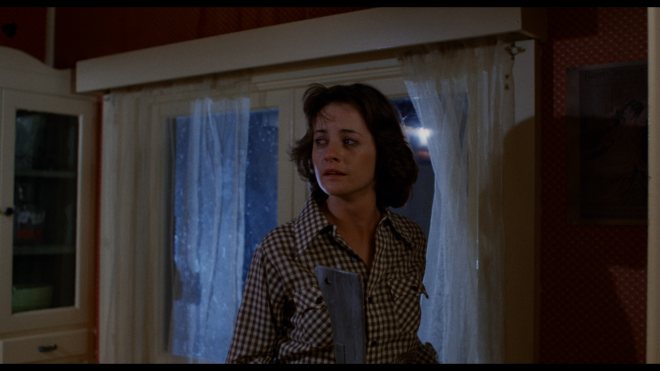 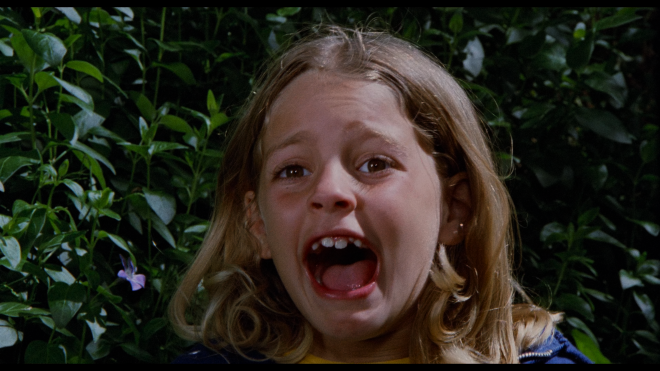 This release also features a DTS-HD MA 2.0 mono track for both the 4K and Blu-ray versions. I sadly can not locate my Scream Factory disc for a direct comparison but this is a fine track. It was never an overly inventive sound design to start with so there’s not much to upgrade to with this one. The score by Arlon Ober is actually kind of plucky and cute a lot of the time - but when Mr. Melt shows up, it kicks in nicely and fills out the soundscape. Dialog is clean throughout without issue, although ADR or looped dialog is pretty obvious sounding. Hiss, scratches, or other issues are absent for a clean track. 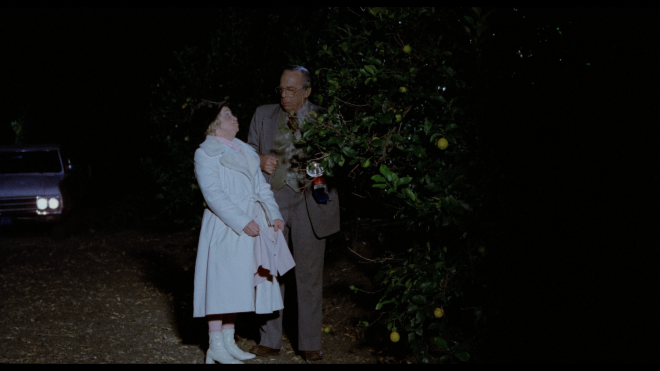 Not to outdo themselves, Vinegar Syndrome packs most of the previously released bonus features while giving this disc a couple of extra goodies to munch on. At the top of the pile is the great William Sachs audio commentary. He flies solo here and he gives certain scenes he really enjoys a stretch of silence to soak them in, but otherwise this is a fully-engaged, informative, and often funny audio commentary. After that, we get a brand new half-hour interview with Sachs that's just as entertaining as the commentary. We also picked up a new interview with Sandy King who served as the movie’s Script Supervisor. The only thing missing from the past disc is the radio spot, so not a big loss in the end. 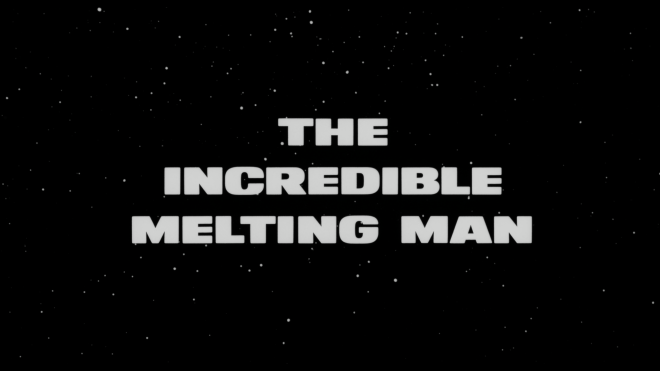 The Incredible Melting Man is classic low-budget sci-fi monster mayhem at its finest. The draw of the film is the titular drippy creature brought to life by Rick Baker, but the show as a whole is wildly entertaining even if its sense of humor is odd or misplaced. Even for such a relatively short film, some stretched can drag. However, that can actually lead to some hilarity if you're feeling witty. Whether you’re watching it straight, riffed, or with a gaggle of friends, it’s an overall fun flick that delivers on its concept. After going out of print, it’s nice to see this movie on disc again - and looking better than ever.

Vinegar Syndrome reconstitutes The Incredible Melting Man for a new two-disc 4K Ultra HD Blu-ray release. Sourced from a new 4K restoration, the HDR10 transfer is generally very good, allowing fans of this fleshy flick to fully appreciate the incredible makeup work and the hapless humans caught in the monster’s path. Audio is clean and effective while the bonus features package is informative with some new interviews to spice up the mixture. If you’re a fan of slippy sloppy monster flicks, this movie will treat you just fine. Recommended.