After countless viewings, Joel Schumacher's The Lost Boys is a personal favorite that continues to entertain although the 80s cult horror classic remains very much a product of its time. Still, the story is a surprisingly thoughtful and insightful allegory for those awkward teen years. Celebrating its 35th anniversary, Warner Home Video welcomes the vampire favorite to Ultra HD with an astonishingly good 4K video, an excellent DTS-HD MA track but ports over the same special features as before. Nevertheless, the UHD package is a Highly Recommended addition to the 4K horror library.

From the first moment I saw Joel Schumacher's The Lost Boys, I instantly fell in love with the horror flick about vampire teens attempting to recruit the new kid in town. For me, that was the hook into the drama, the action, the supernatural atmosphere . . .  and the oh-so-80s rock star fashion. That's what immediately sold me because, at the time, I could easily relate with both Micheal (Jason Patric) and Sam (Corey Haim) moving into a new town after their parents divorced and the now-single mom Lucy (Dianne Wiest) is busy with a job, as well as the dating world. As the new kid, the brothers set out to make friends and check out the lay of the land, know where all the cool events are and the places to hang out in a place infamously known as the murder capital of the world, Santa Carla. And as is often the case, they make arguably poor choices in friends, more so in the case of Michael than in Sam, who awkwardly befriends the Frog brothers, Edgar (Corey Feldman) and Alan (Jamison Newlander).

For Michael, he is sucked (no pun intended) into a gang of rebellious hoodlums led by the handsomely stylish David (Kiefer Sutherland), and a case could even be made that Michael was actually seduced Star's (Jami Gertz) come-hither charm. This was what made the biggest impression during my formative pre-teen years because like Michael, I was also hanging out with the wrong crowd with initiation rituals and expectations of joining for life. The only difference, of course, was that David's proposal was far more enticing: never grow old and never die. Then, there are also the homoerotic undertones in a story where the teenager Michael, just as he is coming to a sexual awakening of his own, is arguably seduced by the bad-boy David just as much by Star. And that's just another layer to an awesome 80s horror classic that uses the vampire mythos as an allegory for those awkward teen years and the internal struggle during that fragile stage where we are trying to figure out who we are and the person we wish to become.

After four decades and countless viewings, The Lost Boys remains a personal favorite that I can still watch and adore with the same level of admiration as I did when I was a teen. 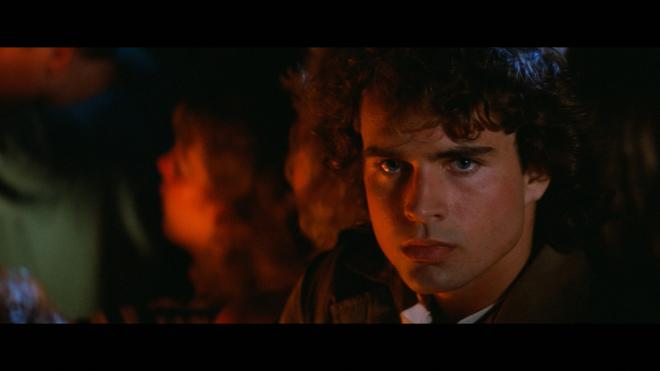 Vital Disc Stats: The Ultra HD Blu-ray
Celebrating its 35th anniversary,  Warner Home Video brings Joel Schumacher's The Lost Boys to 4K Ultra HD Blu-ray as a two-disc combo pack with a flyer for a Digital Copy. When redeeming said code, owners are granted access to the 4K UHD version with Dolby Vision and Dolby Digital Plus 5.1 audio. The dual-layered UHD66 disc sits comfortably opposite a Region Free, BD50 disc, and both are housed inside a black, eco-elite case with a glossy slipcover. At startup, viewers are taken to a generic static screen with usual options along the bottom and music playing in the background.

Vampire teens turn Ultra HD into one of them with an astonishingly good, near-reference HEVC H.265 encode, offering a notable step-up from the previous Blu-ray release. Reportedly struck from a fresh remaster of the original 35mm camera negatives, the HDR10 presentation boasts a vibrant, flamboyant collection of primaries, particularly the wide selection of reds and blues. The daytime scenes are also bathed in a sumptuous array of neon pastels, like the fuschia pinks in the 80s outfits and the various browns of grandpa's house, while the nighttime action is swimming in magentas, violets, warm golden yellows and spirited fiery oranges with the boardwalk night concert being a demo-worthy highlight. Facial complexions appear more natural and accurate to the climate with peachy-rose tones in the cast and lifelike textures that reveal pores, the smallest wrinkles and negligible blemishes in the cast.

All the while, a spot-on contrast balance washes the visuals in clean, brilliant whites, from Star and Lucy's clothing to the lighting and fluffy clouds in the sky. Specular highlights furnish a crisp, narrow glow around the hottest spots, allowing for better clarity within the lights fixtures and flashlights, while various metallic surfaces and the vampire blood come with a radiant, realistic sparkle that glistens in the sunlight. Black levels are also richer and accurately rendered, providing the 2.40:1 image with an attractive cinematic appeal. Shadows penetrate deep into the screen to give the action some appreciable depth, and visibility within the darkest, murkiest corners is mostly strong throughout. However, there are a few moments of very mild crush here and there, such as in Micheal's sweater in the film's second half, looking like a giant black blob for a good chunk of the time and washing over the finer details and stitching.

Although not always consistent, the native 4K transfer debuts with outstanding definition and clarity for a majority of the runtime. This is most apparent during daylight sequences where we can make out the tiniest imperfection of grandpa's house, the small pebble in the road and the distinct leaves in the surrounding foliage. Individual hairs and whiskers in the cast and taxidermy animals are razor sharp, and every nook and cranny of the house is revealed. Nighttime scenes are just as detailed for the most part, like the aforementioned boardwalk concert or inside the vampire lair, and the faded creases and wrinkles in the leather jackets are very well-defined. There are the occasional soft sequences sprinkled throughout, which should be expected and inherent to the original stylized photography. But overall, this is the best the movie has ever looked on any home video format, awash in a fine, thin layer of natural grain that is consistent and furnishes the presentation with a gorgeous film-like appearance. (HDR10 Video Rating: 92/100)

Although there is no official word of the original stereo audio being remastered along with the video, the 80s horror favorite is nonetheless welcomed into home theaters with an excellent DTS-HD Master Audio 5.1 soundtrack. Compared to its Dolby TrueHD counterpart, this new lossless mix shows a few noteworthy improvements, starting with a better and more balanced background activity moving between the three fronts to create a more engaging and broad sense of presence. When applying the receivers' Auro-3D up-mixing functionality, some of the most atmospherics convincingly but also subtly expand into the top heights and surrounds without losing the original front-heavy presentation, generating a highly-engaging soundstage. An improved, more well-defined mid-range exhibits clean distinction and separation in the upper frequencies, maintaining outstanding clarity during the loudest segments and in the variety of song selections. Dialogue reproduction is crystal-clear and well-prioritized above the action from start to finish while a solid, hearty low-end provides the visuals and music with ample and weighty bass, making for a great listen at home. (Audio Rating: 84/100)

For this UHD edition, the same set of bonus features are ported over and contained on the Blu-ray, but the audio commentary is shared between both discs.

After 35 years and countless viewings, Joel Schumacher's The Lost Boys is a personal favorite that continues to entertain and remains as much loved today as the first time I watched it. Admittedly, the 80s cult horror classic is very much a product of its time, but the story is surprisingly thoughtful and insightful that uses the vampire mythos as an allegory for those awkward teen years. Celebrating its 35th anniversary on 4K Ultra HD, the vampire favorite is welcomed to home theaters with an astonishingly good HDR10 presentation and an excellent DTS-HD Master Audio soundtrack, offering an awesome upgrade from its Blu-ray counterpart. Porting over the same special features as before, the UHD package nonetheless makes for a highly recommended addition to the 4K horror library.