Reuniting Sam Neill, Laura Dern, and Jeff Goldblum for one final outing, director Colin Trevorrow steers the presumably final franchise installment Jurassic World Dominion to success as a decently amusing and fitting conclusion. Starring Chris Pratt and Bryce Dallas Howard, the fifth sequel is spectacular popcorn escapism that takes precedence over strong or even good storytelling but is ultimately forgettable as a lame attempt to capture the nostalgia of the original. The summer blockbuster debuts on 4K Ultra HD with a spectacularly gorgeous Dolby Vision HDR presentation, a monstrous reference-quality DTS:X track but a rather puny selection of supplements. Nevertheless, the UHD package comes Recommended for completists and makes for a strong addition to the 4K HDR library.

The one persistent and coherent theme at the root of all the Jurassic Park features is humanity versus nature and its arguably hard-wired desire to have dominion over it. In the latest and presumably final installment to the massively popular franchise, Jurassic World Dominion, director Colin Trevorrow has essentially brought that theme to the forefront with rather heavyhanded glee in the overtly villainous Dr. Lewis Dodgson (Campbell Scott). A curious amalgamated caricature of Tim Cook, Elon Musk, and other powerful corporates spearheading the world's technological advancements, the plot, which Trevorrow co-wrote with Emily Carmichael and based on a story with Derek Connolly, leaves little room for subtlety, placing the eccentric CEO of Biosyn Genetics at the center of all that goes predictably wrong in this sixth entry. The only shades of grey and substance are on the shoulders of geneticist Dr. Henry Wu (BD Wong).

On the other hand, the moral dilemma Wong's character grapples with provides little substance to an otherwise hollow story that imagines dinosaurs roaming Earth once more after the events of its predecessor while a swarm of prehistoric locusts infects farmlands, threatening the world's food supply with an agricultural collapse. As though ripped from the conspiracy theory fears of the Monsanto Company, Wu's desire to devise a pathogen to combat his transgenic bugs by studying Maisie (Isabella Sermon) also ineptly introduces a redemption element to the sci-fi adventure, which admittedly was brazenly and loudly trumpeted in the early moments by Bryce Dallas Howard's Claire and her ragtag crew of dino activists (Justice Smith and Daniella Pineda). It's further flagrantly broadcasted in veteran Air Force pilot Kayla Watts (DeWanda Wise), whose only forced connection in this sequel is casually witnessing Maisie's kidnapping. 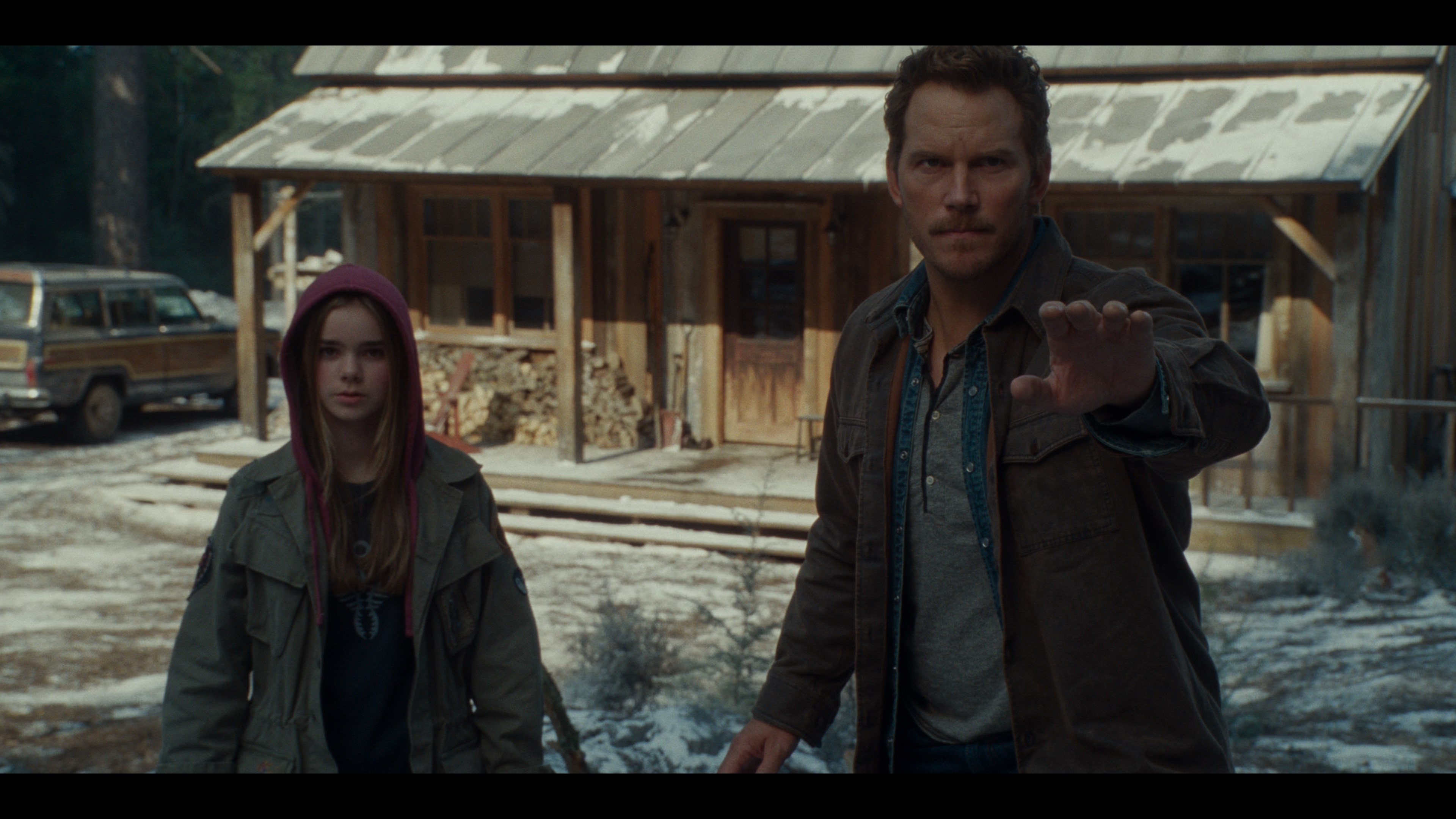 With everyone else enjoying some semblance of motivation and possible arc, Chris Pratt's Navy veteran and raptor trainer Owen Grady is placed in the rather dodgy predicament of trying to figure out where he fits in the conspiratorial tale, of where his laughable talent for extending an arm out to confuse Velociraptors might actually come in handy. Of course, Trevorrow finds a way, which simply amounts to being a silly trick that evidently impresses Dr. Alan Grant (Sam Neill) and is eventually practiced by Maisie when handling Beta, daughter of Owen's raptor Blue. Ultimately, both characters, which are arguably the established figureheads of the franchise, don't offer much to the proceedings other than play reluctant heroes when convenient. All the while, Neill more often functions as an "old man yells at cloud" meme, crabbedly reacting to the ever-changing and rapidly-evolving world that continuously makes him feel like an extinct species.

However, in spite of all these narrative blunders, Jurassic Park Dominion still manages to be a decently amusing and fitting conclusion that falls in line with the previous two entries where the visual spectacle takes precedence over strong or even good storytelling. Although not as successfully accomplished as Trevorrow and his team aspired, the characters also contend with learning to live in harmony with the dinos rather than dominate or control unruly nature. But then again, much like everything else in this production, those sentiments largely feel just as obligatory and contrived as the appearance of paleobotanist Dr. Ellie Sattler (Laura Dern) and the still-suave mathematician Dr. Ian Malcolm (Jeff Goldblum), brought in ultimately as devices to incite the plot's central conceit about corporate greed and the ethical quandaries behind biotechnology. Even in its rather silly attempts to stoke the nostalgic heartstrings of the audience, the fifth sequel does close to nothing in elevating itself from being forgettable popcorn escapism. 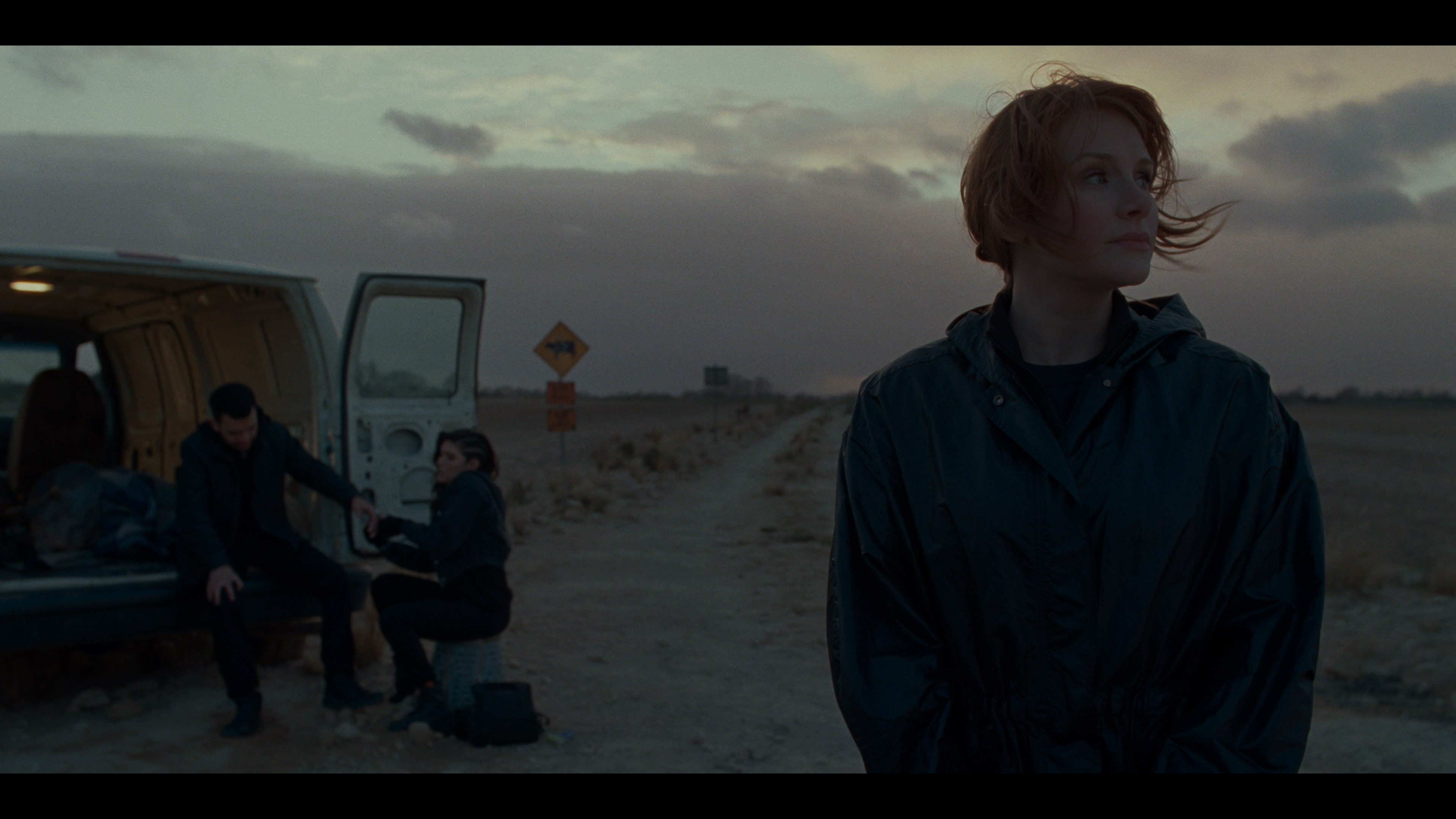 Vital Disc Stats: The Ultra HD Blu-ray
Universal Studios Home Entertainment brings Jurassic Park Dominion to 4K Ultra HD Blu-ray as a two-disc combo pack with a Digital Copy code. When redeeming said code, users have access to the 4K Dolby Vision version with Dolby Atmos, which includes the "Extended Version" as a featurette. The triple-layered UHD100 disc sits comfortably opposite a Region Free, BD50 disc inside a black, eco-elite case with a glossy, lightly-embossed slipcover. The UHD disc also includes the 161-minute extended cut of the movie, which adds fourteen minutes of character development and some action filler that surprisingly work to the movie's benefit. It doesn't dramatically improve the story, but the added dialogue supplies some needed context and exposition. At startup, the disc goes straight to a menu screen with the usual options along the left side, full-motion clips, and music playing in the background. 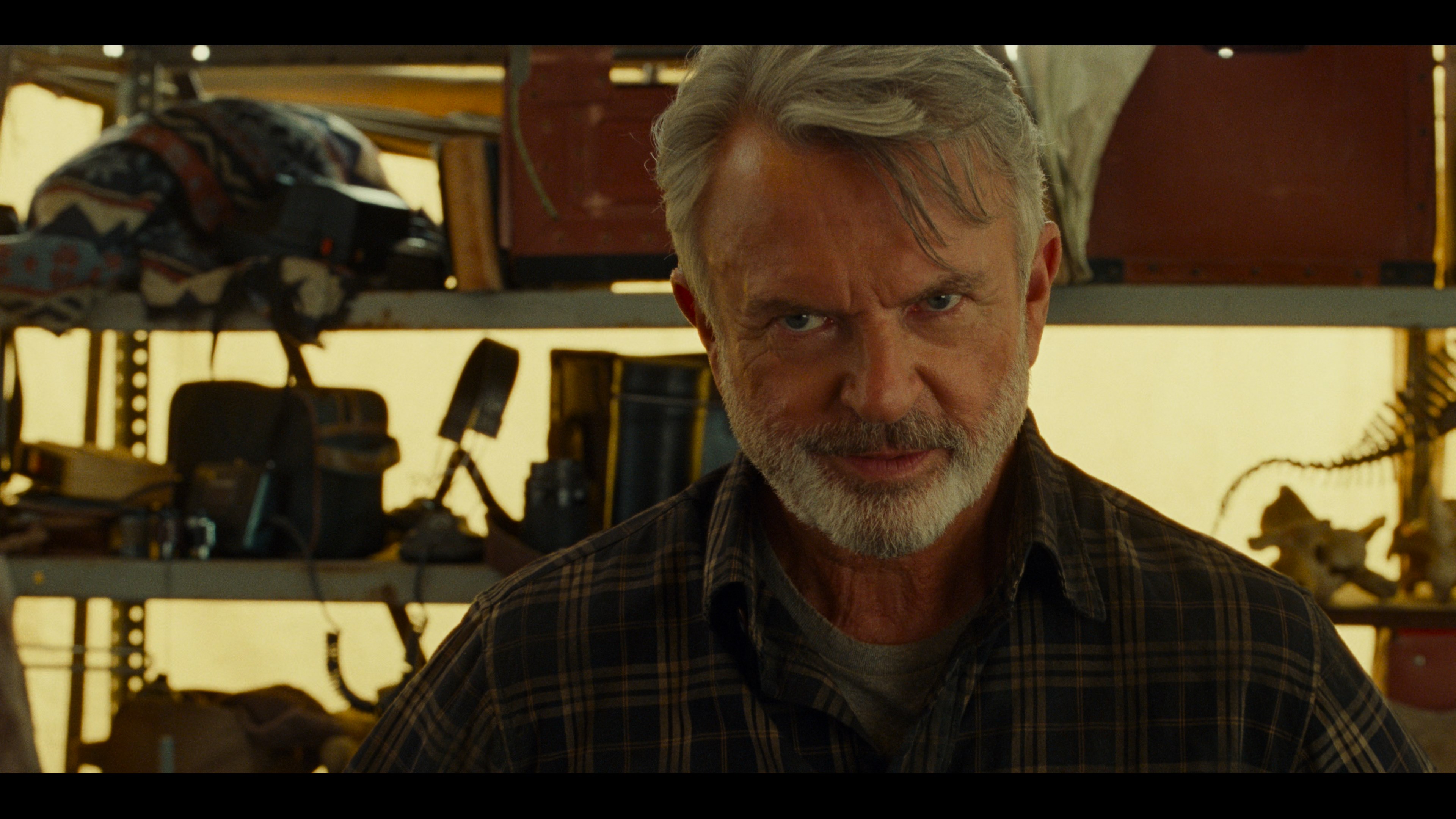 The final chapter in the decades-long dino saga claims dominion over 4K Ultra HD with a top-notch and eye-catching HEVC H.265 encode. Shot on a combination of traditional 35mm, 65mm and 8K digital cameras, the native 4K transfer sports exceptional clarity and definition from start to finish although a few CG sequences seem to dip in some spots and can look a tad softer than others. Nevertheless, the individual hairs and whiskers of the cast are distinct, the stitching in the costumes are discrete, and the surrounding foliage of the Biosyn Sanctuary are highly-detailed. Even the many fast-paced action scenes maintain impressive clarity, and facial complexions are always revealing with lifelike textures exposing minute, negligible blemishes. A consistently thin layer of natural grain is also present throughout, providing the 2.00:1 image with an attractive film-like quality that videophiles are sure to appreciate.

The Dolby Vision HDR presentation comes with a somewhat subdued and restrained contrast balance, supplying the action with an interestingly grey, dreary appeal, but whites are nonetheless clean and brilliant, allowing for exceptional visibility into the far distance. Likewise, specular highlights seem fairly controlled yet display a crisp, radiant glow in the hottest areas, like light fixtures, without ever washing over the finer details while metallic surfaces and computer monitors have a tight, snappy sparkle. Black levels are silky rich with outstanding gradational differences between the various shades while dark, velvety shadows penetrate deep into the screen, furnishing the visuals with a lovely three-dimensional appeal and excellent detailing within the darkest, murkiest corners of the frame. The palette appears to be affected by the stylized photography, but overall, primaries are accurately rendered and dynamic while favoring the warmer colors, bathing much of the action in fiery oranges, deep golden yellows and striking amber hues. All the while, faces are always natural with a healthy, peachy-rose tone in the cast. (Dolby Vision HDR Video Rating: 94/100) 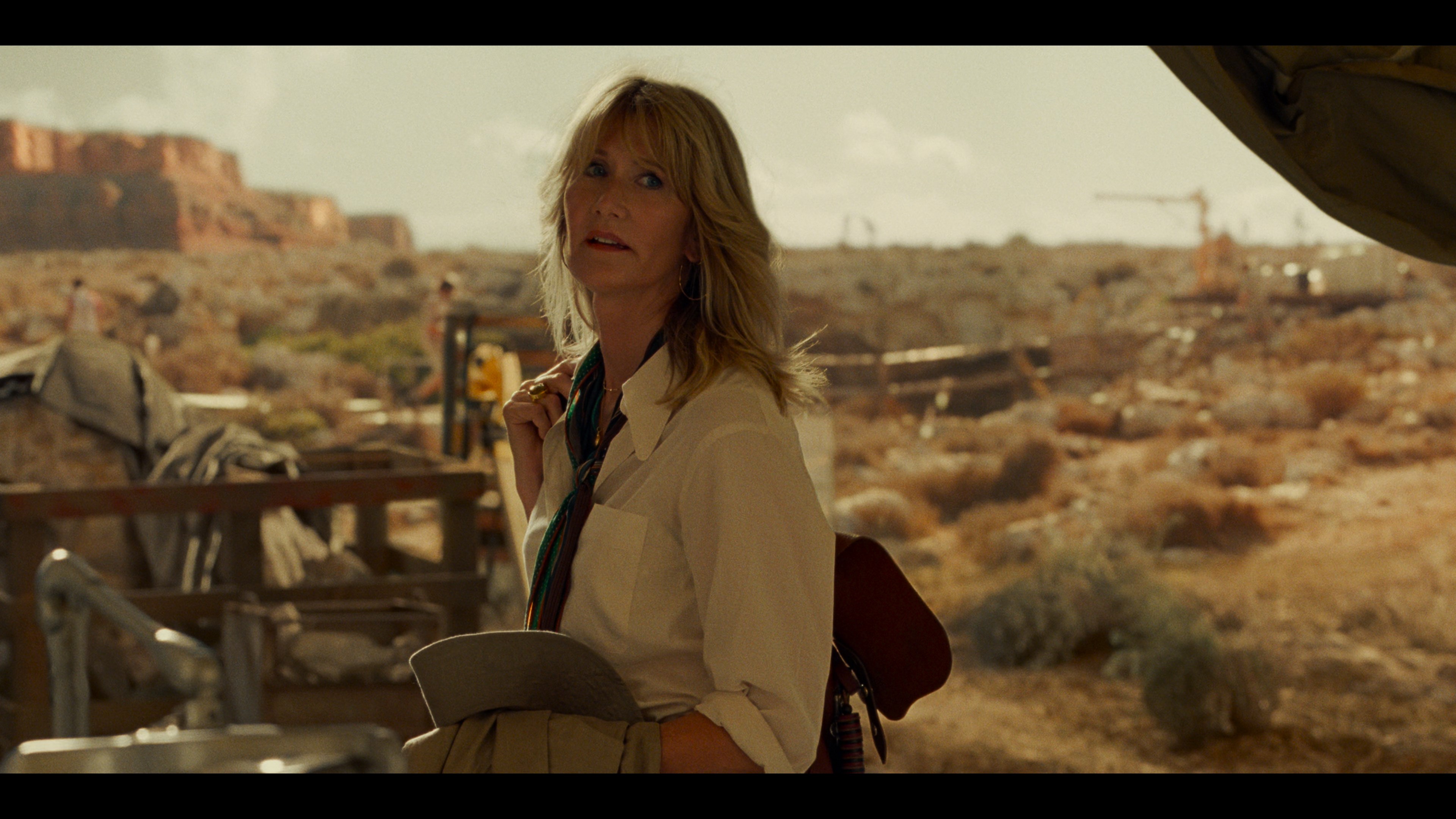 The latest installment roars into home theaters with a monstrous, reference-quality DTS:X soundtrack that immediately draws viewers in with the sounds of an ocean storm and heavy rain falling directly above the listening area before a Mosasaurus jumps out of the water. After that, whether we're at Owen's cabin, the Biosyn Sanctuary, walking through Malta's black market or investigating a farmland ruined by a swarm of prehistoric locusts, the room is always consistently filled with noise. The chirping of birds and the rustling of leaves in trees are plainly heard above, and the roaring echo from dinos in the distance flawlessly pans through the overheads and surrounds. In the final, climactic quarter, the movie really comes to life with various effects discretely traveling across the ceiling or circling from one side of the room to the other. Quieter, more dialogue-driven moments are also layered with various subtle atmospherics, terrifically maintaining an effective and highly satisfying hemispheric soundfield.

Keeping things awesomely engaging, many of those same ambient effects complement the visuals with background activity that fluidly moves between the three front channels and to the top heights, generating a splendidly broad and spacious half-dome soundstage. The design delivers distinct clarity and superb definition in the mid-range, even during the loudest, ear-deafening moments, making every bone-crushing bite pop and snap with extraordinary detail. Again, the final climactic quarter is a fantastic demo-worthy moment where every scream, wail and thunderous roar is distinctly heard above the chaos without a hint of distortion while the dialogue remains intelligible throughout. Michael Giacchino's score exhibits a great deal of warmth and fidelity with excellent separation and definition in every note and between each instrument while lightly bleeding to the front overheads. Most impressive is a robust, authoritative low-end delivering a tremendously palpable, wall-rattling weight to the action and in every dino stomp, occasionally digging into the ultra-low depths down to 5Hz in a few spots (bass chart). (DTS:X Audio Rating: 96/100) 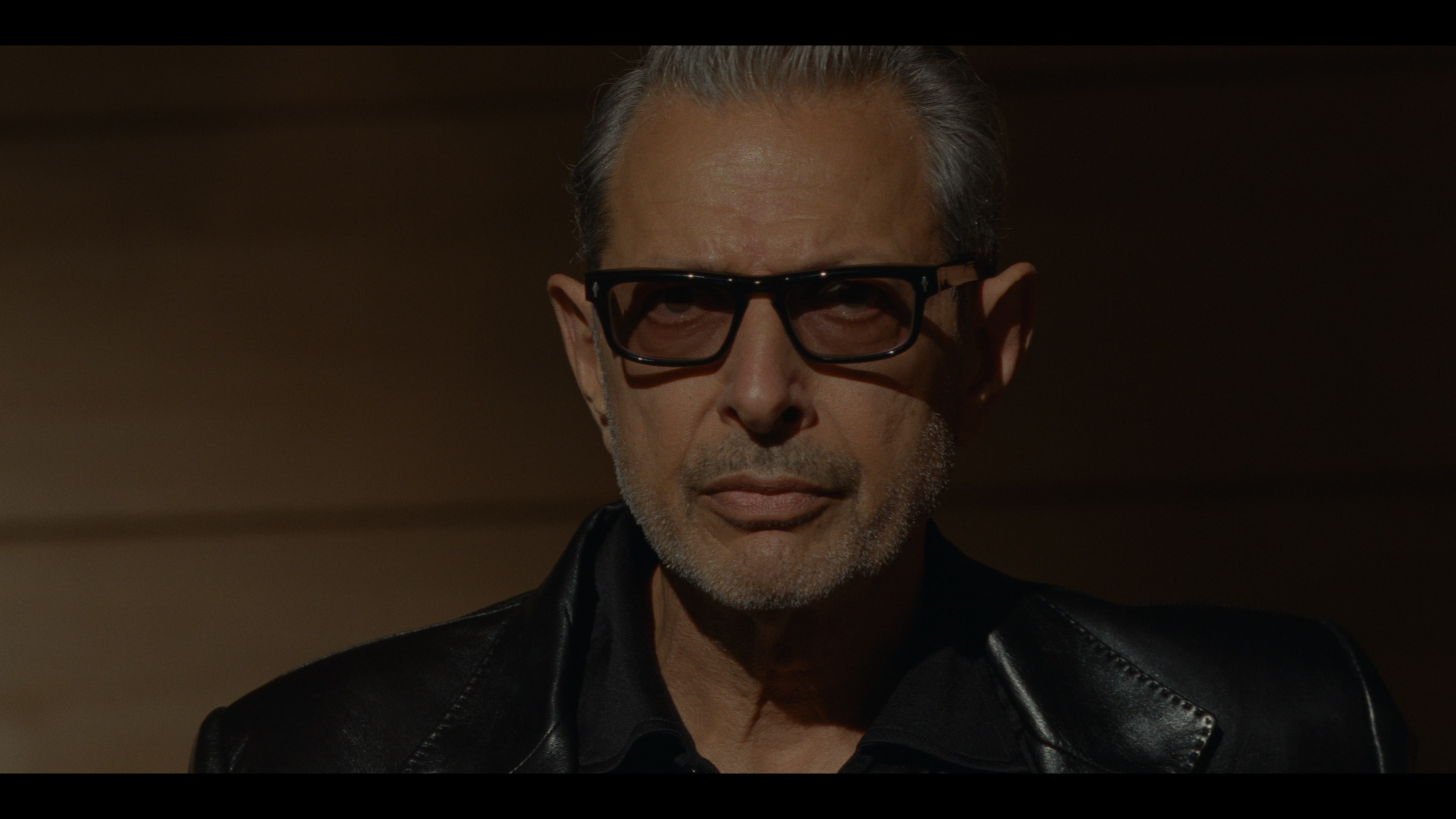 For this UHD, Universal supplies the summer blockbuster with a rather puny selection of supplements, which are the same enjoyed on the accompanying Blu-ray disc. 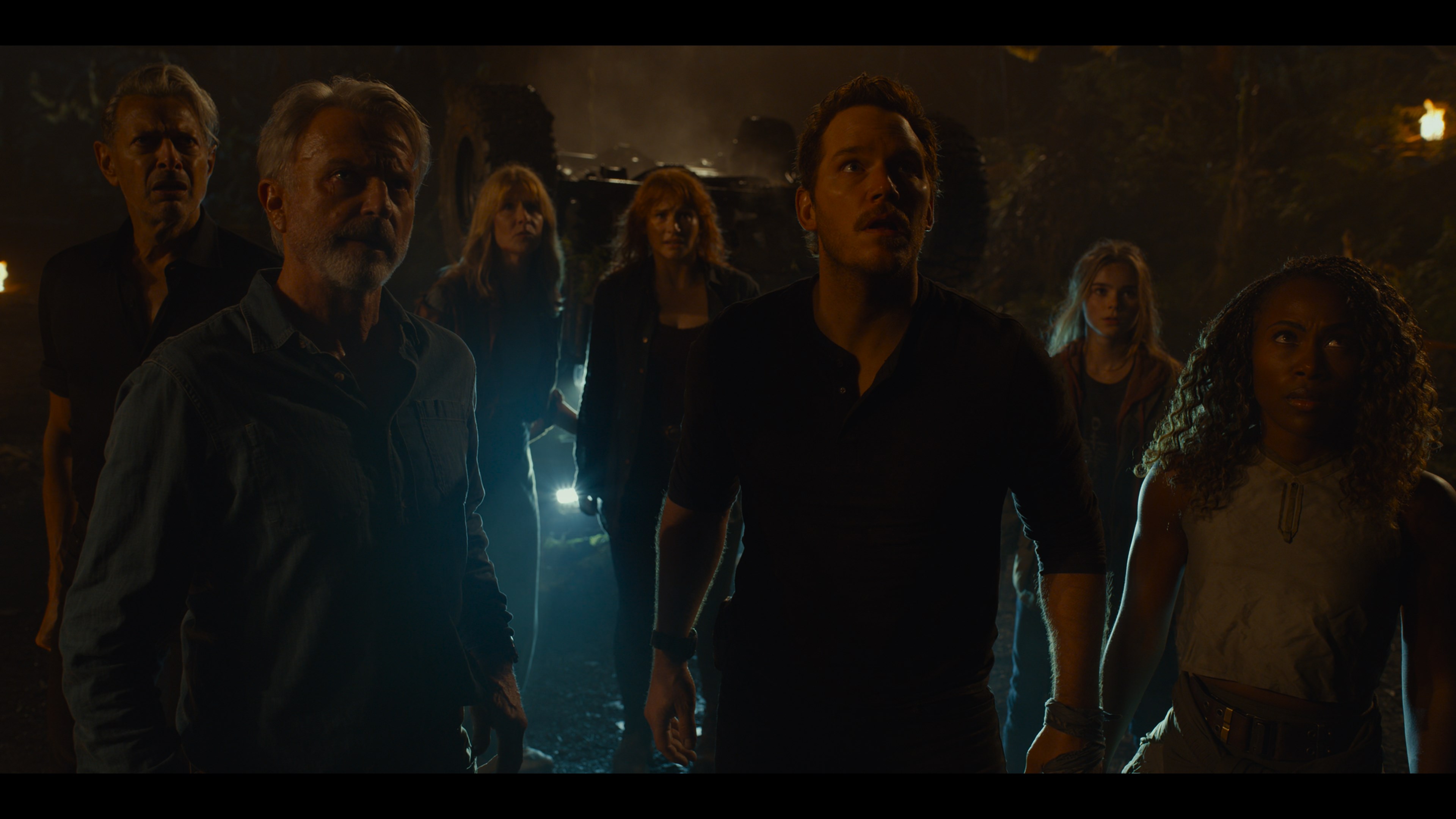 Director Colin Trevorrow returns to the mega-blockbuster franchise about dinosaurs running amok with Jurassic World Dominion, the presumably final installment to the massively popular film series that also reunites Sam Neill, Laura Dern and Jeff Goldblum. Meanwhile, Chris Pratt and Bryce Dallas Howard reprise their roles as adoptive parents to the world's dino problem but provide little to no significance to the plot's larger themes. Nevertheless, the fifth sequel still manages to be a decently amusing and fitting conclusion that falls in line with the previous two entries where the visual spectacle takes precedence over strong or even good storytelling.

The summer blockbuster debuts on 4K Ultra HD with a spectacularly gorgeous Dolby Vision HDR presentation that offers a welcomed step-up over its HD SDR counterpart. A monstrous, reference-quality DTS:X soundtrack complements the visuals, but Universal Studios Home Entertainment has culled together a rather puny selection of supplements to round things out. Overall, the UHD package nonetheless comes recommended for completists and makes for a strong addition to the 4K HDR library.