Michael Mann’s iconic 1995 crime thriller Heat takes down 4K Ultra HD Blu-ray. What could have been a throwaway cops and robbers thriller in lesser hands becomes an intimate character study with Al Pacino, Robert De Niro, and Val Kilmer each delivering masterclass performances. This sprawling crime epic comes home with a pleasing 2160p HDR10 transfer that offers up an appreciable uptick in quality but may still be another controversial release for certain fans. The same DTS-HD MA 5.1 mix is carried over as are the legacy bonus features of the past disc. This is still one of the very best films ever made but after so many releases I do wish there was something about this set to make it a little more special beyond a welcome visual improvement. Recommended

I saw Heat in the theater when I was thirteen. My dad took me to the movies, we’d seen the trailer for a crime thriller from the director of The Last of the Mohicans with a great cast and that was good enough to get our butts in seats. We had no idea what it was going to be or that it was going to be nearly three hours long. We certainly didn’t know it was going to be an epic masterpiece of filmmaking. It’s been a family favorite ever since and we’ve watched it countless times in nearly thirty years. It’s one of the very few movies that I just step back and call “perfect.” And yes, I still consider the “Director’s Definitive Edition” to be perfect even if it looks dramatically different from those first home video releases. 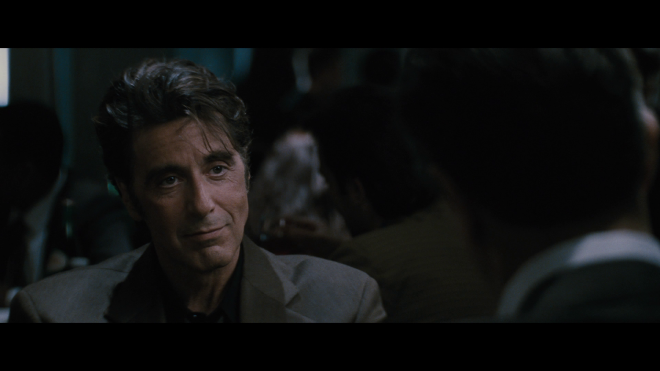 But this is a Michael Mann film and with each release he can’t very well leave it alone now can he? While Heat hasn’t undergone the same multitude of changes as something like Ali, The Last of the Mohicans, or Manhunter - it does have a couple of line omissions and slight editing tweaks. From one release to the next, most folks didn’t notice these little changes. Some super fans easily spotted them and didn’t care one way or the other, while some fans have been quite vocal about these differences. The first big line drop is Diane Venora’s “Detritus” line after Hanna gets back from the murder scene. The other line drop was the “...ferocious aren’t I?” add-on after the infamous “She’s got a…GREAT ASS!” outburst. For me, these aren’t really losses or gains, their absence amounts to little more than a brief “oh wait…” but quickly forgotten old memory from past viewings. I’ve encountered some folks that are deeply passionate about those losses to the point of hyperbolically saying it’s “unwatchable” now, which is completely ridiculous.

As I said, Mann has made more severe and drastic changes to other films over the years. Comparatively, Heat has remained relatively untouched (maybe not visually, but more on that later). It’s impossible to improve on a perfect film. There isn’t a missing scene that would uncover a new arc or aspect of a character. There isn’t a missing beat of an action sequence that would add to the intensity. It’s all here. Yes, there are deleted scenes, but I don't see anything there that'd be beneficial for a new cut of the film. Everything that matters is on the screen. Heat and The Insider, in my opinion, are Michael Mann’s two most complete films where there doesn’t feel a need to add or subtract to any given moment. And now we have Mann's novel Heat 2 to look forward to. Hopefully, it's an equally masterful epic and worthy of a cinematic return someday. 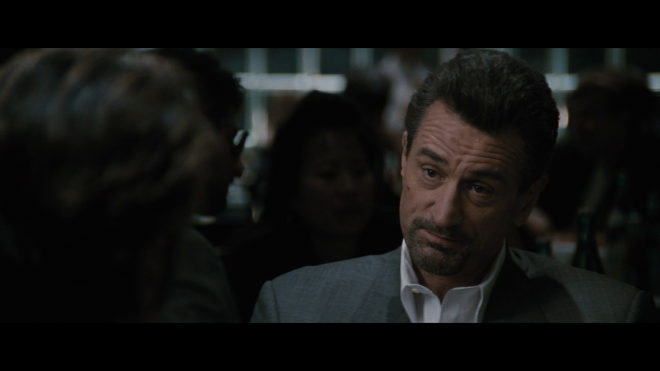 Quick Note: All images for this review were sourced from the 1080p Blu-ray. I haven’t been able to rip the 4K discs to source images or potentially provide a video sample yet. Hopefully, I'll be able to do that soon. 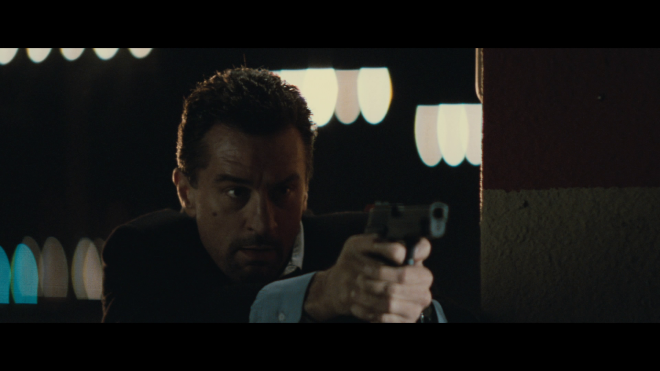 Heat comes home with an impressive - if probably controversial to some - 2160p, HDR10 2.40:1 transfer. Folks upset with the more steely blue and gray color timing Mann tinkered with for the Director’s Definitive Edition will likely find little solace here. There are subtle improvements that give some skin tones a warmer healthier feel and some welcome improvements to contrast so we don’t have those overly bright hot whites, but this is still very much that cooler steely blue tone and not like what we saw with the overall brighter 2009 Warner Bros. disc. It's been so long since I looked at this film on Blu-ray or Laserdisc that I can't comment. And to be honest, I’m perfectly okay with this coloring. I felt Mann made some judicious changes to the timing to invoke a specific look in keeping with the film’s themes and ideas as he explains in an interview with EW. It's certainly revisionist and irksome for some people out there, but I don't count myself in that crowd.

But before I get too far into the color grading, I want to knock out the basics. Details are superb. Fine facial features, clothing textures like Eady’s sweater when she first meets Neil, various facial stubble, Voight's liver spots, and the production design work of each character’s living situation all come through with immaculate clarity. Fine film grain has been retained without ever appearing too noisy or intrusive. This is a very rich cinematic appearance and I enjoy it a lot.

Now with HDR10, this grading is very similar to what we got on the 2017 disc but with appreciable steps for refinement. That steely blue and gray favored timing is still active but I felt there was more nuance to the shading and black levels and whites - especially for dark sequences or when Mann employs his signature blue-filtered ocean views. Black levels hit that appropriately inky shade giving the image a terrific sense of three-dimensional depth. This is especially the case with the final duel between Pacino and De Niro - those black shadows are dark but add to the tension every time those lights come up and fall back. This is an area where I do give the edge to the disc over the streaming. Deep shadows with dramatic lighting always look a bit dodgy to me with streaming showing the pitfalls of a lower bitrate adding more noise and artifacts to the image. That’s not a factor here. Primaries don’t get a lot of opportunities for “pop” but splashes of reds and yellows do come through nicely and again skin tones are healthy. 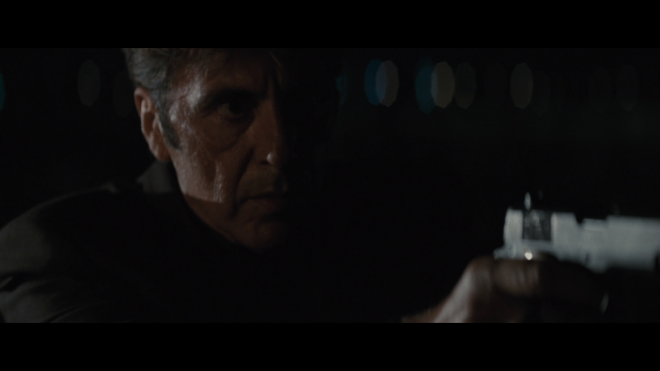 As far as comparison to the streaming version on VUDU and iTunes, they’re very similar. I hadn’t watched the 4K streaming version in some time, but I could have sworn it had Dolby Vision HDR. When I went in to compare them this morning on my AppleTV box, it only offered up HDR10. I could be mistaken that Dolby Vision was ever available at all. The appearances between the HDR10 stream I saw and this disc are essentially identical. Again, the edge I’ll give the disc is for those deep black shadows and shading. The lower streaming bitrate I feel often struggles with light gradients for those very dark sequences.

Folks who hate the revisionist color timing may well be left in the cold here with this release. But for me, this color timing was never problematic. I liked what the 2017 Blu-ray achieved with the more dramatic, almost monochrome coloring. This 4K HDR10 presentation makes some extra refinements giving certain lighting situations more warmth but still keeping that colder slate gray hue. This isn’t a night and day, “blow your hair back” difference maker, but the improvements are readily apparent and appreciable enough to call this a superior visual presentation. I'd be curious if this ever got a full BD100 disc to work with and what more could come of it given the film's long run time, but for now, this is pretty impressive. 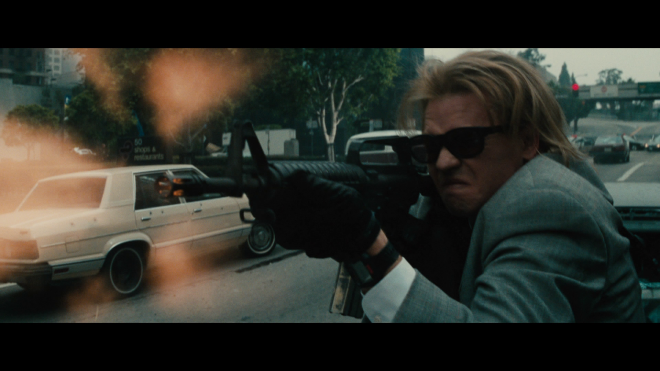 From the sound of things, this release of Heat reuses the exact same DTS-HD MA 5.1 audio mix as the 2017 disc. For my dollars - while I would have loved an Atmos track - this is still an excellent hit. I’ve heard from some people who felt this mix was too soft, but I’ve never had an issue with levels as this film always felt more like a character drama with some really intense action beats thrown in. I keep my receiver at 55 and I’ve never felt the need to adjust the volume in any way.

So much of the film is just people talking in relatively quiet inactive locations that when the big activity hits it’s jarring like you’re someone caught on the street minding their own business and a full shootout erupts all around you. Likewise when active music cues come in a scene can be practically silent and then sport some serious bass response and flow through all of the channels. Kicking in DTS Neural:X offers some more special dimensionality and opens things up, but at its core, this is still a terrific mix. There's plenty of surround activity for an active soundscape and dialog is never an issue to register. 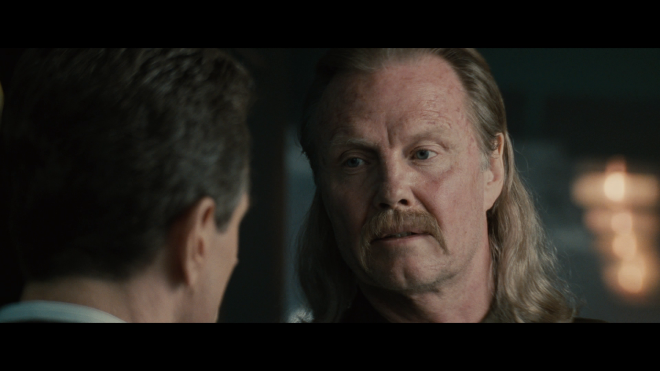 Sadly, nothing new in the soup for this release, which is fine. This package was always pretty great and Mann’s commentary is well worth the listen. With the film’s 30th Anniversary coming in a couple of short years, I’m sure there’ll be another more elaborate release but we’ll have to wait and see about that. But for now, here’s what you’re getting: 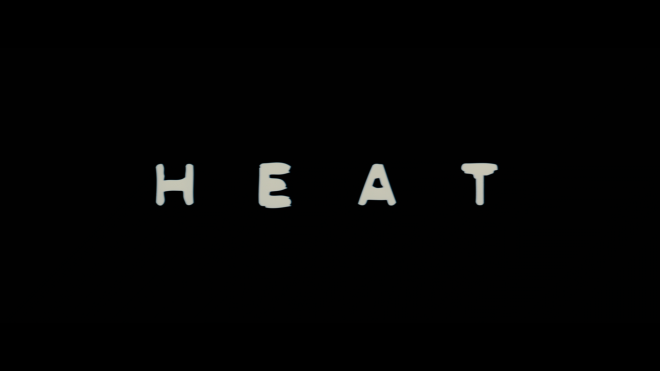 Michael Mann’s Heat in my opinion, is a cinematic masterpiece. I couldn’t take my eyes off it as a kid in the theater and I still can’t stop looking at it. From Mann’s crisp crackling dialog and excellent work behind the camera to the electrifying performances to the full-throated action sequences, there isn’t a single misspent frame of celluloid in the final film. There have been countless imitations, but there’s only one Heat.

Now on 4K Ultra HD Blu-ray from 20th Century Studios/Disney, Heat scores a welcome native 4K HDR10 transfer that offers many improvements over the 2017 disc but the color timing may stick in the craw of those who didn’t take to Mann’s revisionist timing for the Director’s Definitive Edition. It sounds as though the same DTS-HD MA 5.1 mix was reused here - and that’s perfectly okay - and the same set of interesting bonus features is backed up for posterity. At the end of the day, this might not quite be what everyone hoped for with a movie like this, but for those looking to upgrade, I'm calling it Recommended. There's enough here for a worthwhile pickup if you're a huge fan and need this in 4K on disc.