"In terms of total ridiculousness, Red Dawn was no different than its cinematic comrades. But in terms of believability, well, that depends on who you ask. After cooler heads prevailed, it’s easy to look back at a movie like this and bask in the silliness, but there was a subsection of the population that genuinely believed – and arguably still do – that invasion was imminent. Ever since the Cuban Missile Crisis of the early 1960s, those commies had to be lining up to invade. But that invasion never came and so these movies became relics of a bygone era of action-packed goofery.

And that’s what I love them for. I didn’t become a moderate-leaning pinko lib until I was in my twenties but throughout my childhood and formative years, I loved these movies and Red Dawn. For whatever reason, it felt like this movie was always on one of the local Detroit stations. Being from Ann Arbor, the call of “Wolverines” felt like a chant for the local champion college football team. Admittedly it was a weird thing to be proud of, but as kids, we’d shout it on the playground with pride. When the remake came to shoot in Michigan, we had a lot of hope that they’d take advantage of the area locations, sadly that didn’t happen and that flick has thankfully passed out of consciousness and into the oblivion of sub-par sequels and useless remakes. 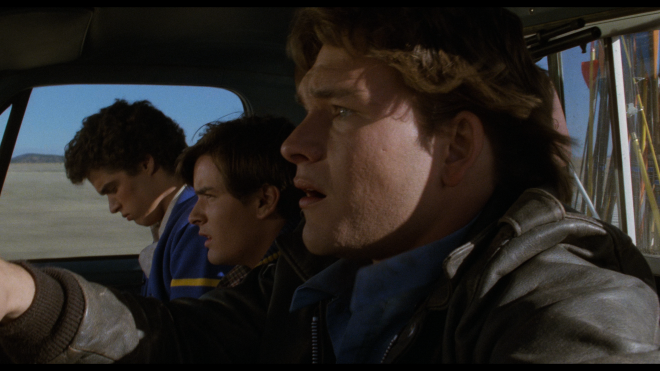 As for the 1984 original Red Dawn, it might have a lot of period political baggage attributed to it, but who gives a damn anymore honestly? It’s an action classic. John Millius and Keven Reynolds’ script was tight and to the point drafting up a squad of believable characters fighting and surviving impossible situations. The cast is great with a Platoon of up-and-coming actors and actresses giving it their all. Basil Poledouris’ excellent score really gets the blood pumping. Red Dawn is totally ridiculous and silly, but it's still incredibly entertaining. WOLVERINES!"

Vital Disc Stats: The 4K Ultra Blu-ray
Red Dawn invades 4K Ultra HD Blu-ray with a fully-armed two-disc release from Shout Factory with a Best Buy exclusive SteelBook. The discs each get separate bays to occupy without being stacked. The 4K UHD is pressed on a BD-100 disc with the 1080p scoring a BD-50 disc that’s identical to the 2017 release. Apologies for the lack of an unboxing video here, but a cold hit and my voice isn’t worth a damn - so pictures will have to do. 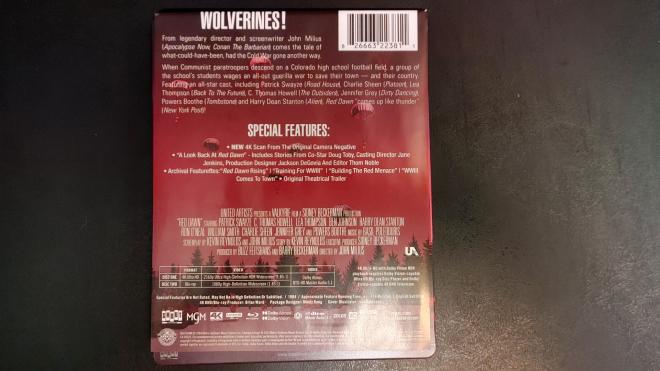 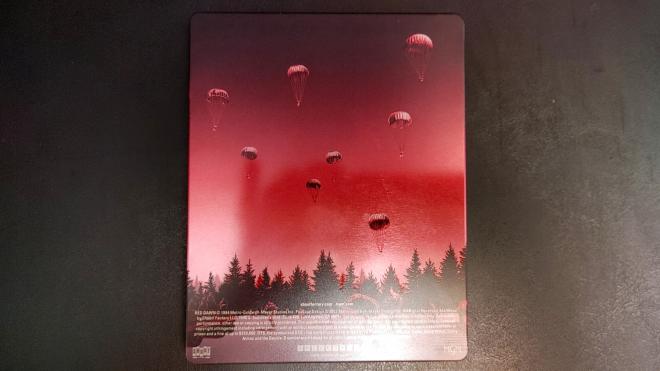 The custom artwork for this set is pretty good, but I would have enjoyed something closer to the original poster artwork. I like the back and inside art, but the images of Swayze, Thompson, Howell, Sheen, and Grey make it look more like The Breakfast Club than a full-throated 80s action classic. I would have picked up the standard release instead but apparently, my local Best Buy didn’t get many of those, the only regular copy they had the slipcover was pretty roughed up so the SteelBook was all I could grab. It’s sadly not as cool as the awesome SteelBook art for Child’s Play. 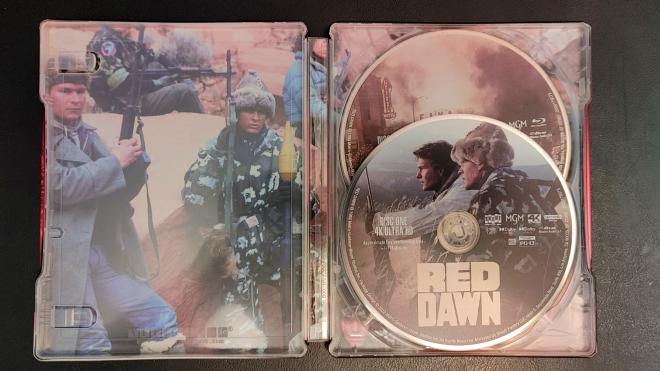 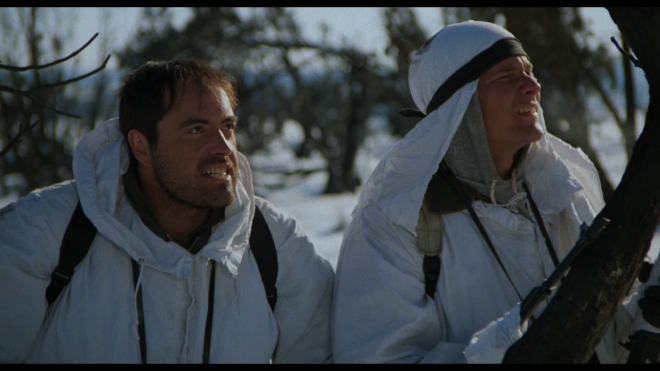 "Despite its popularity and longevity, Red Dawn has never really enjoyed an impressive disc release. From DVD to two rounds on Blu-ray, this fan-favorite was given a rather ho-hum treatment. Thanks to what’s reportedly a new 4K scan of the original camera negative, Red Dawn arms up for an impressive 2160p Dolby Vision HDR transfer. Some cooked-in issues still linger, but overall this is the best I’ve seen Red Dawn on home video. For much of the film, details are crisp and clear giving a full appreciation of textures, facial features, and production design. The New Mexico shooting locations are scenic and beautiful. Film grain is natural and cinematic without being intrusive or clumpy.

Dolby Vision HDR works wonders in a lot of areas for this film. Past releases struggled with crushed black levels and scenes with difficult shadows, but that’s not an issue here. Blacks are deep and inky and shadows offer more lighting nuance giving more depth to the show than on past discs. Colors are bold without being blown out with bright natural blues and reds and healthy skin tones. Whites are crisp without blooming. 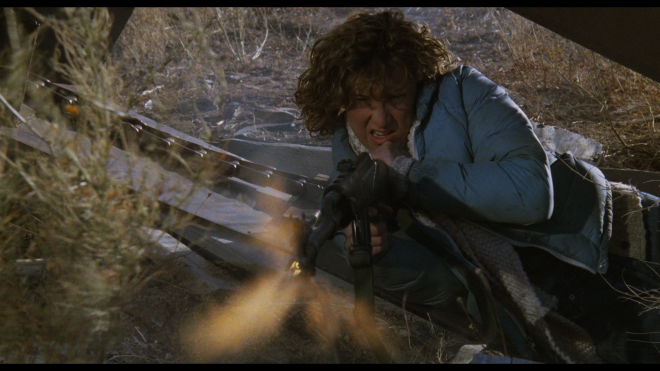 While this disc is an excellent step up and a worthy improvement over past discs, there are a couple of trouble spots to report. The biggest issues come with the optical effects for subtitles. Because there are several sequences where characters are speaking Russian or Spanish, these scenes still look pretty rough. Details take a hit, grain is thicker, there’s a little more speckling in the image, and compared to scenes we just saw are a notable step back. These scenes have always been dodgy so that’s not too much of a surprise, but it’s still a slight knock for an otherwise excellent transfer." 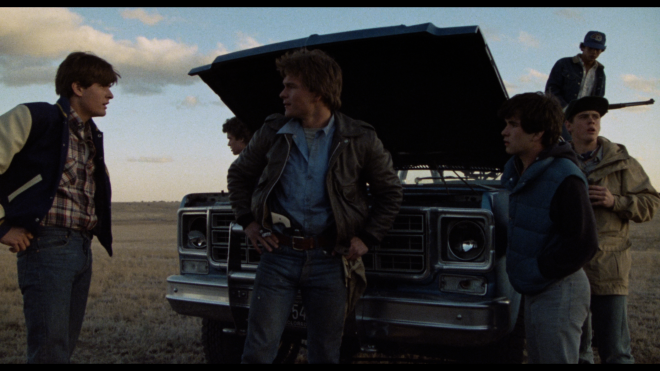 "Fans looking at the disc details might get excited to see Dolby Atmos listed, but don’t get too excited. That appears to be a misprint. The only audio tracks present are the DTS-HD MA 5.1 and DTS-HD MA 2.0 stereo tracks carried over from the 2017 Blu-ray. And really I have no problem with that. These two tracks are generally excellent and pack a punch for those big action sequences. Dialog is clear throughout without issue and Poledouris’s score comes with more power than the old 2012 MGM Blu-ray. In this case, I lean towards the 2.0 track as the better of the two, but you can’t really go wrong with either track." 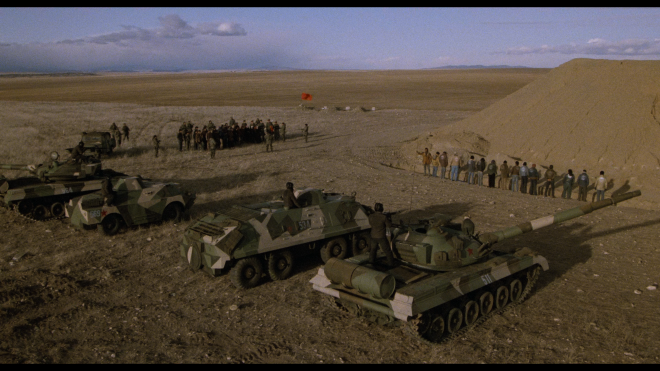 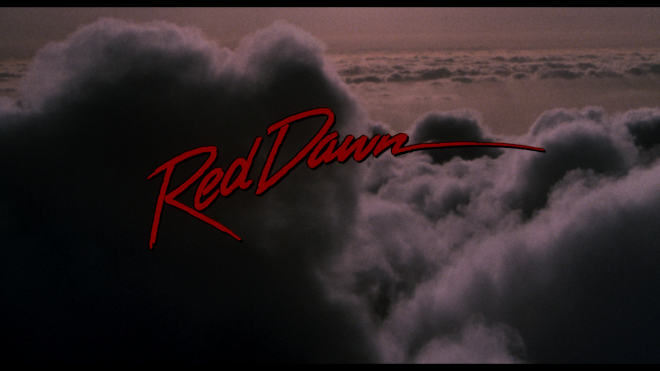 Red Dawn is a genuine product of its era. Steeped in the global politics of the time, its American jingoism action fantasy filmmaking at its finest. Take this film out of the 1980s and you get that terrible 2012 remake that makes absolutely no sense. While this film may not age well for some, for 80s brats this is a classic! Silly, sure – but a classic!

Fans of Red Dawn aiming to pick up this flick on 4K have the options of either a standard release with slipcover or a Best Buy Exclusive SteelBook release. While I’m not an overwhelming fan of the artwork, it’s still a decent piece of work for collectors to consider. I grabbed it because it was what was available, so not my favorite piece of work but - I bought this to have and watch the movie in 4K rather than a package to sit on the shelf sealed in its plastic wrap. To that end, Red Dawn enjoys a splendid 4K Dolby Vision restoration. There are some cooked-in issues that still linger, but for the vast majority of the film this is an obvious and clear upgrade. Audio offers the same solid DTS-HD MA 5.1 and 2.0 tracks as before with the same selection of bonus features. Recommended