Four people are tossed into a desperate game of survival when their elevator gets stuck in Out of Order. This simple but stylish potboiler thriller finds its swift pace and high tension thanks to a tight concept and a great cast. Subkultur USA with Vinegar Syndrome deliver a terrific new 4K Ultra HD Blur-ay release with an excellent Dolby Vision/HDR10 transfer, three audio options, and a fine assortment of bonus features. Highly Recommended.

It’s Friday night and everyone has gone home. The only ones left in a massive office highrise are a business executive (Gotz George) and his girlfriend/co-worker (Renee Soutendijk), a young messenger (Hannes Jaenicke), and an old man carrying a briefcase (Wolfgang Kieling). Together they board the express elevator hoping to end their evening just like any other. But when poor maintenance causes the elevator to get stuck, the four strangers will have to figure out a way to signal for help or escape the claustrophobic car if they want to survive.

Out of Order - or “Abwarts” as it’s appropriately known in its native Germany - is a slick and stylish potboiler of a thriller. Get a few people stuck in a small space and watch the tension rise. Few films pull this off effectively, but Out of Order does a terrific job staging small intricate plot points in a tight 88-minute runtime. There’s little room for extraneous character monkeying around or useless exposition. Within the first few moments, we learn everything we need to know about these characters.

Written and Directed by Carl Shenkel, he wisely uses his talented cast and simple setup with great effect. One thing that I can hate about potboilers and especially survival films is the dumb choices some characters can make. Here Shenkel avoids the worst tendencies of the sub-genre by establishing quickly and early that the maintenance on the elevators is lacking, to say the least. So when they decide to figure out how to escape instead of waiting it out, it makes sense. The steps they take make sense. It’s not illogical for them to want to figure out a means of escape when clearly no one has heard the alarm or cries for help. 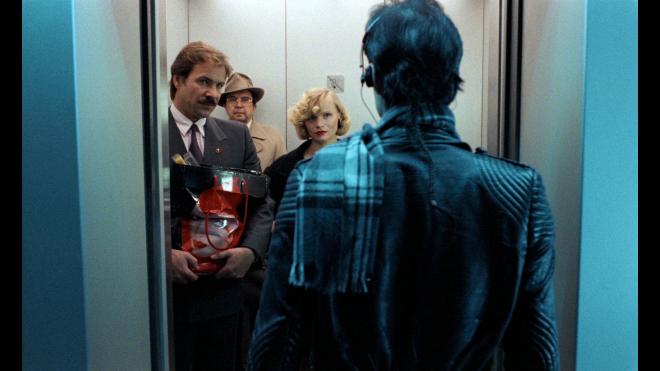 Where the simple plans go wrong comes from their natural distrust of one another. The character sparring between Gotz George and Hannes Jaenicke drives a lot of the action in that regard. Renee Soutendijk gets to play the sultry woman they spar over her affections but thankfully she’s not a useless throwaway female role. Then we have Wolfgang Kieling in a near-silent role of a man who is desperate to get out of that building as fast as he can, but he has secret reasons of his own.

From one plot point to the next, Out of Order steadily builds with pitch-perfect rising tension and release actions. This doesn’t have the trappings of a fancy mega-budget production, but it doesn’t look cheap either. While the sets are basically an elevator car and a dark shaft leading into a black abyss, it’s a stylish show. Shenkel uses these simple locations to mine great performances and stage some truly nail-biting scenarios right through to the tension-filled shocking finale. 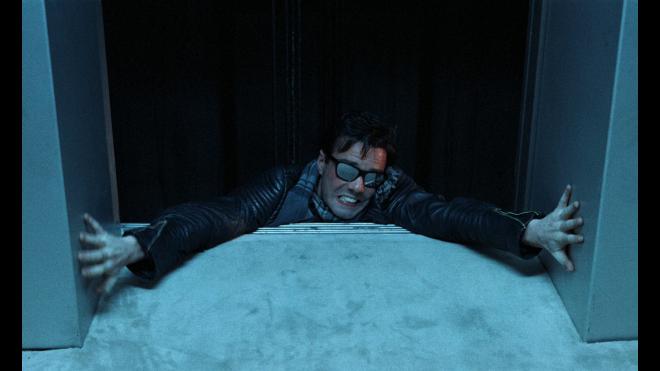 Vital Disc Stats: The 4K Ultra HD Blu-ray
Out of Order arrives on 4K Ultra HD Blu-ray in the U.S. in a two-disc 4K UHD + Blu-ray set from Subkultur USA with Vinegar Syndrome. Pressed on a BD-66 and region-free BD-50 disc, the discs are housed in a standard sturdy black case with reversible insert artwork. If you order from Vinegar Syndrome you get an exclusive slipcover. The disc loads to an animated main menu with standard navigation options. However, what’s interesting and I’ve never seen this in any other 4K disc so far, from the main menu you can choose if you want Dolby Vision or HDR10 instead of letting the disc and player auto default. 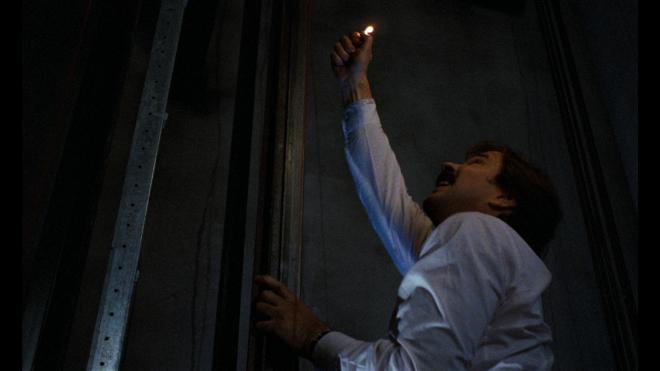 Even with its limited lighting and production values, Out of Order arrives with a splendid 2160p Dolby Vision and HDR10 transfer. Subkultur already released this film in their native Germany at the beginning of the year so I have little doubt this is the exact same transfer for both the 4K disc and included 1080p Blu-ray.

Details are terrific for this release. Again, there isn’t a whole lot to look at other than the four people on screen and the stark surroundings of the elevator car or the dark elevator shaft. But, facial features are excellent allowing every little mustache hair, wrinkle, or smile line to come through with impressive clarity. Film grain is well rendered and naturally cinematic without ever being too noisy or intrusive. 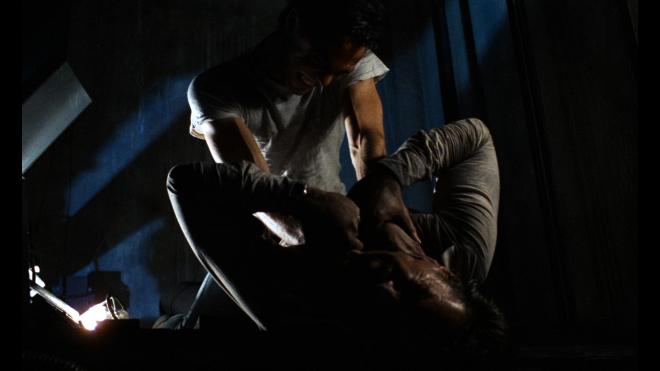 Both the HDR10 and Dolby Vision passes make great use of the deep dark shadows and inky black spaces. With this disc letting you switch between the two, I didn’t see too much of a difference between the presentations. The one edge I’ll give to Dolby Vision was some of the shadow separation and light gradience when Gotz George is climbing around the elevator shaft alone and nearly dies is a bit more refined than the HDR10. Colors are fairly drab considering the location, but red gets a nice flourish thanks to some lipstick and a yellow game system has some pop. All around an excellent presentation. 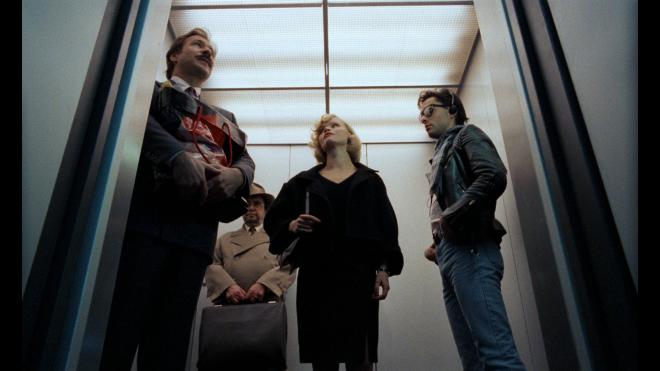 For this release of Out of Order you can choose between a DTS-HD MA German Mono, a DTS-HD MA German 5.1 track, or if you don’t care for subtitles a DTS-HD MA English dubbed Mono track. All three are excellent options, but I’ll tip my hat to either the German Mono or 5.1 tracks for the best overall experience. The mono track naturally keeps things nice and tight adding an extra layer to the claustrophobia aspect of the film. The 5.1 mix opens things up but that extra spacing is a nice experience in itself when the elevator slides or when someone is climbing around the elevator shaft there are plenty of extra tension-filled sound effects. So with that, it all comes down to how you want to experience the film and you can’t lose with either of those.

Now the English Mono track is actually pretty good. I appreciate the voice acting isn’t atrocious and the voices actually sound somewhat like their native German counterparts. But given the dubbed dialog there’s something slightly hollow when anyone speaks. Sound effects and scoring are still on point, but unless you really can’t stand to look at subtitles, this English dubbed track works pretty well. 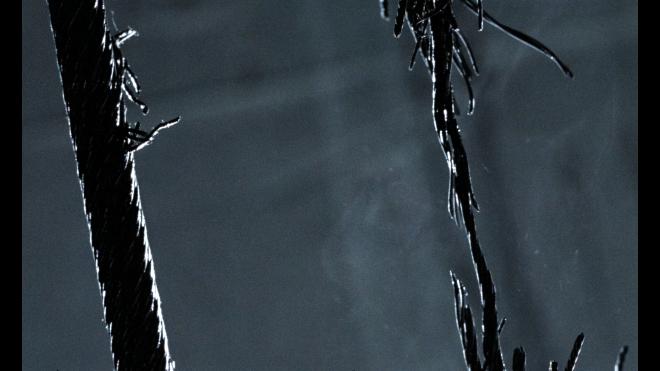 Out of Order isn’t stuck for a lack of bonus features. Subkultur pulled together an interesting array of features for fans to pick through. The interviews offer up some interesting tidbits from the cast and crew perspective. The isolated score is a nice addition even though it’s fairly minimal. The real interesting thing people will want to dive into is the Alternate Cut of the film. It’s only a couple of minutes longer and there aren’t any radical changes, but it’s interesting to see nonetheless. 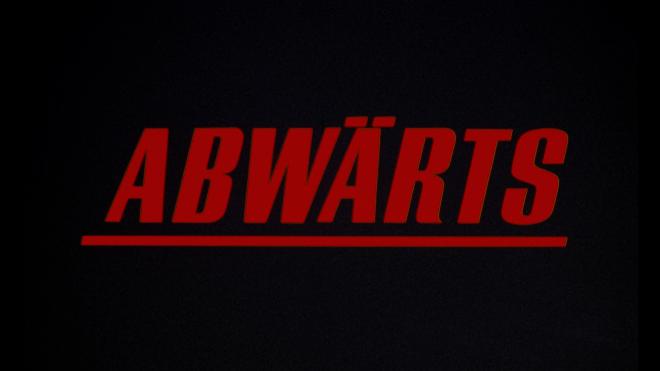 Out of Order is a tightly wound slick character study of a thriller. Pit four people in a survival situation and watch them rise to the challenge or completely unravel. Writer and Director Carl Shenkel crafts a masterclass example of story structure with constantly rising stakes and tension with little time to catch your breath. If you haven’t caught this one yet, it’s time to jump aboard and enjoy the ride! Subkultur USA brings this great flick to the U.S. with a fantastic 4K Ultra HD Blu-ray release. The Dolby Vision/HDR10 transfer is terrific, even if this isn’t the most colorful film with an inventive production design, it looks great. Capped off with multiple strong audio tracks to choose from, you also get a nice selection of bonus features to pick through. Highly Recommended.