On the surface, the story about a maniacal, two-foot doll possessed by the soul of a psychotic serial killer shouldn't have any true redeeming value whatsoever. Yet, director Tom Holland (Fright Night) generates several fun moments of suspense and action in the cult slasher favorite Child's Play. Part of the movie's enduring popularity, I would argue, has to do with the six sequels changing the way we now watch the original, changing it from a less serious, straight horror flick into a more ironic and facetious attempt at genuine horror. The other is without a doubt Brad Dourif as the iconic voice of Chucky. Without his talent, the movie would lack a great deal of feasibility and at least some hint of believability. It is only with the evil, wicked attitude he imposes in the character that we enjoy watching Chucky strut his stuff and trust that the doll is capable of terrible malice and malevolent intent. 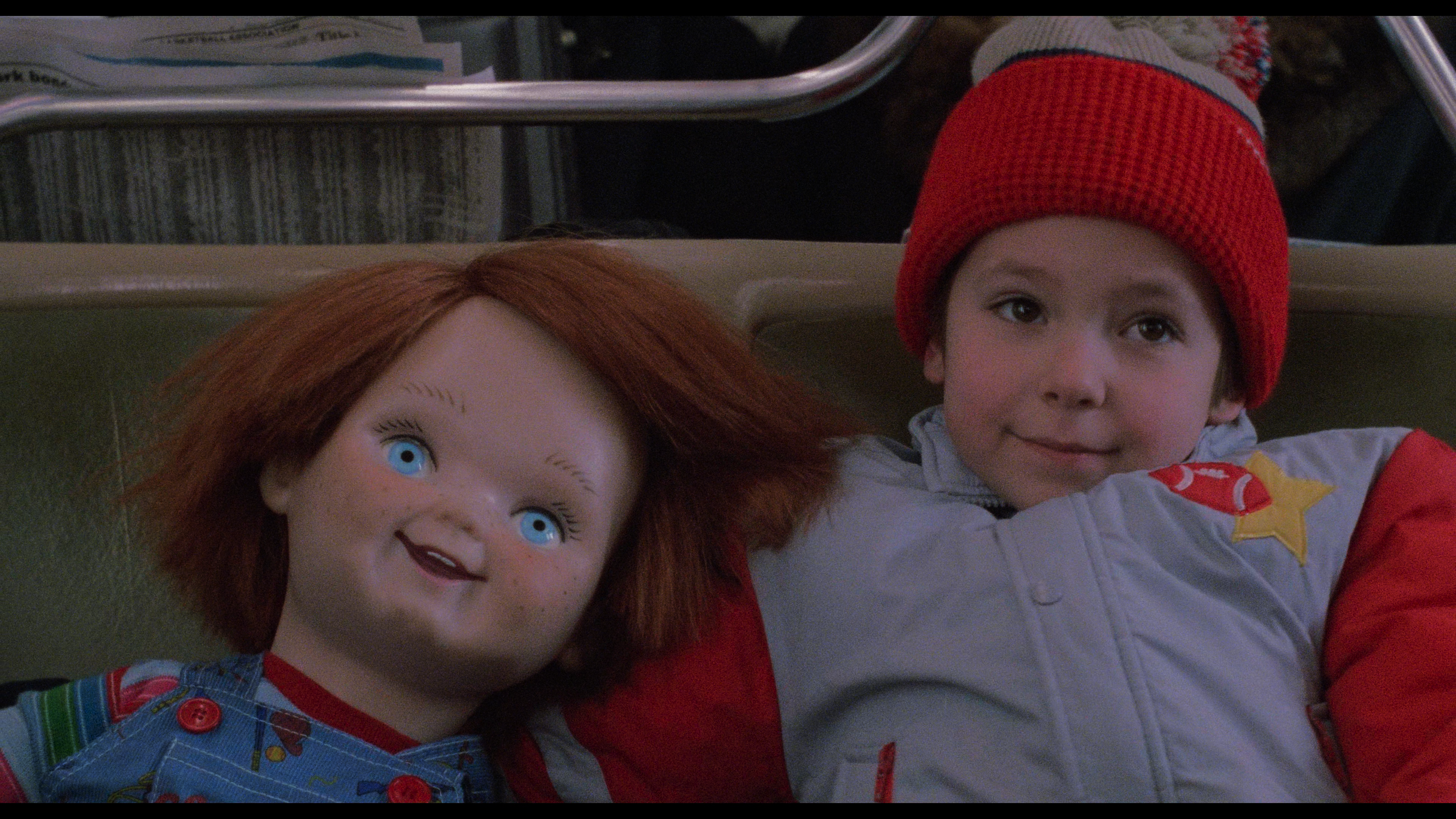 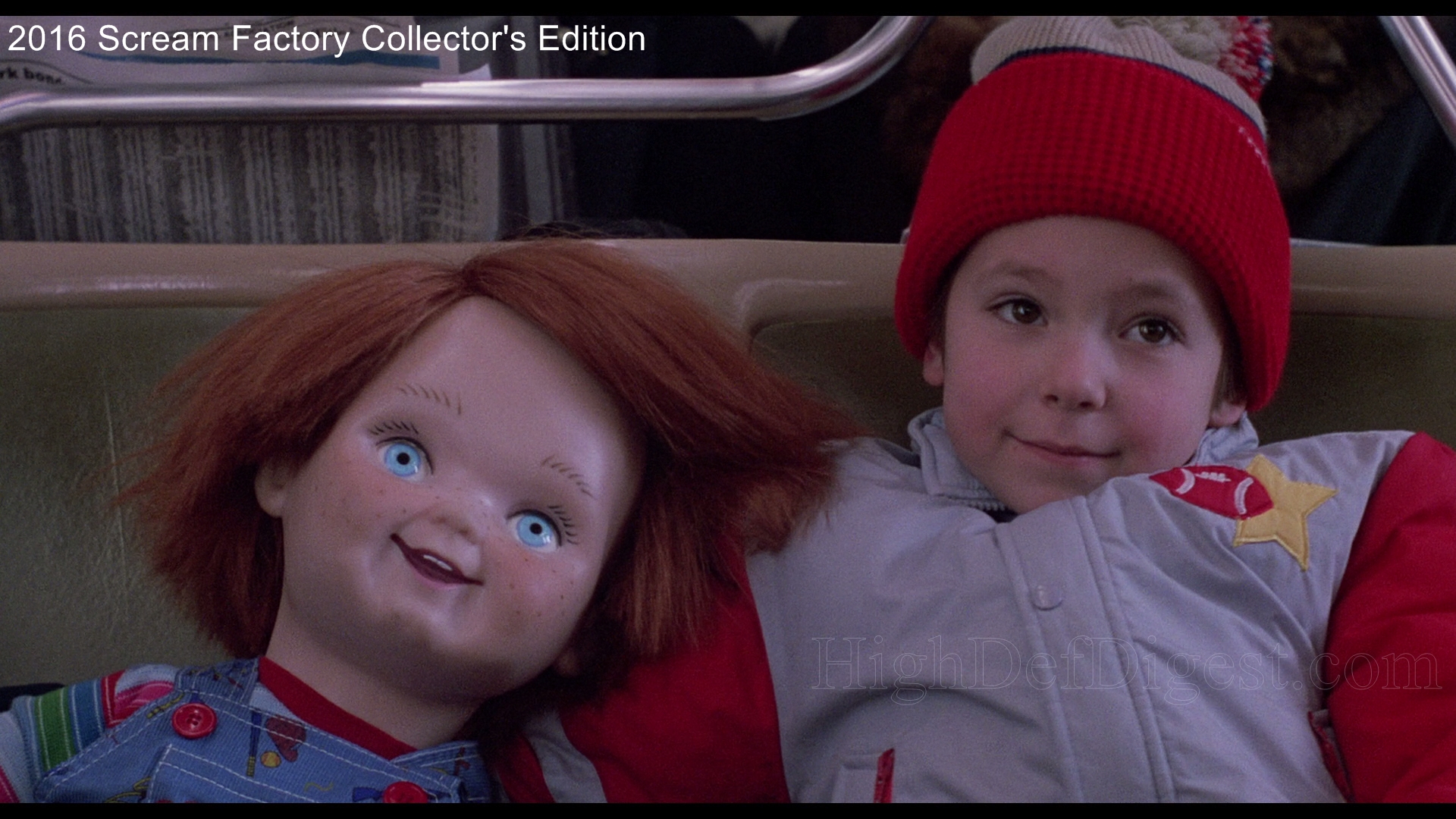 Of course, Chris Sarandon, Catherine Hicks and Alex Vincent pull their weight and win over the audience, but Dourif, frankly, remains the primary reason for fans revisiting the movie and encouraging the series to continue. Other than the spot-on performances, however, the original installment of the franchise lingers in the memory banks of horror aficionados because of Holland's surprisingly stylish direction and eerie atmosphere, effectively using the dark shadows and skilled camerawork for generating an ominous air. Of greater interest is Don Mancini's plot tapping into the strange cultural phenomena of 1980s children's toy marketing, like the Cabbage Patch Kids craze. But I like to think the Good Guy doll possesses a striking resemblance to My Buddy or even a demented version of Teddy Ruxpin. In either case, the idea of toys that try to appear more lifelike is quite creepy and disturbing, and the filmmakers take advantage of this and provide audiences with a tale that plays into our childhood nightmares.

Making it all the more fun is the amazing F/X work by Kevin Yagher, creator of The Crypt Keeper and make-up artist for Freddy Krueger. In this day and age of CGI dominance, it's worth admiring how this production was pushing the boundaries of special effects and animatronics, appreciating Chucky's realistic movements and watching his horrifying facial expressions slowly morph from innocent doll to a raving psychopath. To this day, the groundbreaking visuals still hold up as a major part of the film's entertainment value. If not for the remarkable work done by Yagher's team, this could have easily been nothing more than a faded memory of terribly made horror flicks. What starts as a straight-forward "whodunit" mystery thriller has grown into a popular series with yet another unforgettable psycho-killer in Chucky. Nearly thirty-five years later, Child's Play remains a delightfully fun slasher for a late Saturday night watch.

Vital Disc Stats: The Ultra HD Blu-ray
Scream Factory brings Tom Holland's Child's Play to 4K Ultra HD as a three-disc Collector's Edition combo pack. The Region Free, UHD100 disc sits comfortably opposite a Region A locked, BD50 disc on a center spindle while a second Region A locked, BD50 disc containing the rest of the bonus features sits on the opposing panel. All three discs are housed inside the standard black keepcase with a cardboard slipcover. At startup, the disc goes straight to a menu screen with the usual selection along the left side of the screen while the right side shows full-motion clips and music playing in the background. 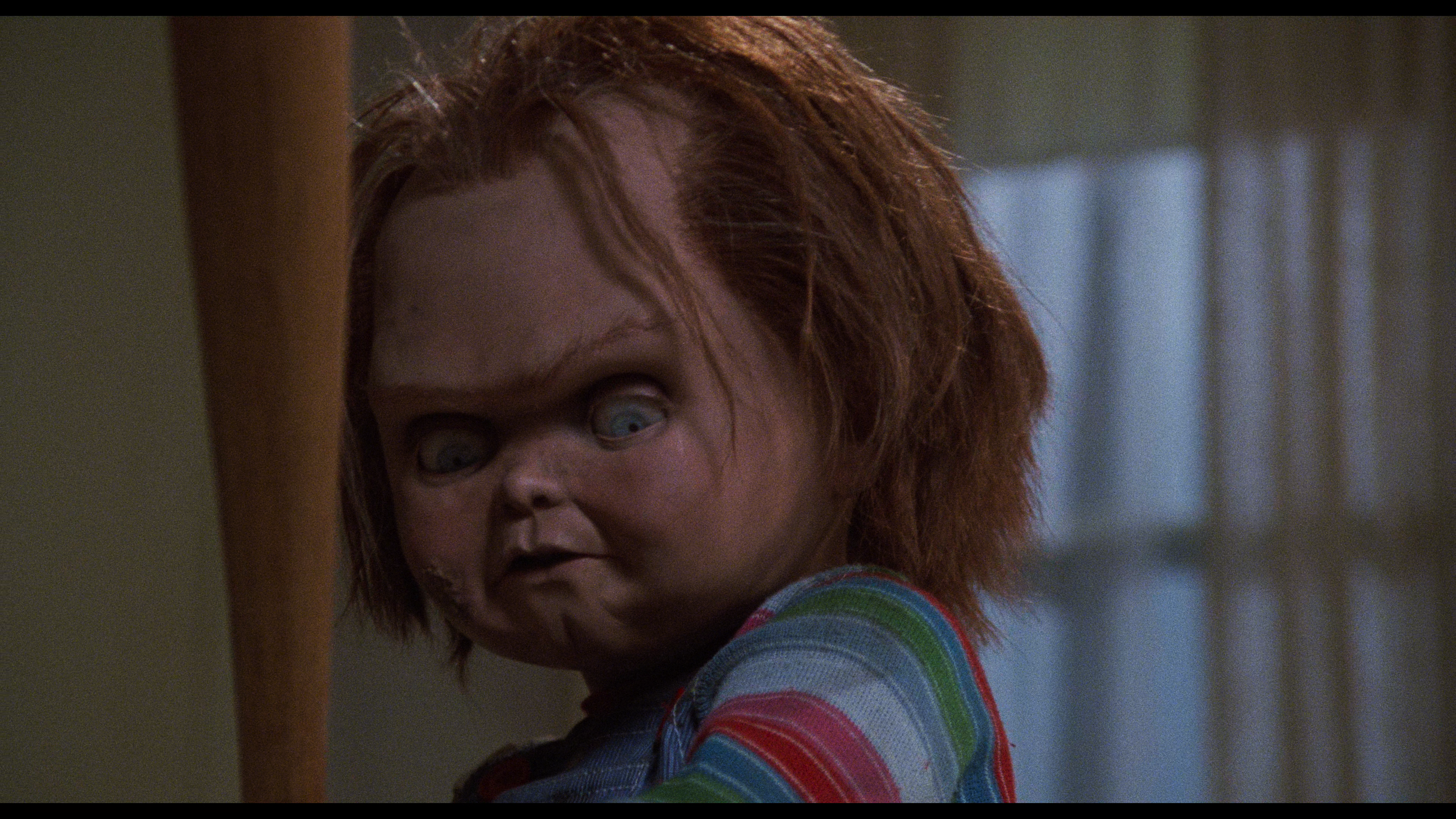 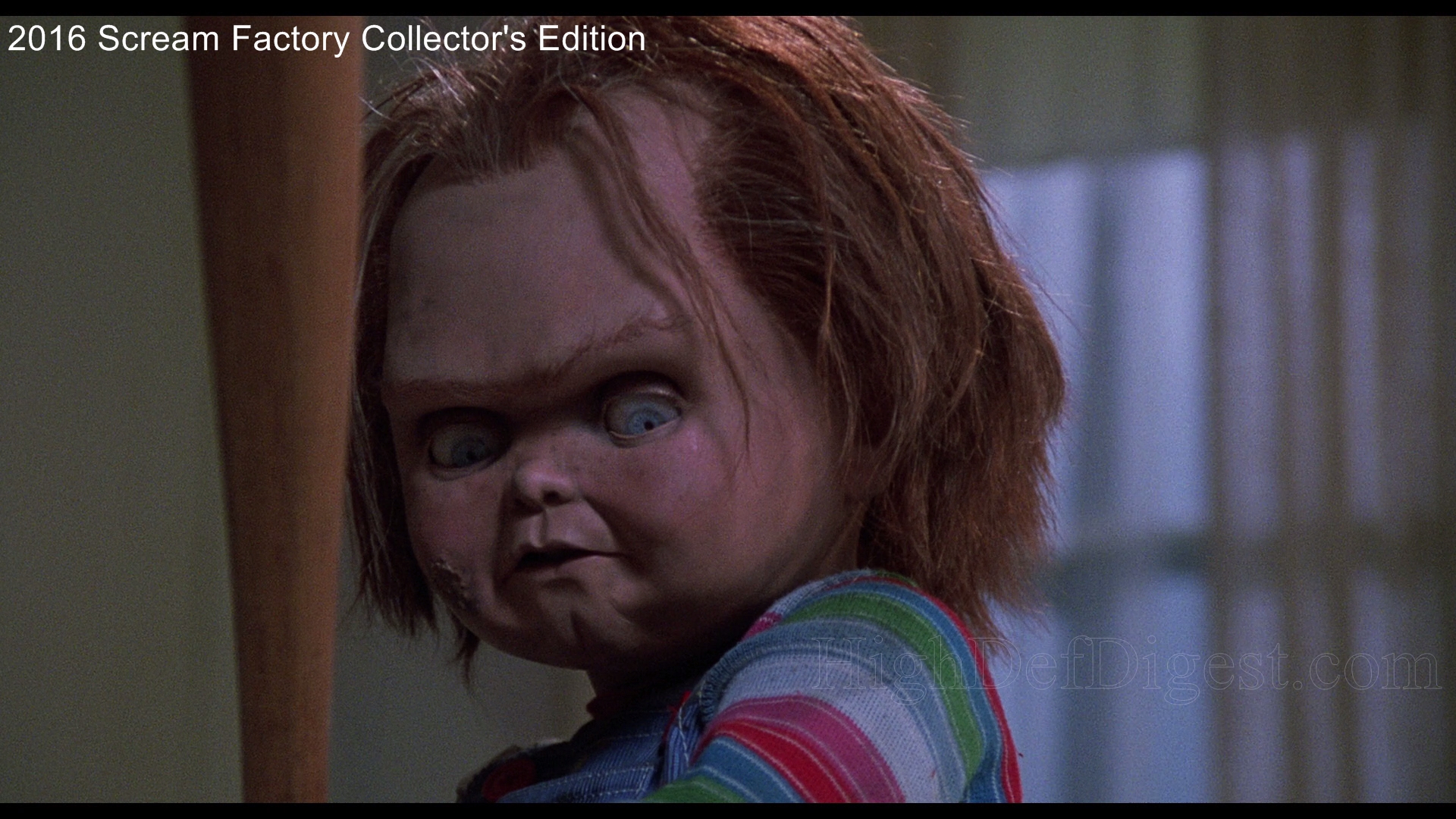 Chucky has finally found a friend 'til the end in the comforting arms of 4K Ultra HD thanks to a beautifully impressive HEVC H.265 encode. Struck from a brand-new remaster of the original 35mm camera negatives, this native 4K transfer surprisingly offers a marked improvement over its two previous Blu-ray predecessors, showing plenty of sharp details in the clothing and in the streets of Chicago. The stitching and fabric in the Good Guy's outfit are plainly visible, and the fine lines in the stone bricks of Barclay's apartment building are well defined. Of course, the video comes with its fair share of softness and the resolution noticeably dips in a few spots, but such moments are inherent to the original photography. Overall, the source is in excellent condition with a consistent, thin layer of natural grain, furnishing the video with a lovely film-like quality.

Furthermore, the Dolby Vision HDR presentation boasts an improved contrast and brightness balance, showering every scene in clean, vivid whites and inkier, midnight blacks. Unlike its HD SDR counterpart, shadows are also stronger and more velvety with better visibility in the darkest corners, providing the 1.85:1 image with appreciable dimensionality and an attractive cinematic appeal. Bill Butler's cinematography gains a great deal from the improved specular highlights, as well, allowing for better clarity within the hottest spots while watery and metallic surfaces come with a more realistic sparkle and sheen. The palette benefits the most with primaries looking significantly richer and more sumptuous, especially the candy rose red and animated navy blue of Chucky and Andy's outfits. Likewise, secondary hues are more full-bodied and vibrant, like the buttery yellow of the Good Guy box and the tiger orange of Chucky's hair. At the same time, facial complexions are highly revealing with a lifelike, peachy-rose tone in the entire cast, making this the best the movie has ever looked in any format. (Dolby Vision HDR Video Rating: 88/100) 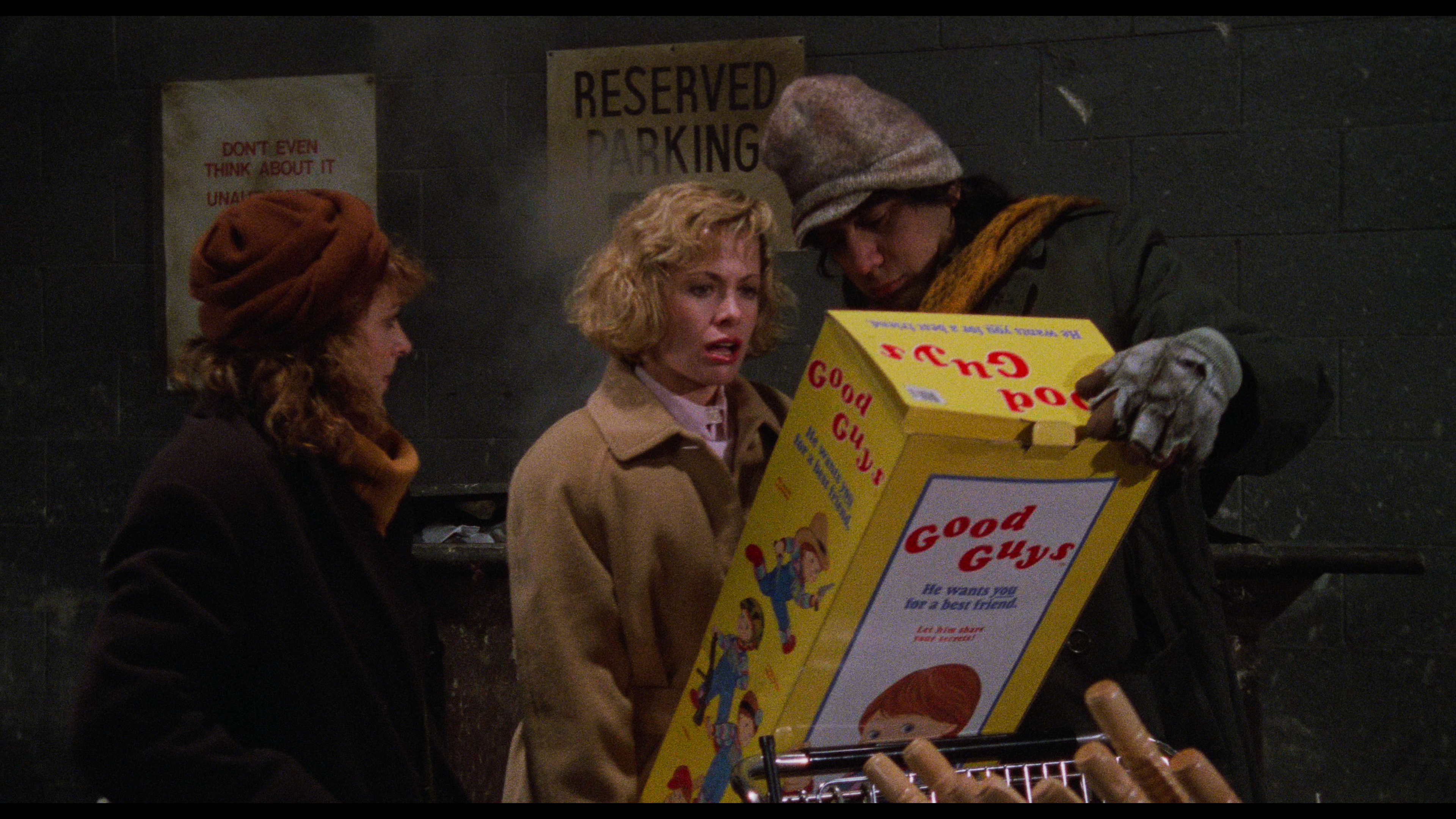 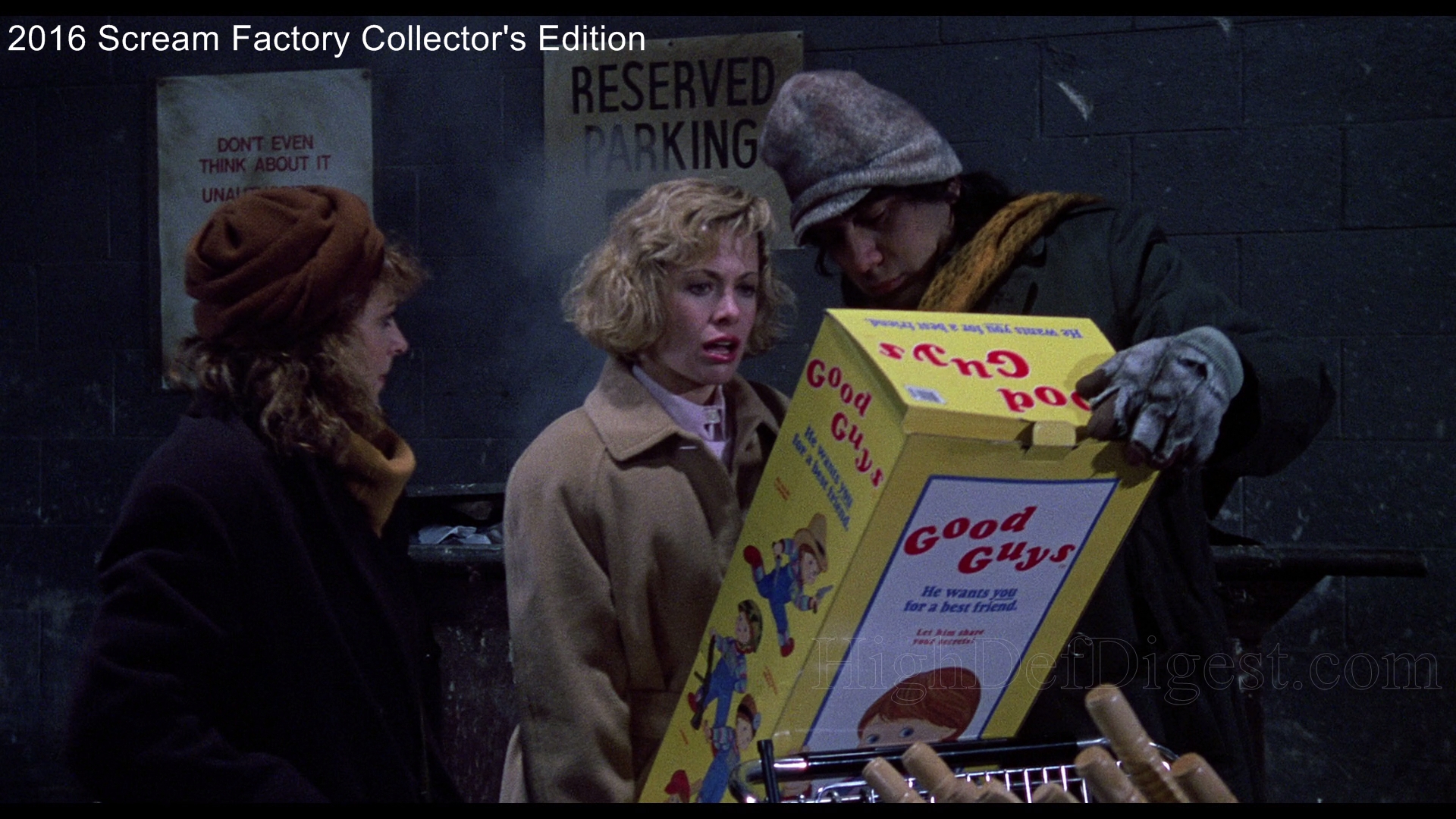 The favorite cult thriller takes a stab at home theaters with an awesome and very satisfying Dolby Atmos soundtrack, joined by the two great listening options from the previous Blu-ray release. On the whole, the new track remains a front-heavy presentation, as it should be, displaying plenty of background activity smoothly moving between the three fronts and top heights to create a pleasing half-dome soundstage. Exhibiting a notably improved mid-range that's dynamic with excellent definition and separation during the loudest segments, imaging feels broader and more expansive while Joe Renzetti's score enjoys a bit more clarity and better acoustical detailing in the orchestration.

The low-end is not particularly memorable, but there's just enough oomph and weight to provide the visuals, action and music with a palpable presence. Interestingly, the rears and heights are selectively employed, largely silent for big chunks of time, but when utilized, it is to great effect, filling the room with several subtle atmospherics like the sounds of thunder or the ricochet of bullets. Even Chucky has his moments where he scurries behind and slightly above the listening area, expanding the creepiness and generating a welcomed hemispheric soundfield. With equally strong and well-prioritized vocals that are clear and precise from start to finish, the object-based mix delivers a surprisingly excellent listen that fans will love. (Dolby Atmos Audio Rating: 82/100) 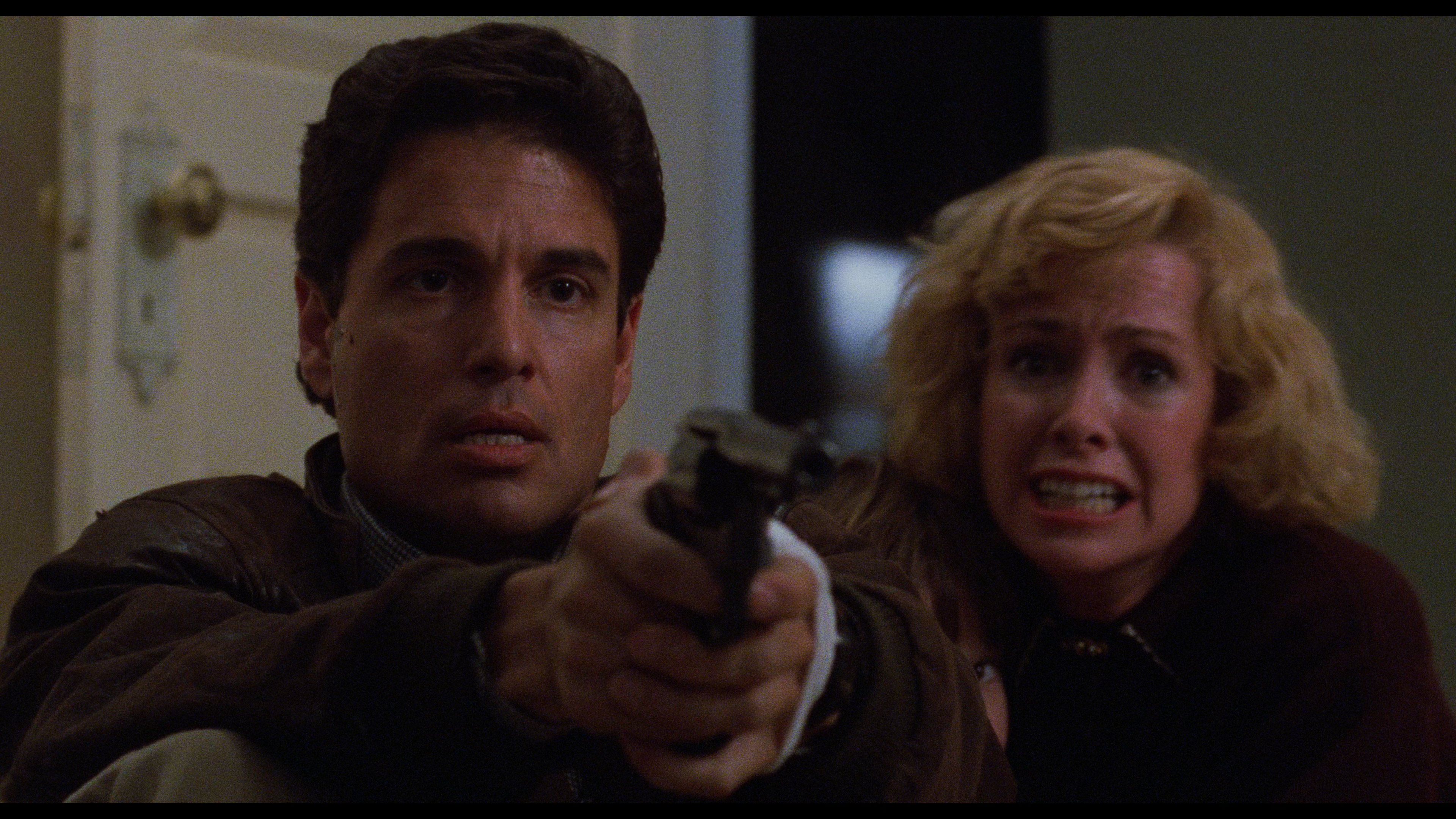 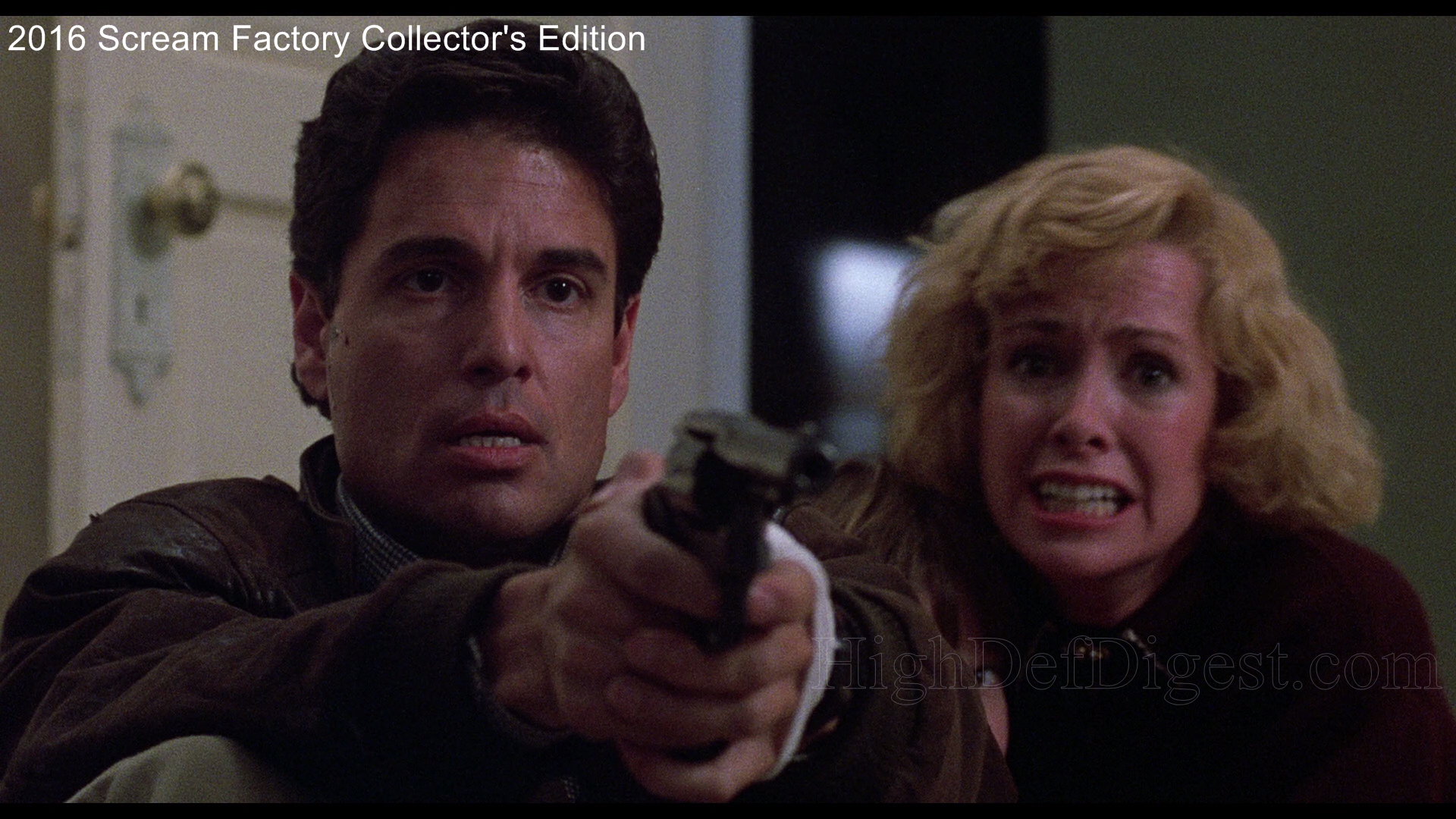 For this UHD edition, Scream Factory loads the two accompanying Blu-ray discs with the same set of supplements as before along with five more new exclusives to further tempt fans. 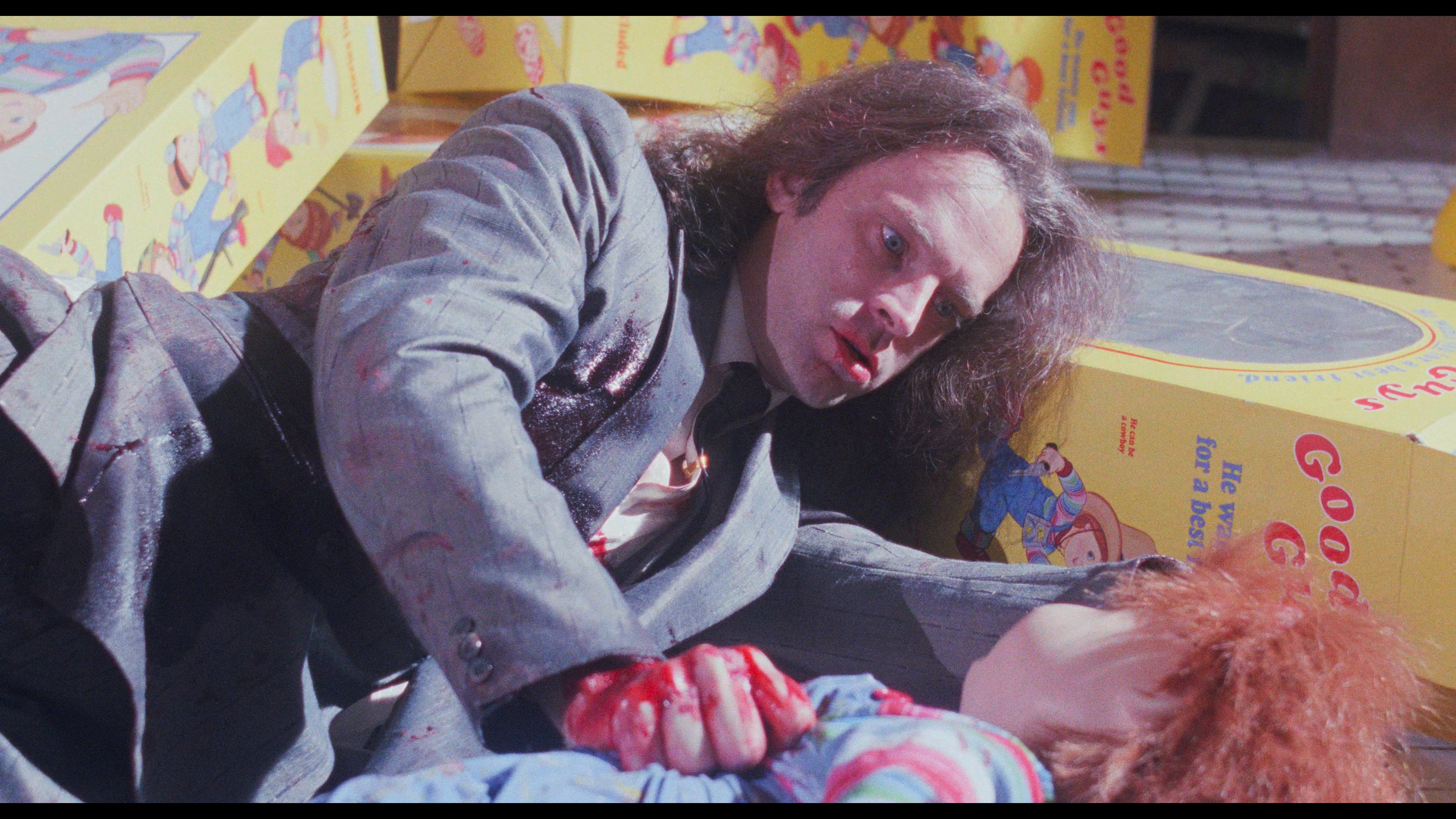 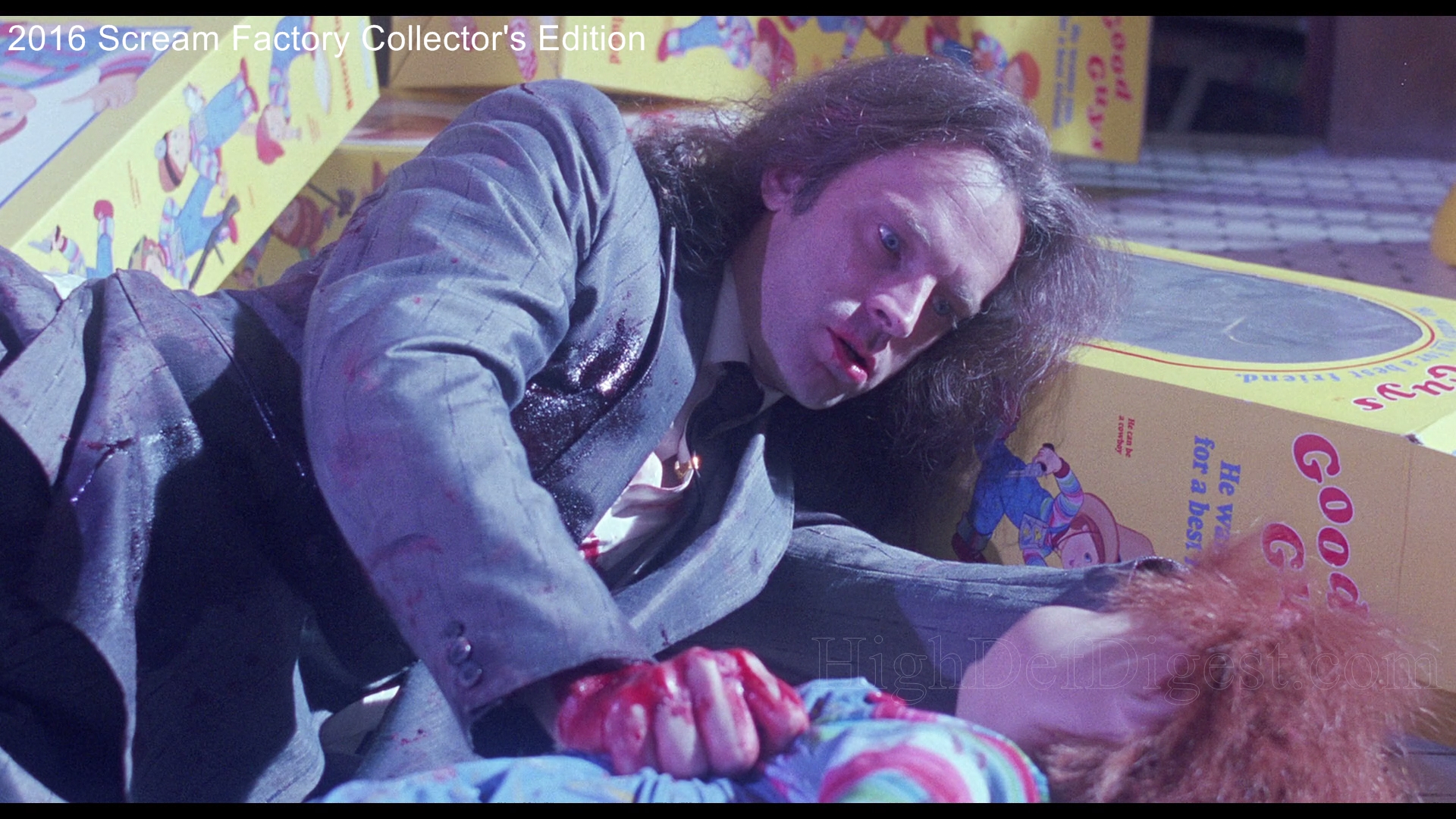 Nearly thirty-five years later, Tom Holland's Child's Play remains a fun little late-night flick on a Saturday night. The original installment to the popular franchise, which also introduced Chucky to the world of horror cinema, finally finds a friend 'til the end in the comforting arms of 4K Ultra HD with a beautifully impressive Dolby Vision HDR presentation, delivering a notable upgrade from the previous Blu-ray release. Scream Factory also culls together an awesome and satisfying Dolby Atmos soundtrack with a new set of bonus features to join the same supplements as its predecessor. Overall, the three-disc UHD collector's edition is a highly recommended treat for this post-pandemic Halloween season.