Starring Julia Roberts, Kiefer Sutherland and Kevin Bacon, Joel Schumacher's Flatliners remains an entertaining psychological thriller with an ambitious premise and a gothic visual aesthetic, but unfortunately, it fails to deliver on its promise. Courtesy of Arrow Video, this 4K Ultra HD release arrives with a highly-attractive Dolby Vision video, a pair of strong DTS-HD MA options and a healthy, exclusive selection of bonuses. Overall, this UHD edition of the cult horror favorite is a Recommended addition to the 4K HDR library.

In the world of horror, Joel Schumacher's Flatliners should be admired for his ambitious attempt to graft B-movie cliches onto grander metaphysical themes at a time when the genre was still largely focused on creatively exaggerated kills, gruesome gore, and boobs. From the outset, it promises nothing less than a journey into the afterlife and back, revealing the purpose of our existence along the way, which is a pretty tall order from a major studio bargaining for maximum box office potential. Although the end product arguably fails at completely pulling it off, credit should be given nonetheless to the filmmakers for at least trying to make a psychological horror flick actually be about something and explore some intriguing existential questions about this corporeal existence and our collective, deep-seated desire for something beyond. Still, the plot's central conceit is both its blessing and its curse, setting up really high expectations only to reveal itself as some kind of old-fashioned morality play. And eventually, it succumbs all too easily to a thematic cliche that all of the wrongs committed in life will ultimately come back to haunt us.

Nevertheless, the star power headlining this prototypical early-'90s genre feature, made for a then-aging MTV generation still addicted to fast-cut pacing and fancy camera tricks, is a big part of its success at the time and remains memorable after three decades. Kiefer Sutherland, Julia Roberts, Kevin Bacon, William Baldwin and Oliver Platt as aspiring yet daring medical students commiting reckless experiments with death create likable, fairly three-dimensional characters in what essentially amounts to B-grade material with no apparent condescension or irony. Their genuine approach to the script is ultimately what sells this story and keeps viewers invested. They are, of course, aided by the undeniably stylish and visual panache of cinematographer Jan de Bont, whose work on this production perfectly complements Schumacher's captivating camerawork, saving the picture's thematic idealism from flatlining with routine genre cliches.

For a more in-depth take on the film, check out our review of the 2014 Blu-ray HERE.

Vital Disc Stats: The Ultra HD Blu-ray
Courtesy of Arrow Video, Joel Schumacher's Flatliners has a pulse on 4K Ultra HD as a single-disc Special Edition. Housed inside a black keepcase with a slipcover, a Region Free, triple-layered UHD100 disc sits comfortably opposite a 36-page booklet featuring various color photos and two analytical essays by Amanda Reyes and Peter Tonguette. At startup, viewers are taken directly to the menu screen with full-motion clips and music playing in the background. 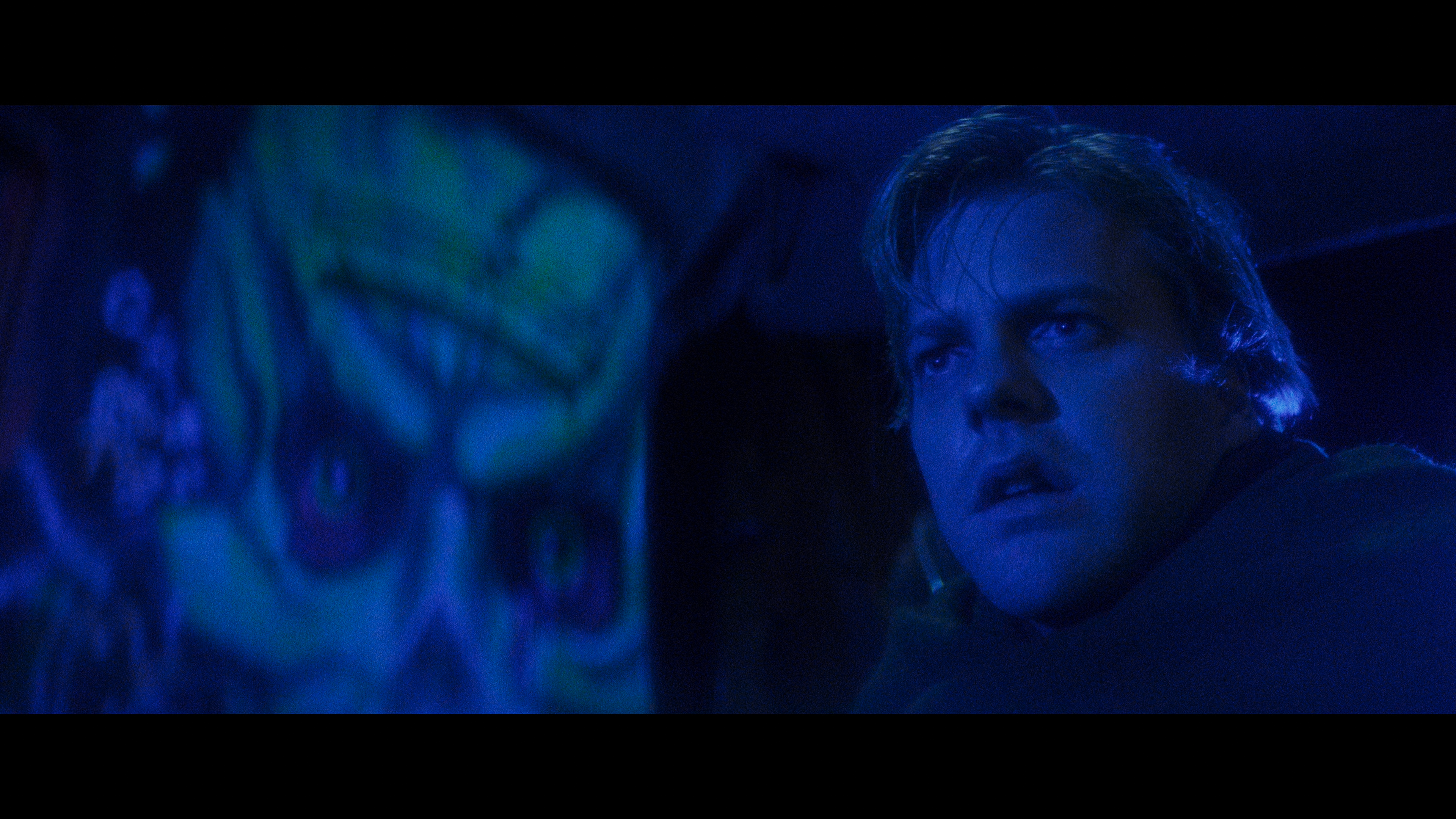 After a somewhat rough start during the opening credit sequence, the cult psychological horror flick is resuscitated for Ultra HD with a highly-attractive HEVC H.265 encode that was struck from a fresh remaster of the original 35mm camera negatives and approved by the production's cinematographer, Jan de Bont.

The native 4K transfer delivers a marked improvement over the two previous HD editions, showing sharper, cleaner details for a majority of the movie's runtime. Of course, being a heavily-stylized and relatively dark film, the video falls on the softer side of things and will not immediately compare with other releases from the same period. However, this is an inherent characteristic of the original photography and appears faithful to the filmmakers' aesthetic intent, but the picture maintains excellent, consistent fidelity throughout with a fine layer of visible grain, furnishing it with an attractive film-like quality. Individual hairs are distinct, the stitching and threading in the clothing are discrete, and the gothic architectural features of the building are plain to make out.

The Dolby Vision HDR presentation also comes with a more vibrant selection of full-bodied colors, such as the hypnotically glowing neon hues during Nelson's initial hallucination. The creepily trippy visuals and several other scenes are often bathed in electrifying cobalt blues, deep crimson reds and vivid fiery oranges. Facial complexions come with more natural, peachy-rose tones in the cast and revealing, lifelike textures. It may not immediately look it, but contrast also enjoys a notable boost and a more dynamic appeal, boasting cleaner, more accurate whites and crisp, radiant specular highlights that allow for better visibility of the finer aspects within the hottest spots. Black levels are richer with silkier, darker shadows while maintaining strong details within the murkiest, gloomiest moments, providing the 2.39:1 image a lovely cinematic appeal. (Dolby Vision HDR Video Rating: 80/100) 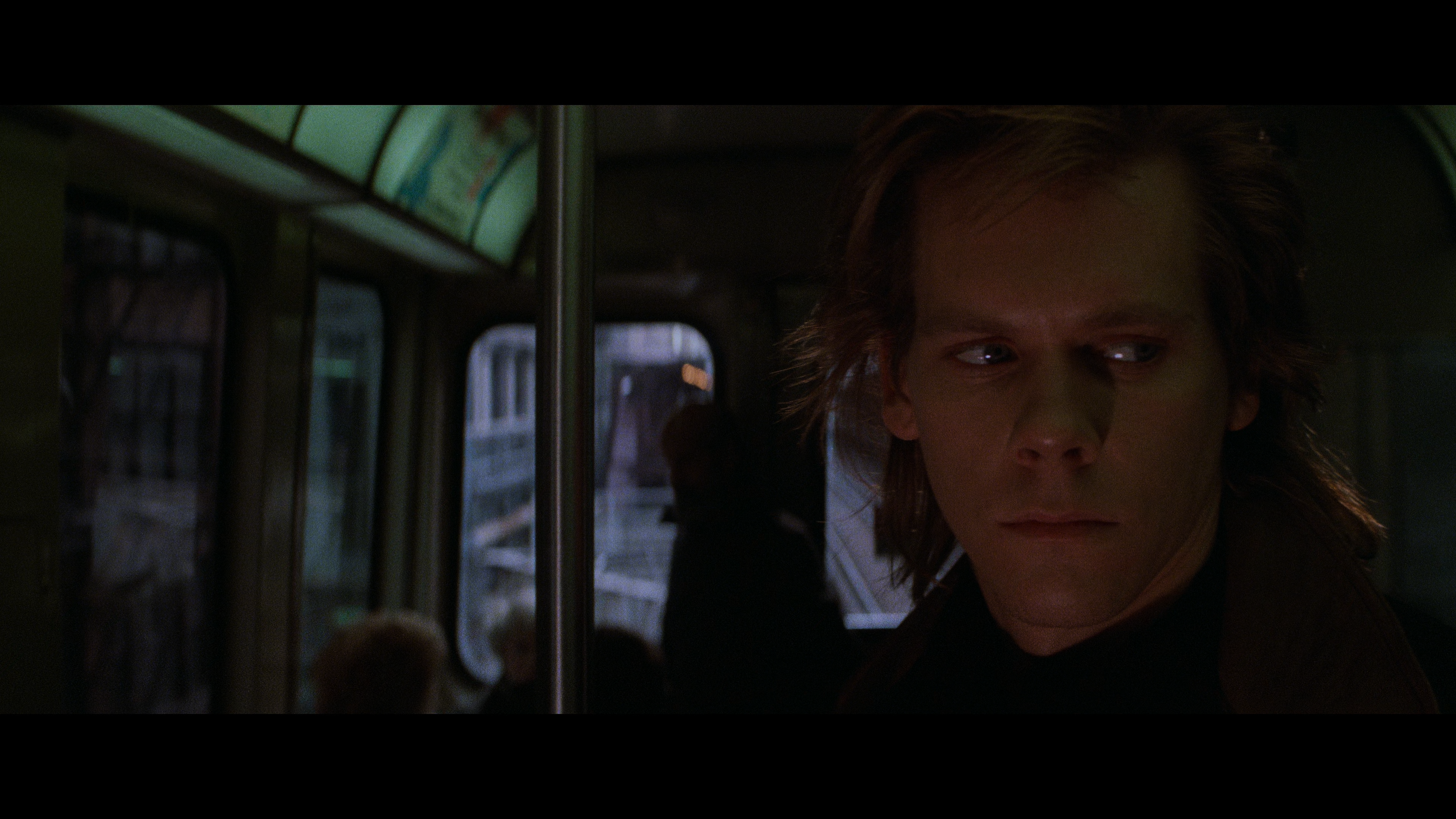 For this UHD edition, Arrow has also upgraded the audio to two DTS-HD Master Audio options: a 2.0 stereo track and a 5.1 surround remix. Coming from the LPCM and legacy Dolby Digital tracks enjoyed on the previous Blu-rays, either option is a good, welcomed improvement, but sadly, it's not a noteworthy step-up or at least, nothing really memorable, offering little to boast about comparatively. More than likely, this is due to the original sound design and not an issue with the codec itself because the mid-range is slightly more dynamic with better acoustical detailing during the loudest segments, and James Newton Howard's score benefits from a more pleasing sense of fidelity in the orchestration. However, for a majority of the time, imaging remains largely uniform and somewhat limited with little happening in the upper ranges. But movement across the fronts and background activity provide the soundstage with a wider presence and balance with pleasing separation and clarity. Unfortunately, the low-end is mostly listless and bland, failing to give the music or bits of action any weight. Nevertheless, with strong, well-prioritized vocals, the front-heavy lossless mix is an acceptable and strong companion piece. (Audio Rating: 72/100) 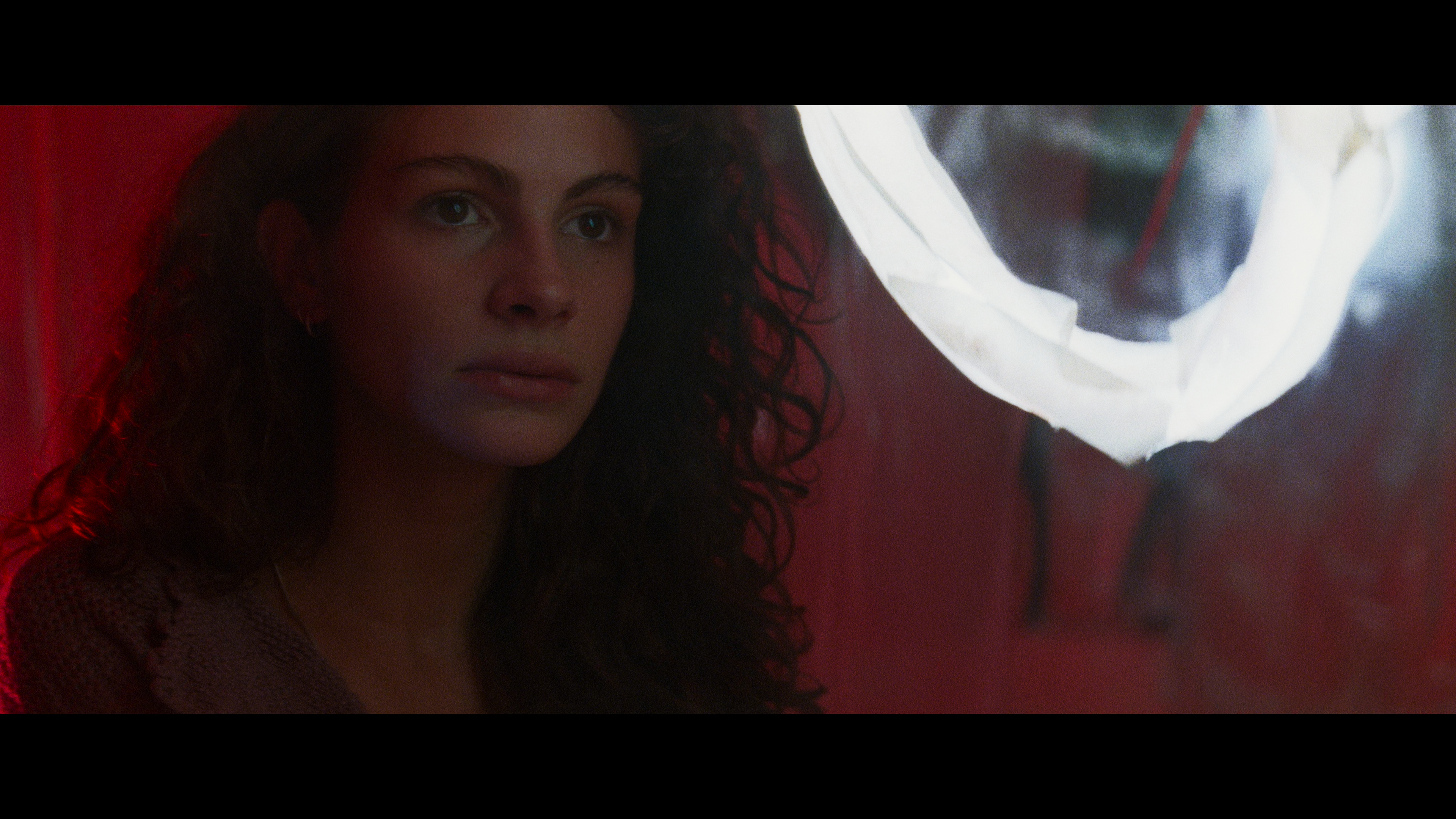 The folks at Arrow Video have culled together a nice assortment of bonus features, which are all new and exclusive to both this UHD edition and the Blu-ray release. 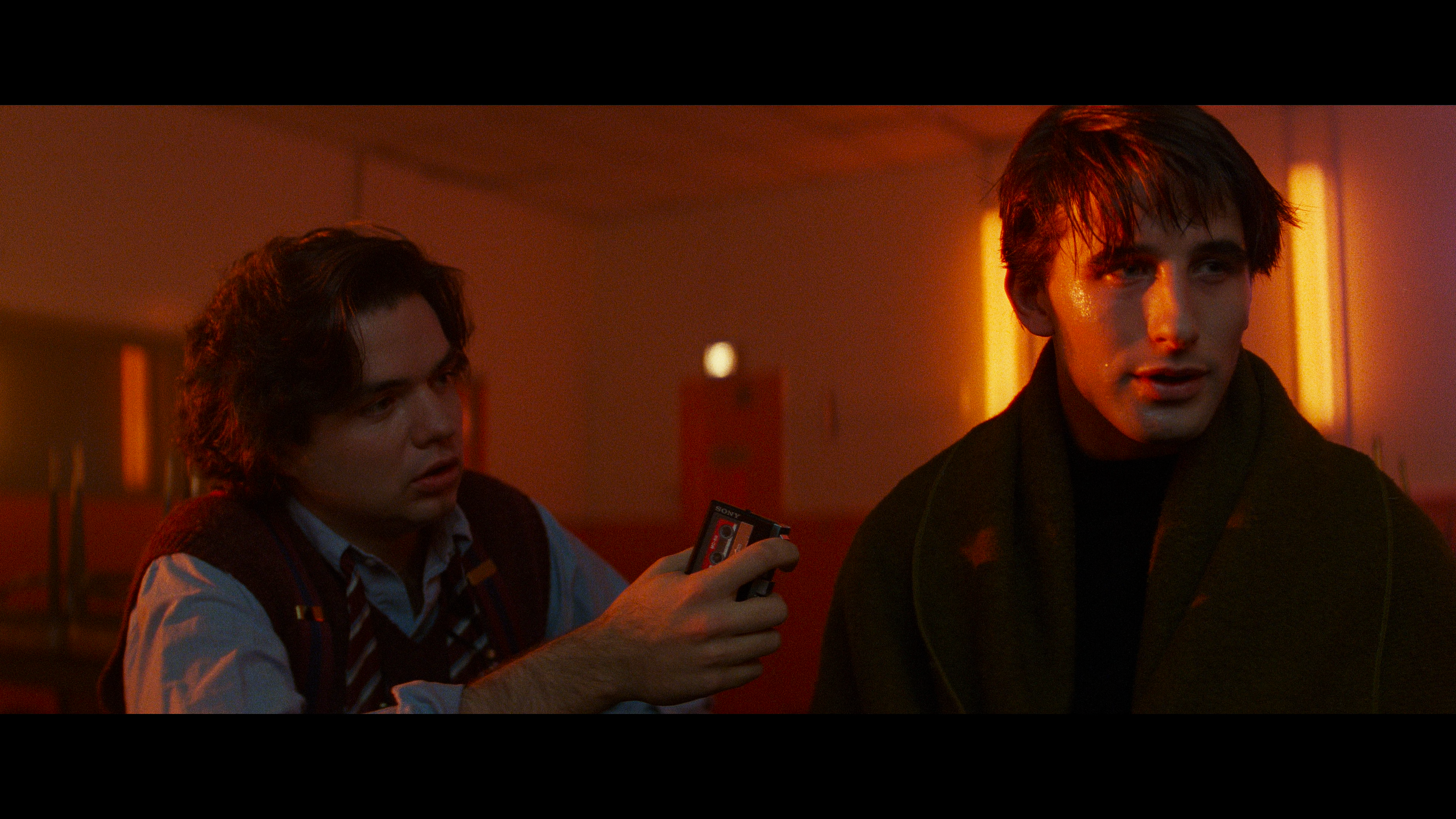 Joel Schumacher's Flatliners is an entertaining psychological thriller with a very intriguing and ambitious premise, but ultimately, it fails to deliver on the promise of its setup. Nevertheless, it is notable for its all-star cast in Julia Roberts, Kiefer Sutherland and Kevin Bacon, as well for its exercise in flashy style and gothic visual aesthetic. Courtesy of Arrow Video, this 4K Ultra HD release of the cult horror favorite comes with a highly-attractive Dolby Vision HDR presentation, offering a notable improvement over its HD SDR predecessors, but the two DTS-HD Master Audio options deliver a small step-up from the previous Blu-ray soundtracks. Arrow has also culled together a healthy selection of bonuses that are exclusive to this release, making this UHD edition a recommended addition to the 4K HDR library.