Indiana Jones continues his spectacular Nazi-punching adventures with Indiana Jones and the Last Crusade - and this time dear old dad is joining the fight against the fascist hoard. Harrison Ford and Sean Connery light up the screen in this third entry in the beloved franchise. After a successful run as a complete franchise collection, Paramount Home Entertainment gives fans a fitting solo 4K Ultra HD Blu-ray SteelBook release replicating the classic theatrical and home video artwork. The disc offers an incredible A/V presentation, but aside from the trailer is void of any bonus features. All the same, this is a Highly Recommended release!

For the third installment in the Indiana Jones adventures, Spielberg and Lucas change the mood once more but with far better results, effectively rinsing away the awkward aftertaste of the previous entry. For The Last Crusade, they revisit many of the same ingredients that made the first feature a beloved classic, particularly the return of the Nazis and Hitler's pursuit of occult-related artifacts. And on top of that, they add a welcomed twist to the series with Sean Connery joining the adventures as Indy's father, bringing a great deal of comedy to the mix and making the movie almost equal to Raiders. This father-son element is made all the more memorable with a prologue that shows an early adventure, possibly the first, with a young Indiana Jones (River Phoenix) battling treasure hunters. In this pseudo origin story, of sorts, we essentially learn of Indy's inspiration for archeology, the scar on his chin, his phobia of snakes and the fedora hat that has become the character's iconic signature style.

In keeping with the high-spirited hijinks of its predecessors, the second sequel again involves the hunt for an ancient religious artifact believed to possess mystical, supernatural properties. And this time, it's the holy grail of archeological finds. Literally! Unlike the first two, however, this quest for the King Arthur legend adds a deeper, more poignant meaning to the overall story by serving as a clever metaphor for our hero reconciling with his distant father. On an even grander scale, the theme takes on a worldlier, corporeal significance because the spiritual search for God and faith is really about fathers and sons. To achieve this tearful reunion, the filmmakers have Indy and his father take part in the same idealistic pilgrimage. Together, they must resolve their feud in order to duel with a powerful and evil force that seeks to divide rather than unite, making this adventure Indy's most challenging yet. (Movie Rating: 4.5/5) 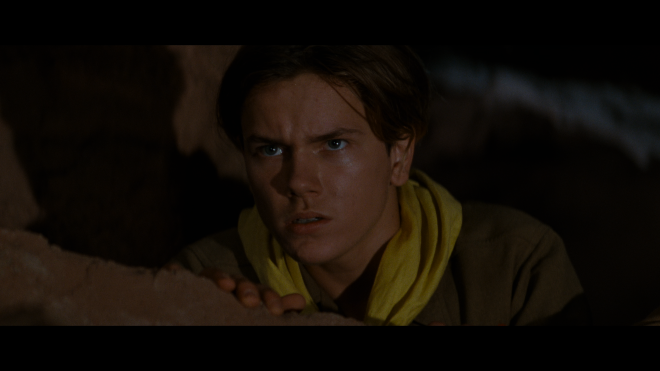 Vital Disc Stats: The 4K Ultra HD Blu-ray SteelBook
Indiana Jones and the Last Crusade returns for another gallop onto 4K Ultra HD Blu-ray, this time as an all-new single-disc 4K UHD + Digital SteelBook. Unlike the previous 4-film SteelBook set, this outing gives fans what they always wanted (beyond the Holy Grail) restoring the classic theatrical poster and original home video artwork. The disc itself is identical to the previous release right down to the disc art. 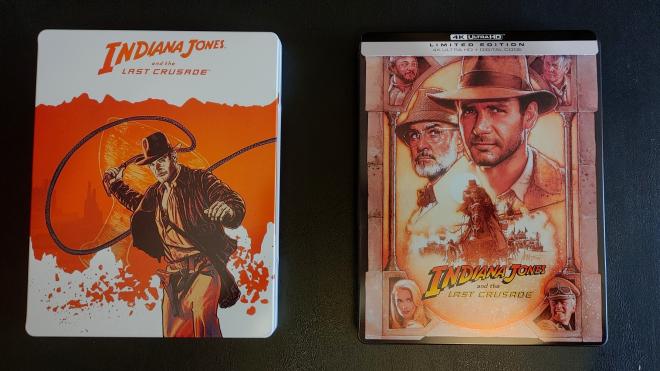 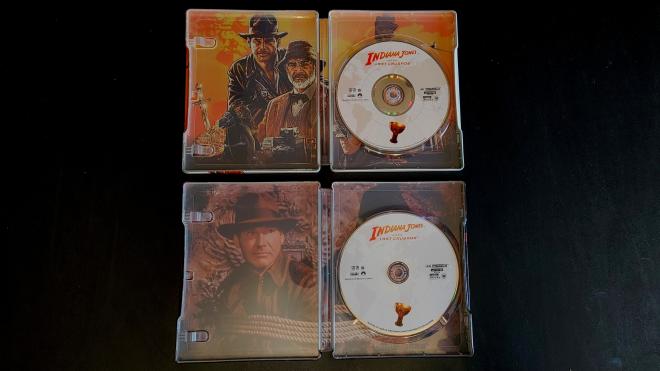 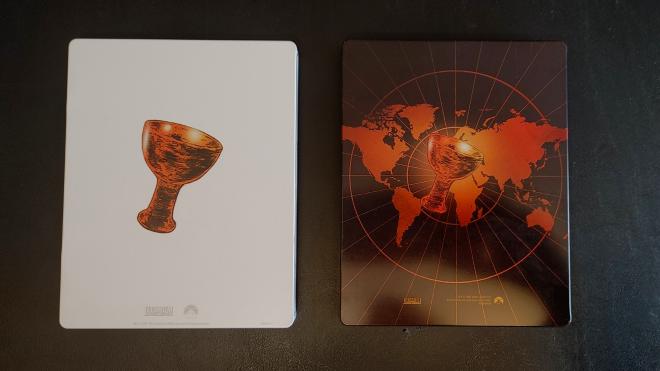 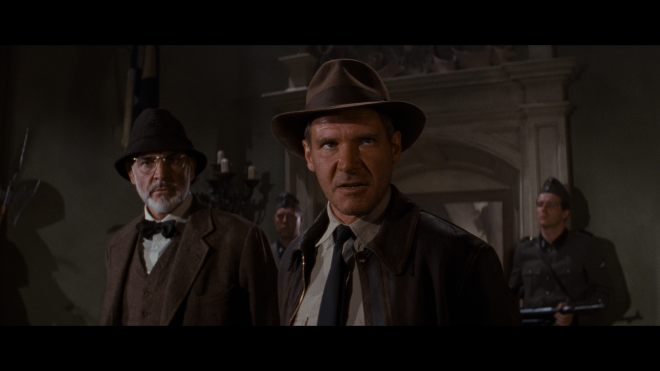 Of the original trilogy, it's not surprising that the third installment rides into Ultra HD looking its best thanks to a fresh remaster of the OCN, aside from some negligible, age-related softness here and there. On the whole, the new HEVC H.265 encode is a magnificent and often stunning upgrade over its Blu-ray predecessor, showing razor-sharp details in the Nazi uniforms, the armored vehicles and the many exotic locations. Speaking of which, the desert scenes in Hatay are simply beautiful, exposing individual pebbles, tiny rocks and every crevice in the rock formations with striking clarity. All the while, brightness levels supply rich, inky blacks with excellent gradational details within the darkest corners and with notable differences in the various shades. With a consistent thin layer of natural grain throughout, the 2.35:1 image arrives with a gorgeous, attractive film-like quality that fans will absolutely love. 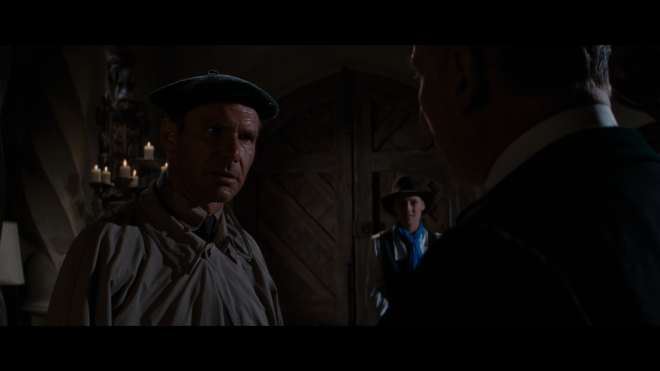 Extending its life further is a subtly boosted but nonetheless more vibrant palette that energizes the action with a wider range of colors. The Dolby Vision HDR presentation displays a fuller, more spirited selection of primaries, from the deep crimson reds of the swastika flags to the cheerfully animated greens and lovely cerulean blues in the Austrian scenes. Better still is a sumptuous array of deep caramel browns, golden yellows and sandy tans during the film's second half in the desert, and scenes with fire and torches brighten the screen in a vibrant tiger orange glow. An improved contrast balance also adds a rejuvenated appeal to the visuals with crunchier, invigorated whites while specular highlights provide a tighter, crisp brilliance along the edge of the clouds and a vivid, realistic sheen to metallic surfaces. At the same time, facial complexions appear natural and more accurate to the climate with rosy peachiness and lifelike textures, exposing every pore, wrinkle and trivial blemish. (Video Rating: 92/100) 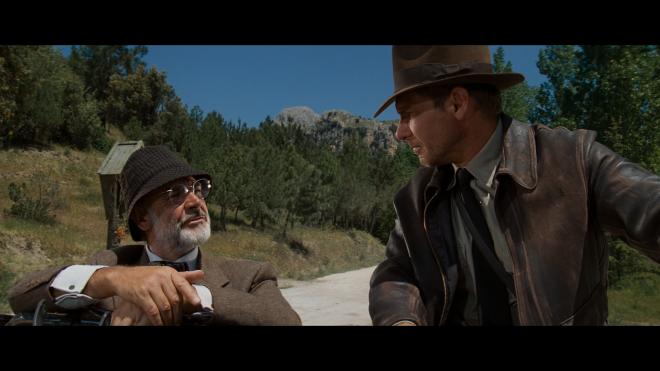 As with the other movies, this Atmos track remains true to its original front-heavy design, except that there's a bit more consistency in the surrounds and rears. Several ambient effects bounce around between the sides and overheads with convincingly directionality and placement while other atmospherics subtly echo all around, like the blimp and airplane sequences. Adding to a satisfyingly immersive soundfield are Williams' classic motifs spreading all around and above the listening areas, sure to keep viewers engaged and in the middle of the moment. On top of that, the extra-breathing room displays a cleaner and better-defined mid-range, exhibiting superb warmth and separation in the upper frequencies. With a broad and expansive soundstage thanks to a variety of background activity effectively moving into the off-screen space, dialogue reproduction is precise and crystal clear from beginning to end. Like the other two, the low-end adds a weighty response to gunshots, explosions and cannon fire, supplying a welcomed sense of presence to the visuals. (Audio Rating: 90/100) 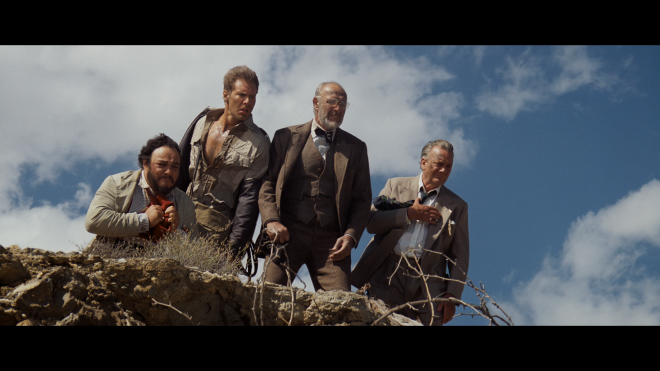 Once again, without that extra bonus features disc from the complete adventure collection, all you're getting is trailers. 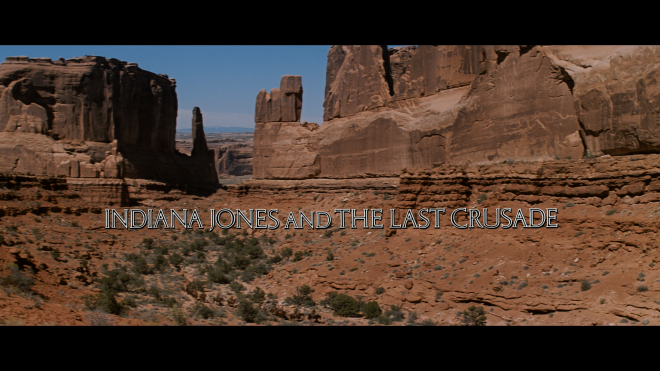 In 1989, Harrison Ford effectively ended his tenure as the man in the hat. Throughout the 90s several attempts to send Indy on a fourth adventure stuttered and stopped and Indiana Jones and the Last Crusade proved to be the perfect trilogy conclusion. But in Hollywood trilogies never come in threes and an entertaining albeit dodgy fourth film finally came out. Now with a fifth and apparently truly final Indiana Jones film releasing in 2023, fans can bask in the glory of this classic franchise in 4K Ultra HD Blu-ray with an exceptional Dolby Vision transfer and Atmos audio track. Now to sweeten the deal for fans who didn't grab the complete collection set, Paramount is reissuing each film with a solo disc release with SteelBook packaging that restores the iconic original poster and home video release artwork. If you're satisfied with the previous set, there's no reason to upgrade beyond artwork. If you've yet to grab these films on 4K, this is the way to go for another attractive piece for the shelf - Highly Recommended.