Starring Yahya Abdul-Mateen II, Jake Gyllenhaal and Eiza González, Michael Bay's latest rowdy spectacle Ambulance has its shortcomings but is nonetheless a fun, mindless popcorn spectacular with lots of white-knuckle thrills. The action flick crashes into 4K Ultra HD with a reference-quality Dolby Vision video, a demo-worthy Dobly Atmos track but a disappointingly small collection of bonuses. Nevertheless, the overall UHD package is worth a look and Recommended for action fans hungry for some awesome 4K HDR goodness.

Just as quickly as Ambulance hurtles into a bombastically garish display of action pandemonium, Michael Bay's latest rowdy spectacle of trivial style over hollow substance is as easily forgotten. Much like the police chases shown on live media streams, only the arbitrary flashes and highlights of the chase itself are remembered after a while, mostly the high points involving the outrageous collisions and random acts of violence, which are in abundance here. The story and specific events leading up to the chase are, honestly, of little consequence or pertinence, outside of a flimsy attempt to ground the plot or give the characters a rather superficial motive for justifying a heavily armed bank heist. There is rarely a moment where Bay's signature camerawork, of which there is also a heavy abundance, ever allows the audience or characters to really cope or come to grips with how quickly everything has spiraled out of hand.

At the center of this rousing thrill ride through the congested streets of Los Angeles is military vet Will (Yahya Abdul-Mateen II), who has been pressured into participating in the robbery because he needs the money for his wife's experimental surgery that was denied by their insurance company. Within a matter of minutes, his introduction and family's tragic predicament immediately reveals Bay's shortcomings as a narrative filmmaker, compensating for that lack with highly-stylized visuals and ornately brash camerawork that never actually serves the story. Or as in this specific case, a massive exposition dump hammers over the audience's head that our very reluctant but nonetheless soon-to-be criminal is really a good guy unjustly caught in a moral dilemma, which by the way is never fully addressed or dealt with in any meaningful way. In fact, he's granted the laziest, most unsatisfying outs, a second chance that's frankly laughably dumb. 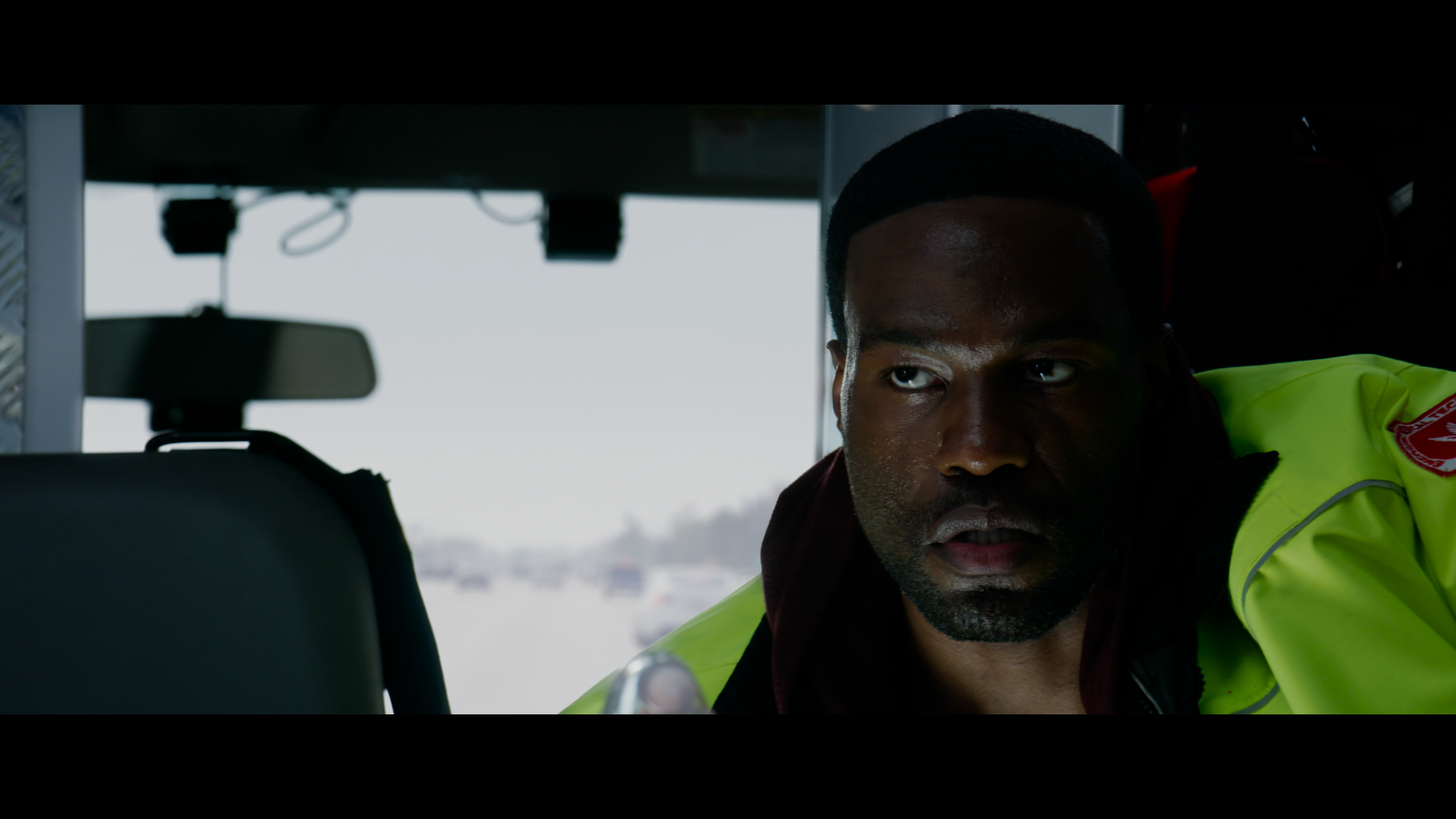 Opposite Abdul-Mateen's Will is his older brother Danny (Jake Gyllenhaal), who convinced Will to rob the bank with the promise that Danny has never failed him before . . . until now, of course. Other than being solely responsible for Will's life spiraling into chaos and the mastermind (?) behind the heist, it's never entirely clear what Gyllenhaal or his character are doing here with a somewhat confusing performance of a raging sociopath. Gyllenhaal's Danny is basically Bay's eccentrically over-the-top camerawork come to life. Dragged into the middle of this mess and sibling squabbling is EMT Cam Thompson (Eiza González), who spends a good chunk of the time looking just as baffled as the audience, both by Danny as by a straightforward, high-concept plot blown into Bayhem excess. In her own road to redemption, Cam is ultimately used as a prop to blatantly drive home some jingoistic appreciation for first responders, but in Bay's hands, what should have been a heartfelt conclusion comes off unearned, obligatory and eye-rollingly corny.

Yet, in spite of all my grumbling objections, I must admit that I still had a good time with Ambulance, a remake of the 2005 Danish film of the same name. As a fun, mindless popcorn spectacle, Bay accomplishes what he set out to do from the start — a thrill-a-minute, white-knuckle spectacular. At its best, the production largely feels reminiscent of his early feature films when he was collaborating with Jerry Bruckheimer. The movie suffers a bit from the rapid-fire editing and outlandish camerawork that's, unfortunately, become typical of Bay's work since Bad Boys II, but the action is nonetheless comprehensible and exciting, as though learning from what worked in his war drama 13 Hours. Arguably, all that's missing is a Bruckheimer to restrain Bay's worse inclinations to turn this into the harrowing, character-driven, action-packed tale it so clearly wants to be.

Universal Pictures Home Entertainment brings Michael Bay's Ambulance to 4K Ultra HD as a two-disc combo pack with a Digital Copy code and dubbed the "Collector's Edition." When redeeming said code, owners are granted access to the 4K UHD version in Dolby Vision HDR and Dolby Atmos audio. The Region Free, triple-layered UHD100 and Region Free, BD50 discs sit comfortably on the opposing panels of a black, eco-elite keepcase with a glossy, lightly-embossed slipcover. At startup, viewers are taken to a static screen with the usual menu options along the bottom, quick access to the bonuses on the right and music playing in the background. 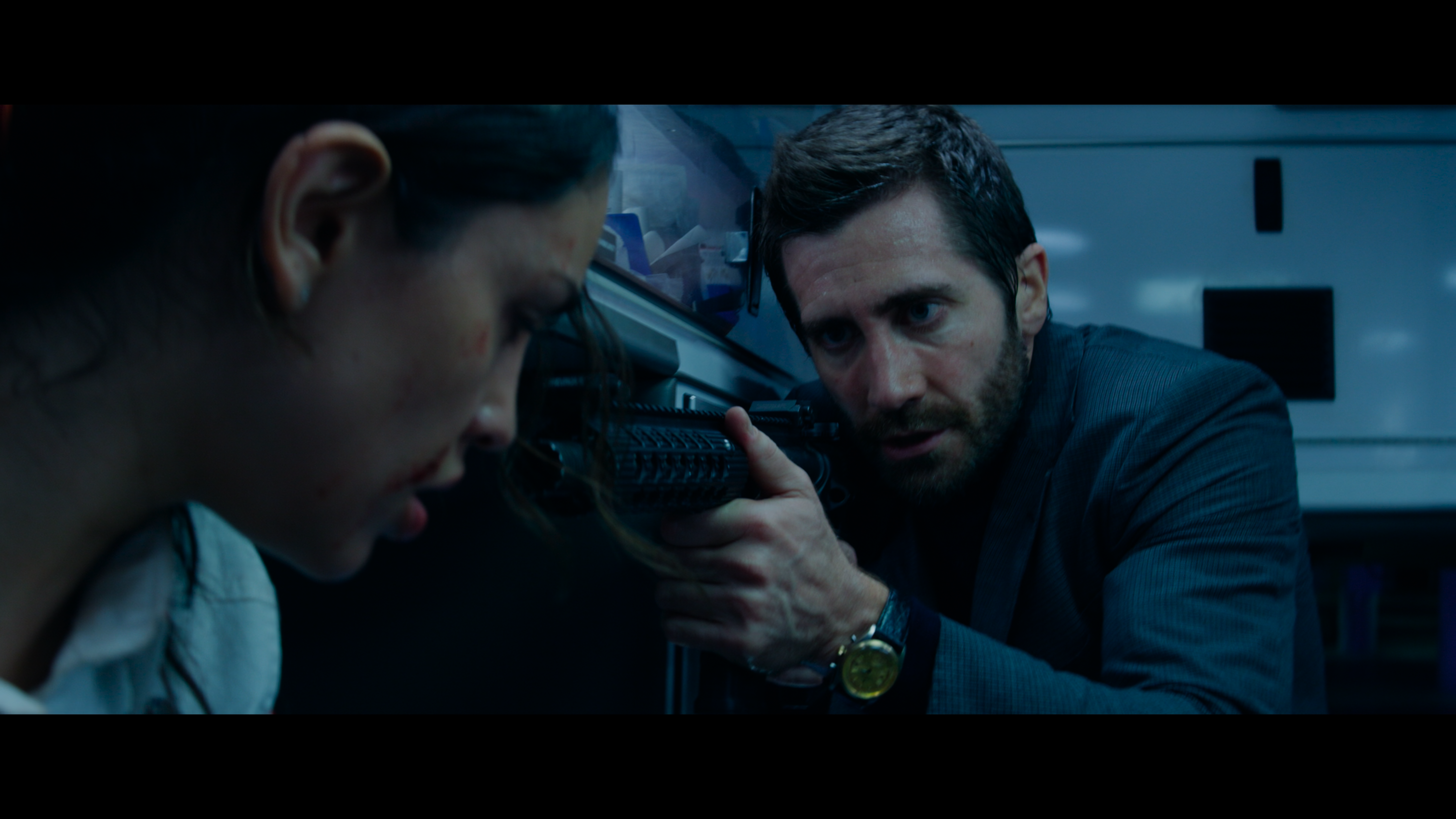 The pulse-pounding action thriller races to Ultra HD with a dazzling, reference-quality HEVC H.265 encode, struck directly from a pair of RED camera sources capable of 6K and 8K resolutions. From start to finish, the freshly-minted, native 4K transfer boasts razor-sharp details, exposing the minute scratches on all the vehicles, the cracks and pockmarks in the city streets and buildings, and the smallest objects decorating the inside of the ambulance. Even during the fast-paced action and editing, the tiniest pieces of debris and rubble from explosions and wreckage remain distinct and unmistakable as they fly across the screen. Facial complexions are highly revealing with striking lifelike textures, laying bare every pore and negligible blemish in the faces of the cast while showing a healthy, rosy-peach skin tone that's true to life.

Furthermore, the Dolby Vision HDR presentation cranks Bay's signature visual style up to eleven as the orange-teal photography bathes the action in sumptuous primaries, like the richly animated reds ranging from the dark ruby shades in the blood to the vivid crimson rose in the siren lights. Secondary hues are equally impressive, igniting the screen with a varied array of lively colors, from the fiery oranges of explosions and warm marigold yellows of LA sunshine to the spirited hints of pinks and purples in the background, along with a dynamic variety of neon colors like the chartreuse-painted ambulance.

All the while, the visuals are continuously saturated in richer, more velvety black levels, supplying every scene with outstanding gradational differences in the various shades. And succulent, silky shadows penetrate deep into the screen with excellent visibility in the darkest, murkiest corners and a few poorly-lit interiors, providing the 2.35:1 image with a gorgeous three-dimensional, cinematic appeal. The highly-stylized photography also arrives with a spot-on, right-on-the-money contrast balance, furnishing every moment with resplendent, pitch-perfect whites, most notably in the breathtaking scenic aerial photos of Los Angeles. The more appreciable upgrade is the crisp, radiant specular highlights, supplying the action with a strikingly tighter, narrower glow, allowing for significantly better detailing within the hottest spots, like the siren lights, while the metallic surfaces of various vehicles glisten with photorealism under the hot sun. (Dolby Vision HDR Video Rating: 98/100) 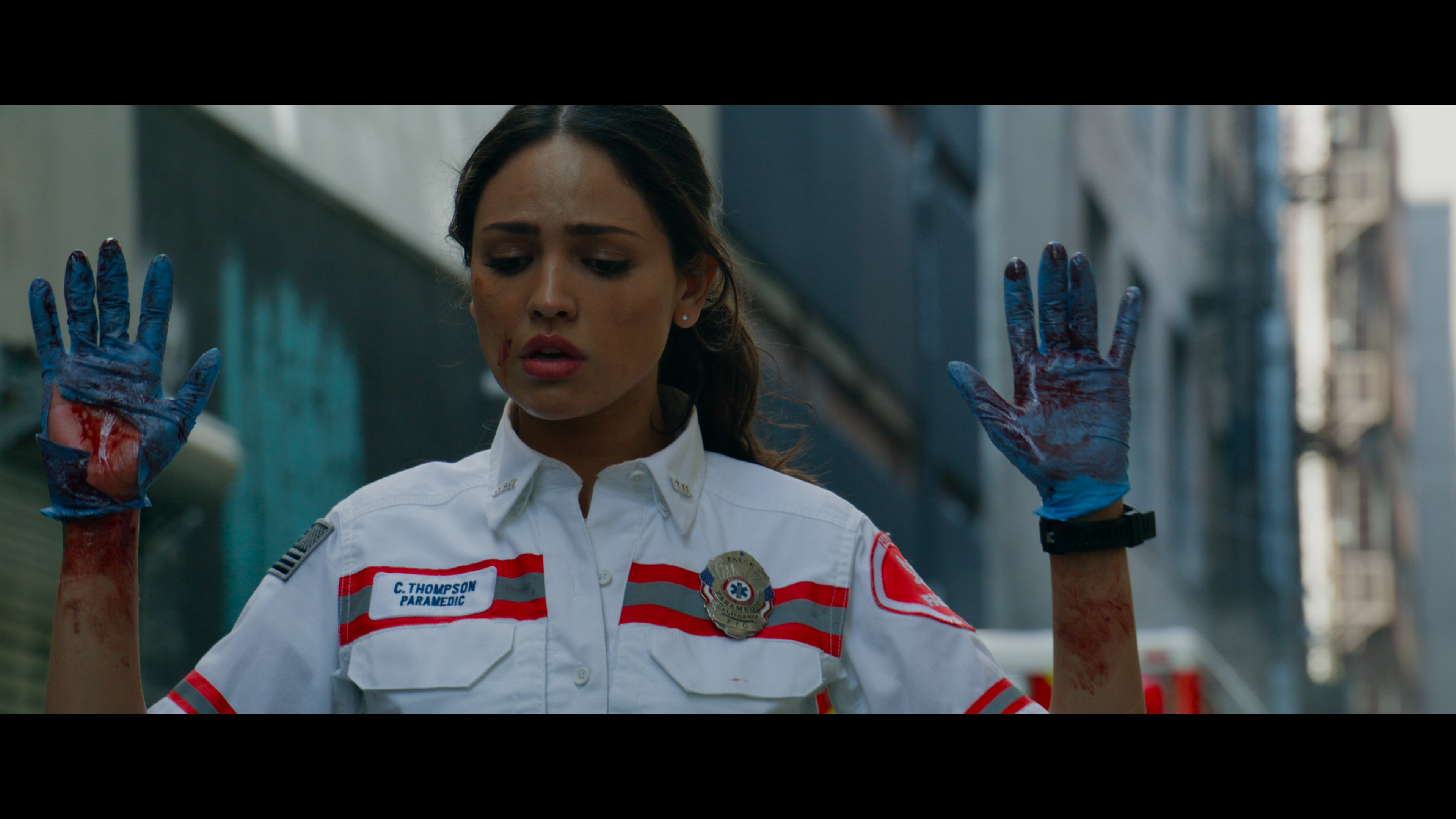 The typical Bayhem spectacular crashes into home theaters with a fantastic, demo-worthy Dolby Atmos soundtrack, one that is almost consistently bombarding the listener with chaotic noise both inside and outside the ambulance.

Of course, a majority of the action is spread across the fronts where a variety of background activity effortlessly and convincingly moves between the three channels, into the top heights and the off-screen space, creating an incredibly broad and spacious half-dome soundstage from start to finish. Amid the mayhem, an extensive dynamic range maintains extraordinary clarity and definition during the loudest, most vehement segments, exhibiting demo-worthy distinction in the upper frequencies while Lorne Balfe's score sustains striking separation and acoustical detailing. Even in the thick of it, dialogue always remains clear and precise, retaining priority above the loud confusion.

The side and rear channels are also employed often and fairly active for most of the runtime, consisting largely of the hustle-and-bustle commotion of the city. Most of this activity is subtle and in the distance but effective nonetheless for an engaging, enveloping soundscape, and it is periodically interrupted by the sound of sirens blaring from either side as they race to the screen. Likewise, the ceiling heights are engaged similarly to the surrounds but in a far more faint and delicate manner, mostly reserved for the ringing echo of gunshot blasts and various other mild ambient effects, such as the noise of city traffic. Of course, they are noticeably more active during the many action sequences with debris blasting in every direction and raining down from above. Once the helicopters are involved in the chase, the design opens into an awesomely immersive hemispheric soundfield as various helicopters discretely and flawlessly pan overhead.

Personally, the low end is not quite as aggressive and authoritative as I would prefer or even as the visuals would suggest, stalling at 30Hz at best but mostly hovers around the 40Hz range (bass chart). Nevertheless, the midbass is plenty potent and powerful to shake the couch in several scenes while supplying the action with effective weight and presence. (Dolby Atmos Audio Rating: 96/100) 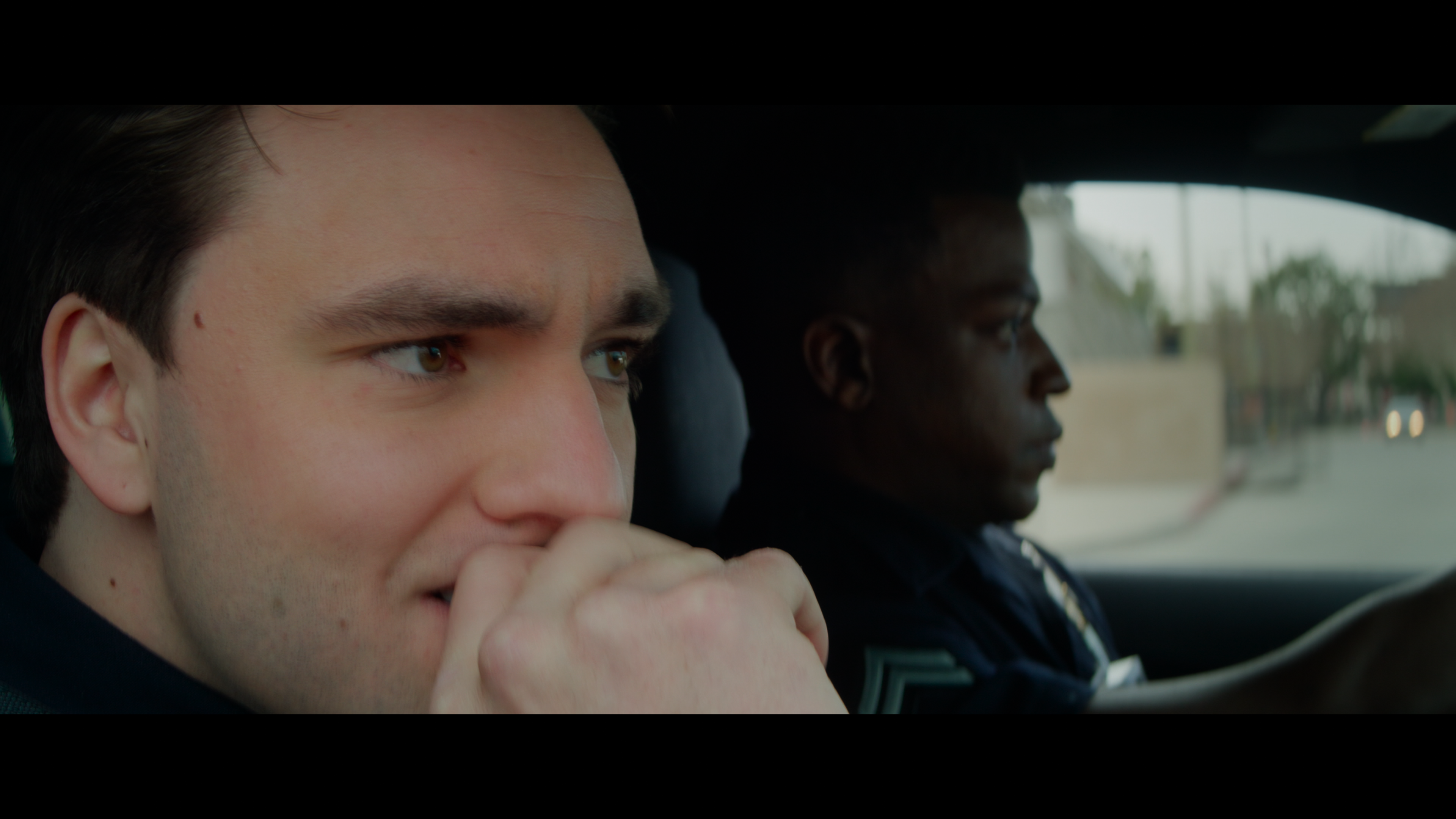 The same set of supplements in this UHD edition is shared with its Blu-ray counterpart. 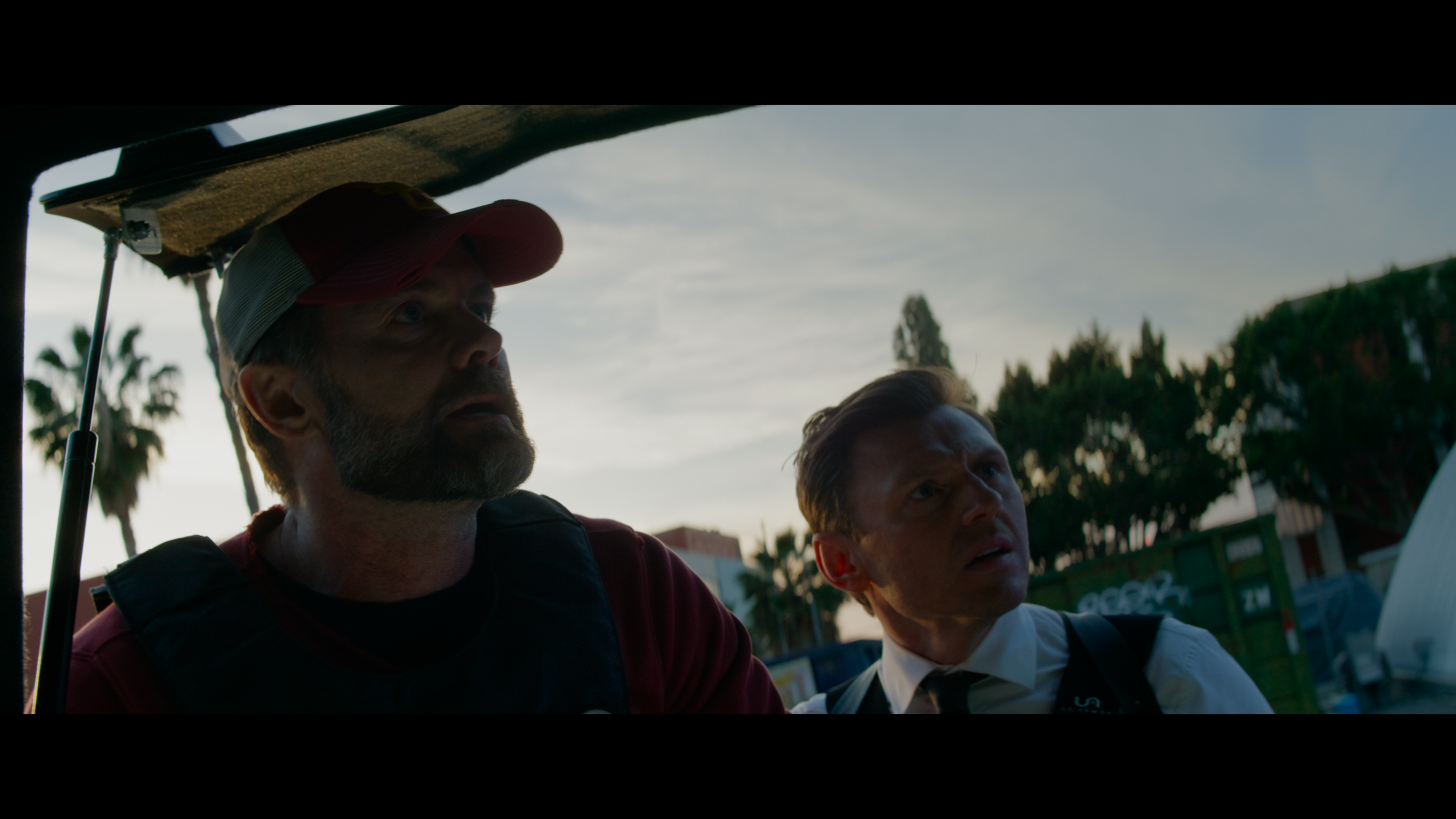 Michael Bay's latest rowdy spectacle Ambulance is ultimately the filmmaker's usual bombastically garish display of trivial style over hollow substance, starring Yahya Abdul-Mateen II, Jake Gyllenhaal and Eiza González. Amazingly, whatever its shortcomings and failure to capture the heartfelt drama at the plot's core, Bay nonetheless delivers a fun, mindless popcorn spectacular with lots of white-knuckle thrills that feels reminiscent of earlier works. The action flick crashes into 4K Ultra HD with a phenomenal, reference-quality Dolby Vision HDR presentation and an exceptional, demo-worthy Dobly Atmos soundtrack. In spite of a disappointingly small collection of bonuses, the overall UHD package is worth a look and recommended for Bay fans hungry for some awesome 4K eye candy.