Pixar once again proves they are the premier division in Disney’s cabal of family-friendly entertainment with Turning Red. This delightful and often hilarious coming-of-age story is instantly relatable with heavy themes about growing up and breaking away from family traditions and expectations while also dealing with those changes as a parent. Now on 4K Ultra HD Blu-ray, the film scores with a magnificent HDR10 transfer, a mediocre Atmos track, and some worthwhile bonus features. If you like your movies on the shelf instead of the streaming queue, Turning Red is Highly Recommended

[Excerpt from Bryan’s excellent Film Review]
“With these numerous aspects of growing up, it's easy to see how this film is a love letter from Shi to her family, when she grew up where she walks that razor-sharp edge of honoring the family lineage and gaining her own freedom and creative independence. While Ming just wants to do right by her daughter, she can come across as an over-the-top helicopter parent at times, but her intentions, however crazy they may be, still are rooted in love for her child. Mei's father more or less plays the Silent Bob character throughout, always delivering quiet thoughts of wisdom to his daughter in a fun way. Additionally, Turning Red is as much about teen friendships as it is about relationships with parents. Mei's four friends all come from different backgrounds and have distinct personalities that were very poignant of 2002 with great comedic and nostalgic effects. Its diverse cast of characters is most welcome and brought to life wonderfully.” 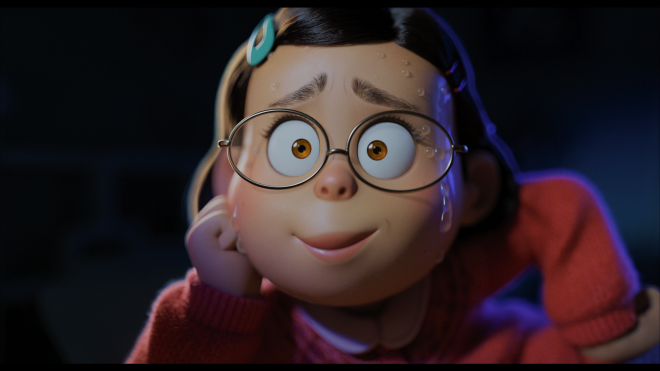 For myself as a parent with a rambunctious two-year-old boy that has hopes and dreams for him, Turning Red is an emotional gut-punch reminder that your kids aren’t going to be you. They will be them. While suitably hilarious and beautifully animated, director and co-writer Domee Shi crafts a perfectly beautiful family drama/comedy. It reflects her own life growing up in Toronto but it’s easily relatable to anyone who was ever a hormonal teenager on the cusp of puberty with adulthood barreling down upon them like a freight train. You also don’t have to be a “dragon mom” or a “helicopter parent” for this film to hit home. You can relate to Meilin Lee (Rosalie Chiang) and her mother Ming (Sandra Oh) while also relating to the often silent but sage father Jin (Orion Lee) who just wants his kid to be genuinely happy.

Where I especially love this film is its depiction of overbearing and demanding parents. I’m still early in the game so I’m pleased as punch when my boy recites his favorite Octonauts songs. I understand and empathize with parents wanting the best for their kids but those demands can be insane! Parents need to understand that just because they’re in their 30s, 40s, or 50s, they are also not done growing - and they don’t know everything. Now that I’m a father of a two-year-old, that lack of understanding is the biggest thing I’ve witnessed how other parents parent. 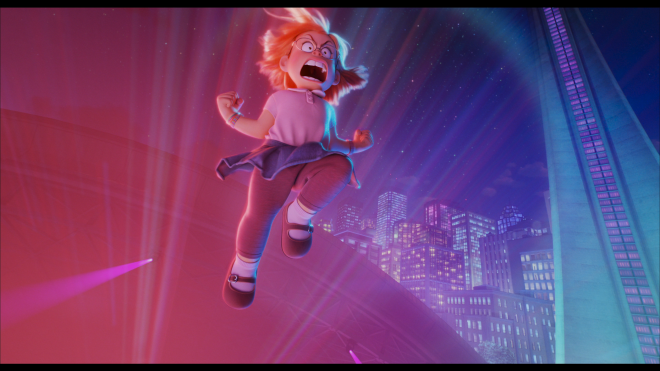 While I would love for my kid to enjoy Halloween, Friday the 13th, and the beauty of Argento’s early works, I need to always be ready to accept and understand that sometimes he just wants to watch Bluey. I can watch over him and guide him and make sure he’s okay - but my role as a guide will diminish as the years go by. I need to chill out and realize that it’s okay if he doesn’t want to watch and appreciate Zulawski’s Possession. He’ll be five someday and then he might be ready, or he may never be and that’s okay too. His life is his journey and just because it might follow a different path, it doesn’t mean it’s wrong. Until he says the PG-13 remake of RoboCop is superior to Verhoeven’s incredible and iconic original RoboCop. That’s when we might need to investigate some sort of cinematic reeducation camp.

Vital Disc Stats: The 4K Ultra HD Blu-ray
Turning Red arrives on 4K Ultra HD Blu-ray thanks to Disney in a three-disc 4K UHD + Blu-ray + Digital set. The discs are housed in a two-bay multi-disc hard case, the 4K UHD disc was stacked on top of the bonus features disc with the 1080p Blu-ray version getting its own bay on the left side of the case. The disc loads to Disney's standard menu structure that lets you watch previews or jump right to the main feature. 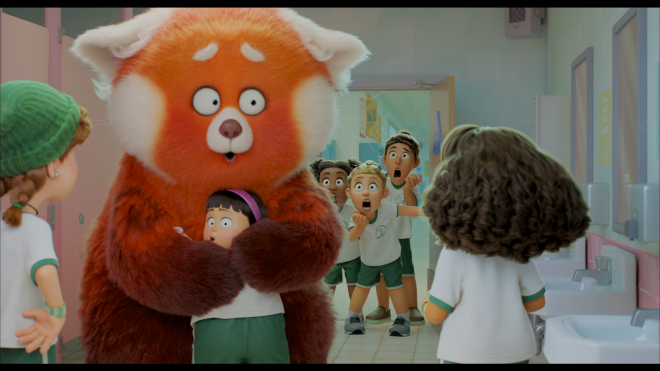 Turning Red finally comes to 4K Ultra HD Blu-ray after enduring a prolonged stay exclusively to Disney+. Seriously, Disney needs to cut the crap with sticking Pixar movies only on Disney+ - this should have had a major theatrical release. This is an often gorgeous and colorful film and I’m glad to have it on disc. While we miss out on the Dolby Vision HDR pass of streaming, I’ve had some pretty bad luck with Disney+ presentations with a lot of blocking and stuttering when I have a pretty damn good high-speed connection.

Animation lines are clean and clear - maybe not a revolution over the included 1080p disc but appreciable enough. The image picks up a stronger sense of depth and dimension and for a number of sequences, I dearly wish I could have seen this in theaters in 3D. The textures of the panda furs, the scale of the school building, and the big 4Town finale concert climax is great stuff. HDR10 is well applied highlighting bold colors and beautifully enhancing the plentiful primaries while also enriching blacks and whites. Shadows and dark areas are terrific with some well-animated and impressive shadow/light gradience. The image also picks up a nice range of specular highlights. All around this is a gorgeous presentation. 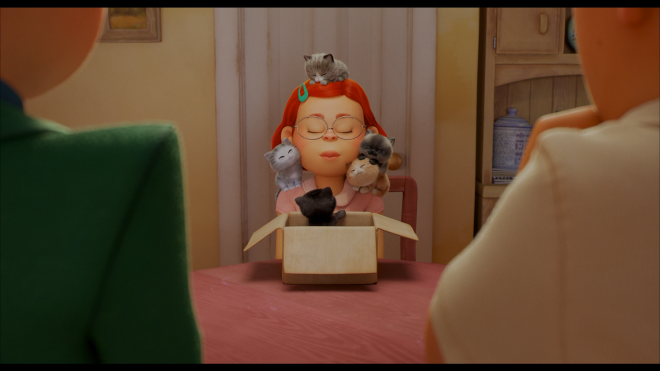 Now, the 1080p Blu-ray is perfectly good too. If you’re not rocking out to 4K at home, you’re still getting a pretty terrific disc there too. I watched this edition on a pretty cheap consumer-grade setup and it proved to be damned impressive pushing that set to the limits. While I will favor the 4K disc with HDR for all of the enhancements it offers, this transfer has its own strengths with clean clear details, bold colors with natural primaries, and lovely black levels of its own. If you’re going to add Turning Red to your home disc collection, you really can’t go wrong with either disc. 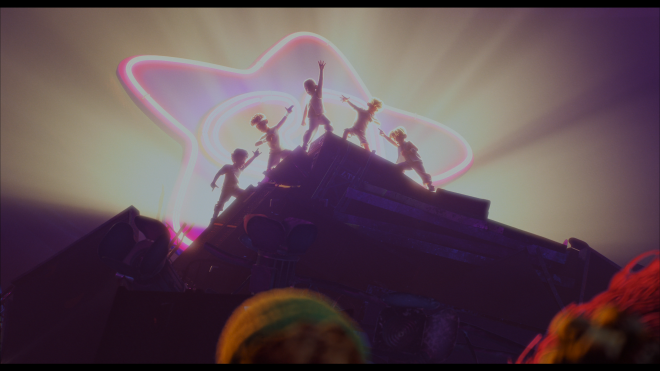 I wish I could be more glowing in the audio department for Turning Red. What’s really frustrating for this Atmos track on 4K and the DTS-HD MA 7.1 track for the Blu-ray is how you can feel what this film should sound like. When Mei bursts into Panda, you know there should be an almost concussive blast of LFE and bass - but there isn’t. When the girls get excited about their favorite band or the boy at the convenience store and they can’t hold back and they burst with joy, the enveloping immersive ring of surround sound should immerse you in the rising tension and release. But it doesn’t. And it’s not like the Atmos track on Disney+ is any better. This is just another mystifyingly minimal effort from the house of mouse. The best I can say is it's adequate. With the right amount of level adjustment (at least 10+ from my normal setting), the dialog is clean, scoring comes together, and there’s enough surround and overhead activity to create an engaging soundscape. But damn, I just wish we didn’t keep going through this for such great films.

Now a quick referral back to that DTS-HD MA 7.1 track for those 1080p Blu-ray readers, this track like so many recent Disney releases is pretty similar to its Atmos cousin in that they can suffer from similar issues and still come out on the lower end of the stick. The biggest issue here is volume. I didn’t love boosting the Atmos track, but here I really had to punch the needle. And while the Atmos mix may not exude LFE, this 7.1 track is positively anemic in that arena. 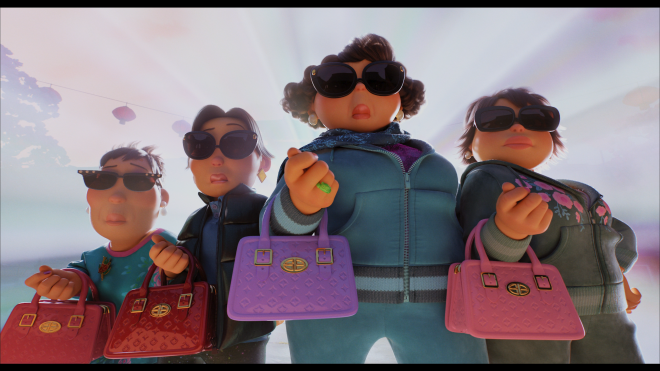 None of the bonus features are found on the actual 4K disc itself instead saving that load for the 1080p Blu-ray and extra bonus features disc. While not the most plentiful or extensive package, I’m giving a couple extra points for being informative. The audio commentary is especially a great listen but the featurettes - even those shorter ones - offer up some fun insights into the film and how it all came together. 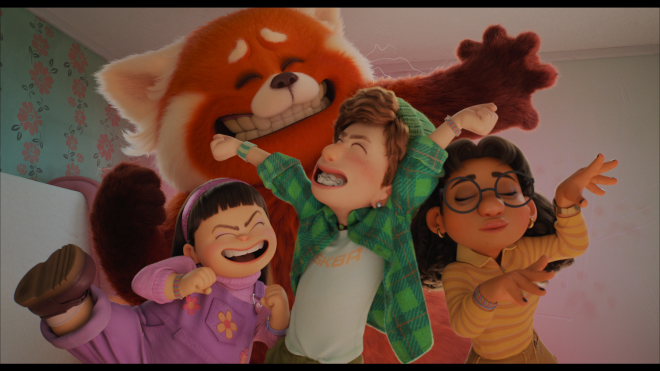 Turning Red was a delightful cinematic experience. It may not have been “THE BEST” Pixar movie ever of all time, but it’s a high mark in my book. I thought the story of a young girl coming of age dealing with an overbearing and hyper-protective parent while also confronting a particular “curse” was not only entertaining but poignant. Even as a Dad with a son, this is the kind of movie kids should see to know and understand growing up isn’t easy but neither is being a parent.

Disney finally brings Turning Red to 4K Ultra HD and Blu-ray. The HDR10 2160p transfer and likewise the SDR 1080p transfer are terrific. I favor the 4K disc but those not on the new format won’t be left in the dust either. Bonus features are pretty solid too. It’s the audio that falls short for both 4K and 1080p. The Atmos track is just limp whereas the DTS-HD MA 7.1 mix feels weightless and is just so damn quiet. If you’re in it to own Turning Red on disc, the movie is delightful and the video transfers are worth it. Recommended.