Starring Elizabeth Berridge and a hideously deformed poor soul with a murderous rage, Tobe Hooper's The Funhouse is one of the better slasher flicks to come out during the genre's 80s heyday, and it remains an amusing, stylishly creative and intelligent suspense ride forty years later. The cult horror slasher classic terrorizes the 4K Ultra HD carnival ride with a freakishly excellent Dolby Vision HDR video, a pair of highly-engaging lossless audio tracks and four new supplements joining the same set of bonuses as before. Courtesy of Scream Factory, this UHD collector's edition is a Recommended and must-own addition to the 4K horror library.

The freaks actually come out at night in Tobe Hooper's cult classic The Funhouse, and that doesn't only include the carnies working the rides or the "barkers" swindling the curious into their "joints." There's also the creepy, filthy-looking vagrant wandering the fairgrounds in a daze with what appears like blood streaming from the top of his head. Then, there's the dirty, old bag lady with a witch's cackling laugh, spouting about God watching everyone as she walks into the toilet stall to do her business. And as if that weren't enough, a "freaks-of-nature" booth has a two-headed cow and an abnormal newborn in a jar, which we later discover has an older surviving twin. This is the eerie, bizarre fun to be had in this splendid little horror flick, littered with small quirky things happening in the background while slowly building up to the main attraction creating a semblance of a real carnival show.

We carouse the other amusing attractions of the fair first, enjoying their quaintness and colorful display with childlike splendor, biding our time and saving what we hope will be the best ride until the end. And this is precisely what Amy (Elizabeth Berridge) and her date, Buzz (Cooper Huckabee) are doing, taking in the festivities and spectacle offered by this traveling funfair visiting their quiet town. They are on a double date with Amy's friends, Liz (Largo Woodruff) and her boyfriend Richie (Miles Chapin). From the director of the seminal horror classic The Texas Chain Saw Massacre and the memorable TV movie Salem's Lot, Hooper takes his wonderful, sweet time in the first half of the movie, following the four kids as they enjoy the carnival rides, which is meant as praise of the director's style, an admiration of his technique to provoke and arouse his audience's curiosity, like one of the "barkers" tempting us into peeking inside the tent. 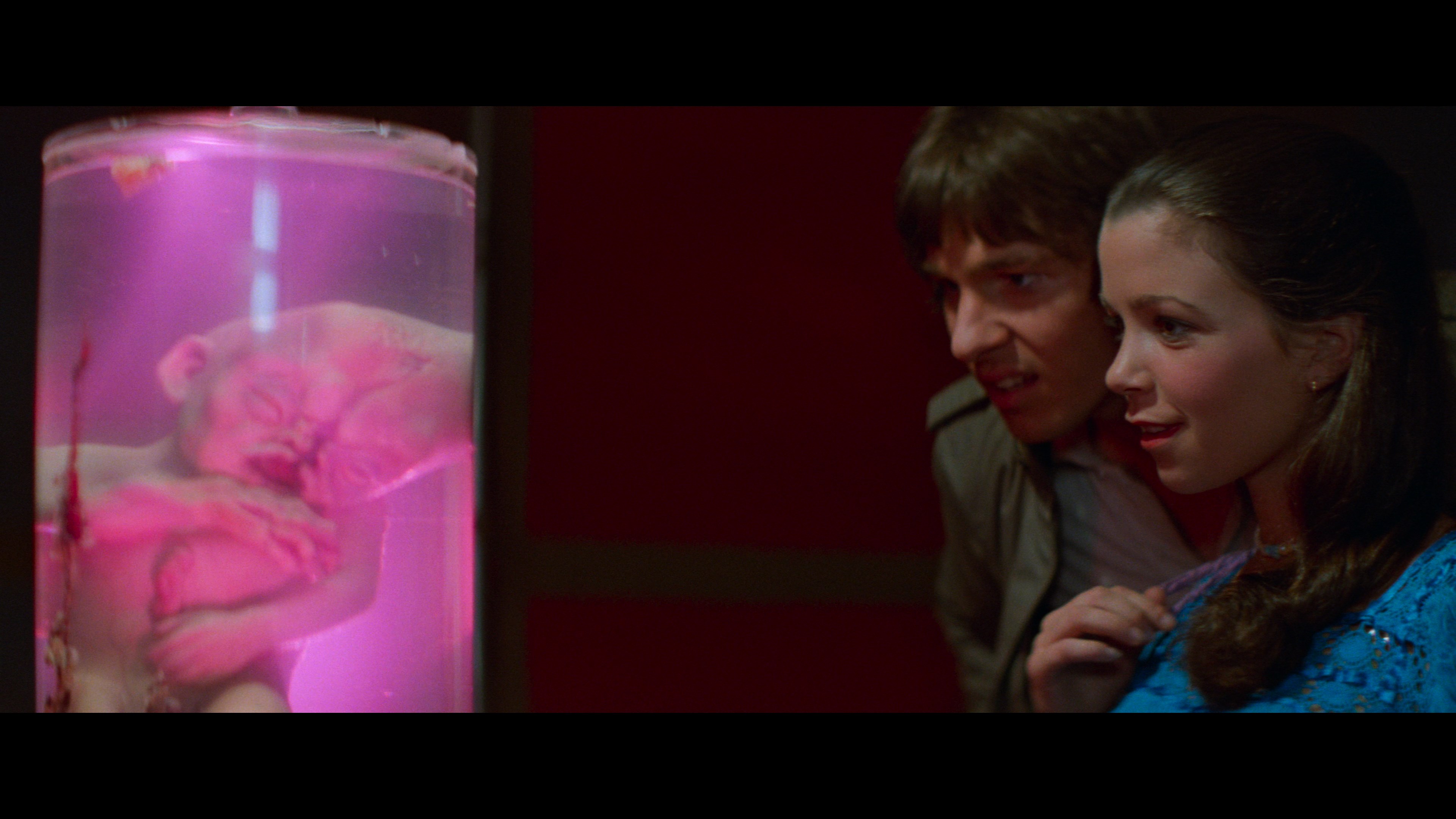 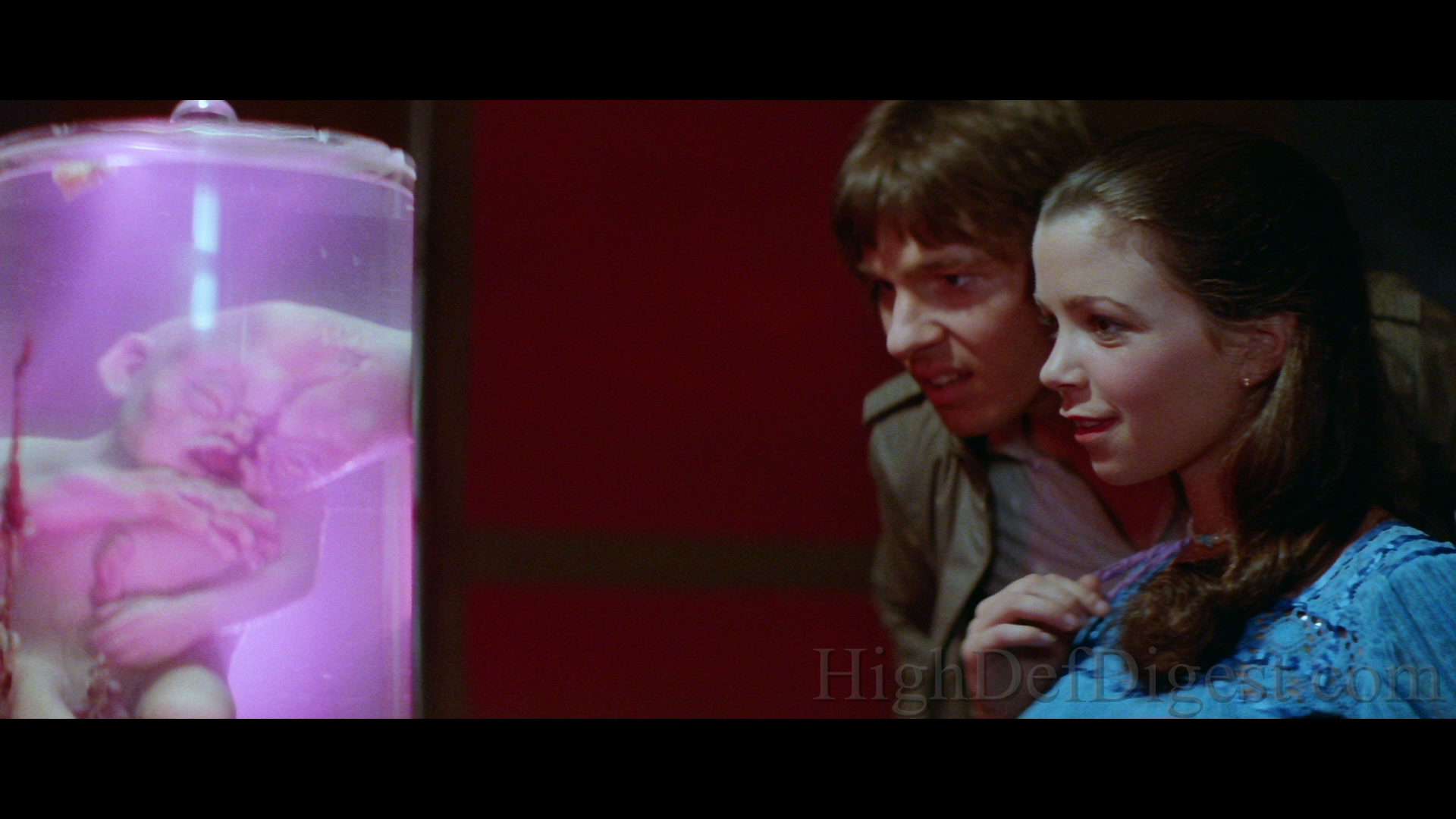 Our peek is finally satisfied when one of the teens foolishly suggests spending the night inside the funhouse ride where they witness the murder of Madame Zena (Sylvia Miles) at the hands of Gunther (Wayne Doba), a gruesomely deformed creature hiding his face beneath a Frankenstein's monster mask. What started as a fun little dare quickly spirals into a night of terror and survival, but the film is also worth appreciating for Hooper's skill behind the camera with subtle self-awareness of the techniques in creating suspense, such as the opening sequence paying homage to John Carpenter's Halloween and Alfred Hitchcock's Psycho. At the same time, Hooper appears to subconsciously strive to achieve that same level of success and inspiration with The Funhouse, which for loyal cult fans, his film is a terrific scare romp that can be enjoyed with an equal level of entertainment, making it one of the better and more originally inventive slasher flicks produced during the genre's golden heyday.

Larry Block's script faithfully adheres to the formula, down to Amy being the virginal final girl, but it never feels confined by it. Hooper does excellently in having fun with the rules, using them as devices for making a memorable film rather than being hindered by them. As he demonstrates in The Funhouse, and which also falls in line with references to the aforementioned classics, buckets of blood and gore are not always necessary for a good horror movie. Story and style are. The film is arguably pretty tame by comparison to other slasher features released around the same period, but it's all the better for it, making this deliciously fun ride a Hooper classic in its own right. And it still holds up forty years later, remaining one of the better features to come out of the 80s slasher craze.

Vital Disc Stats: The Ultra HD Blu-ray
Scream Factory brings Tobe Hooper's The Funhouse to 4K Ultra HD as a two-disc Collector's Edition combo pack. The Region Free, UHD66 disc sits comfortably opposite a Region A locked, BD50 disc on the opposing panel, and both discs are housed inside the standard black keepcase with a cardboard slipcover. At startup, the disc goes straight to a silent static screen with the usual selection along the bottom. 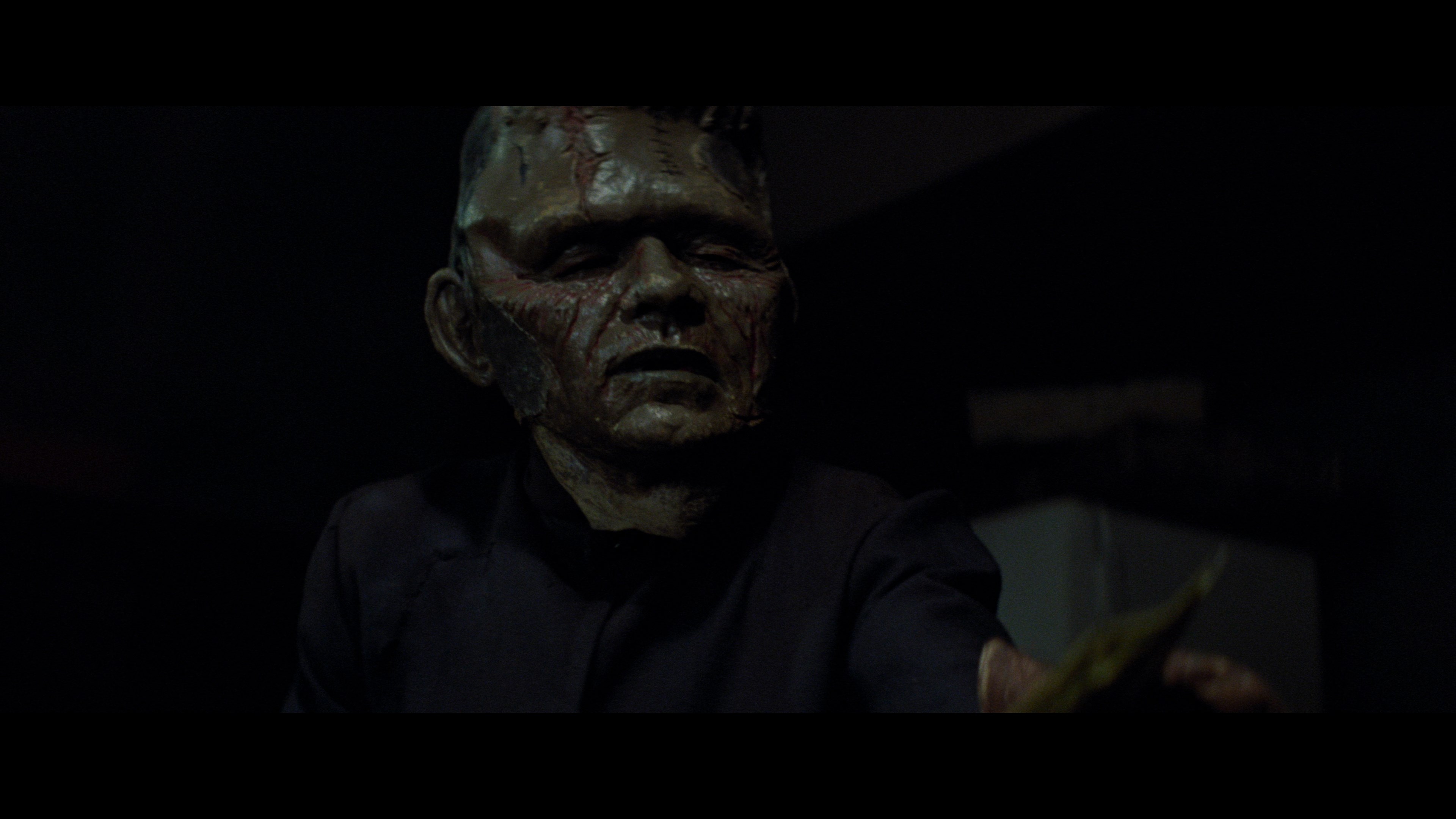 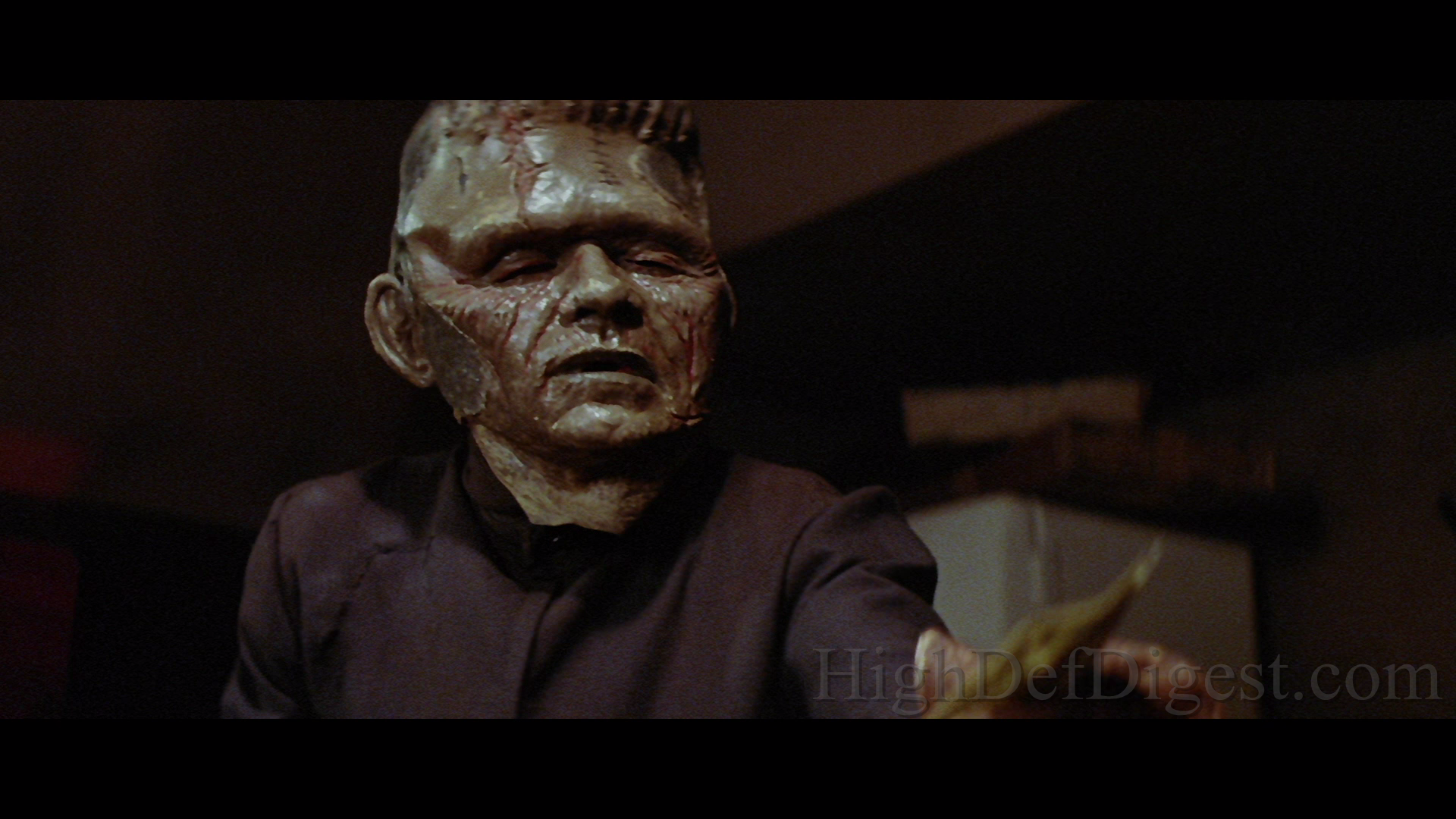 The cult slasher classic terrorizes the 4K Ultra HD carnival ride with a freakishly excellent HEVC H.265 encode, which was struck from a fresh remaster of the original 35mm camera negatives. Although not a massive night and day difference in terms of clarity and definition, the native 4K transfer nonetheless delivers a welcomed uptick over its HD predecessor. Andrew Laszlo's shallow focus photography has always been on the softer side, and the video here remains faithful to the filmmakers' stylized intentions. Nevertheless, the details in the texture of clothing and the canvas material of the tents are sharper and cleaner than in previous home releases where we can better make out the finer aspects of the overall production design and inside the funhouse ride. Facial complexions also appear healthier and more revealing with better, more accurate rosy-peach tones in the entire cast.

The bigger and more noteworthy takeaway in this Dolby Vision HDR presentation is the immensely richer and more sumptuous array of primaries, particularly the animated reds and the energetic variety of blues. Meanwhile, secondary hues bathe the horror in a more flamboyant, striking kaleidoscope of full-bodied yellows, cotton candy pinks, tiger oranges, dramatic lavenders and vibrant sepia tans, all of which perfectly complements the movie's carnival of terror theme. Likewise, the improvement in contrast and brightness balance shower the action in inky, stygian blacks and dynamic, sparkling whites. Shadow delineation can be a bit wanting with a few occasions of the finer details being completely engulfed, but overall, visibility within the darkest corners is quite strong and passable. Specular highlights add a dramatic, realistic sparkle along metallic surfaces and a tight, narrow glow around light sources to reveal more within the hottest spots.

In the end, the horror favorite has never looked better than it does in 4K HDR and is ultimately a fantastic upgrade from the previous Blu-ray release. (Dolby Vision HDR Video Rating: 84/100) 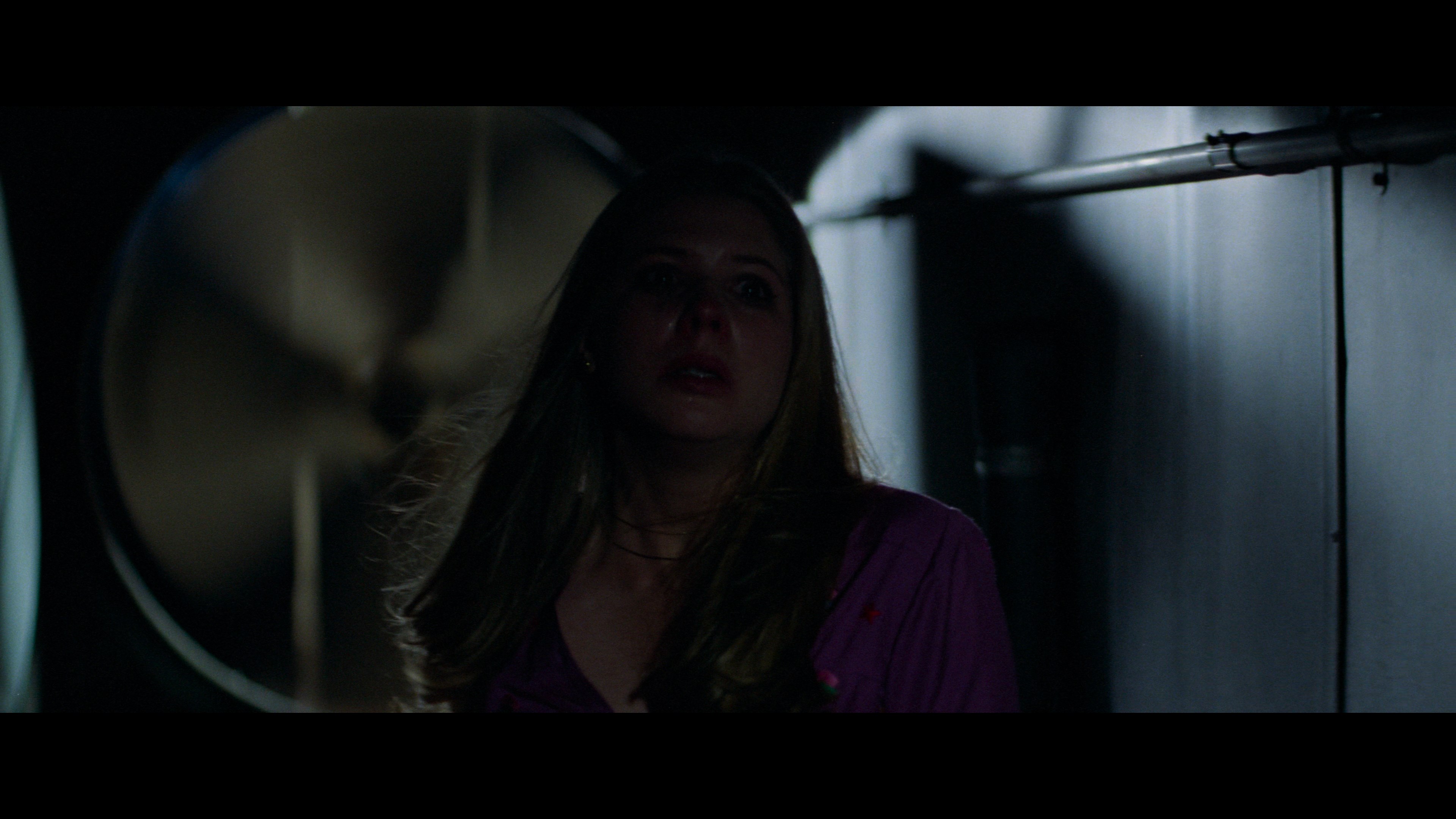 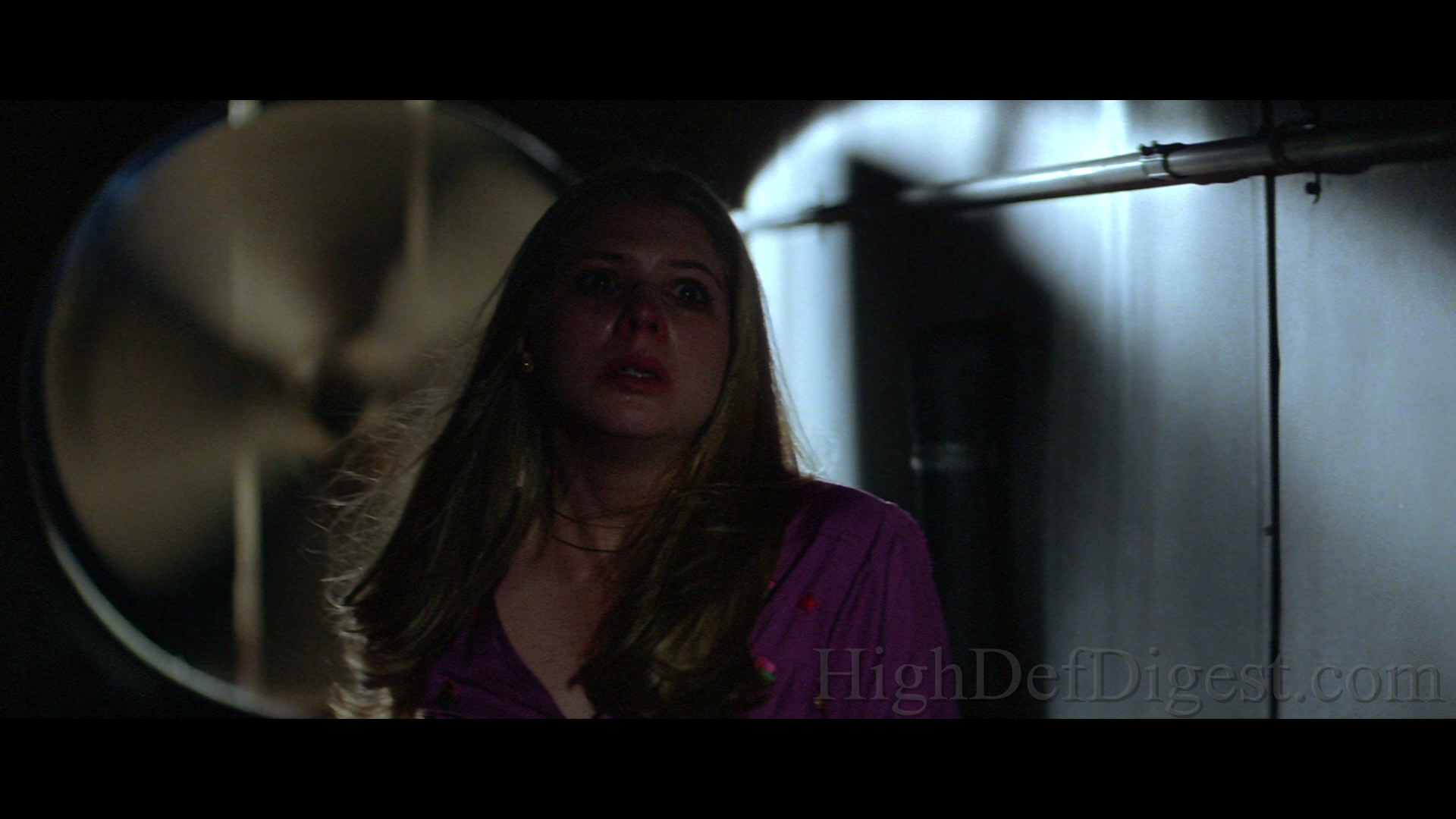 For all intents and purposes, it would appear as though Scream Factory offers the same pair of listening options as its Blu-ray predecessor: a DTS-HD Master Audio 2.0 stereo soundtrack and a 5.1 surround remix. However, back-and-forth comparisons seem to suggest the latter has been revisited and perhaps altered because it surprisingly sounds better than before with less emphasis on the surrounds and is more accurately a front-heavy presentation. Still, given the choice, the former is arguably the superior of the two, as it is more faithful to the original sound design, but the 5.1 version is an unexpectedly fun listen that works exceedingly well with the receivers' Auro-3D up-mixing functionality. In the end, fans can't go wrong with either track.

Both lossless mixes deliver a great sense of presence and fidelity with a broad, highly-engaging soundstage, layered with a variety of background activity. However, the 5.1 remix extends a few of those ambient effects, like the chatter of patrons and the expected commotion of a busy carnival, with better discrete clarity and more convincingly spreads them across the fronts and lightly into the top heights, keeping the movie more lively and energetic from beginning to end. The mid-range remains fairly dynamic with excellent range and differentiation in the musical score of John Beal, which also lightly bleeds into the sides and top heights without feeling forced or artificial. Meanwhile, dialogue remains clear and distinct above the louder action segments. The low-end is adequate and appropriate, providing appreciable depth to the music and action.

All in all, either lossless mix is a great choice, but the 5.1 remix is a surprising improvement over the previous iteration. (Audio Rating: 82/100) 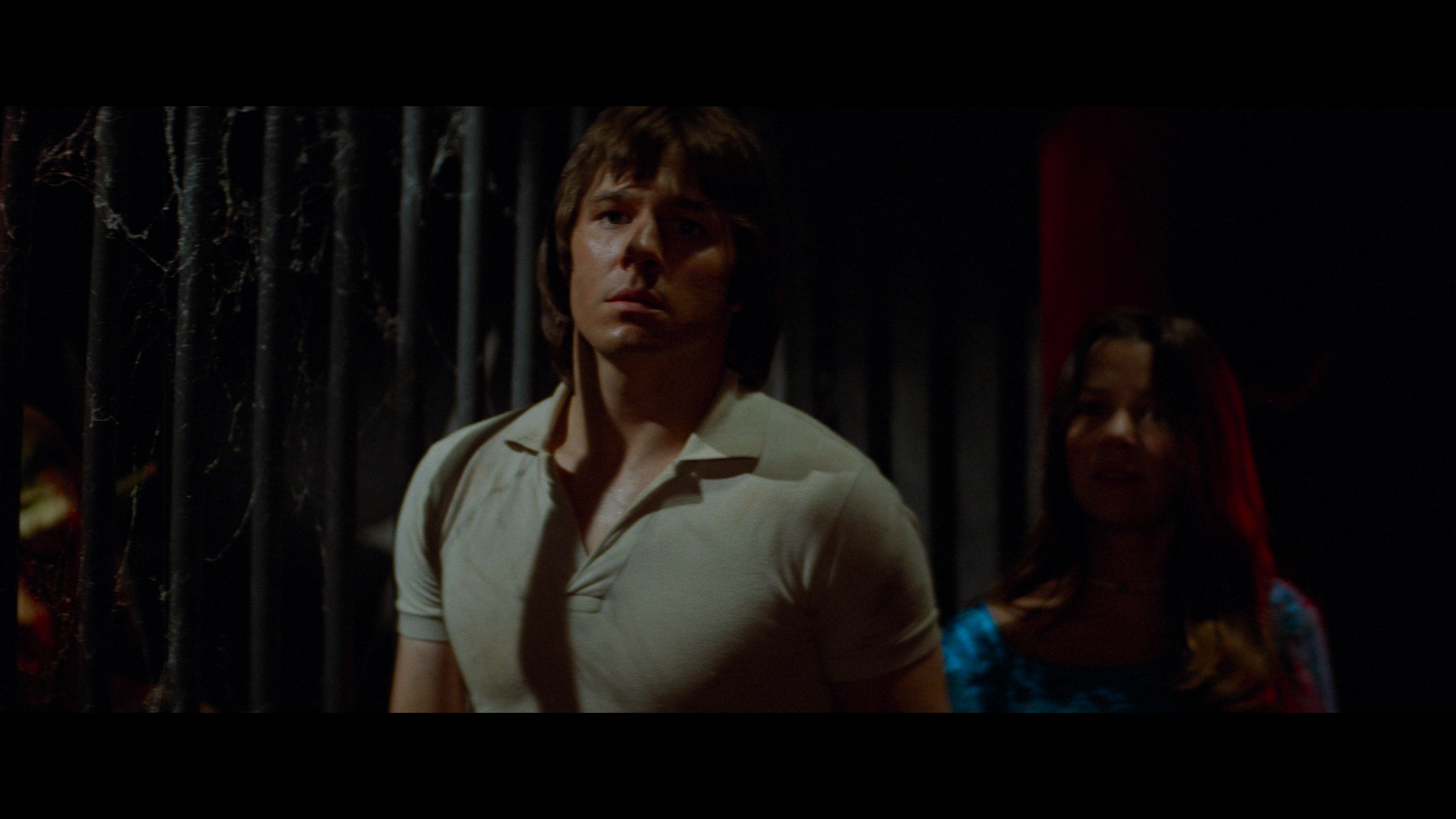 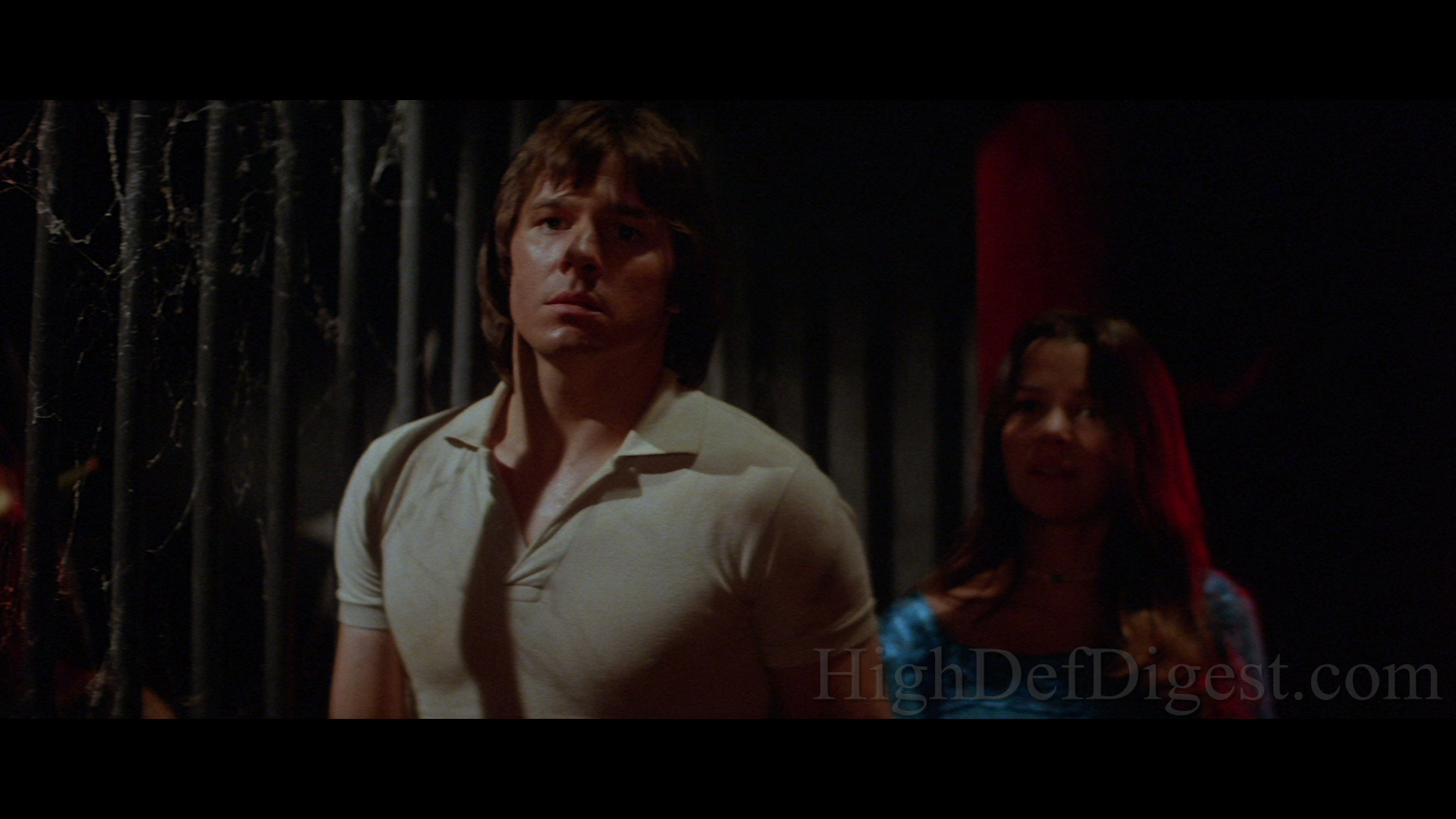 For this UHD edition, Scream Factory ports over the same bonus features from the previous home video release and ups the ante with four new supplements that are exclusive to this package. Other than the commentary track, all the supplements are housed in the accompanying Blu-ray disc. 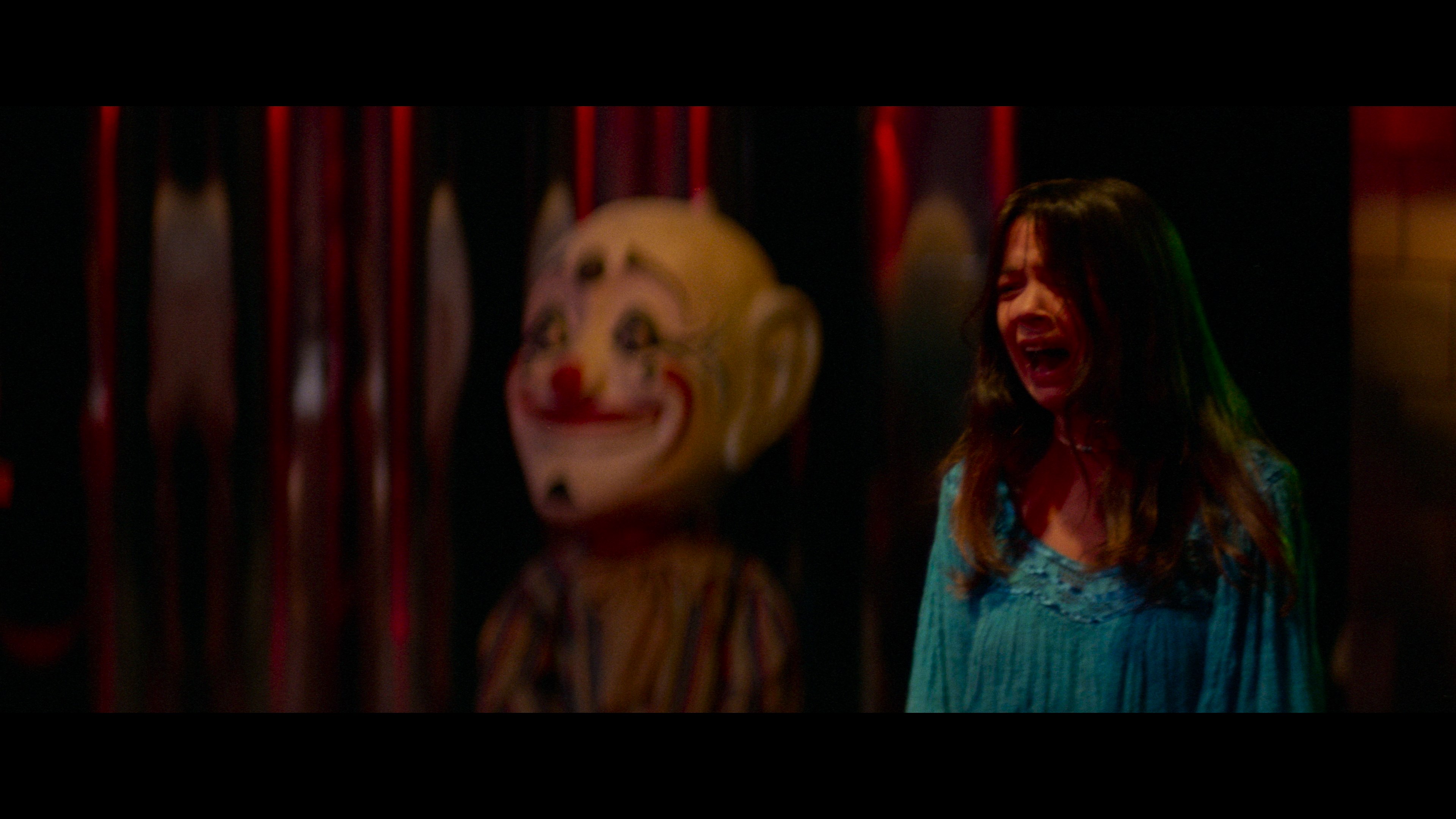 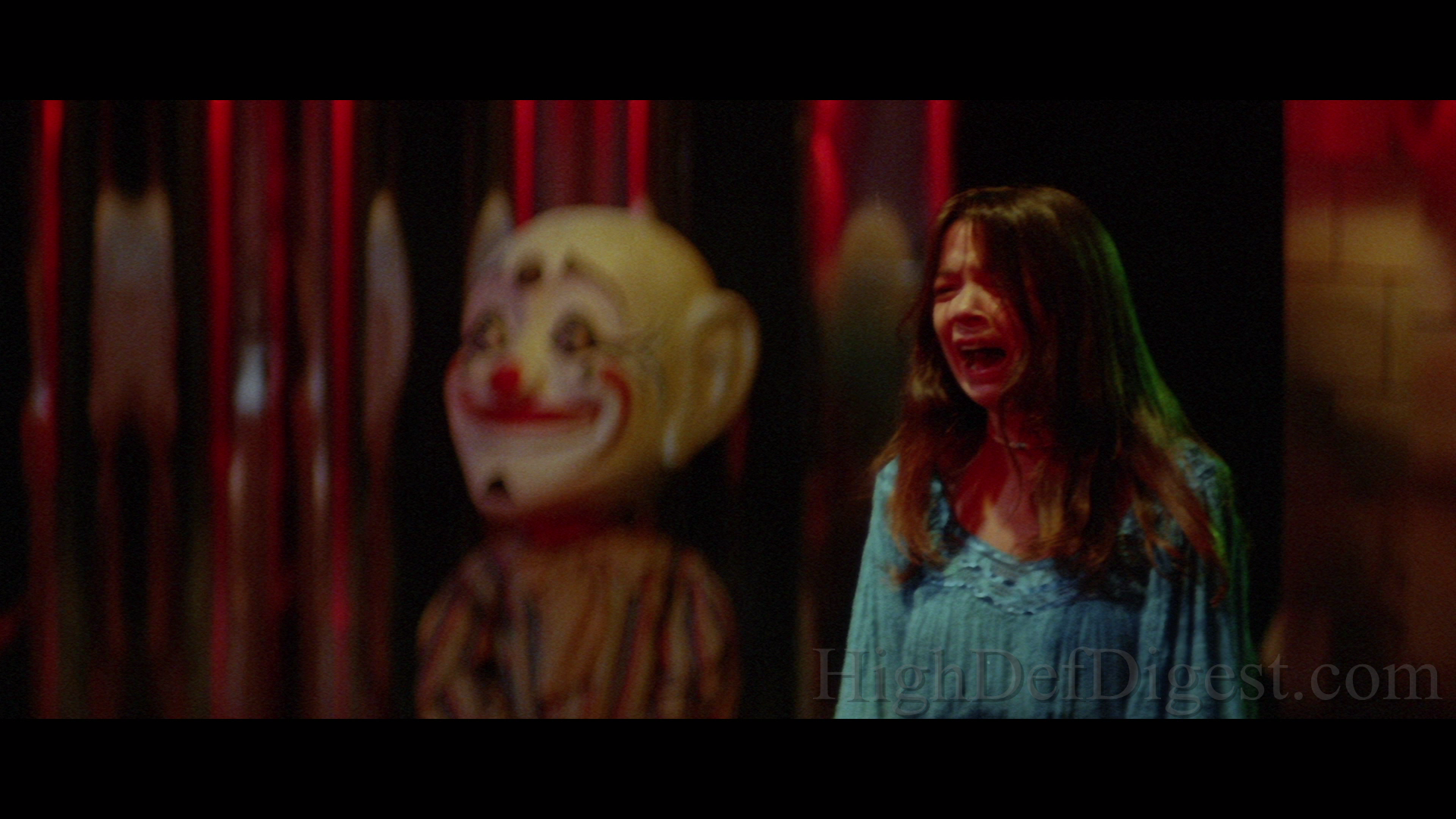 One of the better horror films to come out during the heyday of the 80s slasher, Tobe Hooper's The Funhouse is an amusing and stylishly creative suspense ride with a fond love of classic horror. Starring Elizabeth Berridge and a hideously deformed poor soul with a murderous rage, the movie is a cult slasher classic with plenty of smarts and intelligence in its style and approach to the genre. The horror favorite terrorizes the 4K Ultra HD carnival ride with a freakishly excellent Dolby Vision HDR presentation that offers a fantastic upgrade over its Blu-ray predecessor, joined by two equally excellent and enjoyable DTS-HD MA audio options from which to choose. While porting over the same bonuses as before, Scream Factory has culled together four more new supplements that are exclusive to this package, making this UHD collector's edition a recommended and must-own addition to the 4K horror library.