Genuinely moody and atmospheric, stylish cult fantasy thriller Cat People is Paul Schrader's reimaging of Val Lewton's 1942 classic where he makes a sincere attempt at exploring our base animal sexual urges but is ultimately somewhat over the top and silly. Courtesy of Scream Factory, the 80s cult fantasy horror favorite purrs its way to Ultra HD with a lovely and largely satisfying 4K HDR video but a rather disappointing pair of DTS-HD Master Audio tracks. Nevertheless, the overall UHD package comes home with a nice selection of bonus features and is Worth a Look for the curious but makes recommended upgrade for the devoted cult fan.

Cat People is one of that completely ludicrous but strangely compelling cinematic car crashes that could only have been made in the '80s. Not so much a remake as a "re-imagining" of the 1942 Val Lewton classic of the same name, writer-director Paul Schrader takes a dated piece of drive-in pulp and elevates it to the plane of faux-high art. He panders to '80s decadent sensibilities with heaping helpings of gratuitous gore and lots of leering shots of Natassia Kinski. Set in New Orleans, the plot about Kinski's Irena reuniting with her creepy, long-lost brother Paul (Malcolm McDowell) is hilariously absurd, what with his long-winded speeches about "repressed animal instincts" and an ancient curse that causes their bloodline to turn into leopards after mating. Yet, Schrader breathes enough thematic complexity that the B-movie production retains a fascinating, hypnotic power that ultimately elevates it above Schrader's self-defeating pretensions.

As a creature feature, the movie doesn't really work, and even with a healthy suspension of disbelief, the transition between human and cat hardly makes sense nor is it rendered with particularly believable make-up effects. Some of the sillier elements are best left to the imagination, but Schrader undercuts his own mythology because he doesn't have the suggestive touch that Jacques Tourneur displayed in his 1942 original. In fact, the movie seems to carry an inherently misogynistic subtext with Schrader repeating the visual conceit of voyeuristically placing of the oft-naked, nipple-baring Kinski on a cinematic pedestal, framing her as an object to be leered at. In the film’s disturbing conclusion, Irena is eventually locked in a cage by her figurative "owner," local zoo curator Oliver (John Heard). The whole scene is the ultimate in female objectification by way of the dominant male gaze. 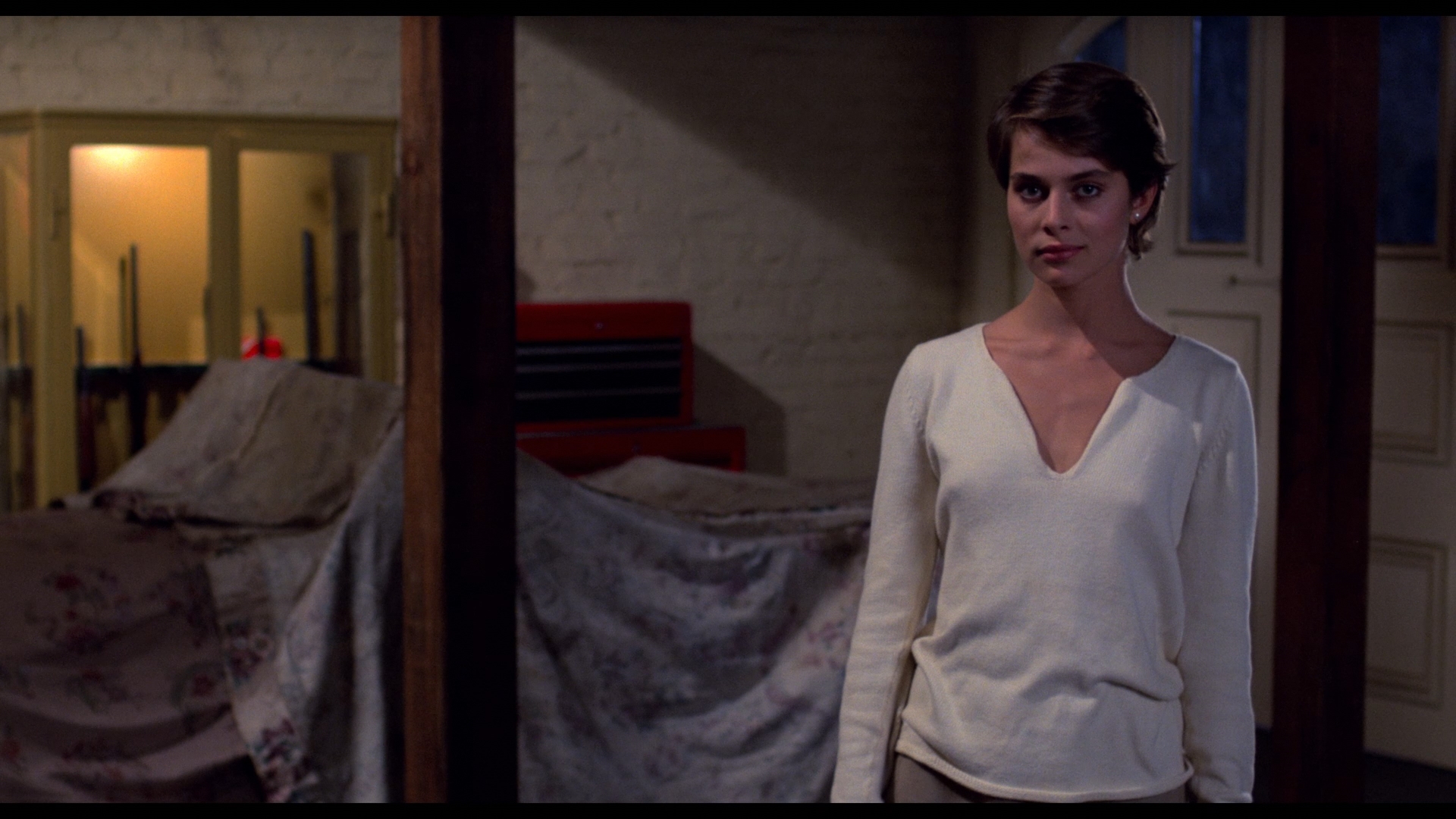 Critical musings aside, Cat People is certainly a stylish and well-produced film. The New Orleans locations drip with atmosphere, and Schrader was smart to employ Giorgio Moroder, whose typically '80s synthesizer-heavy score remains one of the best soundtracks of any horror film of the era. Add to that some impressive production design, elegant cinematography, and the sensual Kinski, and Cat People surprisingly holds up as an imperfect but intriguing little cult gem.

Vital Disc Stats: The Ultra HD Blu-ray
Scream Factory brings Paul Schrader's Cat People to 4K Ultra HD as a two-disc Collector's Edition combo pack. The Region Free, UHD66 disc sits comfortably opposite a Region A locked, BD50 disc on the opposing panel, and both discs are housed inside the standard black keepcase with a cardboard slipcover. At startup, the disc goes straight to a silent static screen with the usual selection along the bottom. 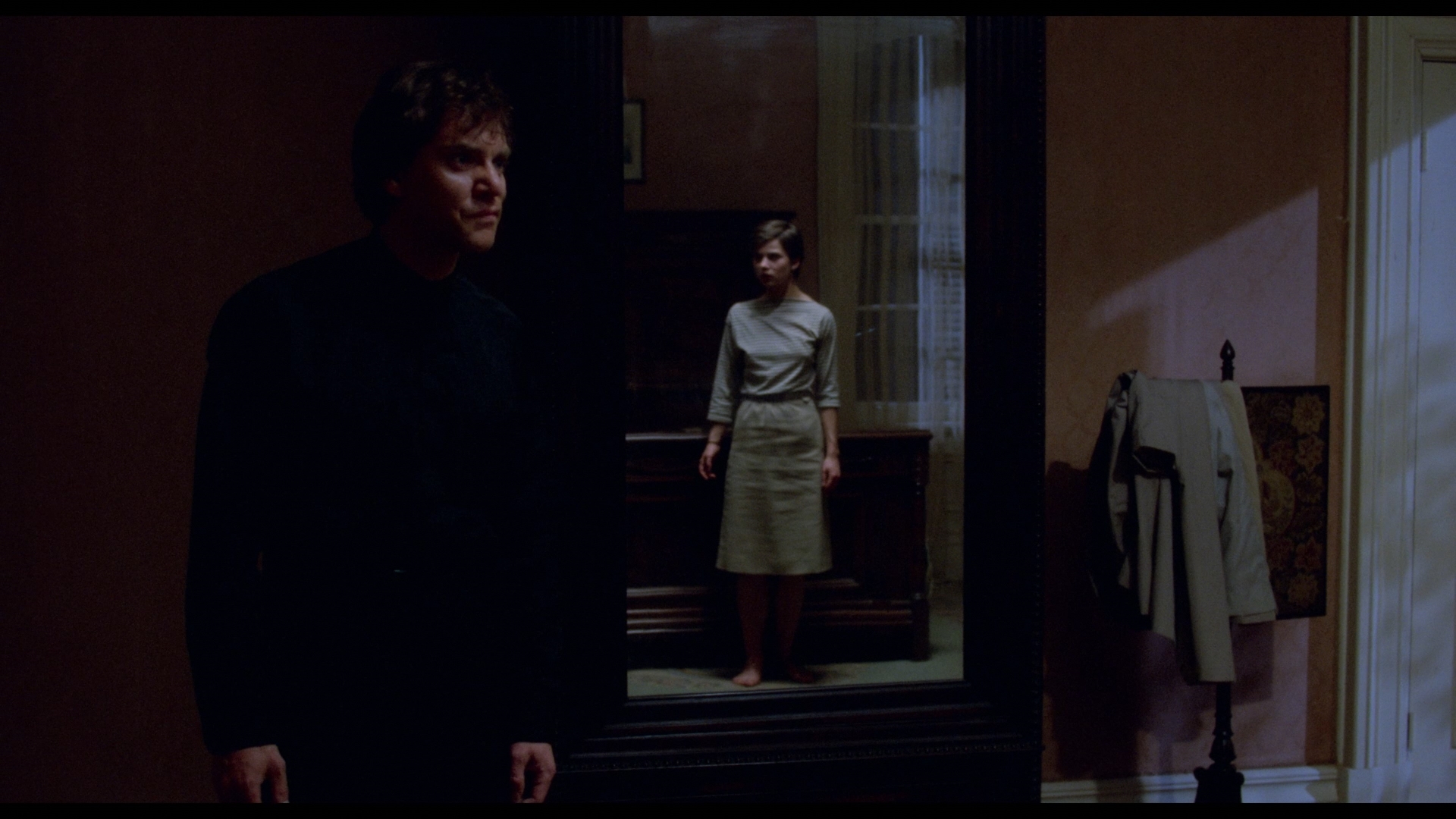 The cult fantasy horror favorite purrs its way to 4K Ultra HD with a lovely and highly detailed HEVC H.265 encode that delivers a marked and very satisfying improvement over its previous HD predecessors.

Coming from a new remaster of the original 35mm camera negatives, the native 4K transfer starts off a bit questionable in the opening scenes with the primitive humans but suddenly shifts for the better once we move into modern-day New Orleans. In fact, several nighttime and poorly-lit sequences tend to be the weaker parts, particularly during the transformation scenes, looking noticeably softer with a more prominent grain structure. This isn't a consistent issue since many other nighttime scenes look beautiful oozing with inky rich black levels, but this does appear to be inherent to the source due to the stylized cinematography and the film stock used at the time. Shadow delineation, likewise, can occasionally seem a tad disappointing with the darkest corners and moments engulfing the finer aspects, but overall, it's strong and acceptable given the filmmakers' intended aesthetics. 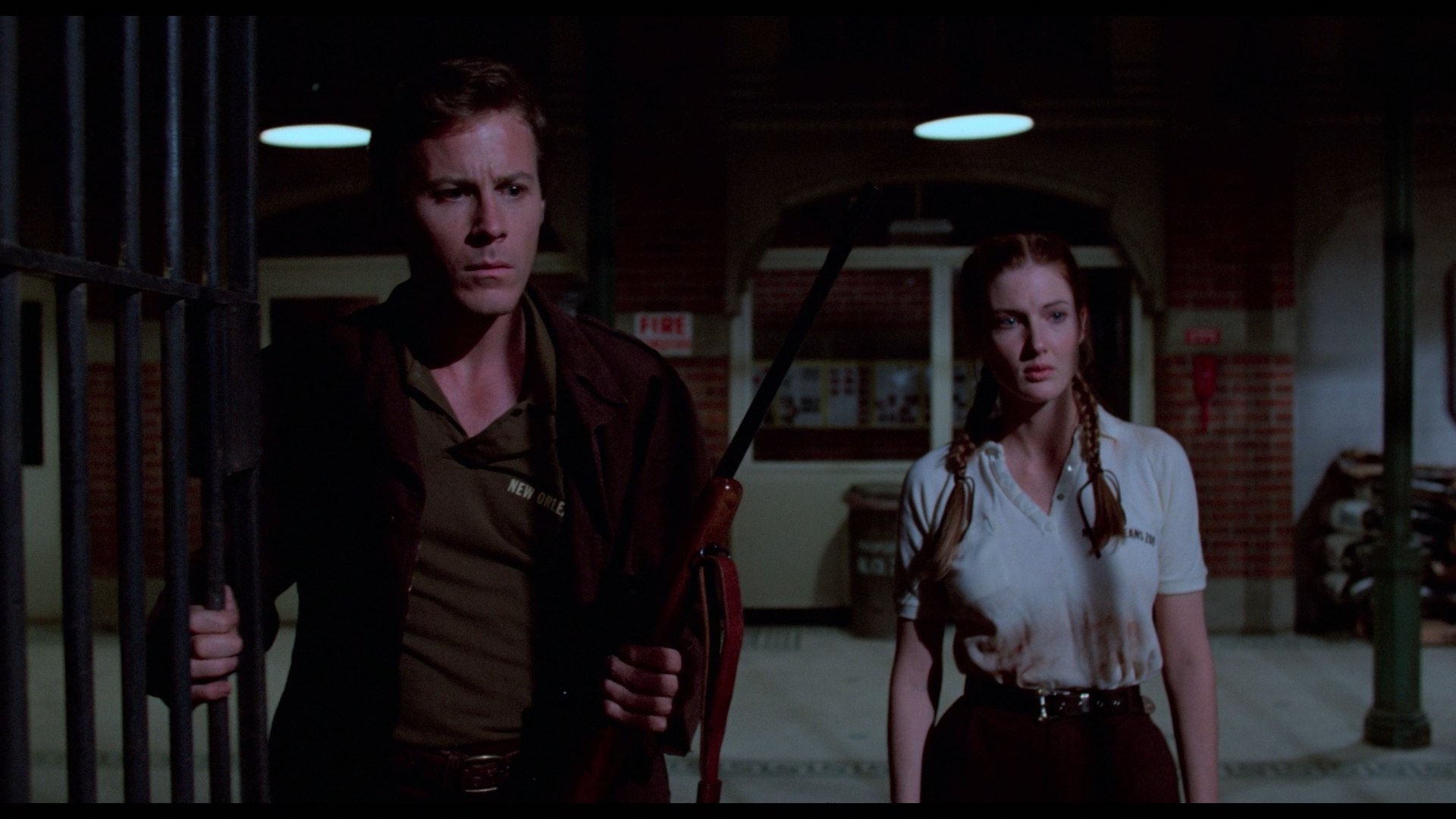 Daylight sequences, on the other hand, come with sharp, striking details in the surrounding foliage and the unique architectural design of the buildings, thanks to a spot-on contrast balance that supplies brilliant, vivid whites throughout. Specular highlights are also notable, furnishing a realistic sheen on metallic surfaces, a tighter, revealing glow around various light sources and a crisp sparkle on watery surfaces. The Dolby Vision HDR presentation delivers a significantly richer, more sumptuous array of colors, especially a more dramatic and animated selection of reds while secondary hues look more full-bodied and flamboyant. Facial complexions appear natural and accurate with lifelike textures and healthy peachy-rose tones in the cast.

It's worth noting, as well, that the presentation occasionally comes with a few strange anomalies, like sudden bursts of discoloration during certain edit transitions and cuts. Even weirder is at around the 57:33 mark when Irena and Oliver boat to his secluded lake house, and in the background, what looks like odd moiré fringes can be seen along the telephone lines. The rest of the sequence also comes with minor instances of vertical scratches and light specks of dirt. Outside of that, and all things considered, the cult remake has never looked better as it does on UHD, awash with a thin, natural layer of grain that provides the 1.85:1 image with an attractive film-like appeal. (Dolby Vision HDR Video Rating: 80/100) 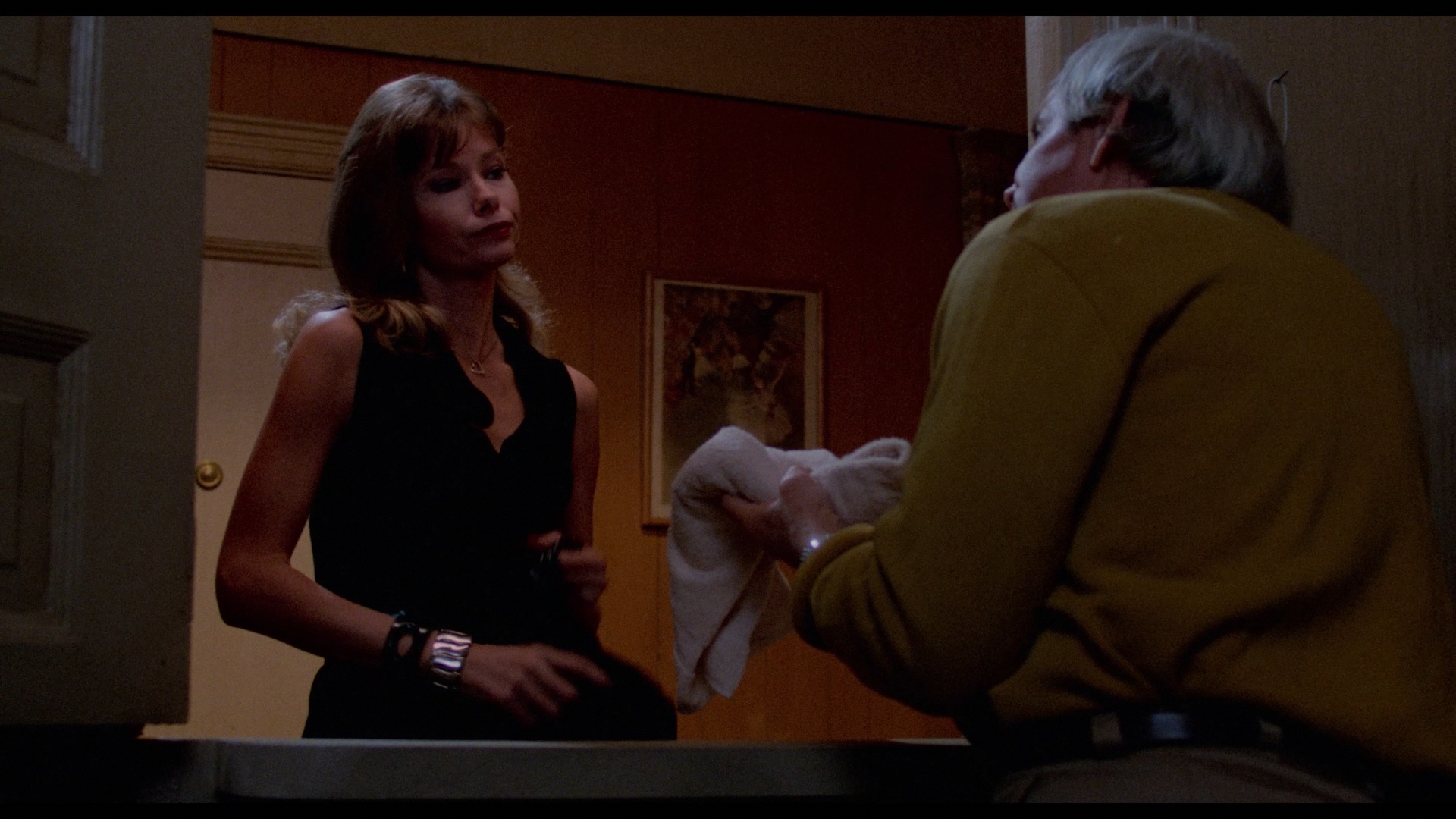 Unlike the video, it is not clear if the new 4K scan of the OCN included a remaster of the original audio elements, but whatever the case may be, it would appear Scream Factory offers fans the same choice between a DTS-HD Master Audio 2.0 stereo track and a 5.1 remix enjoyed on the previous Blu-ray release. However, back and forth comparisons make question whether or not the audio was revisited and altered in some way because the two choices are not exactly identical to their predecessors.

Surprisingly, the latter seems to be the weaker of the two since it comes at significantly lower decibels than the stereo option, so much so that I had to raise the master volume. And even then, the mid-range feels tightly constrained and uniform with little appreciable distinction in the score or the loudest, ear-piercing moments, and the low-end is an exaggerated, hollow mess. Dialogue is also heard at a much lower volume than the rest of the action, often drowned out by the score in many areas or by the action. There's not much going on in the surrounds, which is fine and arguably preferred, but overall, the remix is disappointing.

The lossless stereo mix is ultimately the stronger and preferred listening option, delivering the front-heavy design with better acoustical definition and balance in Giorgio Moroder's synth score while several off-screen effects are amusingly convincing and flawlessly pan across the three front channels. Low bass is appropriate and deep, providing the song selections and music with some depth, and vocals are very well-prioritized in the center and above the loudest segments. There may not be much going on in terms of dynamics, but the mid-range provides cleaner details and distinction than its 5.1 counterpart. The stereo track also lends itself well to the receivers' Auro-3D up-mixing functionality, effortlessly spreading a few atmospherics and the music into the front heights, generating a more engaging half-dome soundstage. (Audio Rating: 72/100) 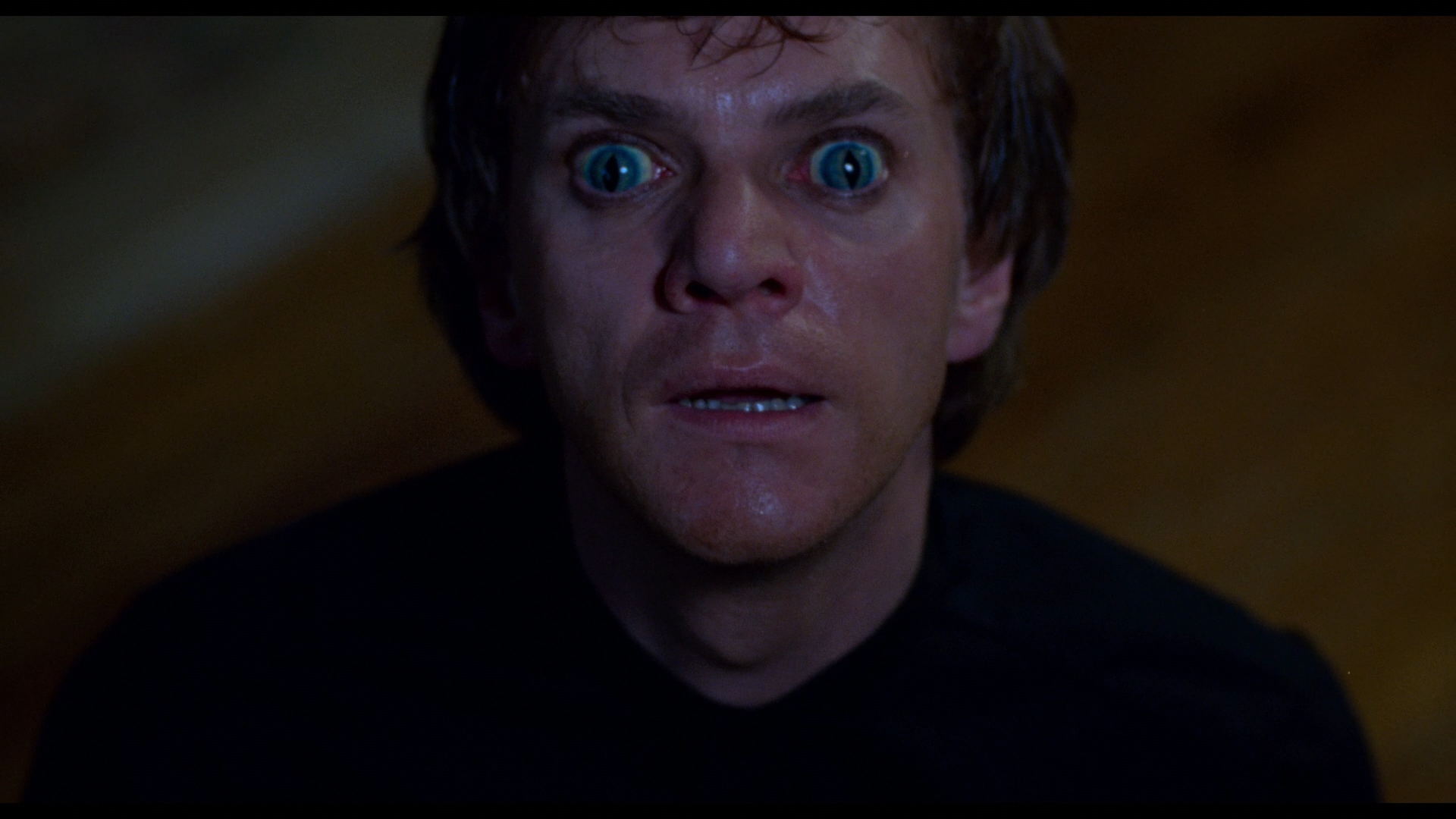 For this UHD edition, Scream Factory has culled together various bonus features from other home video releases, including the now-defunct HD DVD package. And other than the commentary track, all the supplements are housed in the accompanying Blu-ray disc. 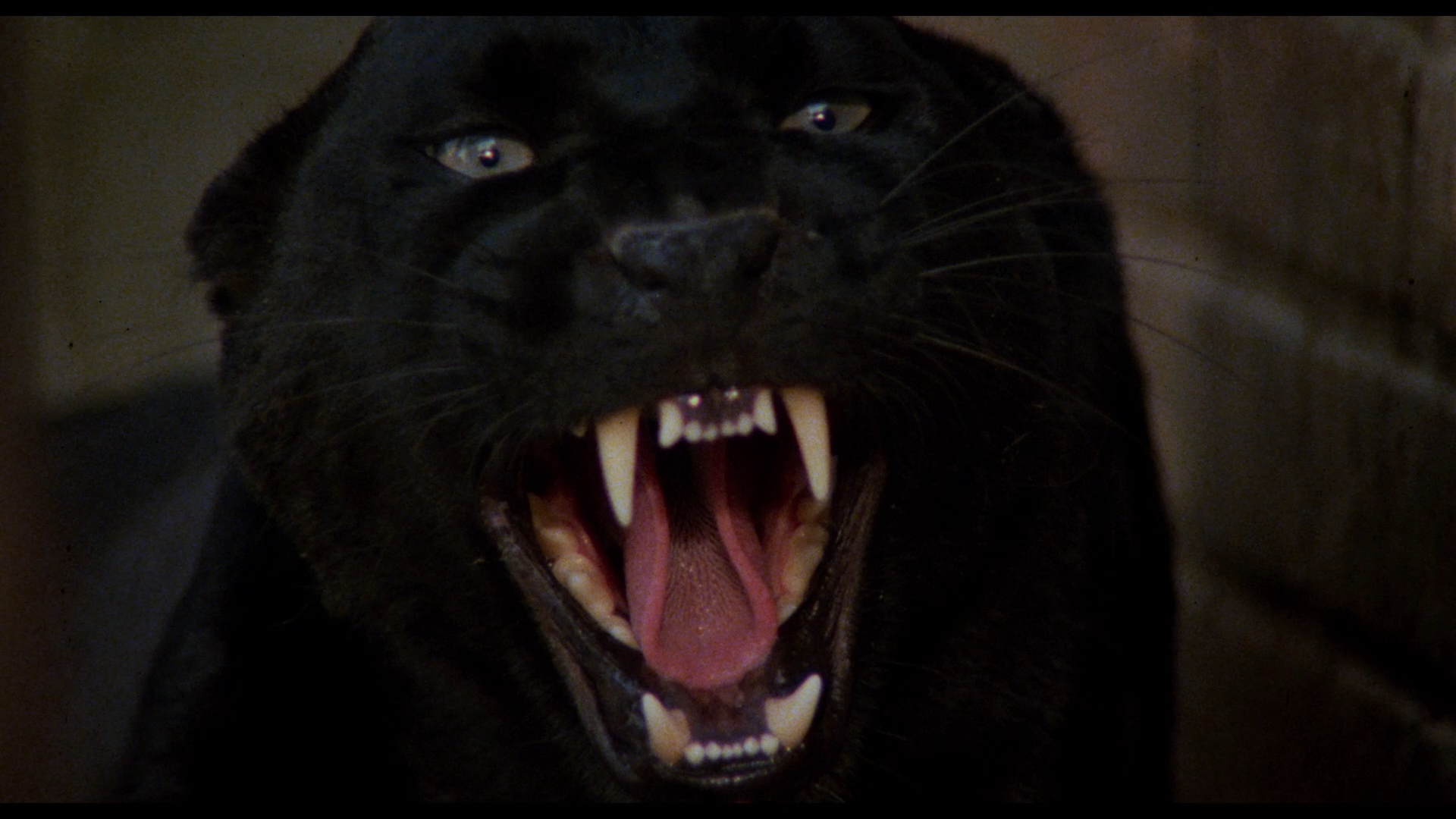 None too subtle but genuinely moody and atmospheric, Cat People is a stylish cult fantasy thriller making an attempt at exploring our base animal instincts, which apparently have a great deal to do with sexual urges. But ultimately, Paul Schrader's reimaging of Val Lewton's 1942 classic is somewhat over the top and silly, yet the camera is head over heels in love with star Nastassja Kinski, arguably making it the film's lasting impression and reason for its continued popularity. Courtesy of Scream Factory, the 80s cult fantasy horror favorite purrs its way to 4K Ultra HD with a lovely and largely satisfying Dolby Vision HDR presentation, offering a marked improvement over its HD SDR predecessors. Sadly, the same can't be said of the two DTS-HD Master Audio options, coming home at about the same quality as before, but this is rectified by a very nice selection of bonus features that are sure to keep fans busy. All in all, the overall UHD package is worth a look for the curious but recommended upgrade for the devoted cult fan.