Walking talking fan-favorite Hitchcockian child-in-peril thriller Cloak & Dagger comes to 4K Ultra HD Blu-ray and Blu-ray from Vinegar Syndrome. Hot off his successful return of a friendly extra-terrestrial, Henry Thomas is embroiled in international espionage when he witnesses a murder and comes into possession of secret government data embedded in an Atari cartridge! While the film can often be a shameless video game advertisement, Director Richard Franklin holds the film together getting great performances from his cast including Dabney Coleman, Michael Murphy, John McIntire, and Jeanette Nolan. Now the film comes home looking and sounding better than ever and stuffed with great bonus features. Recommended

NOTE - This release of Cloak & Dagger is only available through Vinegar Syndrome. Right now they're running their regular Partner Label Only promotions so if you didn't order during the Halfway to Black Friday Sale, it'll be back up for purchase in July.

After his mother died, little Davey Osborn (Henry Thomas) retreats into a fantasy world of video games and board games complete with superspy imaginary friend Jack Flack (Dabney Coleman). His father Hal (also Dabney Coleman) desperately tries to reach him, but between his work with the Airforce and his own grief, the two are at odds. When Davey witnesses a murder and comes into possession of secret government data embedded in an Atari Cloak & Dagger game cartridge, only his best friend Kim (Christina Nigra) and their game shop proprietor pal Morris (William Forsythe) believe him. But when assassins come for Davey, the boy can always count on Jack Flack to help get him out of trouble!

I was all of two years old when Cloak & Dagger came out in 1984 and I probably haven’t seen this movie since at least 1988. Coming back to a childhood favorite you haven’t seen in over 30 years is a dicey prospect for any movie let alone a classic piece of 80s child-endangerment entertainment. Going in I was sure this movie wouldn’t hold up but this near-40-year-old had a blast. It also helped that this was one of the first live-action movies my two-year-old actually sat through and seemingly enjoyed! This isn’t to say Cloak & Dagger is a great film or one of the best to come out of that decade, it’s just a very entertaining kid-focused adventure that impressively holds up. 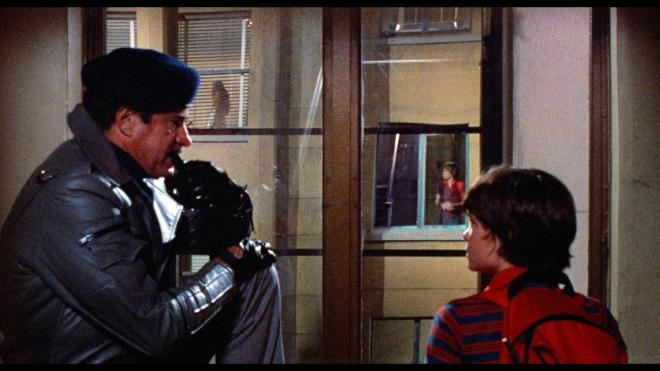 A very loose remake of the classic 1949 thriller The Widow, Director Richard Franklin and writer Tom “Not Spider-man” Holland contemporized the story with a video game twist. What we get is a classic piece of 80s child endangerment action-adventure akin to The Goonies and Adventures in Babysitting with a childhood-imaginative twist like Flight of the Navigator. It’s a fun kid-friendly adventure where there’s plenty of peril and violence but enough humor and heart to not make it a terrifying endeavor for the younger folk watching at home. To that point, I was quite amazed at how many adults are literally out to kill one little kid and the lengths they’re willing to go to ice Henry Thomas. Granted they’re amazingly inept at it, but still, a kid having to outsmart an assassin with an Uzi pointed at him is quite something even for the 80s.

If there’s anything that dates this film it’s the near-constant Atari references and people calling the game cartridges “tapes.” And to that end, this film actually dated itself before it was even released. The video game crash already had hit a year before this film’s release. The fact there’s an E.T. game advertisement on the wall of Morris’ backroom is a friendly nod to this film’s star but also a piece of infamy for how truly terrible that game was. This film is even trying to sell an Atari port of the arcade game (also called) Cloak & Dagger - only the plot isn’t the same as the movie and the game never actually made it to store shelves because the Atari 5200 was choking to death. 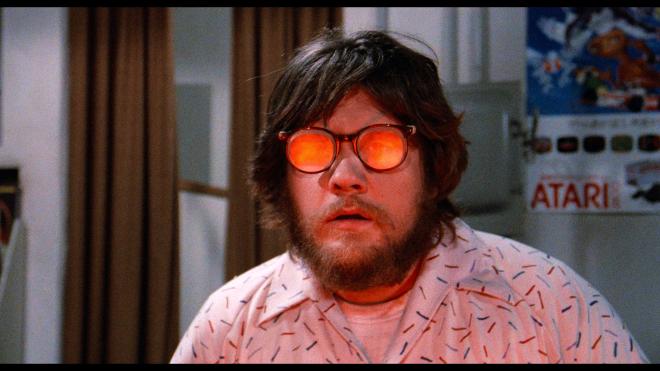 But thanks to Holland’s smart script, Franklin’s efficient direction, and a great cast Cloak & Dagger proves to be a fun little retreat into nostalgic waters. It was a kick to see legendary actors John McIntire and Jeanette Nolan pop up in their respective roles. Henry Thomas gets to be the smart kid without fully repeating his star-making turn as Elliot from E.T.: The Extra-Terrestrial. With that, the standout for me is Dabney Coleman in a dual role as the imaginary friend Jack Flack and Davey’s father Hal. This movie really makes you miss Coleman’s 80s work. Here he got to showcase his natural dead-pan comedy as Jack Flack and then deliver his heartfelt everyman father figure as Hal. I figured this latest outing would either be a nostalgic joy or a chore and thankfully it was the former. I hadn’t seen this movie in so long that the twists and turns were genuinely surprising and fun.

Cloak & Dagger makes its 4K Ultra HD and Blu-ray debut with a new limited edition 4K UHD + Blu-ray release from Vinegar Syndrome. Similar to their releases of The Beastmaster and Six-String Samurai, the two discs are housed in a standard Black 4K case with a slipcover designed to look like an old Atari game package with the base insert art looking like an Atari cartridge. Reversible insert artwork replicates the classic theatrical poster. Also included is a 40-page booklet featuring essays and interviews with behind-the-scenes photos. Everything is housed in a book package with magnetic clasp designed to look like the old Cloak & Dagger arcade machine. The discs load to animated main menus with traditional navigation options. 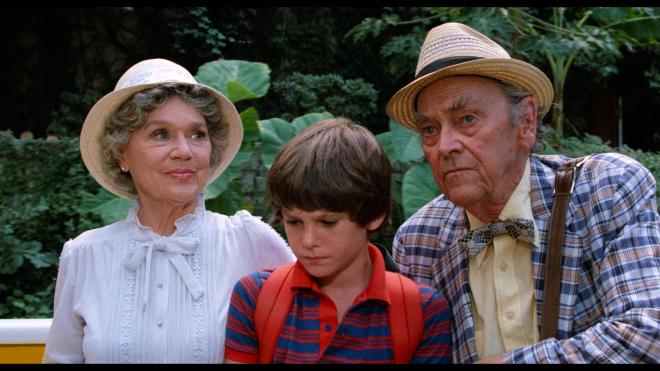 Sourced from a new 4K scan and restoration effort, Cloak & Dagger comes out of the box looking pretty damn fantastic for a 38-year-old film that hasn’t enjoyed a home video release since DVD. Details are impressive giving you full appreciation of the early 80s production design and costuming. I especially love the care and attention to Morris’ game shop littered with a variety of gaming references. Clothing textures and facial features get plenty of attention along with the San Antonio, Texas shooting locations. Film grain has a natural texture, there are a few scenes scattered throughout where it can look thicker and noisier than the previous scene, but nothing too distracting. Some slight speckling appears here and there, but the image is free of any serious age-related wear and tear.

The HDR10 grading is overall impressive giving to some nice deep-inky blacks. So much of the film takes place in shadows or at night that it’s nice to see all of the details without crush issues. Whites are crisp and clean without blooming. Primaries are overall appealing and strong but there are a couple of moments where I felt Reds looked just a little too hot. Davey’s red shirt accents and backpack on the river tour is a moment that just looked a tad over-saturated compared to the rest of the film and likewise, skin tones in these brief moments can look a little too warm but those are relatively brief moments amounting to small quibbles, really. All in all, this is a solid release and I can’t imagine it looking much better than this. 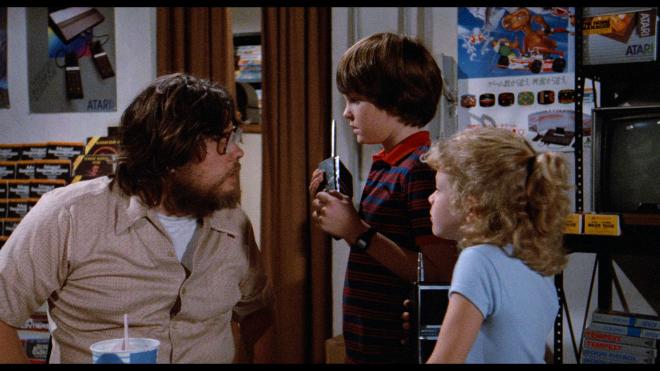 For the folks aiming to score this release for the Blu-ray, you’re not left out either. This is a pretty terrific 1080p presentation that holds its own. If this had just been a Blu-ray release there'd be no complaints. It may not get the full benefits with crisp clean details or the added enhancements of HDR as the 4K disc, but it's impressive. Details are generally strong throughout, but I felt like image depth wasn’t as strong as it could be. There were a few sequences I just thought looked rather flat - especially when comparing them to the 4K disc. I also thought skin tones were a little too peaked, and not as healthy. Colors are strong and black levels get the job done nicely. 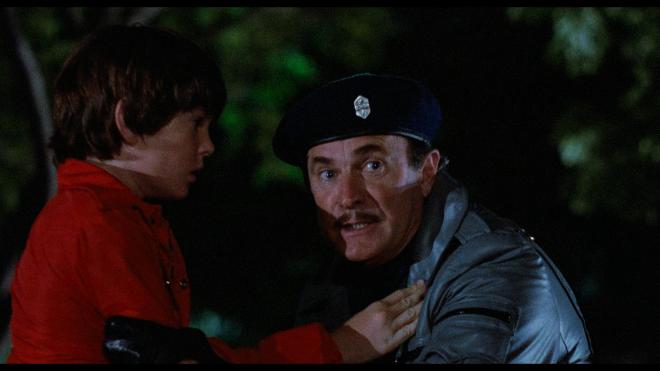 Both the 4K and 1080p discs come in with a strong and sturdy DTS-HD MA 2.0 track. Throughout the run, the dialog is clean and clear without issue. Sound effects are on point giving plenty of attention to the background atmosphere for big crowded scenes but also quieter tight tense moments enjoy their time as well. Scoring by Brian May (not that Brian May) is solid work hitting the emotional notes while keeping things adventurous and playful. May also turned in great scores for Mad Max, Mad Max 2: The Road Warrior, Gallipoli, Turkey Shoot, Freddie’s Dead, and Dr. Giggles before he sadly passed away in 1997. Gunfire enjoys that wonderful overpowered 80s quality where even the smallest weapon sounds like a howitzer. Levels are on point without issue and I didn’t notice any age-related issues to speak of; no hiss or cracks, or any of that nonsense. 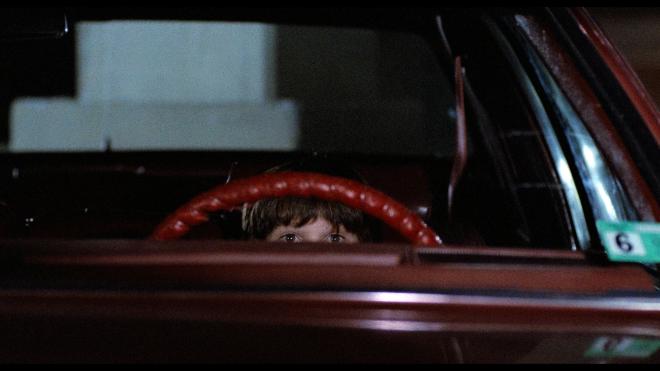 While it’s nice to get the film in both 4K and Blu-ray, Vinegar Syndrome thankfully gives you more than the film with fancy packaging. You pick up a fun audio commentary with screenwriter Tom Holland (again, not Spider-man) moderated by Joe Lynch, a new making-of documentary that’s a lot of fun to dig into, a new interview with Henry Thomas, and a ton more stuff that goes beyond the extensive material if you read the booklet. 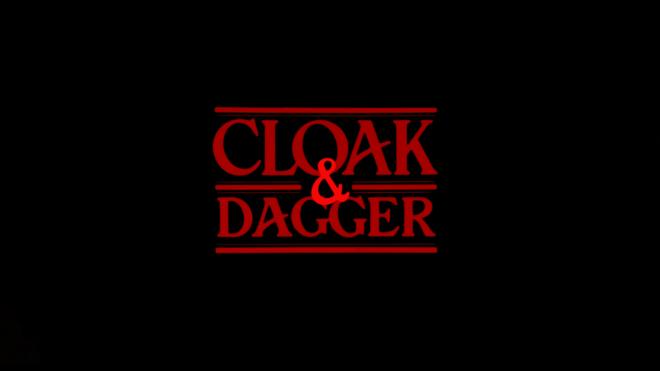 Cloak & Dagger may not be the greatest 80s nostalgic gems to get a 4K UHD and Blu-ray upgrade, but it’s still pretty damn good. Despite the very dated Atari references, the film still holds up thanks to smart direction and writing and the talented cast running the show. I hadn’t seen this film in decades and was pleased as punch throughout.

Vinegar Syndrome gives Cloak & Dagger the star treatment as the third title in their deluxe VSU line of releases. Coming in with an excellent 4K Ultra HD Blu-ray and 1080p Blu-ray transfer, this release comes with a great assortment of bonus features, a 40-page booklet, and some pretty slick and stylish packaging for another attractive release to slide on your shelf. If you’re a fan of the film or are excited to jump in some nostalgic waters, Cloak & Dagger delivers. Recommended