Thirty-five years later, Brian De Palma's The Untouchables continues to be viewed as a film bloated in creative flourishes elevated mostly by its memorable performances, namely that of Sean Connery as Irish-American beat cop Jimmy Malone. Basically, the classic police procedural is often knocked for being a case of "style over substance" while Pulitzer Prize-winning playwright David Mamet's script is riddled with platitudes and archetypes.

To some extent, I would actually agree with those assessments, particularly that of Robert De Niro's depiction of the infamous bootlegger and notorious crime boss Al Capone, which can feel like an unintentional caricature at times though nonetheless memorable. Objectively, Prohibition agent Eliot Ness, too, doesn't offer much depth beyond the rigidly moral and pious lawman determined to catch the gangland leader, which we've seen countless times before, but Kevin Costner's portrayal injects just enough gravitas to make him appealing and sympathetic. There are also times when the story touches on the amoral tactics employed to capture Capone, but those possible debates — or at least, the potential, for a more profound theme — are handed over to Malone to bear, keeping Ness as the tale's squeaky-clean, righteous hero.

In spite of all that, I still love and absolutely enjoy The Untouchables and would even argue that those supposed criticisms are precisely the point of De Palma's fictional retelling of a crime-ridden, Prohibition-era Chicago — historical inaccuracies, be damned. The film successfully attempts at reinventing the crime drama and gangster film of early pre-Hays Code Hollywood. And like those James Cagney, George Raft, Humphrey Bogart and Edward G. Robinson classics, the criminals are caricatured, recognizable archetypes. But it's combined with the post-WWII police procedurals that instead glamorized the dogged law enforcement hunting those famed criminals. De Palma and cinematographer Stephen H. Burum's highly-stylized bravura updates those familiar Golden Age of Hollywood yarns for contemporary moviegoers. And as far as I see it, the filmmakers prevailed in smoothly marrying all these concepts, and The Untouchables is an awesomely entertaining triumph that still satisfies after four decades. 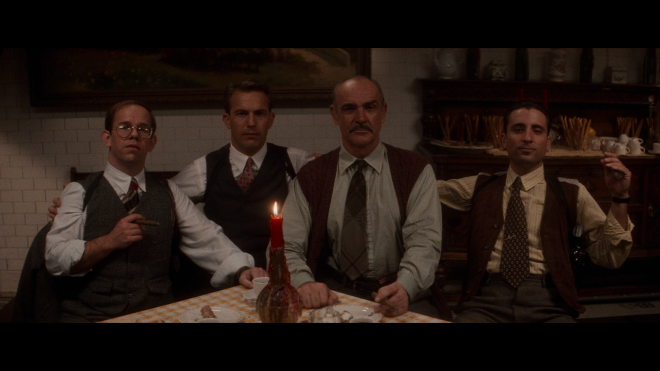 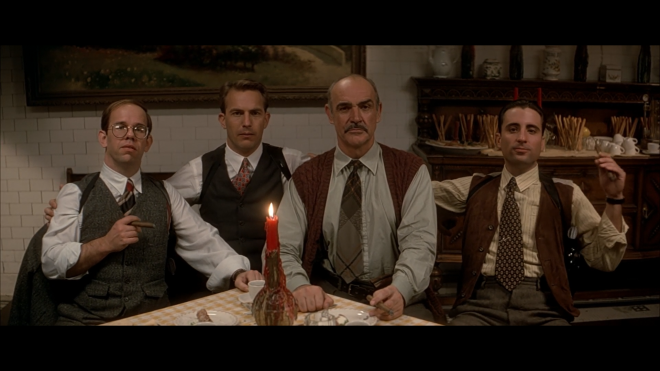 For a different take on the film, check out our review of the 2007 Blu-ray HERE.

Vital Disc Stats: The Ultra HD Blu-ray
Paramount Home Entertainment celebrates the 35th Anniversary of Brian De Palma's The Untouchables on 4K Ultra HD Blu-ray as a single-disc SteelBook with a flyer for a Digital Copy. When redeeming said code, users have access to the 4K HDR10 version in Dolby Digital Plus 5.1 audio. The dual-layered UHD66 disc is housed inside an attractive SteelBook package with a vintage, retro-looking design. At startup, viewers are taken directly to a static menu screen with the usual options along the bottom and Ennio Morricone's now-iconic score. 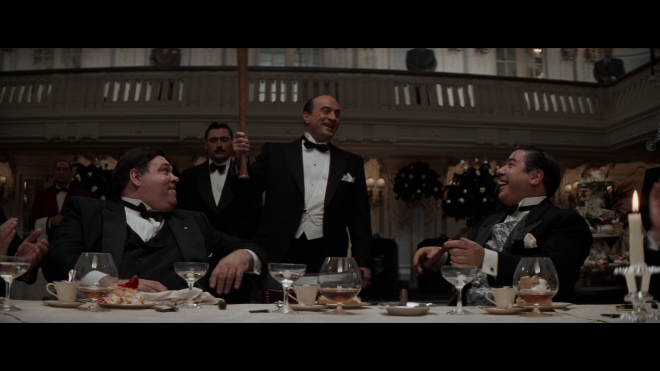 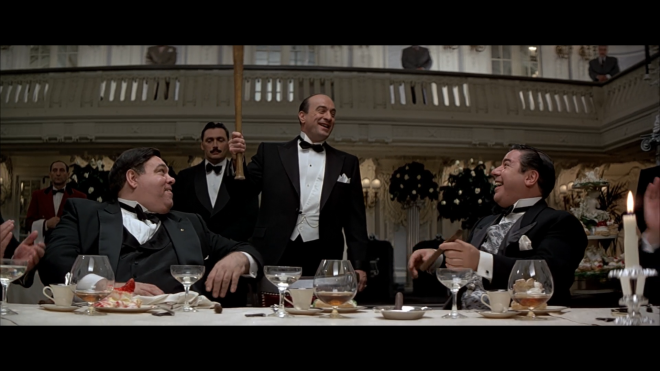 Crisp, radiant whites shower every scene, allowing for impressive visibility of the smaller details decorating the background. We can plainly make out the individual cracks and pits in the city streets while the fine lines and grain of the woodwork in Capone's penthouse are discrete. The lettering in newspapers and billboards is always sharp, and the textured fabric of the costume is striking. Black levels are inky rich and true with silky midnight shadows that never ruin the finer details within the darkest corners of the frame, providing the 2.35:1 image with a beautiful cinematic appeal and dimensionality. Specular highlights add another notable improvement, furnishing metallic surfaces with a realistic sheen and sparkle while the hottest areas have a more narrow brilliance allowing for better clarity and details. 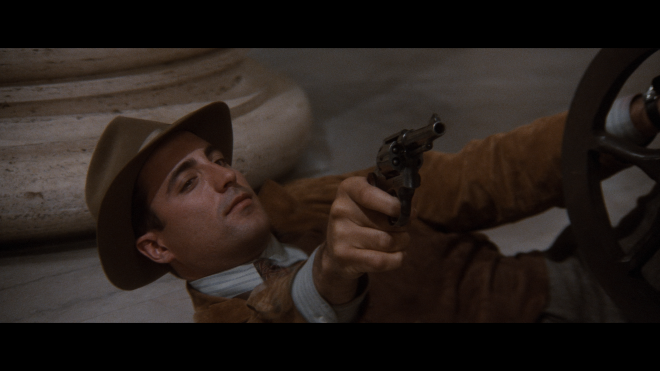 Also, the Dolby Vision HDR really brings Stephen H. Burum's cinematography to a new level compared to its HD SDR counterpart, making colors really pop while primaries look richer and more full-bodied, particularly the reds and yellows. Facial complexions appear natural and accurate with revealing, lifelike textures and a healthy, peachy-rose tone in the entire cast. The best moments showing where all these really make the visual pop are the scene when Ness sends his family away in the middle of the night and Malone and Stone arrive soon after, and of course, the now-iconic shootout on the stairs of the railway station. (Dolby Vision HDR Video Rating: 88/100) 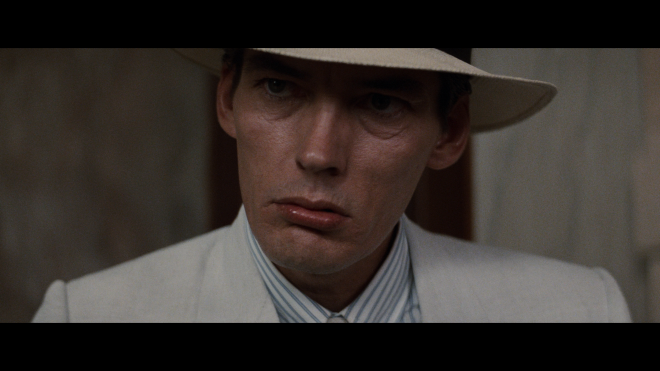 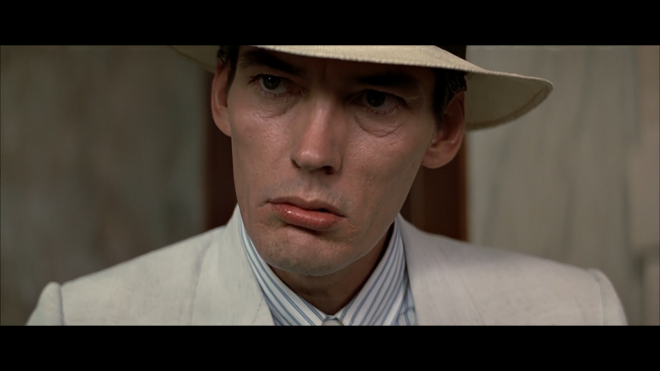 Ness and his untouchable agents raid home theaters with an outstanding and highly-satisfying Dolby Atmos soundtrack, filling the room right from the start with Ennio Morricone's memorable score and various minor effects. The music bleeds into the top heights and spreads across the three front channels with superb balance and extraordinary fidelity, creating an engaging and broad soundstage that immediately sucks viewers in. Imaging continuously feels expansive and spacious, layered with a variety of background activity that displays excellent, convincingly fluid movement between the speakers. Many of them also flawlessly pan overhead and move all around the listening area, mainly the ambient noise of the city, some of which, admittedly, are not as subtle as others and on a few small occasions, can feel a tad blatant, perhaps even forced. Nevertheless, by and large, the new Atmos mix is top-notch, generating a brilliant hemispheric soundfield with precise, well-prioritized dialogue reproduction that's never drowned out by the rowdiest, loudest moments. The low-end is appropriate and adequate for a catalog title of this vintage, providing an appreciable punch and oomph to the action and a welcomed sense of presence to Morricone's marvelous musical score.

It's worth noting, as well, that in spite of being impressed and enjoying this new object-based mix, I'm also a little disappointed to see that the option for a lossless version of the original soundtrack is not made available for this UHD edition. (Dolby Atmos Audio Rating: 92/100) 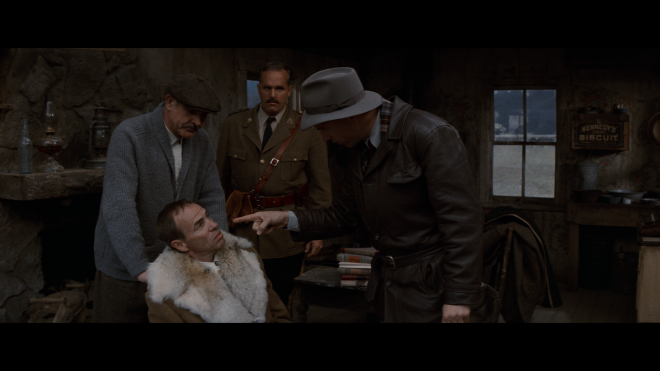 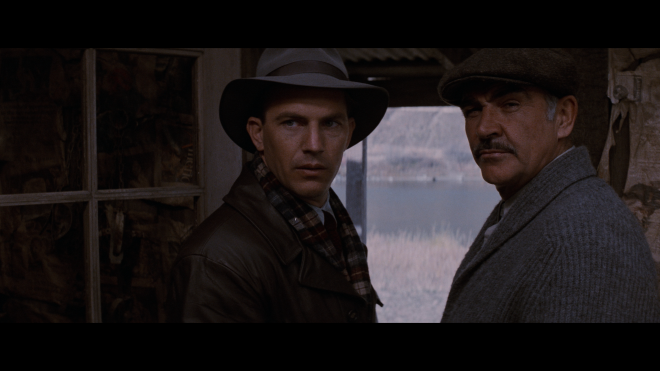