A pair of long-forgotten and borderline bad horror thrillers from the heyday of the "slasher" era are brought home courtesy of Vinegar Syndrome. With a subtle comedic undertone, Boaz Davidson's X-Ray offers an entertaining tale set inside a creepy hospital while David Paulsen's Schizoid borrows from the Giallo playbook but fails to do anything special with it. Delivering the creeps on Ultra HD Blu-ray, the 4K presentation of both movies arrives with excellent HDR10 video and strong DTS-HD MA soundtracks. With a healthy selection of supplements to boot, the overall UHD package is recommended for the curious collector.

Stylistically borrowing from the Italian Giallo playbook mixed with various "slasher" clichés, writer and director David Paulsen's mostly forgotten 1980 thriller Schizoid commences with a capable premise about a therapy group with anxiety issues being terrorized by an unknown assailant. But he ultimately fails to take advantage of the interesting and promising plot, succumbing to formulaic conventions with nary a moment of suspense or creativity during the murder scenes. However, if not for seeing Klaus Kinski and Christopher Lloyd appearing together on screen, there'd be little reason to watch this average whodunit murder mystery with an admittedly fun reveal twist at the end. 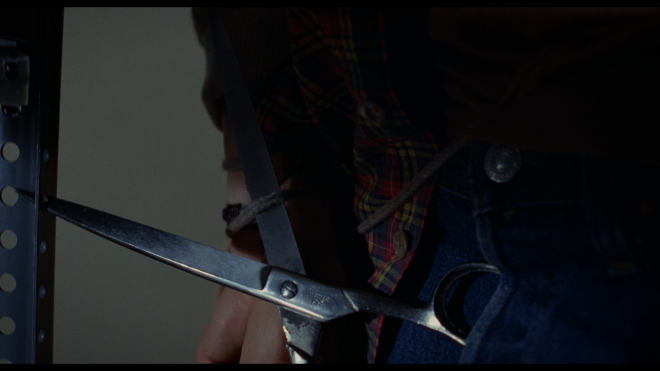 While Lloyd plays an oddball maintenance man and a patient of the group, Kinski stars as the group's therapist and recent widower with serious baggage of his own, especially with his daughter's (Donna Wilkes) very troubling psychological behavior. At the same time, advice columnist Julie (Marianna Hill) is dealing with her pressing issues, receiving threatening anonymous letters while others in the group are being murdered and simultaneously dealing with a still angry ex-husband (Craig Wasson) who wants her back. The little love triangle adds to the mystery as viewers run through the ensemble cast of suspects, continuously made to guess which is capable of murder and most in need of therapy. (Movie Rating: 2.5/5)

In X-Ray, Israeli filmmaker Boaz Davidson manages to turn a routine "slasher" formula into an unconventional thriller that mildly entertains thanks to a few nerve-racking moments. Paving the way for 90-minutes of terror inside a mostly vacant hospital, Davidson generates an unexpected level of suspense with simple yet effective camerawork that makes the long, undecorated hallways all the creepier and freakishly unsettling — all centered around former Playboy model and singer Barbi Benton. The whole night is spent with our terrified heroine not only trying to figure out why she's forced to remain in the hospital but also why a crazed killer in a surgeon's uniform is chasing after her. 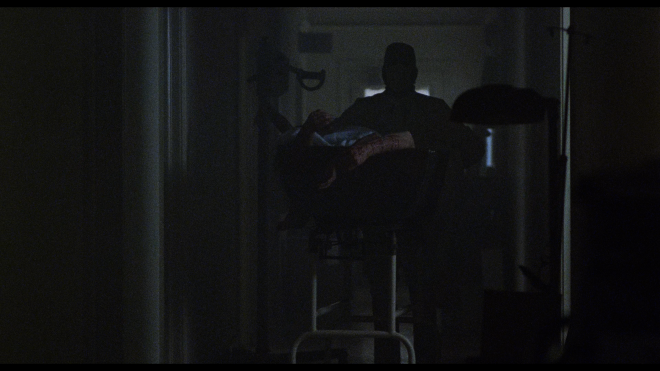 Although the motive of childhood resentment over a denied Valentine's Day present is admittedly rather lame, the script from Marc Behm (Charade) redeems itself by setting the killer's plan of bloody vengeance inside a hospital with pretty convoluted yet cleverly manufactured plot points, leading to a genuinely surprising reveal at the end. Also known as Hospital Massacre and Be My Valentine, or Else..., Davidson's movie follows the standard "slasher" blueprint with a holiday-themed tale of revenge, released right at the height of the subgenre's popularity. But interestingly, the story carries a subtly discerning postmodern feel, supplying the whole mystery with lightly comical energy that also entertains with a few spine-chilling thrills. (Movie Rating: 3.5/5)

Vital Disc Stats: The Ultra HD Blu-ray
Courtesy of Vinegar Syndrome, Schizoid and X-ray stalk their way unto 4K Ultra HD Blu-ray as a three-disc double-feature package with a limited-edition slipcover. Each movie is given its own dual-layered UHD66 disc on a center spindle while the third is a Region A locked, BD50 copy containing both movies and a healthy selection of new special features. All three discs are housed inside the standard black, eco-elite keepcase with a sturdy cardboard slipcover and reversible cover art. At startup, the disc goes straight to a menu screen with the usual options along the bottom, full-motion clips and music playing in the background. 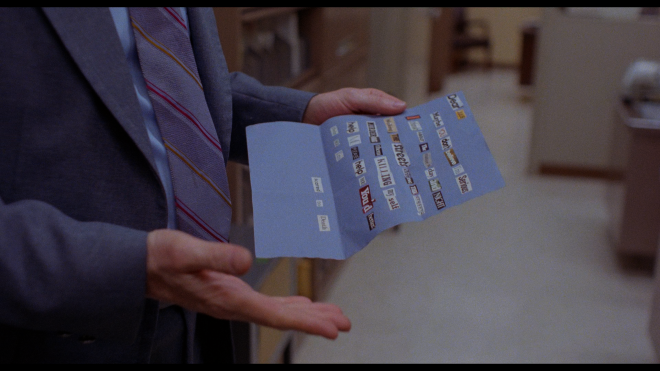 Schizoid
The cult horror favorite stalks Ultra HD with an excellent HEVC H.265 encode that's far superior to its Blu-ray predecessor, showcasing a spot-on contrast balance with vivid, brilliant whites from start to finish. The 2160p picture arrives with crisp, narrow specular highlights that supply the hottest areas, like the various lights and lamps, with a tight glow exposing the finer details, a sparkling brilliance along metallic surfaces and exceptional visibility in bright daylight exteriors. Coming from a fresh remaster of the original 35mm camera negative, the native 4K transfer is overall vibrant and gives the movie a new lease on life, looking fresh and rejuvenated with sharp definition throughout, from the textures of clothing and furniture to the individual hairs and Doug's hideous wallpaper pattern. Black levels are equally outstanding, providing the 1.85: image with deep midnight shadows, excellent visibility in the darkest corners and appreciable dimensionality. Most impressive is the richly-saturated color palette, boasting a sumptuous array of primaries and a full-bodied selection of secondary hues. Facial complexions appear accurate and healthy while also highly revealing, exposing the pores, minor wrinkles and negligible blemishes in the entire cast. Awash in a consistent fine layer of grain, the HDR10 presentation is surprisingly beautiful with a lovely film-like quality. (HDR10 Video Rating: 84/100) X-Ray
The patient checks in with few negligible scratches and bits of dirt in this HEVC encode, which is to be expected from a film of this vintage and production history. There is also a noticeable vertical scan line at around the 00:41:20 mark and some mild discoloration spots in the left side of the screen at around the 00:56:45 mark. Struck from the original 35mm camera negative, the native 4K transfer is nonetheless in great shape for a 40-year-old low-budget slasher, looking mostly clean and high-detailed throughout. We can plainly make out the individual hairs and whiskers in the actors, along with the fine texture of the costumes, furniture and walls.

Nicholas Josef von Sternberg's photography really benefits from the upgrade, boasting full-bodied primaries, particularly the animated variety of reds, and a dynamic array of secondary hues, supplying natural, accurate facial complexions in the entire cast. The biggest improvement is in the contrast and brightness balance, outfitting the visuals with crisp, dynamic whites and impressive specular highlights that maintain excellent visibility in the brightest spots while metallic surfaces come with a realistic sheen and tight glare from the lights. Awash with a fine consistent layer of natural grain, the 1.85:1 image enjoys deep, inky-rich blacks that penetrate deep into the screen without crushing or engulfing the finer details within the darkest shadows, providing the HDR10 presentation with an attractive film-like quality. (HDR10 Video Rating: 80/100) 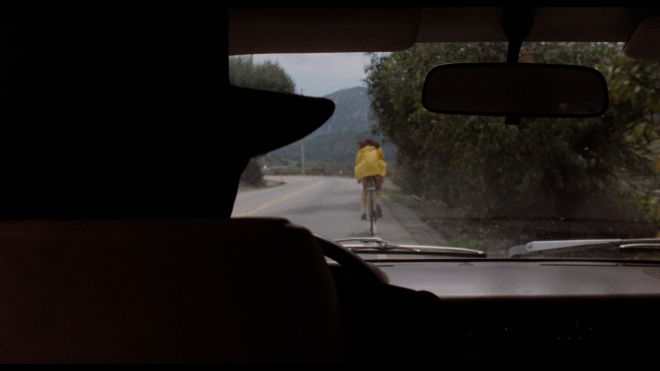 Schizoid
The DTS-HD MA mono soundtrack drives into home theaters with about the same results as was heard on the Blu-ray, which probably has more to do with the limitations of the source or the original sound design than any issues with the codec. Nevertheless, this track still offers some notable, albeit pretty small, improvements, starting with a more dynamic mid-range that flaunts better acoustical detailing and a cleaner distinction in the upper frequencies. Oddly, this doesn't appear to benefit Craig Hundley's score much although it's worth mentioning that the extra-breathing room occasionally allows for a slightly broader and warmer soundfield than before. Still, with well-prioritized, intelligible dialogue in the center, the lossless presentation feels somewhat narrow and limited with a low-end that ultimately feels adequate and just hefty enough to provide the visuals with some appreciable weight. (Audio Rating: 64/100) 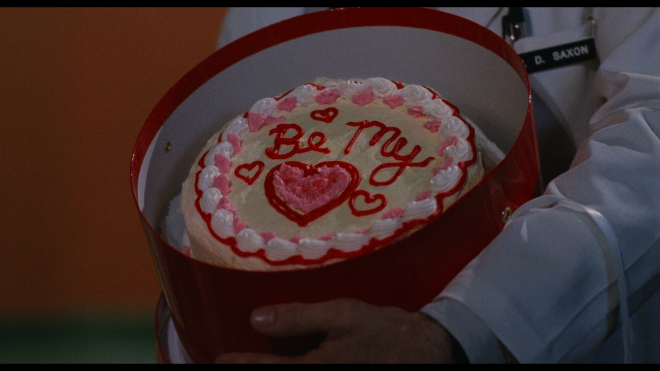 X-Ray
For this 4K edition, the DTS-HD Master Audio mono soundtrack is not much different than the Blu-ray from nearly ten years ago. However, there are some minor but nonetheless notable improvements in this Vinegar Syndrome release, giving it the edge over its predecessor, particularly in the mid-range. While the dialogue reproduction maintains excellent accuracy and clarity in the center, imaging feels wider with appreciable warmth and distinction, delivering better acoustical detailing in the upper frequencies. Best of all, Arlon Ober's oddly haunting score benefits from improved definition and clean differentiation between each note and the eerily ominous voices. Likewise, thanks to a slightly stronger low-end response, the sound design also comes with an appreciable sense of presence and weight, making for a fun listen. (Audio Rating: 68/100) 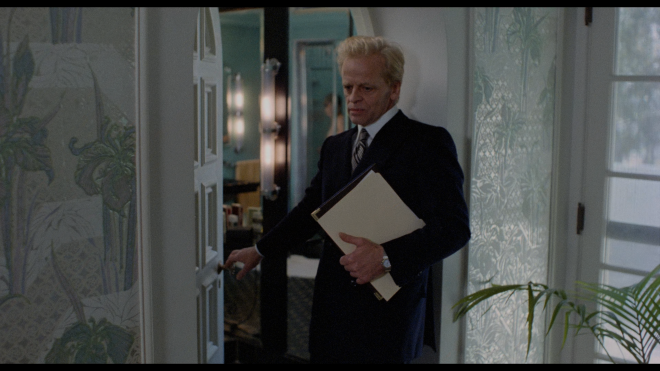 Aside from one archival feature ported over the previous Blu-ray release, this UHD edition comes with a new set of bonuses that are seemingly exclusive to this American release. 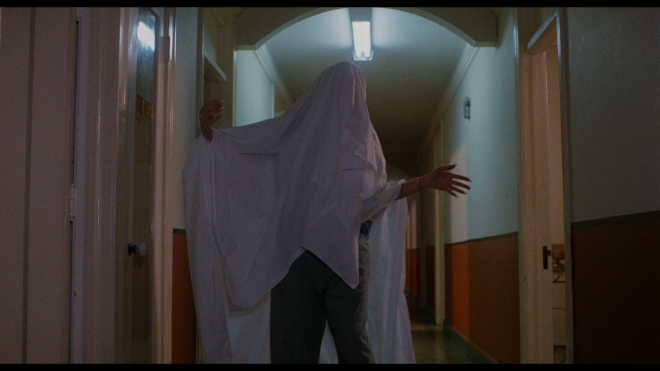 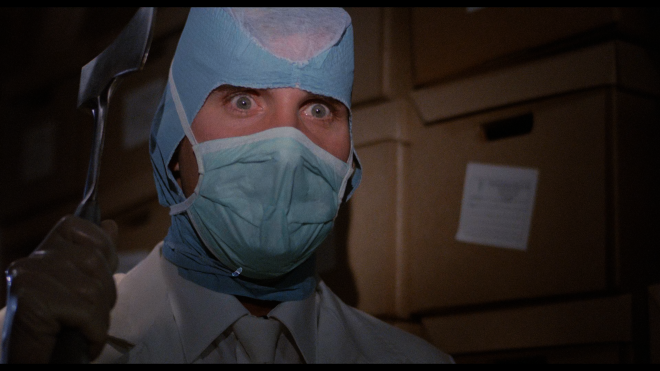 Vinegar Syndrome brings Schizoid / X-Ray, a pair of long-forgotten and borderline bad horror thrillers from the heyday of the "slasher" era, as a double-feature package. With a subtle comedic undertone, Boaz Davidson offers an entertaining tale set inside a creepy hospital while David Paulsen borrows from the Giallo playbook but fails to do anything special with it. Both movies arrive as a three-disc Ultra HD Blu-ray set with excellent 4K HDR10 video and strong DTS-HD MA soundtracks. The third disc also contains a great selection of supplements that are new to American audiences, making the overall package a worthy addition to the 4K library and recommended for devoted "slasher" fans.