For his third feature film, Joe Carnahan (Boss Level, Copshop) swiftly moves through a laundry list of characters in Smokin' Aces with none considerably developed or polished. There is no mistaking this brash, gun-slinging flick is meant to be nothing more than one hundred minutes of pure anarchy and complete pandemonium. Sleek style over substance takes precedence, delivering a loud riotous hootenanny full of explosive debauchery, self-indulgent violence, and a firearms extravaganza. The whole thing is, in all honesty, a wild, fanatical jubilee of insanity and an energized spectacle of violent behavior that's weirdly humorous and wildly entertaining. Compared to his previous efforts, Carnahan goes out on a limb with a plot that's as simple as they come and equips this far-from-quaint, adrenaline-fueled actioner with a speedy tempo and a psychotic ensemble of caricatures, thanks to Ryan Reynolds, Ray Liotta, Jeremy Piven, Alicia Keys, Taraji P. Henson, Nestor Carbonell, Common and Tommy Flanagan.

There is also something oddly comical about Ben Affleck, Peter Berg, Jason Bateman, Andy Garcia, Chris Pine, Matthew Fox and Wayne Newton being involved in this enormous fiasco. At times, we move between characters so quickly that after a while everything becomes a blur, and the movie is just one big mesh of random dialogue and faces gunning for a major showdown at the end. For some, this lack of development or a central character will likely be a turnoff, but for those willing to give it a chance, they may find a lively, brazen display of graphic mayhem and ridiculousness meant purely for mindless popcorn fun. It's also somewhat predictable, except for the last person standing, which makes for an amusing twist. Displaying a unique, glossy sheen mixed with second-rate filmmaking grittiness, Carnahan's Smokin' Aces is ultimately a strange concoction of splatterpunk ultra-violence and a cheeky revision of grindhouse panache, a salute to 70s low-budget, drive-in B-material normally billed as a double feature. 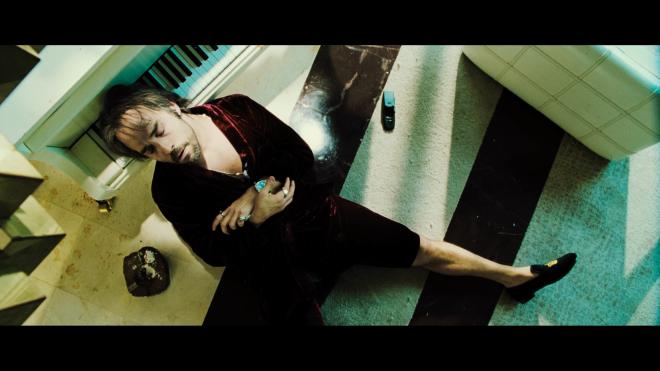 Universal Studios Home Entertainment celebrates the 15th Anniversary of Joe Carnahan's Smokin' Aces with a two-disc 4K Ultra HD combo pack with a Digital Copy code. When redeeming said code, owners are granted access to the 4K UHD version in HDR10 and Dolby Digital Plus 5.1 audio. The Region Free, dual-layered UHD66 and Region Free, BD50 discs sit comfortably on the opposing panels of a black, eco-elite keepcase with a glossy slipcover. At startup, viewers are taken to a menu screen with the usual options along the bottom, quick access to the bonuses on the left, full-motion clips and music playing in the background.

Carnahan's spectacle of nihilistic mayhem takes aim at Ultra HD with a great-looking HEVC H.265 encode, offering a welcomed upgrade over its Blu-ray predecessor. However, it's worth taking into consideration the heavily-stylized cinematography meant to complement the movie's bonkers premise, so the improvements are perhaps small or not as impressive as other releases of similar ilk. Nevertheless, this upscaled transfer comes with a finer, more refined grain structure that ranges from the thick and prominent to light yet very visible, depending on the scene and location. Fine lines and objects are also slightly sharper with several scenes exposing more details in the costuming, the accessories of some characters, the buildings and Buddy's hotel room. Some moments are, of course, softer than others, such as the back and forth between Messner and Carruthers inside the van or the argument between Buddy and Sir Ivy. But this could easily be chalked up to an inherent result of the stylized photography.

This is especially true for the aesthetic visuals the filmmakers were vying for where the contrast deliberately runs hot with lots of blown-out highlights and intentional blooming. Regardless, the HDR10 presentation displays better and more moderate balance with a tighter, narrower glow in the specular highlights to reveal some of the finer details within the hottest spots. Brightness levels likewise deliver fuller, truer blacks with strong visibility in the darkest, inky shadows, providing the 2.35:1 with an attractive cinematic appeal. The biggest and arguably most immediate improvement comes from the richly-saturated color palette, splattering the wild visuals in animated crimson reds of the hotel security jackets and the dark ruby garnets of the blood while much of the hotel interiors are bathed in shades of warm golden yellows, fiery oranges, ambers and lively emerald greens. Exterior scenes show vibrant cerulean blues in the sky and an array of full-bodied earth tones, and facial complexions are highly revealing with healthy, peachy-red hues that are accurate to hot climate. (HDR10 Video Rating: 78/100)

This UHD edition also comes equipped with an awesome DTS:X soundtrack that's on par with the video, offering a small upgrade over its DTS-HD MA brethren. The design remains aggressive and thunderous during action sequences as its lossless counterpart, but this object-based version, unfortunately, fails to take full advantage of the additional ceiling speakers.

By and large, the space above the listener is relatively quiet except for one moment that stood out, which was the helicopter with Deputy Director Locke onboard convincingly and flawlessly flying directly overhead. Aside from that, Clint Mansell's original score is really the only aspect of the design that benefits from the extra breathing room, lightly bleeding into the height channels and effectively expanding the soundfield. Most of the action takes place in the surrounds as various atmospherics move around the room and bullets whiz by from every side as debris discretely scatters everywhere. In the front soundstage, channel separation is persuasive with outstanding movement between the channels, exhibiting a detailed, extensive mid-range that remains distinct during the more bombastic moments. Amid all the rowdy loudness and insanity, the dialogue never falters and remains distinct throughout. However, the low-end is somewhat disappointing, missing the same force and impact heard on the Blu-ray, but this object-based track still maintains enough punch to give the visuals an accurate, appreciable weight. (DTS:X Audio Rating: 82/100)

The same set of supplements as the 2010 Blu-ray are ported over for this UHD edition.

Fifteen years later, Joe Carnahan's Smokin' Aces remains an adrenaline-fueled, gun-toting bonanza of action, and a cheeky salute to gritty 70s low-budget action flicks. With some fancy photography and visual design, the movie is sleek and surprisingly entertaining. The bonkers spectacle takes aim at Ultra HD with an excellent 4K HDR10 presentation and an awesome DTS:X soundtrack, offering fans a welcomed step-up from its Blu-ray predecessor. Porting over the same collection of bonus material, this UHD edition is recommended for those looking to upgrade.