Just in time for Independence Day, 1776 arrives on 4K UHD in a sumptuous 50th anniversary edition. Director Peter H. Hunt's rousing film adaptation of the Tony Award-winning Broadway musical about the contentious ratification of the Declaration of Independence may take some historical license, but it sure is entertaining and strikes a special chord in these turbulent times. Gussied up with Dolby Vision HDR and decked out with Dolby Atmos audio, 1776 looks and sounds great, too. Four different versions of the film are included in this set, which comes very Highly Recommended.

With all the talk these days about the fragility of democracy and how incessant partisan squabbling prevents our elected officials from reaching a consensus on critical issues facing our country, it just might be time to revisit 1776. Though the 1972 film adaptation of the Tony Award-winning Broadway musical by Sherman Edwards and Peter Stone takes a rather whimsical look at the events leading to the signing of the Declaration of Independence, it nevertheless incisively documents how a band of men from disparate cultural and economic backgrounds with different beliefs and different agendas came together one summer to forge a nation. They debated, bickered, fought, cajoled, jockeyed, manipulated, and strategized over the course of several days, but most importantly they compromised for what they all knew would be the greater good.

In the high-stakes, high-octane world of politics today, compromise seems lIke a lost art, but with its witty, substantive songs, heated confrontations, and philosophical musings, 1776 reminds us of its beauty and its worth. First-time director Peter H. Hunt, who helmed the stage show, opens up the play, but never sacrifices the intimacy, ideas, joviality, and passion for liberty that define this enduring work. Whatever your level of patriotism, it's tough not to be stirred and moved by the actions of the Continental Congress, and 1776 captures that momentous historical event with humor, insight, and grace.

Producer Jack L. Warner, reportedly haunted by his decision to cast Audrey Hepburn over Julie Andrews in My Fair Lady eight years before, demanded the entire Broadway cast reprise their roles in the film. The decision was risky for a big-budget musical, because at the time none of the actors were household Hollywood names, but it paid off. William Daniels as John Adams, Howard Da Silva as Benjamin Franklin, Ken Howard as Thomas Jefferson, and John Cullum as Edward Rutledge all make notable impressions, while the equally unheralded Hunt delivers a polished, elegant production that reflects his deep affinity for the material. 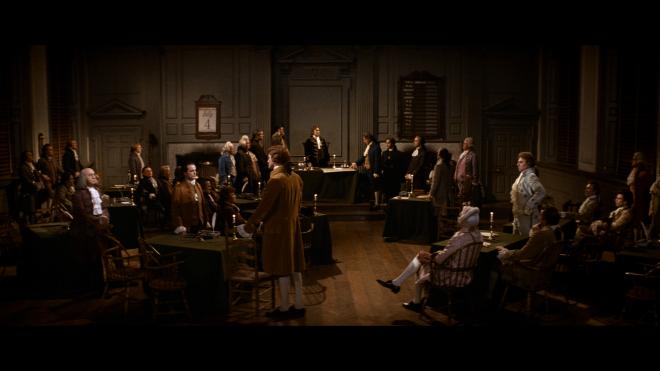 1776 deftly balances history with entertainment. Of course some dramatic license is taken, and in the 50 years since the film premiered we've learned more details and debunked some myths about what went on at the time, making it easy to forgive most of the film's errors. Stone's literate script hammers home several important points (the compromise over slavery is especially gut-wrenching), but it's Edwards' score that really gets to the heart of the matters depicted on screen. Edwards incorporates actual quotes from the letters between Adams and his wife Abigail (Virginia Vestoff) into the lyrics of their duets and has an uncanny ability to encapsulate and explain political ideologies through song. The brilliant "Cool Conservative Men," which was cut shortly before the movie's release but rediscovered years later and reinserted into the film, masterfully presents the opposing viewpoint in a clever yet pointed manner. (According to Hunt and Stone on their commentary track, the song was deleted at the behest of President Richard Nixon, who felt it painted an unfavorable picture of the Republican Party. Jack Warner honored Nixon's request, but reportedly rued the number's excision for the rest of his life.)

Much like another film Warner summarily cut to its detriment - the 1954 version of A Star Is Born - 1776 underwent a reconstruction many years ago when much of its deleted footage was rediscovered. The original 141-minute theatrical version morphed into a 165-minute director's cut, which now stands as the movie's definitive edition. (There's also a 168-minute extended cut that includes an extended musical number and brief reprise of one song and a 178-minute laserdisc version, both of which are also included in this 4K UHD set.) While 1776 now can be viewed as Hunt intended, which is a blessing, length and pacing remain nagging issues. A 40-minute gap between songs early in the film - very rare for a musical - disrupts the flow, and some dialogue scenes drone on too long. 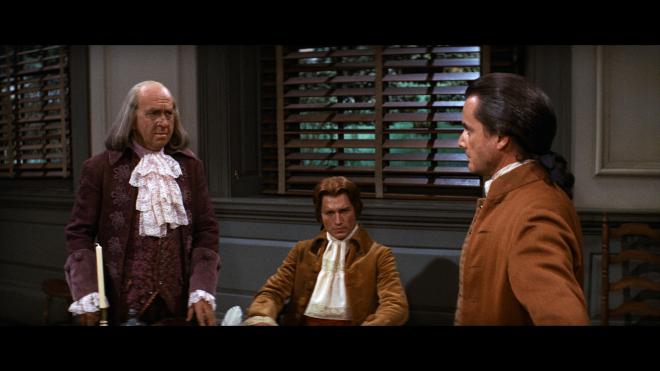 At times, 1776 can feel a bit pompous and stuffy, but then again, those adjectives have described our government for centuries. The welcome light-hearted moments may exaggerate the various foibles of our founding fathers, but they're essential for entertainment value. Though the film's outcome is never in doubt, the climax still wields plenty of power, and Hunt leaves us with a resonating image that emphasizes the gravity and audacity of declaring independence, as well as the far-reaching consequences that would result from the historic votes of thirteen renegade colonies. 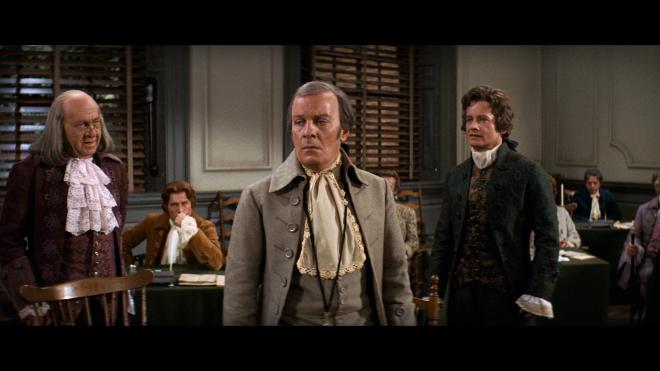 1776 is not my favorite musical. It's taken me years to warm up to it, but I've come to appreciate the film, and believe that appreciation will grow as the years tick by and history continues to test and challenge the great American experiment. Its songs, banter, and conviviality notwithstanding, 1776 shows us democracy is messy, imperfect, and requires constant hard work, but above all, democracy is essential. Lucky for us, John Adams didn't heed his colleagues exasperated pleas to "for God's sake, sit down!" Adams kept standing, kept speaking up, kept fighting for his beliefs, and 1776 celebrates the fruits of his labors and the labors, foresight, and compromises of so many others.

Vital Disc Stats: The 4K Ultra HD Blu-ray
1776 arrives on 4K UHD packaged in a standard case inside a sleeve. Four - that's right, four - versions of the film are included in this set. The 165-minute Director's Cut and 168-minute Extended Cut are included in both 2160p/HEVC H.265 and 1080p/AVC MPEG-4, while the 141-minute theatrical version is presented in 1080p only and the 178-minute extended laserdisc version is presented in standard definition. Three discs (one 4K UHD disc and two Blu-ray discs) are packaged in the case, along with a leaflet that contains a code for the Movies Anywhere digital copy. Default audio for the 4K UHD disc is Dolby Atmos (Dolby TrueHD 7.1 compatible). A DTS-HD Master Audio 5.1 track is also included on the 4K UHD disc and is the default audio on the Blu-ray disc. Once the discs are inserted into the player, the static menus with music immediately pop up; no previews or promos precede them. 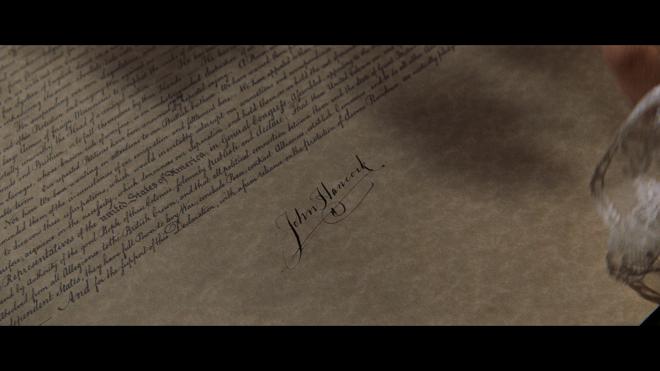 We should all look so good at 50. Sony honors the half-century anniversary of 1776 with a pitch-perfect 2160p/HEVC H.265 transfer with Dolby Vision HDR that outclasses every previous home video version of this enduring musical. Though the 2015 Blu-ray disc, which is included in this set, looks mighty fine, it's no match for this 4K UHD rendering, which seems to be struck from the same master as its 1080p counterpart. The 2160p transfer looks more filmic (the enhanced definition brings out more of the print's grain) and more faithfully honors Harry Stradling Jr.'s Oscar-nominated cinematography (the only Oscar nod the movie received). It also flaunts better clarity and contrast. The glistening sweat on the men's faces is more noticeable, costume fabrics exhibit more texture, shadow delineation is crisper, blacks are richer, and whites are brighter.

The wider color spectrum of Dolby Vision deepens hues without bloating their intensity. The verdant green landscapes and crystal blue skies look utterly natural, the various shades of wood are distinct, and the interior nocturnal scenes shot by candlelight exude a lovely, warm orange glow. Flesh tones are spot-on throughout, razor-sharp close-ups highlight pores, bushy mustaches, and faint facial blemishes, and not a single nick, mark, or errant scratch dots the pristine source. Some softness occasionally crops up, but such instances are baked into the original film and not unique to this transfer. 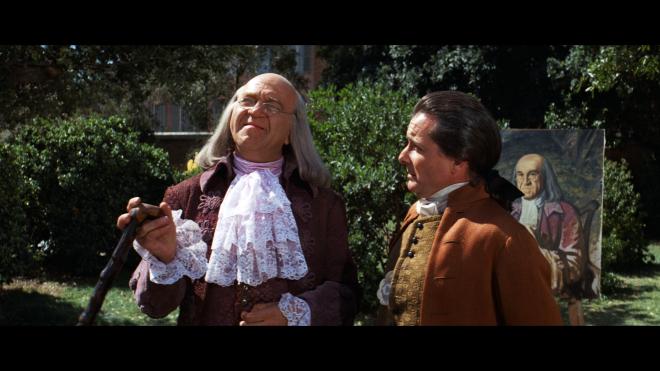 1776 may have been made in 1972, but in 2022 this historical musical is state-of-the-art and looks better in 4K UHD than many contemporary films. Even if you own the excellent 2015 Blu-ray, you shouldn't hesitate to upgrade. 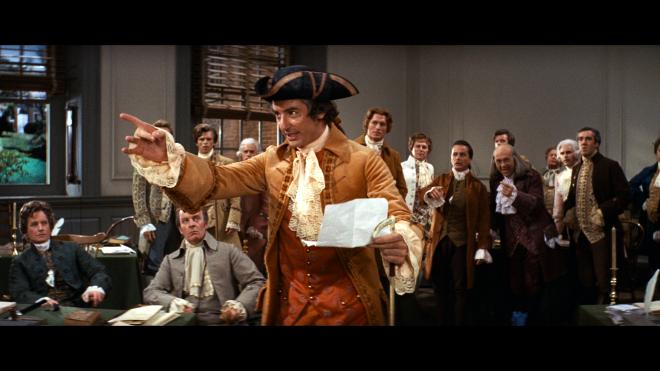 1776 doesn't scream Dolby Atmos, but I applaud Sony for upgrading the audio track, even if the film doesn't come close to maximizing - or even utilizing - the platform's capabilities. That said, the sound is crystal clear and makes marvelous use of the five core speakers. Some distinct activity in the rears widens the soundscape and piques aural interest, while lots of stereo separation across the front channels heightens the impact of both dialogue scenes and musical numbers. Excellent fidelity and solid bass frequencies help the songs come to life, and a wide dynamic scale handles all the highs and lows of the robust orchestrations without a hint of distortion. (It's too bad the film's overture, entr'acte, and exit music are not included on the Director's and Extended Cuts, as they undoubtedly would sound amazing.) All the dialogue and song lyrics are well prioritized and easy to comprehend, and any age-related hiss, pops, or crackle have been erased. A DTS-HD Master Audio 5.1 track is also included on the 4K UHD disc and supplies equally strong yet nuanced sound. 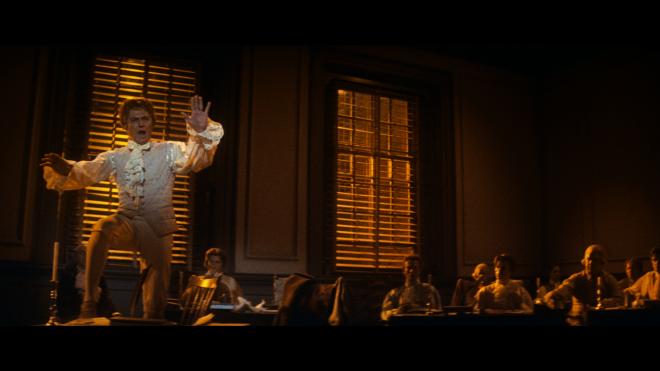 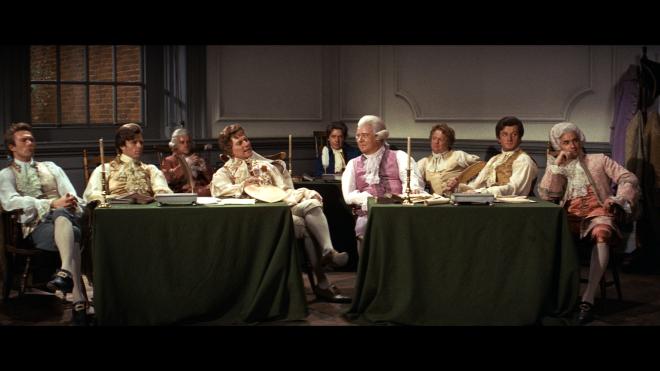 Two additional versions of 1776 reside on a separate Blu-ray Special Features disc. All the other supplements are housed on the 2015 Blu-ray disc that's included in this set. (The audio commentaries for the Director's and Extended Cuts are included on both the 4K UHD and Blu-ray discs.) 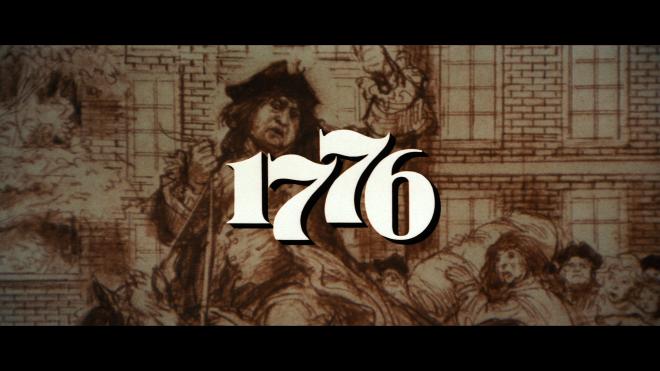 In times of strife, it's always good to look back and reexamine what matters most. With clever, lyrical songs, arch wit, and fervent passion, 1776 reminds us of the core values upon which the United States of America was built, as well as the committed men who engineered its independence. The film adaptation of the Tony Award-winning musical runs a bit long, but it's beautifully mounted and features an array of colorful performances. A breathtaking Dolby Vision transfer and immersive Dolby Atmos audio distinguish Sony's 50th Anniversary release that reverently honors this patriotic and entertaining film. If you're a 1776 fanatic, an upgrade is a must. Highly Recommended.