One of the most talked about and scrutinized thrillers of the 90s, Bryan Singer’s Oscar-winning The Usual Suspects comes to 4K Ultra HD Blu-ray from Kino Lorber Studio Classics. Even though the film’s success hinges on one hell of a twist ending, the film is still a masterclass example of tight screenwriting, excellent performances, direction, and pitch-perfect editing. And now the film looks better than ever with an excellent Dolby Vision transfer, clean audio, and new and archival bonus features not seen on disc since DVD. Highly Recommended

A burning boat in the harbor leaves nearly thirty men dead. The only survivor is a con man called “Verbal” Kint (Kevin Spacey) and he has total immunity from the district attorney after delivering his testimony. But that’s not good enough for Customs agent Dave Kujan (Chazz Palminteri). A crooked cop he's been investigating for years Dean Keaton (Gabriel Byrne) is supposed to have been on that boat and died, but they haven’t found his body. Now Kujan has only a couple of hours before Verbal makes bail to get the truth about Keaton, his cohorts McManus (Stephen Baldwin), Hockney (Kevin Pollak), Fenster (Benicio Del Toro), and their connection to a near-mythical underworld character known as Keyser Söze. 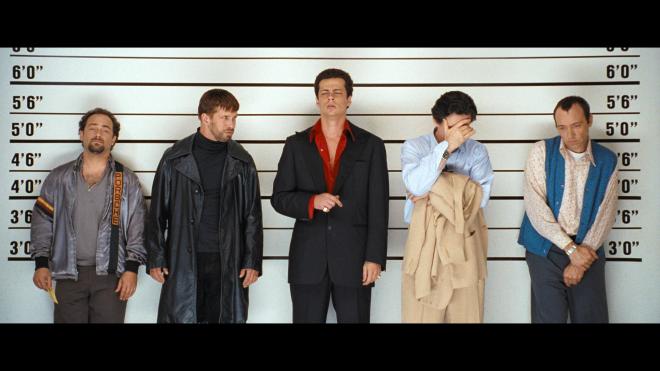 So, The Usual Suspects is one of those great movies that you really want to talk about and dig into and analyze and expound upon at length… but really shouldn’t. At least not around people who haven't seen it. This is one of those thrillers where if you were to divulge a little piece of the plot that seems innocuous, you may actually be giving away more than you think you are and you have thus spoiled the movie. For a movie reviewer and major fan of this film, that is a pretty shitty place to start from. I desperately want to talk about this film, but I’m not going to. Even though this film is nearly thirty years old now and has been discussed ad nauseam, there’s a whole generation of film fans who are about to experience it for the first time and I don’t want to ruin a moment of it for them.

In the way back long ago time in 1995, I was a 13-year-old burgeoning film nerd. I didn’t know anyone in my age group that liked movies as much as I did and could analyze, discuss, or even quote from an extended pool of favorite titles. Of the many films I admired at that time, The Usual Suspects was and remains to this day one of my all-time favorite films. From Bryan Singer’s slick direction to Christopher McQuarrie’s Oscar-winning hard-boiled screenplay to the incredible cast assembled for this film, I was fascinated by every frame. It’s a labyrinth of a plot that keeps the audience’s attention and forces them to work through all of the twists and turns. “What is the truth? What is the lie? Is there truth in the lie?” - I love movies that spin you about in any number of ways while delivering one hell of an exciting film making you instantly want to sit back down for another viewing to unravel it all and see if the major twists still hold up.

While two of the major players in this film (Bryan Singer and Kevin Spacey) have become something of a problematic issue to discuss in recent years, nevertheless, the rest of the film stands on its own merits. The rest of the cast including Gabriel Byrne, Kevin Pollack, Benicio Del Toro, and even Stephen Baldwin is worth celebrating. With McQuarrie’s screenplay, these actors all turn in top-notch performances. With John Ottman running double duty as both the film’s editor and composer, every scene crackles with bristling dialog, a moody atmospheric score, and impressive visuals from cinematographer Newton Thomas Sigel all on a slim no-frills production budget. It’s a hell of a film that no matter how many times I see it or how often, I’m immediately pulled into this little criminal underworld for one hell of a ride. So enough of me talking about it. If you’ve never seen The Usual Suspects or if it’s been something close to thirty years since it was released when you last saw it, it’s time for you to pop some corn, turn out the lights, and give this flick a spin.

Vital Disc Stats: The 4K Ultra HD Blu-ray
The Usual Suspects hijacks a new two-disc 4K Ultra HD Blu-ray release from Kino Lorber Studio Classics. The 4K version is pressed on a BD-100 disc while the 1080p scores a Region A BD-50. The discs are housed in a standard black case with identical slipcover artwork. The discs load to animated main menus with standard navigation options along the bottom of the screen. 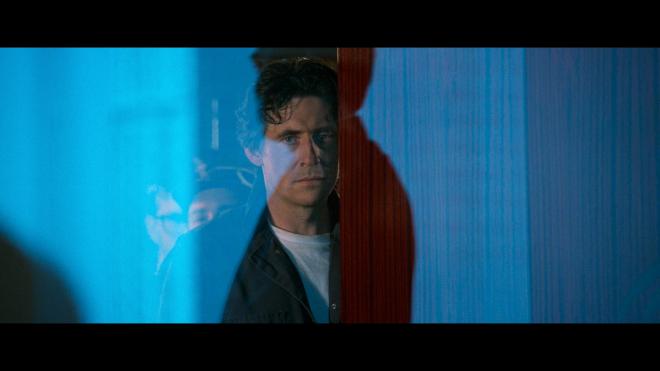 After languishing on Blu-ray with a decent enough but ultimately mediocre Blu-ray, The Usual Suspects gets a fittingly terrific 2160p Dolby Vision HDR transfer for its 4K Ultra HD Blu-ray debut color graded and approved by cinematographer Newton Thomas Sigel. With the stylish visuals blending deep-focus shots and tight claustrophobic close-ups, every nook and cranny of any actor’s face and wardrobe is on full display. Pay close attention to the production design as well, various props and background pieces give you a few more clues about the film - and now you can fully appreciate those little pieces. Film grain is present without any signs of being scrubbed or DNRed into oblivion for a rich cinematic experience.

This film loves its shadows and dark spaces; the last act of the film is virtually all in shadow and dark black locations and never once does this Dolby Vision transfer slip up. Fine lines and details are visible without losing deep inky blacks and the light and shadow gradience for these sequences are spot on. Primaries are in terrific shape, lush and vivid without being overblown. Each cast member practically has a signature color so reds, blues, yellows, and all the shades in between are well represented. Skin tones are also notably healthier looking than the past Blu-ray releases. Whites are brilliantly crisp without blooming - unless blooming was already intentional as with the early police interrogation scenes. 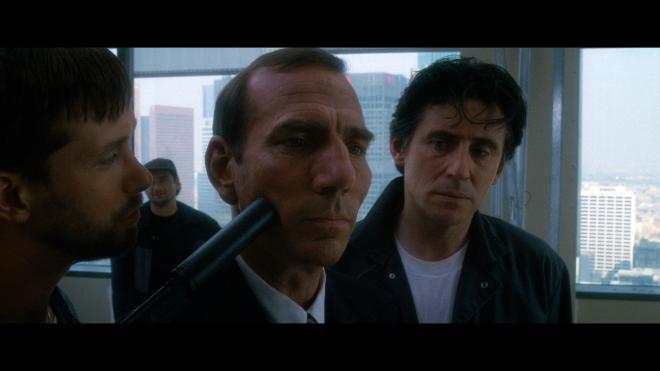 There are still a couple of soft shots that have always looked a little iffy on past releases. These scenes are even more notable now in 4K. An example is after Verbal finishes telling part of his story about Keaton and the following shot has Chazz Palemintari standing in front of Dan Hedaya’s desk. In this scene Palemintari is in closeup full focus while Hedaya is seated in the back but also in full focus, this shot has always looked a little weird to my eye, as if Palemintari was composited into the frame and not actually shot with Hedaya. There are a few other shots like that throughout the film that look ever so slightly “off” but nothing to get too worked up over. As a whole, this is another excellent transfer from the MGM archive easily besting all previous home video releases. 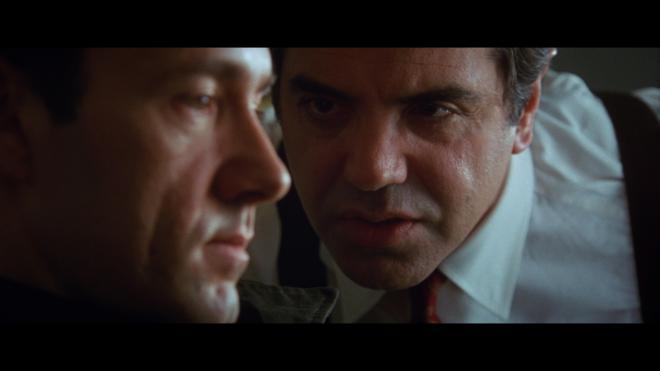 This release of The Usual Suspects offers up a DTS-HD MA 5.1 track and a DTS-HD MA 2.0 track. Flipping between discs, it sounds as though the same previous DTS-HD MA 5.1 mix has been ported over. If it’s a new track, the differences are negligible. The film is dialog-heavy and often doesn’t make full use of the surround channels. There are the little atmospheric flourishes to make specific locations sound more active and engaging and that keeps those surround channels working, but not in such a dynamic way that calls much attention to itself. John Ottman’s score still sounds fantastic with clean clear dialog throughout. Flipping over to my receiver’s DTS Neural:X function, the mix gets a little more life and spacing in the channels feels a little more notable. I only gave the 2.0 a cursory listen and it’s serviceable, but if you can roll the 5.1, that’s the route to take. 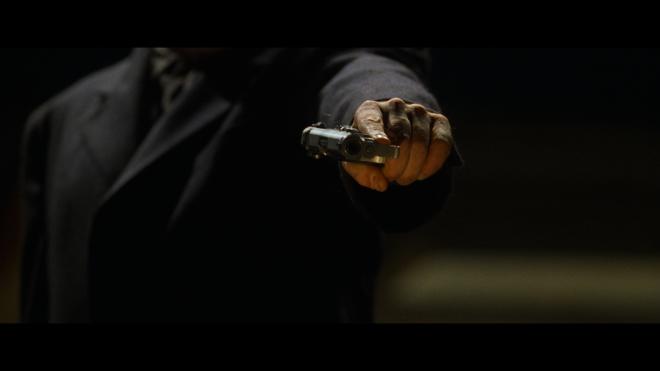 For this release, fans are treated to a great selection of new and archival bonus features to pick through. Most of these extras were gifted to fans for MGM’s Special Edition DVD but sadly were axed out of the previous Blu-ray releases, so there’s a whole group of fans who may not have ever heard or seen these materials. The two audio commentaries are a great listen. The Singer/McQuarrie track offers a lot of insight into crafting the story and pulling the film together while the John Ottman commentary is unique in that he was the film’s editor and composer and he details his various approaches to each facet of the film, he’s alone so sadly he doesn’t have anyone to feed off and can be a bit bland but it’s still a good listen. The new interview with Newton Thomas Sigel is well worth checking out as he details shooting on such a small budget and how they approached shooting the various interrogation sequences and other facets of the film. 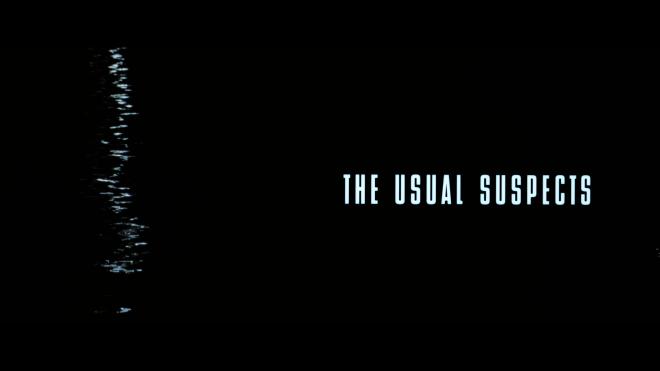 The Usual Suspects is one of the best films of the 1990s - for me at least. I was blown away when I first saw it and I continue to marvel at it nearly thirty years later. From the precision direction from a relatively untested Bryan Singer to the crackling Oscar-winning screenplay to the cast full of colorful players delivering some of their best work, this is one hell of a cinematic experience. Granted, it’s an easy one to spoil for newcomers so it’s best to watch it as soon as you can and then discuss it with folks that have already seen it. Kino Lorber Studio Classics gives this excellent film the fitting disc release it’s long needed offering up a welcome and beautifully impressive Dolby Vision transfer, slick audio, and a new interview with the film’s cinematographer along with all of the archival bonus features that have been missing in action since the film’s Special Edition DVD release. Needless to say at this point, I’m calling this one Highly Recommended