Going on nearly thirty years, Terry Gilliam's sci-fi masterpiece 12 Monkeys remains a complex, thought-provoking film touching on various philosophical themes and featuring memorable performances by Bruce Willis and Brad Pitt. Courtesy of Arrow Video, the cult sci-fi classic saves the future on 4K Ultra HD with a stunning, near-reference Dolby Vision HDR presentation that's sadly hindered by one significant video error, and it is accompanied by the same pair of lossless audio tracks and bonus material as before. Nevertheless, and in spite of that error, this UHD edition still manages to land a reluctant Recommendation while we wait for word from Arrow Video.

[UPDATE: Arrow Video issued a statement regarding the video error, which is shared below.]

"With so many deep underlying questions on the bleak outcomes of our technological advancements, [Terry] Gilliam does an impressive job of keeping it all together in an entertaining and coherent manner. Typical of his other work, ideas are expressed visually, taking a straightforward plot and turning it into a more fantastical, cryptic, and maddening exploration of the relationship between power and the individual. Look at how the scientists of Cole's [Bruce Willis] present time are contrasted with scenes of him in the past interrogated by psychologists at the institution. While the methods of communication have become more perverse in the future, their disciplinary effects remain the same. Cole is kept at a distance from them, always reminded of being the "other", whether criminally or mentally divergent. On television, cartoons and animal testing are shown in the asylum and the Woody Woodpecker "time tunnel" episode comes on in the motel. Gilliam also depicts a past that looks just as dilapidated as the future and makes references to Hitchcock's Vertigo, which also involves questions of time and memory.

"If there are any drawbacks to this excellent psychodrama, it is in a script that seems to hold back from taking its delusions full force, keeping in check its scrutiny of modern civilization just below the point of attack. To be sure, the story by David Webb Peoples (the mind behind Unforgiven and co-writer of Blade Runner) and Janet Peoples is well written and conveys much to think about, but seems to only touch on the surface of its ideas. Inspired by Chris Marker's 1962 short film "La jetée," the dialogue, especially Jeffrey Goines' [Brad Pitt] comments on society, is thought-provoking and suggestive, but delivered as disjointed Foucauldian thoughts that could've delved deeper. However, it could just as easily be argued that the randomness is deliberate and adds to the film's mind-puzzling narrative. Nevertheless, the script's strongest feature is the shocking denouement, giving way to concerns about determinism, where an individual is aware of her/his condition but incapable of doing anything about it."

In spite of these minor flaws, Terry Gilliam's 12 Monkeys remains a well-crafted sci-fi flick that appeals to the intelligence of its audience. It is a darkly surreal and inspired time-travel adventure commenting on modernity — a feverishly rambling tale about consumerism and technology. The film is a wonderfully grim and chaotic vision exploring the fine line between madness and sanity, determinism, self-destruction, and the lack of communication.

Vital Disc Stats: The Ultra HD Blu-ray
Courtesy of Arrow Video, Terry Gilliam's 12 Monkeys time-travels home as a single-disc 4K Ultra HD edition. Housed in their standard black keepcase with reversible cover art and a slipcover, the Region-free, UHD100 disc sits comfortably opposite a 44-page booklet, featuring a pair of insightful essays by Nathan Rabin and Ian Christie, along with color photos and a brief explanation about the restoration. There are no trailers or promos before being greeted by a familiar menu screen with full-motion clips, music playing in the background and the usual options at the bottom left corner of the screen. 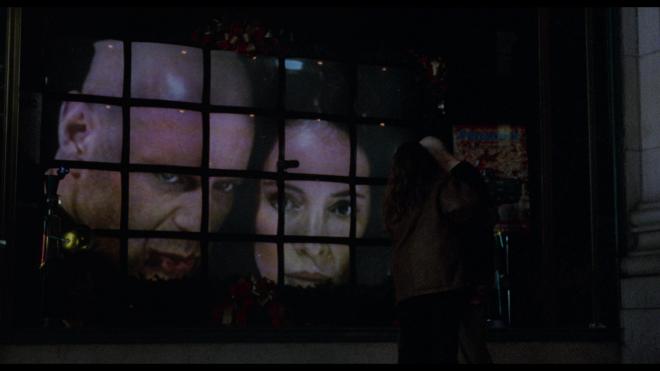 The cult sci-fi classic travels back to home theaters and infects Ultra HD with an absolutely stunning and magnificent HEVC H.265 encode, handily surpassing the 2009 Universal Studios Blu-ray release while offering a notable upgrade over the 2018 Arrow Video edition. Unfortunately, what could have been a reference-quality transfer is sadly hindered by one notable defect to be called out. The accompanying booklet is written in such a way to imply that the encode was struck from a new remaster of the original 35mm camera negatives, but that does not appear to be the case.

For all intents and purposes, this is actually coming from the same 4K digital intermediate used for that aforementioned Arrow release, which was approved by director Terry Gilliam, because the same disc errors seen on that BD is also on display on this UHD disc. At approximately around the 00:40:52, we can distinctly see that Willis's dialogue while being interviewed by the scientists is slightly out of sync. Immediately after, a few shots from 00:41:13 - 00:41:25 are strangely repeated ten seconds earlier at 00:41:00 - 00:41:12, creating an ironically odd feeling of déjà vu albeit unintentionally, of course. Admittedly, it is easy to miss at first while enjoying the entire sequence, but fans who are very familiar with the film will surely notice the bizarre error.

This is disappointing because the native 4K transfer, otherwise, is frankly remarkable and downright marvelous given the film's history on home video and the heavily stylized photography of Roger Pratt. Shot almost entirely with a mix of diffusion filters and stockings over the lens depending on the scene, the video comes with an intentionally hazy, dreamy gaze where contrast balance is noticeably subdued, furnishing the visuals with a downcast and somber appearance. This also gives specular highlights a slight blooming effect around the faces, like in Cole's dreams at the airport, or a haloing glow around a few characters, particularly that of Stowe's Kathryn. Notwithstanding, those highlights are tighter and crisper with a brilliant radiance, and the 1.85:1 image is strikingly razor-sharp throughout, aside from the few optical special effects, which is to be expected and easily forgivable. Individual hairs, the stitching and fabric of the costumes and the small architectural features of the stage design are more discrete while the lettering in various media is more legible and definite. We can also better make out the fine lines, wrinkles, pores and negligible blemishes on the faces of the entire cast.

With a better refined and consistently stable grain structure, the Dolby Vision HDR presentation supplies the picture with richer, more accurate blacks although a few moments can seem a tad murky due to the aforementioned use of filters. Nevertheless, shadow details are better resolved with stronger visibility in the darker corners of the frame. Despite much of the photography seeming dreary and favoring a more greyish bleak appeal, the overall color palette arguably benefits the most thanks to the richly-saturated primaries, especially the sumptuous, animated reds ranging from the deep garnet of blood to the vibrant crimson in some articles of clothing. Secondary hues likewise enjoy an appreciable boost, bathing the dystopian future in a dynamic glow of warm golden yellows and marigold earth tones while the past is contrasted with shades of steely blues and gloomy teals. Meanwhile, facial complexions come with a more appealing, peachy-red tone.

In the end, this a truly remarkable upgrade over its HD SDR counterparts, but one glaringly disappointing error brings this 4K presentation down just shy of reference quality. (Dolby Vision HDR Video Rating: 92/100)

[UPDATE: On 9 May 2022, Arrow Video issued a statement via their Twitter account regarding the video error noted in our review and hinting at a replacement UHD disc sometime in the future. The following image is from their original tweet.] 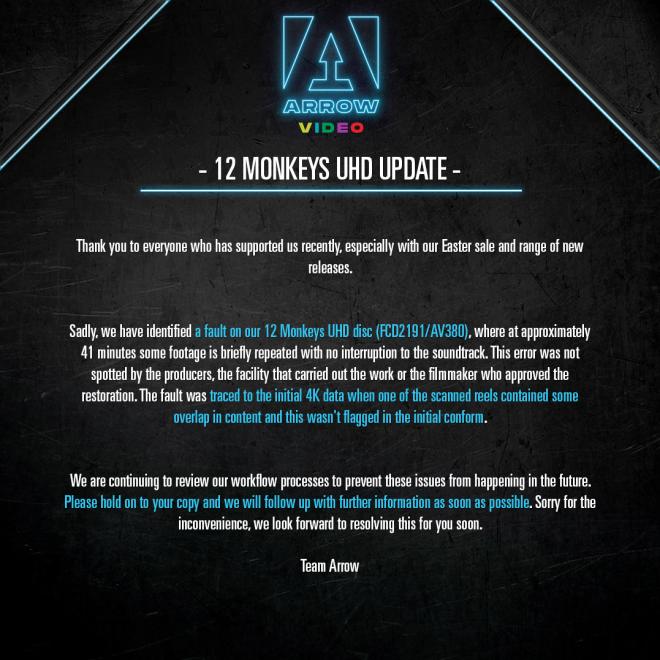 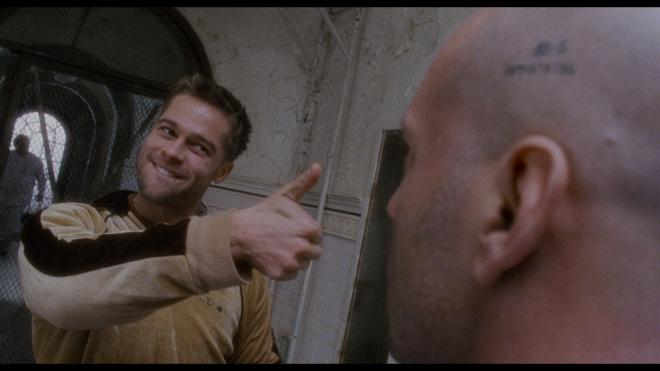 The Gilliam sci-fi favorite saves the future once again with the same DTS-HD Master Audio 5.1 and uncompressed PCM 2.0 stereo soundtracks enjoyed on the Arrow Video Blu-ray edition. Nevertheless, the front-heavy design exhibits a clean mid-range with plenty of intelligible definition and good clarity, providing an appreciable sense of presence that feels broad. It's nothing particularly dynamic, but it nonetheless supplies Paul Buckmaster's score with strong acoustical details and discernable distinction. Dialogue is also strong and intelligible at all times while the low-end provides some welcomed weight and punch to the music and on-screen action. A few key sequences take advantage of the surrounds with discrete effects moving into the sides and between the three front channels, generating some nice moments of atmosphere. These same moments come alive when applying the receivers' Auro-3D up-mixing functionality, convincingly extending the soundfield into the top heights with various atmospherics and creating a more pleasant, surprisingly natural listening environment. (Audio Rating: 84/100) 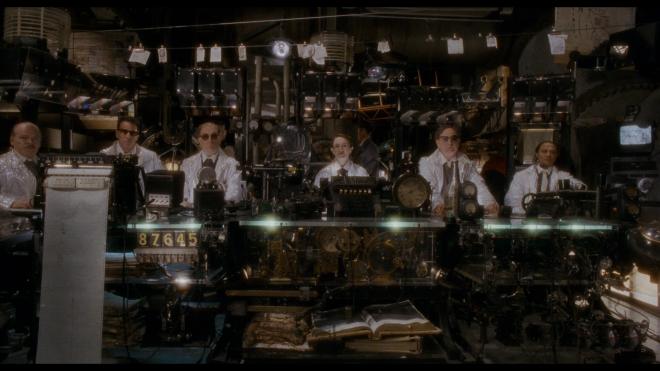 For this UHD edition, Arrow Video ports over the same set of supplements as their previous Blu-ray release. 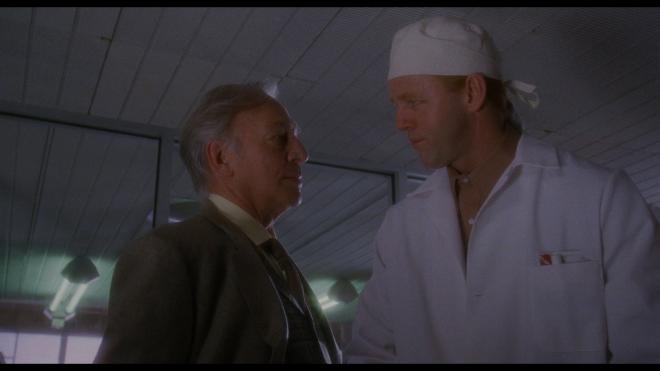 With Bruce Willis and Brad Pitt offering some of their best performances, Terry Gilliam's 12 Monkeys remains just as entertaining and thought-provoking as ever, thanks to a complex plot that seems to change with each viewing. Courtesy of Arrow Video, the cult sci-fi classic saves the future once again on 4K Ultra HD with a stunningly magnificent Dolby Vision HDR presentation that would have easily ranked as reference-quality if not for one significant video error. Nevertheless, the gorgeous video is accompanied by the same pair of lossless soundtracks and the same set of bonus material as Arrow's previous Blu-ray release. Overall, and in spite of the aforementioned error, this UHD edition still scores enough to make a recommended addition to the 4K library albeit with some reluctance.