Al Reinert’s thrilling documentary For All Mankind soars to 4K Ultra HD Blu-ray from The Criterion Collection. This amazing documentary chronicles NASA’s Apollo program distilling multiple missions and crewmen and their journeys beyond our planet and to the moon in a single experience. The Criterion Collection upgrades their already excellent Blu-ray experience with a gorgeous native 4K Dolby Vision transfer that heightens the beautiful visual experience. With a nice collection of bonus features, this is an essential piece of the collection. Highly Recommended

The space race wasn’t launched with the first rockets or Sputnik, it was launched when President John F. Kennedy stood before the country and declared we were going to the moon. Not for the glory of the United States, but for the glory of all mankind. Using the original 16mm footage shot by NASA, director Al Reinert constructs pieces from NASA’s nine key manned missions beginning with Apollo 8 to chronicle man’s journey to the moon. Multiple men on the ground and 24 men in a tiny space capsule are featured throughout this incredible journey to Earth’s closest celestial neighbor. 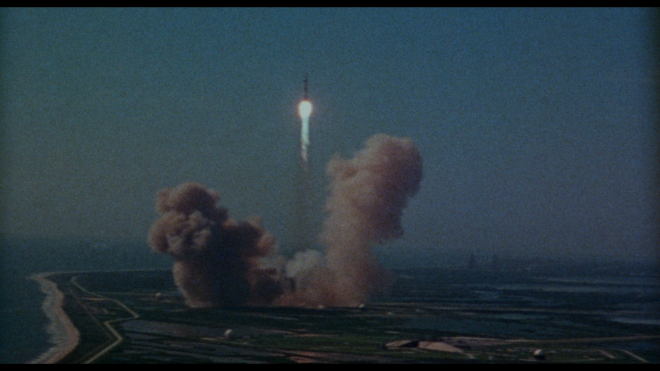 Now to be upfront, as much as I like watching documentaries, I rarely can rewatch them. Once I’ve seen a doc - no matter how amazing - I’m usually inured to the experience that I just don’t connect with it again. For example, I love Errol Morris films - especially The Fog of War, but I can’t for the life of me watch them again without disconnecting at some point. It’s not that I don’t want to give them another go, but once I’ve digested the information once, I just can’t do it twice with the same enthusiasm. That’s thankfully not the case with For All Mankind.

While For All Mankind technically falls as a documentary, it’s more of an experience than a piece of factual information presented to an audience. You hear the voices of the men on the ground at mission control, the men orbiting our little blue planet, and those few blessed enough to walk on the moon. Coupled with a hypnotic score by Brian Eno, the film is a dizzyingly exhilarating experience. Using some then never before seen footage from NASA, Director Al Reinert deftly weaves years of space travel into one single 80-minute journey. And every frame is a thrilling and inspirational ride. 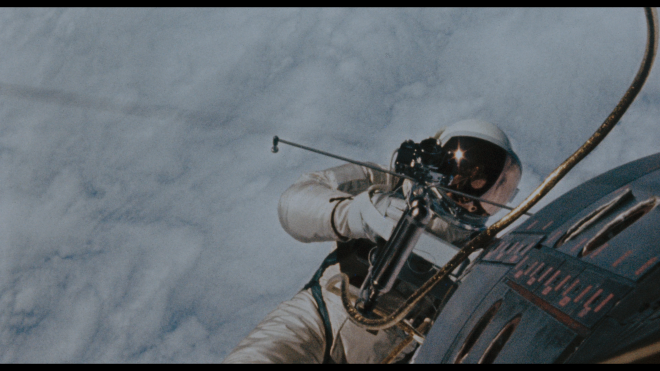 Now, I wasn’t one of those kids who ever dreamed of becoming an astronaut but I loved the possibilities of space exploration. And I love revisiting this documentary. I’ve loved it since I was about in the fourth grade when we got to see it in school on my tech teacher’s state-of-the-art LaserDisc player. It’s not one I often go back to, but whenever I do it captures my full attention. I’ll probably never get to leave this little world of ours and float around (not without it getting a whole lot cheaper at least), but For All Mankind is the kind of movie that lets you dream what it’d be like to go up there. This isn’t a procedural documentary but rather a dreamlike journey and you’re along for the ride.

Vital Disc Stats: The 4K Ultra HD Blu-ray
For All Mankind lands on 4K Ultra HD Blu-ray from The Criterion Collection in a two-disc 4K UHD + Blu-ray set. Housed in a standard clear keepcase with spine number #54, the 4K disc is pressed on a BD-66 disc with the 1080p presentation earning a Region A BD-50 disc. The discs load to an animated main menu with Criterion’s standard navigation menu structure. Note: the included 1080p Blu-ray has not been remastered to include both aspect ratios included on the 4K disc. It is the same disc as the 2009 Blu-ray. 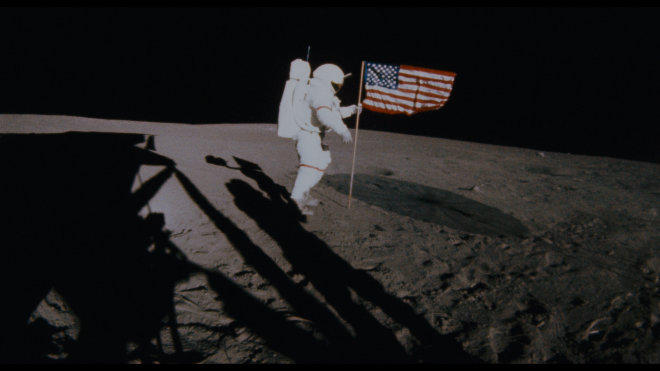 For All Mankind comes to 4K Ultra HD Blu-ray offering Dolby Vision HDR (and HDR10) presentations of the film in both the original source 16mm footage 1.33:1 aspect ratio and the film’s 1.85:1 theatrical aspect ratio. Right off the launch pad - both presentations are amazing and given the source elements Reinert had to work with, this is a beautiful image offering crisp details. Now like most films sourced from 16mm, film grain is going to obviously be heavier than your average 35mm show but that doesn’t diminish the experience any. The rawness of the footage gives the documentary a feeling of genuine urgency. And depending on the footage used at any given time, details, softness, and the heaviness of the film grain will fluctuate. 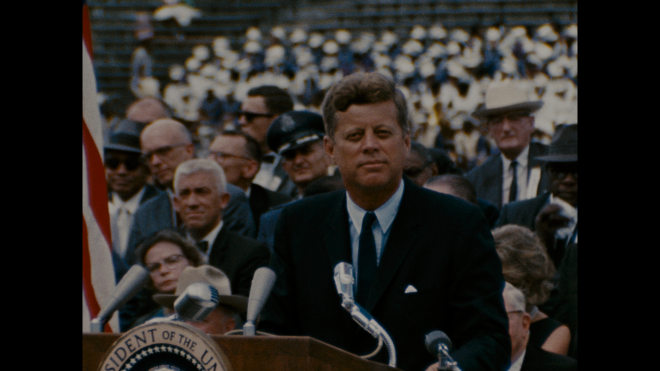 The Dolby Vision HDR grading isn’t overly heavy - so you’re not going to get blasted primaries or anything like that. Instead, it’s been judiciously applied to give colors some added nuance, stabilize some of those harsh bright whites we saw in past releases, and heighten shadows and the deep inky black void of space. But with that, some gorgeous contrasting images come to life. The first time you see the reverse shot of earth in the far distance as the crew gets closer to the moon; it’s quite the sight to see.

As far as which aspect ratio I prefer - I have to side with the 1.33:1 since that’s pretty much how I’ve seen this film since the very first viewing. The 1.85:1 is great in its own right and looks marvelous, but seeing it that way was a little jarring and took some getting used to. Again both experiences are excellent and I’m glad to see Criterion go the extra mile to deliver them for this new release.

The included 1080p Blu-ray has not been remastered to include both aspect ratios. Again, it is the same disc from 2009. 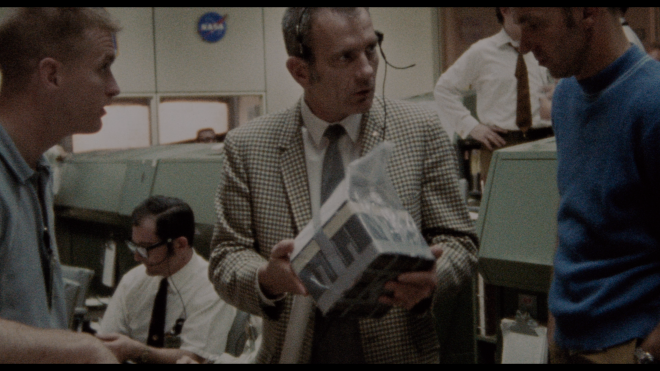 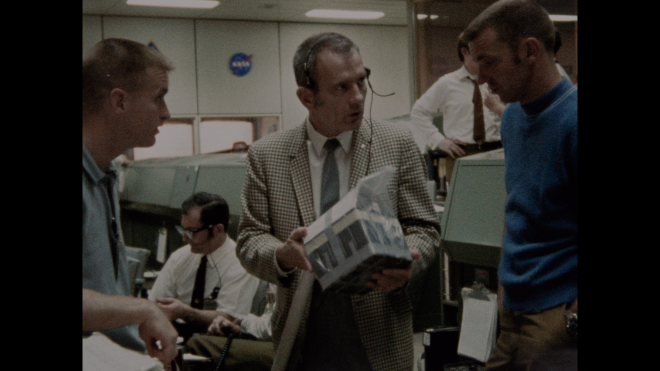 This release of For All Mankind comes with what sounds like the same DTS-HD MA 5.1 audio mix as the 2009 disc. Flipping between them I couldn’t notice any difference. All around this is an effective mix but it doesn’t blow your hair back either. The launch sequence and a few scattered moments of chaos like the brief slip through the Apollo 13 footage are the most aggressive with full usage of the surround soundscape. Much of the time the mix is fairly front-focused with activity in the sides and only sparse hits in the rears. And because sound effects and dialog are sourced from a variety of sources, voices can either sound like the person is sitting right next to you or talking to you through a tin can on a string. Thankfully, even when the dialog is a little weak it isn’t unintelligible to the point I needed to flip on subtitles. But then this is probably the twelfth time I’ve seen this film so that could just be familiarity. All in all a great mix. 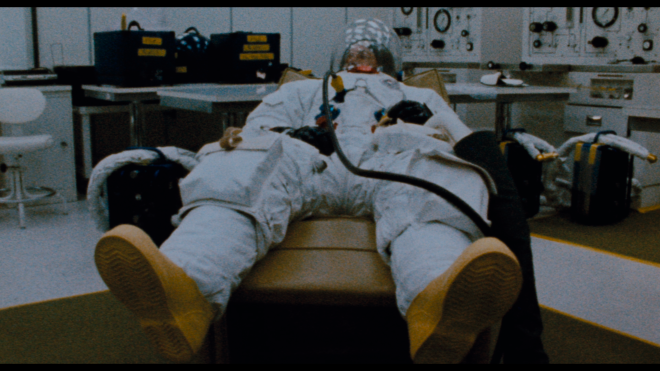 Since Criterion has had this film in their catalog since the LaserDisc days, all of the previous bonus features are of course included with this release. The 2009 disc is identical, so nothing new in the stew. But what’s nice is they did include the Audio Commentary on the 4K disc so if that’s the way you want to fully experience what this set has to offer you don’t need to watch the film in 1080p for the excellent commentary track. 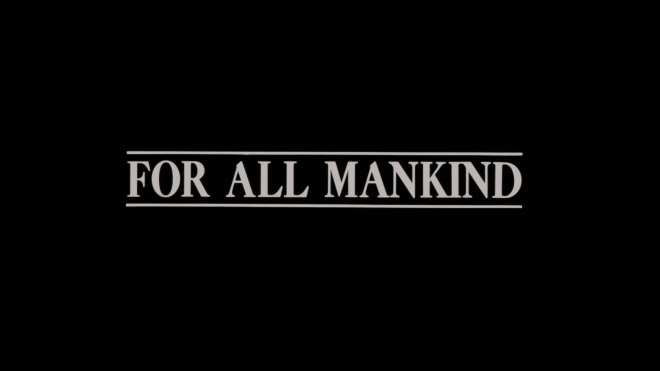 For All Mankind is just a beautiful piece of filmmaking. In the traditional sense of a documentary it’s not the most informative as it eschews the procedural aspects of most docs to give the audience a unique experience. The film is a journey to the moon using the footage of several missions and crewmen to show one of the greatest accomplishments in human history. If you’ve never seen it or haven’t given it another round since you saw it in school or the theater, it’s time to climb back into the cockpit and give this amazing film another launch. The Criterion Collection does an amazing job with the 4K Ultra HD Blu-ray release of For All Mankind delivering an excellent Dolby Vision transfer in two aspect ratios carrying over the same solid audio mix and a fine assortment of bonus features including the excellent Al Reinert and Eugene Cernan audio commentary. Highly Recommended