When the bad guys don’t stay dead, the fastest, funniest cops in town will have to crack the case - or die trying. Treat Williams and Joe Piscopo will go to war against Vincent Price’s army of the undead in Dead Heat - the perfect hybrid of buddy-cop action and horror-comedy. Masters of schlock and genre films Vinegar Syndrome raises this cult classic from the dead to deliver a genuinely excellent 4K Ultra HD Blu-ray with a clean native 4K HDR10 transfer and audio, and some great bonus features. Personally, this is a Must-Own for this fan, but if you’re a newcomer I’d be shocked if anyone doesn’t find this flick entertaining - Highly Recommended

"Why aren't these guys dead? We've hit them about fifty times each!"
"Maybe they're just flesh wounds?"

Officers Roger Mortis (Treat Williams) and Doug Bigelow (Joe Piscopo) are the best at what they do - namely breaking all the rules and pissing off their captain. When a spree of smash and grab robberies pin the cops against crooks that can take a dozen shots and keep on ticking, Roger and Doug find themselves in a tricky spot. Things get even more complicated when Roger is killed on the job and then resurrected at a mysterious research facility. Now the wise-cracking partners and best friends have just a few hours to crack the case before Roger’s body dissolves into a useless puddle of goo.

There are great Buddy Cop action movies, 48 Hrs., Lethal Weapon, The Nice Guys. There are great Horror Comedies, Return of the Living Dead, Bride of Frankenstein, Evil Dead 2. But how many Buddy Cop Horror Comedies do you know? The only one that I can think of - at least that’s any good or worth remembering - is Dead Heat. Director Mark Goldblat and writer Terry Black pull together the perfect blend of action, comedy, and zombie-fueled creature horrors.

Starring Treat Williams as the straight-laced Roger Mortis and Joe Piscopo as the wisecracking Doug Bigelow. Together they’re the best - and worst - cops in town. Their natural chemistry keeps the laughs coming with some great one-liners and comedic timing. Williams gets to play straight man while Piscopo falls back on his natural wit. As fast as the jokes fly, they never feel out of place or overcooked. The movie already had a goofy concept and these guys lean into it with ease. Darren McGavin, Robert Picardo, and Mel Stewart also make fun appearances. 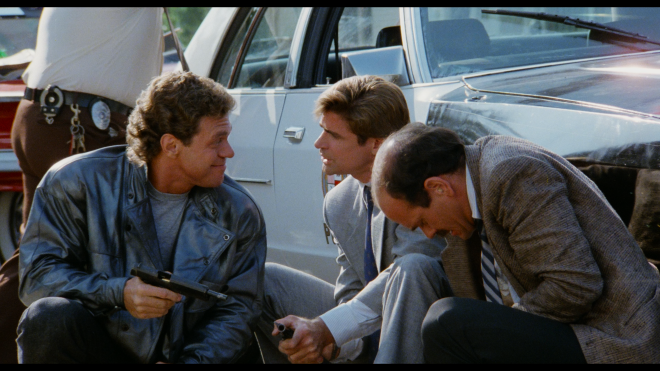 I also love Dead Heat’s take on Zombies. A horror sub-genre that’s been beaten to death and repeatedly resurrected and beaten again, Zombies tend to be pretty one-note recently deceased corpses. Here we’re given a pretty damn inventive means of resurrection thanks to a mad scientist played by Vincent Price. Price may not get a lot of time here, but the elder statesman of horror is a game participant and lends some more credibility to the proceedings. On top of that, the Zombies of this movie aren’t exactly well preserved. Like an old steak left to the elements, they rot. A lot of the fun of this film is Roger dealing with his constantly changing appearance and trying not to horrify people.

Sure, Dead Heat probably isn’t the best artifact of the 80s, but it’s a unique entry as a perfect hybrid of horror, comedy, and buddy cop action. The cast is great. The jokes are funny. And the creature and makeup effects are delightfully gnarly. It’d been a couple of years since I last dove in on this film and it’s always entertaining and holds up for repeat viewings. If you've got friends over for a flick with some pizza and beer, Dead Heat is a great title to headline the night! 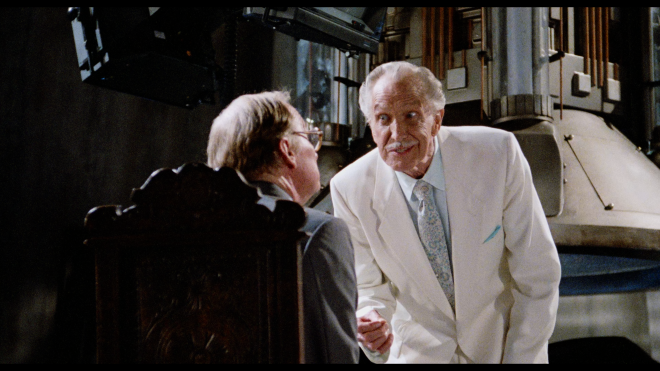 Vital Disc Stats: The 4K Ultra HD Blu-ray
Dead Heat once again rises from the home video graveyard for a brand new 2-Disc 4K Ultra HD Blu-ray release from Vinegar Syndrome. The film is pressed on a BD-66 disc with the 1080p version and bonus features lined up on a Region Free BD-50 disc. Both discs are housed in a standard study case with reversible insert artwork and if you order directly from Vinegar Syndrome, an exclusive custom o-card slipcover. Both discs load to animated main menus with traditional navigation options.

If you want the slipcover - order direct from Vinegar Syndrome 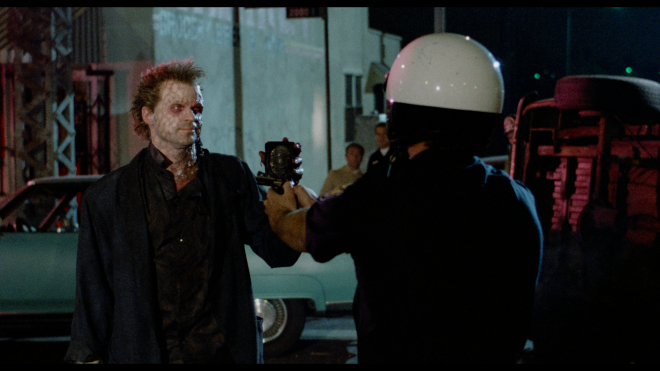 I gotta say I’m loving the boutique labels these days. Vinegar Syndrome once again takes a semi-obscure genre classic and gives it the A+ treatment. This native 4K 1.85:1 2160p HDR10 transfer makes the film look like it was shot yesterday. And since all of those atrocious 80s fashions are coming back it actually could look like it was shot yesterday! Source elements are in excellent shape with only slight minuscule speckling to report. Details are strong allowing you to fully appreciate fine facial features and clothing textures, production design, and the delightfully gnarly zombie makeup. Film grain is apparent and organic looking, giving the image a welcome cinematic feel. 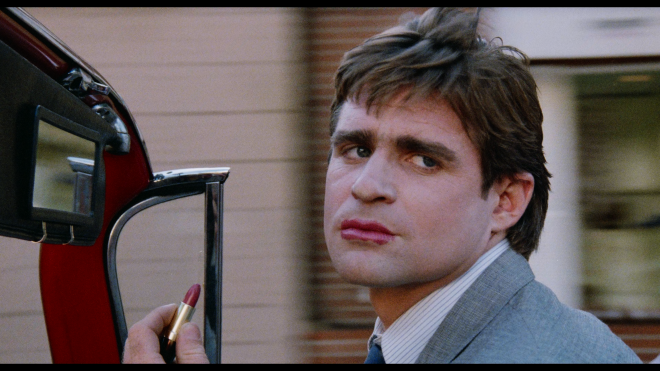 HDR10 has been well applied here, allowing for primary colors to shine nicely. Reds obviously get a lot of play with all of the blood effects but skin tones never appear too pinkish. Yellows and Blues also get their time in the L.A. sun. Black levels are nice and deep, approaching that desired inky shade without dipping into crush. Whites are overall crisp and clean without issue, but there are a couple of scenes where some slight blooming does appear. Thankfully that's very brief and not a serious problem. Otherwise, this is a terrific transfer for a nearly 35-year-old cult classic. 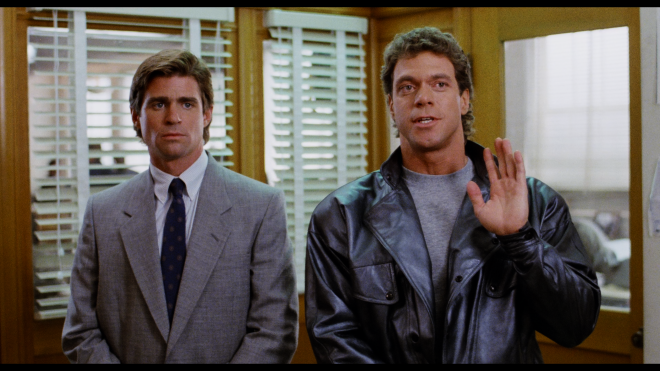 To cap the A/V presentation, this release of Dead Heat comes with a strong DTS-HD MA 2.0 audio mix. For the life of me I can’t locate my Image Blu-ray release from 2011 for a direct comparison but just going from memory this new mix is far more active and engaging. I remember that 2011 disc just always feeling hollow. Here you can fully appreciate dialog exchanges - which is important for the numerous jokes and gags - while action sequences punch nicely with Ernest Troost's score backing everything up. The track is free of any hiss or age-related issues. 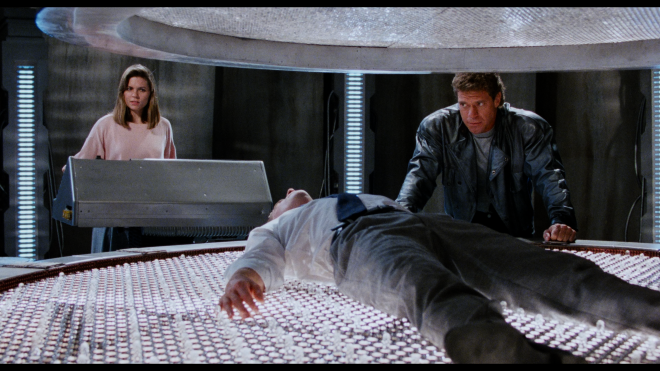 Not to leave anything behind, this release comes packed with a nice variety of new and archival bonus features. The old commentary track is a great listen. Sadly we don’t get any new interviews with Piscopo or Williams; a new audio commentary with the pair would have been a blast! But all of the crew interviews and the new interview with director Mark Goldblatt are worthwhile. 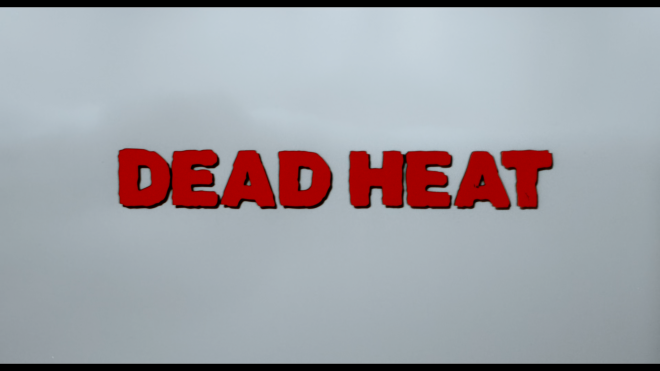 Dead Heat might not be the greatest movie ever made, but it is the greatest Buddy Cop Horror Comedy! With Treat Williams playing the straight man (and zombie) to Joe Piscopo laying out the jokes, the film is a riot from start to finish with plenty of action and gnarly fun makeup effects. Also - Vincent Price pops up so you know it’s gotta be worth checking out! Vinegar Syndrome gives this cult classic new life on 4K Ultra HD Blu-ray with a beautifully restored HDR10 transfer, terrific audio, and some great bonus features to pick through. For the die-hard fans of this flick, this is an easy one to call a Must Own - but for newcomers, it’s Highly Recommended.