Master of thought-provoking and stomach-churning science fiction and body horror films, David Cronenberg directs the devastatingly tight and tense crime thriller Eastern Promises. Starring Viggo Mortensen and Naomi Watts, the film takes a look at the repercussions of human trafficking in London’s Russian mafia. It’s a hell of a film that still hits hard fifteen years after its run in theaters. Now Kino Lorber Studio Classics is delivering an excellent 4K Ultra HD Blu-ray release with a beautifully dour Dolby Vision HDR transfer, a terrific audio mix, and a smattering of new and archival bonus features. All around a worthwhile upgrade Highly Recommended

A fourteen-year-old girl wanders into a London pharmacy bleeding and riddled with track marks. Moments later she’s dying in an emergency room operating theater as her daughter is born. The midwife on hand, Anna (Naomi Watts) finds a diary written in Russian and a business card to a Russian restaurant in the girl’s things. As she becomes attached to the newborn baby girl, Anna seeks to find answers to the girl’s identity and where she’s from. But as she digs deeper she begins to pick at the strings of the London Russian Mafia, a mysterious chauffeur called Nikolai (Viggo Mortensen) looms in the shadows offering to help - but can he be trusted? 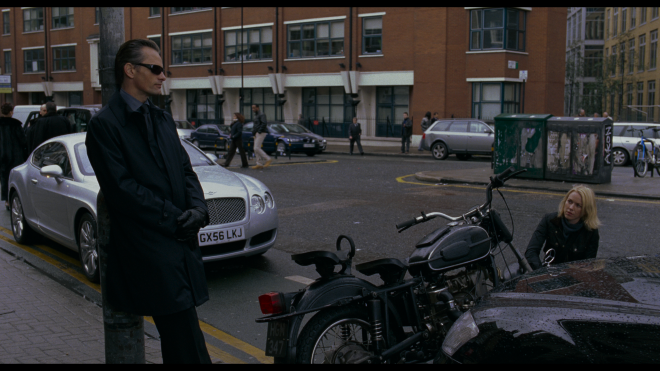 David Cronenberg spent the better part of his career building up a reputation for thought-provoking science fiction and body horror films that weren’t for the squeamish. At the turn of the millennium, something flipped as the auteur of viscera cinema began to explore more traditional thrillers like Spider and A History of Violence in between acting gigs in films like Jason X. In 2007 he hit a career highpoint with the Russian gangster film Eastern Promises that unflinchingly looks at the toll of human trafficking.

On the surface, Eastern Promises is your conventional crime thriller. An innocent woman unknowingly discovers evidence of organized crime that puts her and her family’s lives in danger. Thanks to the great turn from Naomi Watts, the full-bodied performance of Viggo Mortensen, and Stephen Knight's sharp screenplay, this simple plot becomes a lot more than the average thriller. With the disembodied voice of Tatiana through her diary, she becomes the most important character of the film without hardly any screen time. It’s uncompromising and brutal and as I learned in 2007, not a movie to take your new girlfriend to see in the theater. 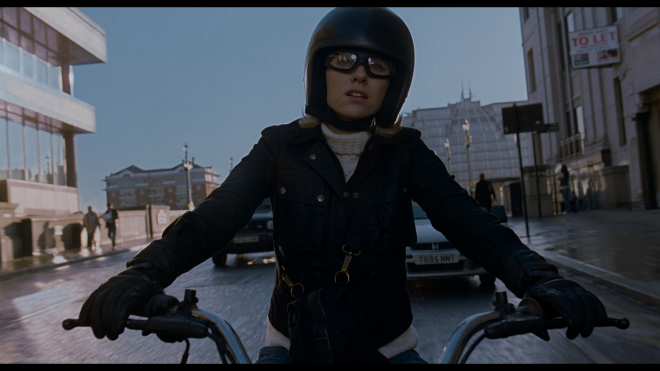 And speaking of uncompromising and brutal, the first few minutes of the film set the stage for much of what is to come. Just because David Cronenberg may have moved away from body horror and surrealistic science fiction, doesn’t mean there isn’t room for horrifying violence. If Mortensen’s performance wasn’t enough, this film features what stands to this day as one of the most visceral and shocking fight sequences which more than cements his standing as one of his generation’s most talented performers. Not to say Naomi Watts doesn’t have her moments to shine, but she’s often upstaged when it gets right down to it. I also have to tip my hat to Armin Mueller-Stahl as the seemingly kindhearted Russian patriarch Semyon and Vincent Cassel for his turn as the ineffectual son Kirill.

With a career that’s spanned roughly 50 years now, it’s exciting to see that Cronenberg is back behind the camera again for his upcoming Crimes of the Future. Of the last twenty years, I have had a hard time picking my favorite Cronenberg film but Eastern Promises ranks high on the list. A History of Violence is a terrific thriller, but as an adaptation of the graphic novel, it only has a passing resemblance. I enjoyed Cosmopolis and Maps to the Stars well enough but they didn’t quite have the punch I'd hoped for. A Dangerous Method was an interesting film but for a movie about such dynamic personalities as Jung, Freud, and Spielrein it felt oddly cold and clinical. Spider can be frustrating at times but Ralph Finnes was amazing in it and it’s well worth checking out if you haven’t gone the distance. That’s quite the range of films in just a couple of decades covering a whole mess of topics and themes. I guess you can call it a mark of how effective a storyteller he is that even a lesser Cronenberg film is always worth revisiting. 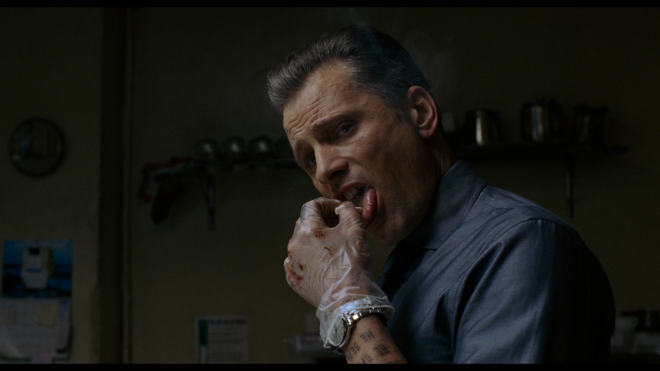 Vital Disc Stats: The 4K Ultra HD Blu-ray
Eastern Promises makes a welcome upgrade to 4K Ultra HD Blu-ray in a new two-disc set from Kino Lorber Studio Classics. The 4K presentation is pressed on a BD-100 disc, with the 1080p copy on a Region A BD-50 disc. Both discs are housed in a standard sturdy black case with identical slipcover artwork. Both discs load to static image main menus with basic navigation options. All bonus features are on the 1080p disc. 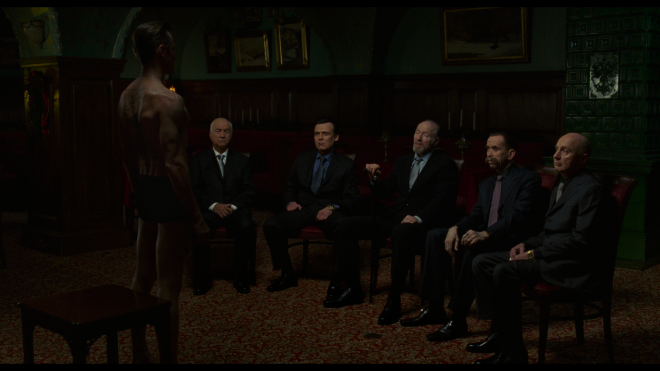 Reportedly sourced from a new Dolby Vision HDR master approved and color graded by Cinematographer Peter Suschitzky, Eastern Promises makes for a beautifully dour 4K Ultra HD Blu-ray presentation. This isn’t exactly the cheeriest of films but it has this deceptively homely appearance thanks to its Christmas setting. The most immediate difference I felt was the sense of three-dimensional depth over the old 2008 Blu-ray. Details are excellent allowing you to fully appreciate production design work, costuming, and some particularly gnarly scenes not for the squeamish. Details in Nikolai’s numerous tattoos are also much clearer than I’d ever noticed them in his initiation scene. Film grain is healthy and cinematic throughout without any notable signs of smoothing or edge enhancement to speak of. 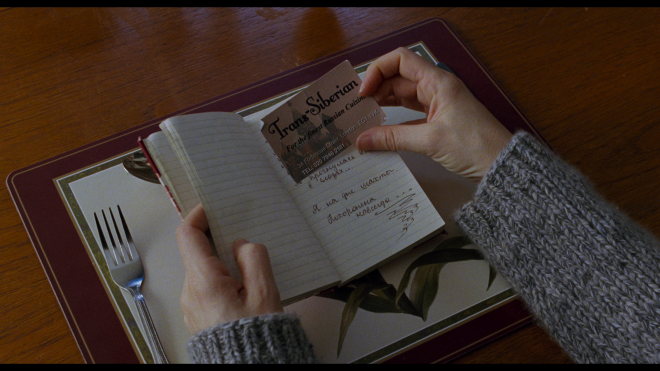 Color timing isn’t dramatically different than the old Blu-ray, but with Dolby Vision HDR (and HDR10), there’s more nuance in the color spectrum, with deeper inky blacks, and crisp whites. This is a generally drab film with lots of shadows and I really loved how these enhancements play out now with specific scenes. In contrast, it makes the bold white light of the bath house fight all the more shocking since there’s no hiding the violence anywhere. While the film may be drab, primaries get plenty of time to shine. Blue hospital scrubs, various Christmas decorations, and plenty of blood have their moments. Specular highlights also pop nicely for a genuinely beautiful image. 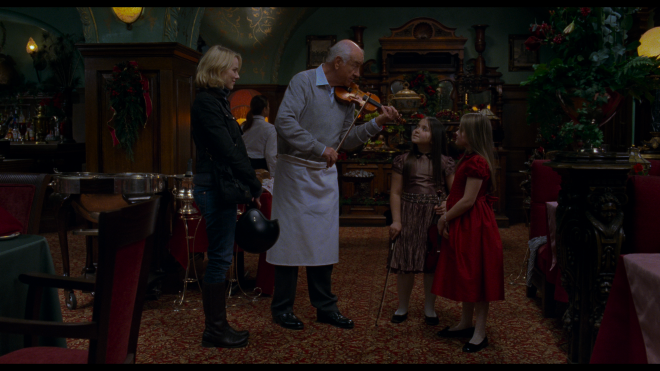 This release of Eastern Promises comes with two audio options - the default DTS-HD MA 5.1 track and what sounds like a down-mixed DTS-HD MA 2.0. The 5.1 mix is absolutely the best way to roll regardless of setup. While the 2.0 works well enough, there’s just no call for it, the track just feels oddly constrained and tight where the 5.1 is nice and open with more atmospheric presence. Flipping between discs I didn’t notice any difference with the 5.1 track here and the 2008 disc - which is fine because it’s a great mix regardless. Dialog for both the 5.1 and 2.0 tracks is clean and clear without issue. Again, the 2.0 track will get the job done if you’re rolling only the most basic of audio setups, but even then I’d still stick with the default 5.1 track - it’s the suitably better fit for the film. 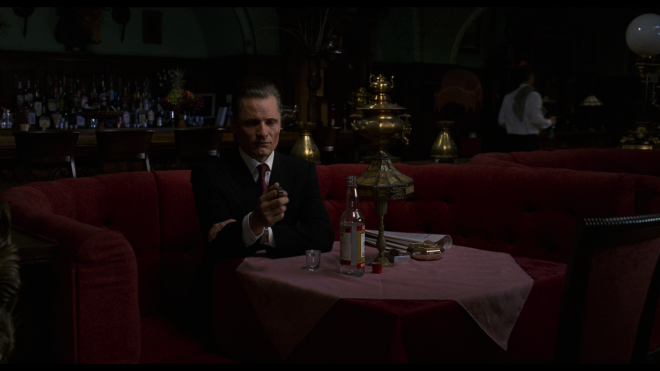 KLSC has brought over pretty much everything that was on the old Blu-ray. The lone new bonus feature is an interview with screenwriter Steven Knight about his goals for the film and what he was trying to accomplish with his screenplay. The rest is all archival materials along with the traditional gallery of trailers for other Kino Lorber Studio Classics releases. 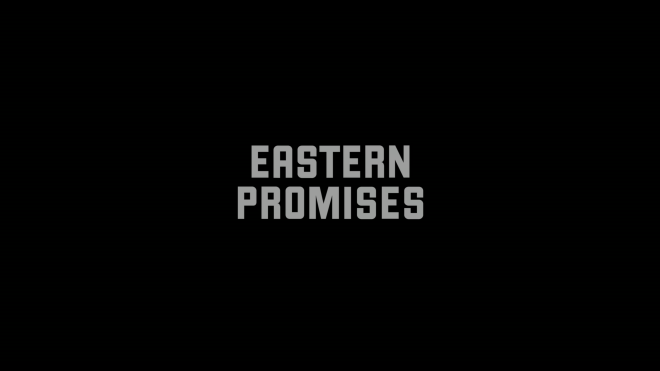 Like most of David Cronenberg’s films, Eastern Promises isn’t an easy watch. Cronenberg has never shied away from depictions of violent acts and in this film, it hits harder because it feels more real than most of his past works. Excellent performances from Viggo Mortenson and Naomi Watts with Armin Mueller-Stahl and Vincent Cassel highlight this intense crime thriller. Kino Lorber Studio Classics brings Eastern Promises to 4K Ultra HD Blu-ray with an excellent Dolby Vision HDR transfer, two audio tracks, and some nice bonus features to pick through. If you’re a fan it’s a worthy upgrade, Highly Recommended