The Sword and the Sorcerer - 4K Ultra HD Blu-ray

Like a three-bladed sword, the master of science fiction and fantasy films on meager budgets Albert Pyun launched his directorial career with The Sword and the Sorcerer. Made at the height of the 80s fantasy craze, this film combines large-scale action with magic and mysticism for a convoluted but highly enjoyable show starring Richard Lynch, Lee Horsley, and Simon MacCorkindale. The film makes its 4K Ultra HD Blu-ray debut courtesy of Scream Factory with a pleasing Dolby Vision transfer, serviceable audio, and a wealth of great bonus features. For fans of high-concept schlocky fantasy films - it doesn’t get much better than this. Recommended.

It is an age of darkness. The honorable King Richard’s kingdom is threatened by the power-hungry madman Titus Cromwell (Richard Lynch). After resurrecting and aligning himself with the diabolical demon Xusia (Richard Moll), Cromwell lays waste to Richard’s armies dethroning the king and murdering the queen. Years later, Richard’s only surviving son Talon (Lee Horsely) and his three-bladed projectile sword return to his homeland for revenge by joining a rebellion against Cromwell led by the honorable Mikah (Simon MacCorkindale) and his beautiful sister Alana (Kathleen Beller).

Give Albert Pyun $100 and he’ll get you a pretty damned decent Captain America movie. Give him $150 and you have yourself one of the better of the middle-budget sword and sandals fantasy epics of the 80s. With this specific genre subsection of 1980s movies, I feel you need to classify these releases. On the low end of the spectrum, you had Roger Corman’s daffy Deathstalker films and the two hilariously terrible Gor films. On the higher tier, you had John Borman’s Excalibur and Conan The Barbarian. Right in the middle, you get The Sword and the Sorcerer. Modestly budgeted, it stretches every penny and accomplishes a big-looking major feature with some impressive special effects and makeup. 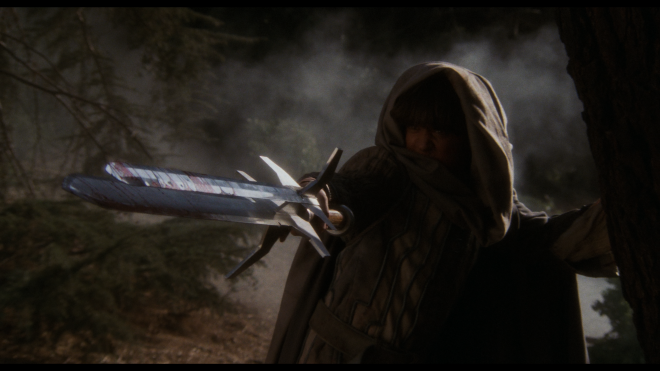 Where this film suffers is its overly ambitious plot. The film starts strong and ends well enough, but the middle section is a convoluted mess of characters with a variety of motivations and none of it is very clear. Pulling together the typical hero’s journey to avenge his parents’ deaths, we see Lee Horsely’s Talon return as an adventurous rogue with a band of mercenaries. His quest makes sense. But then you have Simon MacCorkindale’s Mikah who for some reason the people of the land believe to be the rightful heir to the throne. And then there’s the double-dealing Machelli played by George Maharis who has his own designs for the throne. And then there’s Richard Moll’s betrayed sorcerer demon Xusia who has his own designs for revenge against Cromwell and the throne. It’s a lot of “and then, and then, and then” packed into a relatively short period of time. 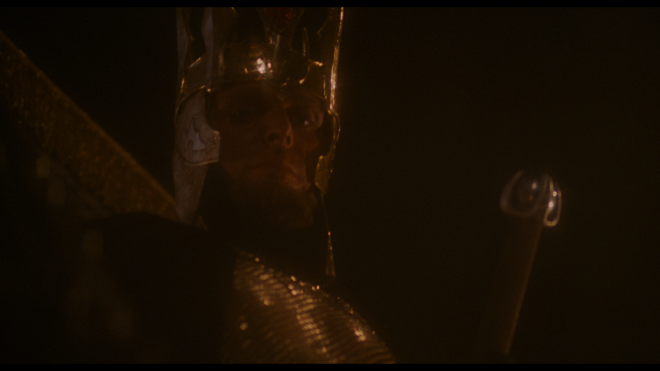 Messy plot convolutions aside, The Sword and the Sorcerer is a fun show. For Albert Pyun’s first feature, he shows his trademark assured hand at crafting impressive visuals and action sequences while getting some good performances from his cast. Richard Lynch owns the film but Lee Horsely plays well as the roguish hero. Pyun deftly manages the film’s energy making sure it’s never dull or boring even if it might get a tad confusing during the middle stretch. There’s plenty of humor (intentional or otherwise), exciting action sequences, and some pretty inventive special makeup effects - especially leading into the climactic final showdown! It’s a great party crowd pleaser and if they can’t watch it straight, the gentlemen at Rifftrax have a pretty hilarious release of it worth throwing on. High art this is not, but it’s highly entertaining. And really if you honestly look at it, it’s one of the few fantasy movies of the era that actually lives up to the amazing poster art!

Vital Disc Stats: The 4K Ultra HD Blu-ray
The Sword and the Sorcerer arrives on 4K Ultra HD Blu-ray and 1080p Blu-ray for the first time as a two-disc Collector’s Edition set from Scream Factory. The 4K version is pressed on a BD-66 disc with the 1080p version occupying a BD-50 disc. The discs are housed in a standard sturdy two-disc case with identical slipcover artwork and reversible insert artwork depicting the original theatrical poster and video art. The discs load to static image main menus with traditional navigation options. 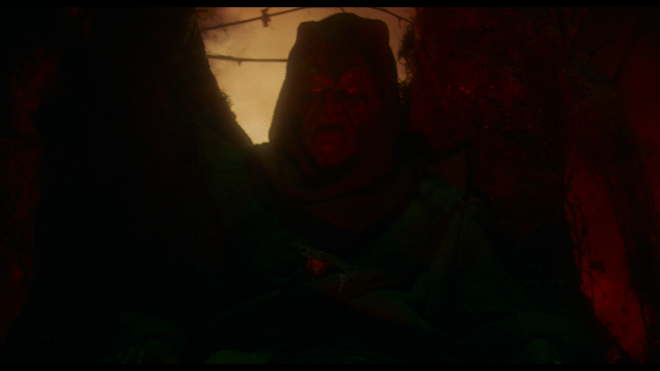 The Sword and the Sorcerer conjures its Ultra HD debut with a pretty damn impressive native 4K Dolby Vision transfer sourced from a new scan of the OCN. Elements are in overall pretty great shape - there’s some slight speckling peppered throughout but nothing severe and the worst only appears around processed optical effects and transitions. Considering the only previously available versions of this film are a now 20-year-old DVD and the SD source for Rifftrax, it’s no exaggeration that this is the best the film has ever looked on home video. Perfect, no - but damn good just the same. 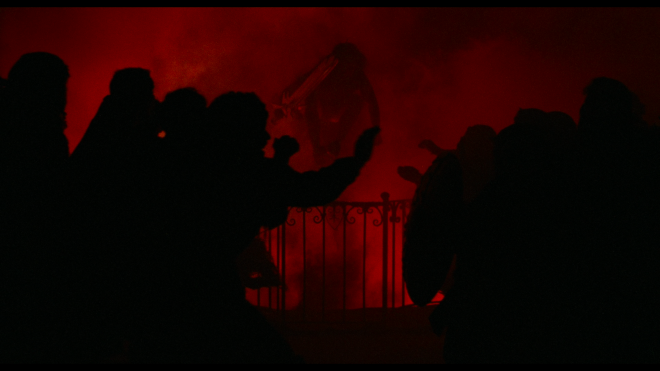 Details in the costuming, facial features, makeup effects, and the production design are all on display. Film grain is a bit thick but overall natural-looking. There are a few incidents with really bright white skies where grain doesn’t really resolve and can look quite noisy and almost “sparkle” but thankfully that’s a very brief anomaly. Most of the time, the grain is organic and cinematic. Given the fantasy elements there's a lot of soft diffused photography - but even those scenes look terrific. With all of the armor glinting in the various light sources, there are some wonderful specular highlights to appreciate as well. 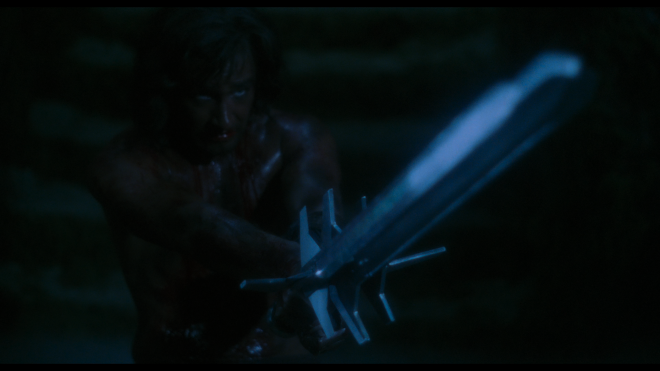 The Dolby Vision (and HDR10) pass for this film is quite good. Black levels, contrast, and primaries are all managed well. Black levels are especially pleasing; the opening resurrection of Xusia with the dark shadows and bold red lighting is a great example of how well this transfer handles itself. Reds, Blues, and Yellows get plenty of time to shine with healthy flesh tones. White clothing is crisp and clean-looking without blooming. Really outside of a couple of anomalies that are likely due to filming conditions than a transfer issue, this is a great-looking disc for a 40-year-old movie. 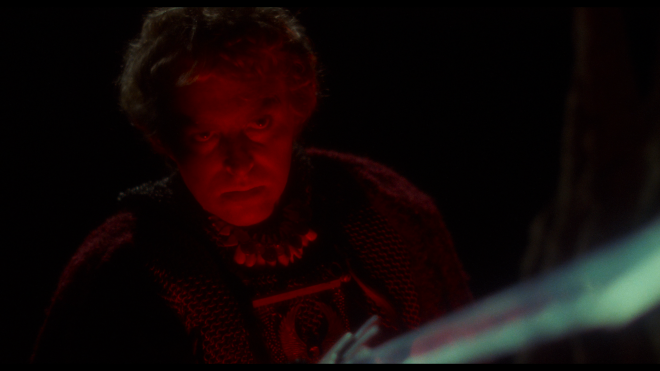 This release comes with a DTS-HD MA 2.0 and a DTS-HD MA 5.1 mix. Before the film begins, Scream Factory has a little notice about the quality of the audio:

“When getting access to the film elements for The Sword and the Sorcerer, there was almost nothing for audio. We have transferred a lone optical track for the stereo sound. There is some damage we could not fix. The 5.1 track was created by another label and has some directional errors. We think, even with some static the stereo track is the strongest audio option.”

Having watched through with both tracks I can hear Scream Factory’s point. While there is some slight static or hiss present in the DTS-HD MA 2.0 stereo mix, it’s hardly an issue to get worked up over. Most of the time you barely notice it unless you’re really listening for it. And if you're doing that then you're not paying attention to this awesome movie. 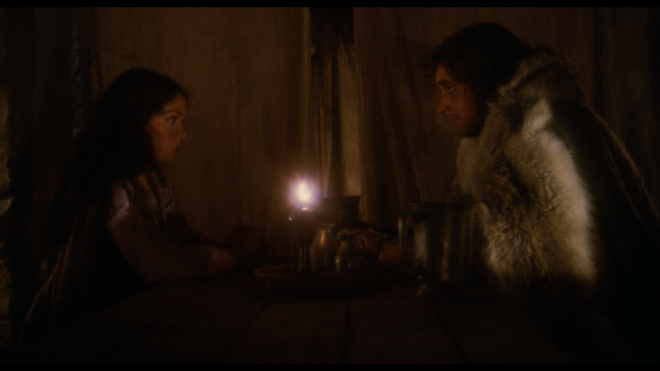 The DTS-HD MA 5.1 track offers a little more oomph in places and some more spacing, but it’s not that impressive as a surround mix. Even with a little more channel spacing it really doesn’t make much use of the wider soundscape and does actually sound a little off. That could be the directional errors they mentioned but there’s something about the dialog for this mix that just sounds rather constipated like the track is struggling to get those words out where the 2.0 mix doesn’t have that problem at all. Neither track is a demo-worthy example and it’s a shame better elements weren’t available, but rocking the 2.0 track is hardly a terrible experience and captures the action, adventure, and rousing score by David Whitaker. 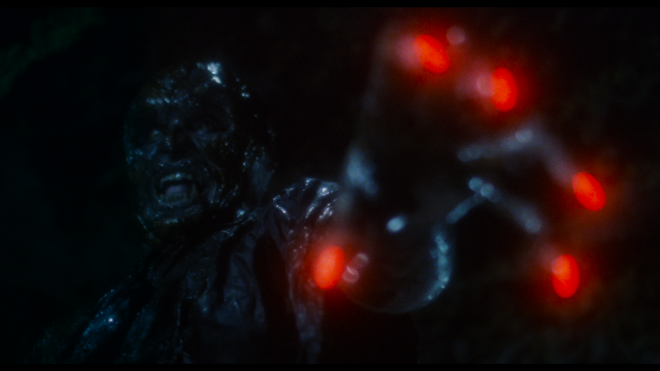 Roll up your sleeves, there's a lot of great new bonus content to dig into with this Collector's Edition. First is the excellent audio commentary with writer/director Albert Pyun moderated by John Charles. Pyun gives plenty of great detail into the genesis of the film and a number of scene-specific insights including the unfortunate death of stuntman Jack Tyree - whose tragic fall is seen early in the film. After that, we get a number of great new interviews with a variety of cast and crew along with another cool Trailers From Hell segment to round things out. There’s plenty of awesome material to pick through making this a true Collector’s Edition release from Scream Factory. 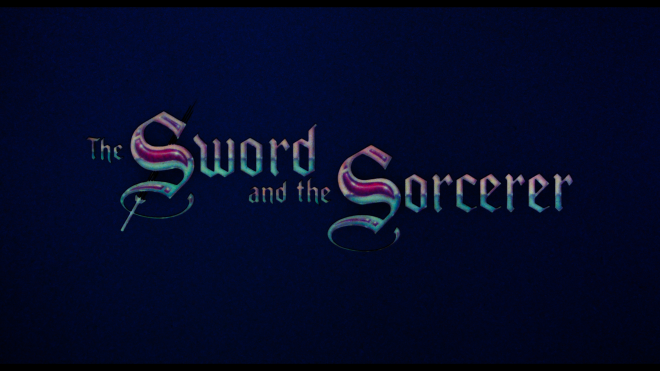 Sure, The Sword and the Sorcerer isn’t the greatest 80s fantasy film - 1982’s Conan The Barbarian would hit theaters a couple of weeks after (and I would be born a few more weeks after that) - but it’s still a very fun film. It has a lot of energy, action, humor and is just a nice easy watch to turn your brain off and enjoy. I hadn’t seen this film outside of the Rifftrax release in easily 20 years and I’d forgotten how enjoyable it was. Scream Factory delivers a genuine Collector’s Edition release sporting an impressive Dolby Vision 4K transfer, decent audio considering what they had to work with, and a true treasure trove of bonus features to pick through. If you’re a fan of the film, this is a great release for the collection Recommended