High Plains Drifter marks Clint Eastwood's first Western as star and director in a deeply nihilistic and often scary entry in the genre. Hired by a small town to protect them from a trio of killers recently released from prison, this film is filled with great performances from a who’s who of Eastwood’s stable of character actors. Kino Lorber Studio Classics takes a second shot with this title giving it a new 4k Ultra HD Blu-ray offering an excellent Dolby Vision transfer, two audio options, and a fine selection of new and archival bonus features. Highly Recommended

"Flee-bitten range bums, don't usually stop in Lago. Life here's a little too quick for 'em. Maybe you think you're fast enough to keep up with us eh?"

"A lot faster than you'll ever live to be." 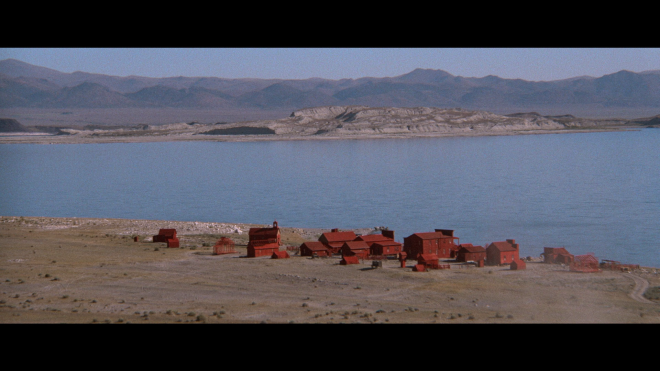 Vital Disc Stats: The 4K Ultra HD Blu-ray
High Plains Drifter rides out of the heatwaves onto a new 2-disc 4K Ultra HD Blu-ray from Kino Lorber Studio Classics. The 4K version is pressed on a BD-100 disc with the 1080p sliding onto a Region A BD-50 disc. Both discs are housed in a standard sturdy two-disc case with separate bays. The discs are not stacked on top of one another. A slipcover with identical artwork is included. The discs load to a static image main menu with standard navigation options. 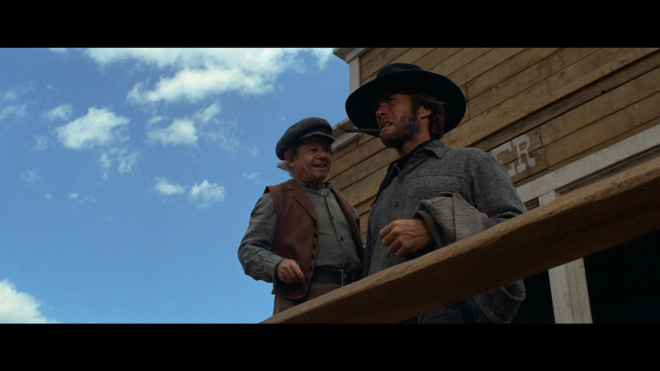 After an already very good Blu-ray release, Kino Lorber Studio Classics teams up with Universal to deliver a new and notably improved Dolby Vision 2160p 2.35:1 transfer. Reportedly this was sourced from a 4K scan of the original negative - however, they don’t indicate when that happened. Regardless this isn’t the same presentation slathered up for 4K and the included Blu-ray is sourced from this new master both discs offering refined colors without the often harsh teal push, a much more cinematically appealing grain texture, appropriate brightness levels (the older discs were a bit too dark even for this film), slightly tighter framing, and cleaner details without some of the mild edge enhancement and aliasing issues of the past transfer.

The most noticeable improvements in terms of clarity and detail I saw were in the numerous close-ups - especially on the 4K disc. Eastwood and cinematographer Bruce Surtees loved those closeup shots of faces as they fall in and out of shadows and these visuals are often stunning in 4K. Beard stubble, skin imperfections, and costume textures all get their day to shine. Middle shots are in great shape and some of the establishing shots look quite amazing. Some soft shots like the first closeup of Eastwood riding into Lago are still hazy, but they’ve always been that way. Film grain is intact and fine without appearing overly noisy or distracting. 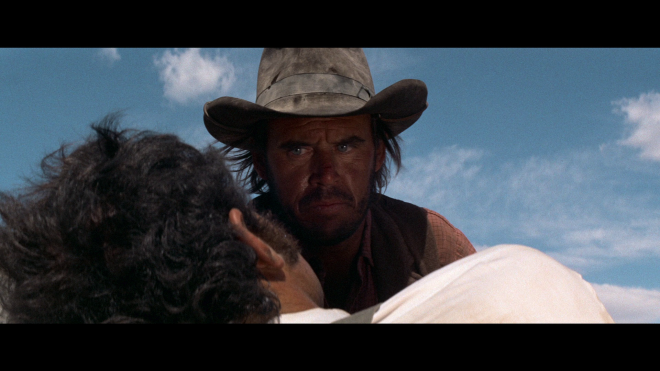 The big get here is with the Dolby Vision HDR (and HDR10) enhancement for black levels. As was the case with KLSC’s recent drop of Escape From Alcatraz on 4K, Surtees loves those dark spaces in the frame and you get some lovely shadow separation and shading. At about the three-quarter mark when Geoffrey Lewis and his pals are hiding out in the rocks, there’s this eerie highlight of Lewis’ eyes that is more enhanced and impactful now. It’s those little flourishes that really come to light and helps this transfer pick up an edge over the 1080p. Colors are on point and Dolby Vision offers nice highlights and enhancements to the primaries without blowing them out. The red town is still glorious against that big blue open sky. Spectral highlights are lovely with glints off gun barrels, beads of sweat on faces and the silver bedazzled saddle Eastwood picks up for his efforts. Maybe not night and day improvement because that 2020 disc was so good, but this is a welcome appearance. 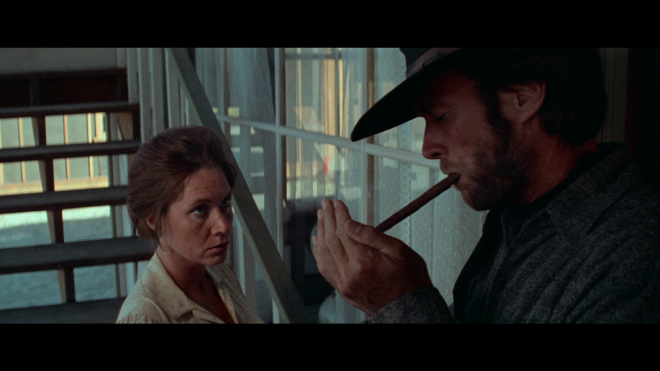 Listening through the DTS-HD MA 5.1 and 2.0 tracks on this disc, they sound virtually identical to the same two DTS-Tracks on the 2020 disc, which is fine. I still overall prefer the 2.0 mono mix over the 5.1 but both are solid options. If you have DTS Neural:X function on your receiver it definitely helps open up the 5.1 track which otherwise largely keeps to the front/center channels with only some dashes into the rest of the soundscape. See my original thoughts from the 2020 disc below: 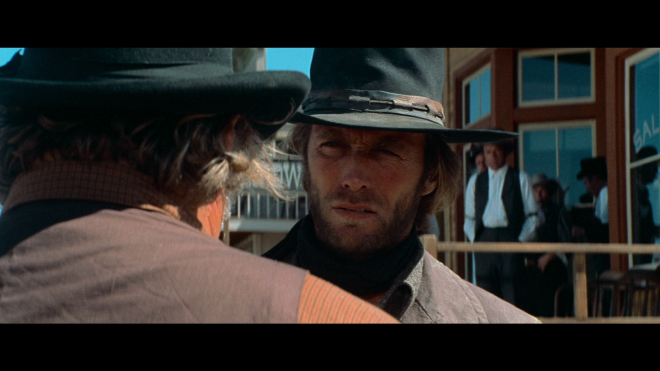 KLSC brings the same decent if slightly over-processed DTS-HD MA 5.1 mix to this disc, but also includes a much more natural and satisfying DTS-HD MA 2.0 mix to the disc. I never really had any issue with the 5.1 mix beyond it being unnecessary. The rears and sides were hardly used anyway that it felt like a 2.0 mix with the Front/Center channels managing the workload. This time around the balance of the mix feels more accurate for the 2.0 mix. It's less tinny and without sounding quite so airy and spaced out. Even though there's a great sense of atmosphere and imaging, the mix feels tighter. Scoring is on point, that Dee Barton's score always creeps me out. Hiss is never an issue as both tracks are clean. 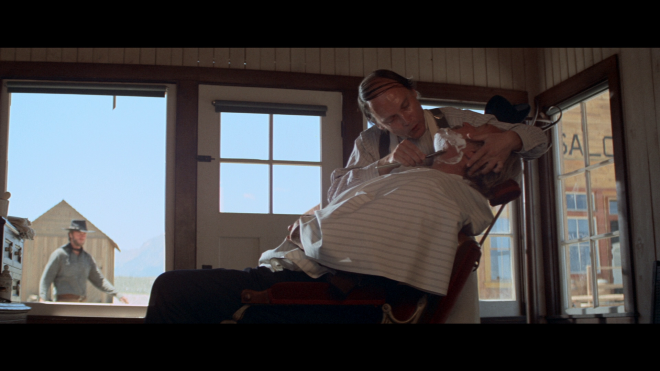 KLSC digs in for this release to give fans all of the bonus features from the 2020 disc while also offering up a new audio commentary from film historians Steve Mitchell and Nathaniel Thompson that’s a great listen. There are a lot of historical anecdotes to pick up on as well as their very clear love and enthusiasm for this film. If you haven’t dug through the archival commentary and cast interviews they’re also worth taking the time to enjoy as well, Alex Cox is always welcome to offer some amusing tidbits! 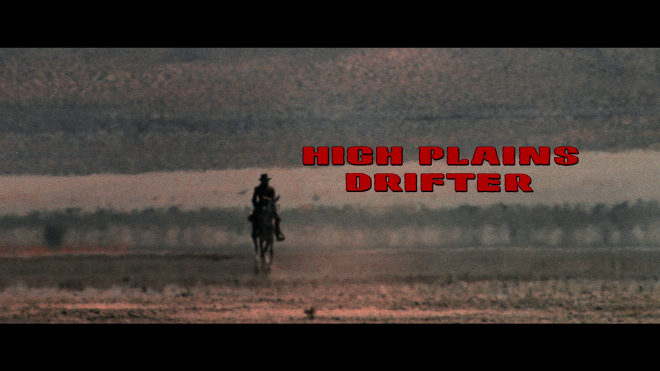 In the wake of his turn through Spaghetti Westerns, Eastwood delivers a true genre game-changer with High Plains Drifer. One part revisionist western one part ghostly revenge horror film, it’s a bleak and nihilistic run for Eastwood while remaining one of his best films nearly fifty years later. Kino Lorber Studio Classics already hit big with a great Blu-ray release in 2020 and now they’re notching another win on their belt with this new 4K Ultra HD Blu-ray. The new Dolby Vision master offers up some beautiful enhancements to the haunting visuals on screen. The audio tracks sound the same to the 2020 disc - which is just fine with me. As they bring over their previously issued bonus features, KLSC also fires up a new and very good commentary track to sweeten the deal. If you’re an Eastwood completionist or still need to add this one to the collection, High Plains Drifter on 4K Ultra HD Blu-ray is Highly Recommended.