[Review Excerpt from Import UK 4K Ultra HD Blu-ray SteelBook]
"Years before stirring heated controversy in the intergalactic universe of Star Wars fandom, Rian Johnson gave science-fiction fans an action-packed, mind-bending thriller in Looper. And the brilliance of Johnson's film is in its simplicity despite tackling complex, cerebral matters like time travel and even more complicated human emotions like remorse and redemption. Set in the year 2044, the plot, which Johnson also wrote, is ultimately focused more on the characters than on the dystopian Kansas City, the technology that makes time travel possible and the rousingly creative action visuals. In fact, Johnson makes this futuristic world feel very matter-of-factly and mundane, like a gritty, lived-in environment straight out of a Philip K. Dick story. The characters are simply surviving the day-to-day grind, and the future tech is an everyday occurrence, if not also as much of a headache as our own.

"Joseph Gordon-Levitt turns in an excellent performance as Joe, a dutiful assassin confronted by his possible future when encountering his older self (Bruce Willis), inadvertently causing a ripple effect that threatens the trajectory his life was on. On the flip side, the older Joe has the opportunity to correct the demons of his past haunting his future, which fuels the actions and decisions that ironically end up solidifying those ghosts while introducing new regrets. The scene at the diner is a thought-provoking and weighty conversation where the future wrestles with feeling worthy of the absolution he eventually finds yet working to ensure it happens, but the younger fights to preserve his self-serving present. Caught in the middle is Emily Blunt's Sara laboring between the two extremes, and as a single mother to the precocious Cid (Pierce Gagnon), she battles her past to build a present that guarantees her family a stable future. 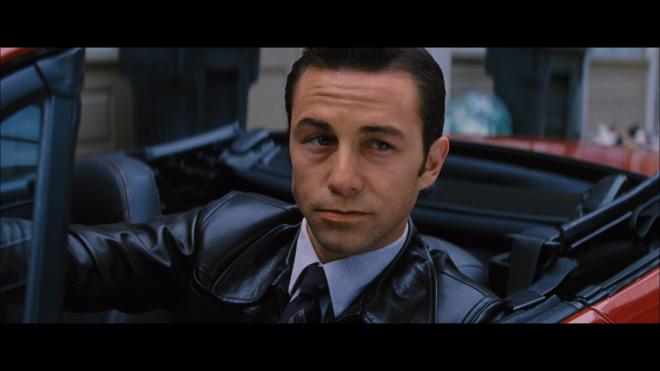 "Ultimately, Rian Johnson's Looper is an intelligently conceived and intricate sci-fi thriller that allows its audience to predict the conclusion but still manages to surprise in the end."

Vital Disc Stats: The Ultra HD Blu-ray
Celebrating the film's 10th Anniversary, Sony Pictures Home Entertainment brings Rian Johnson's Looper to Ultra HD Blu-ray as a two-disc combo pack with a flyer for a Digital Copy, which can be redeemed via sonypictures.com and Movies Anywhere. When redeeming said code, users have access to the 4K UHD version with Dolby Digital Plus 5.1 audio. The dual-layered UHD66 disc sits comfortably opposite a Region Free, BD50 disc inside a black, eco-elite vortex case. At startup, the disc goes straight to a familiar menu screen with the usual options along the bottom, full-motion clips and music playing in the background. 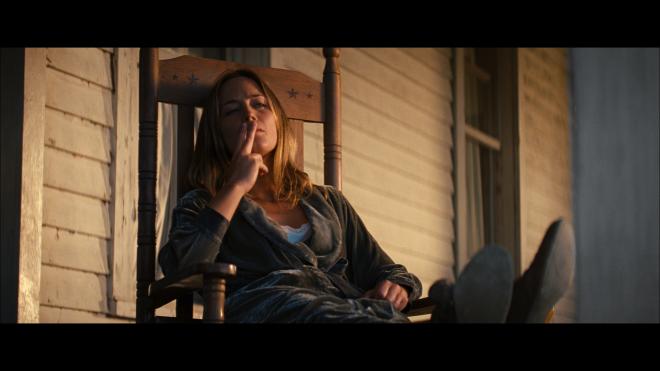 Rian Johnson's sci-fi thriller lands for the second time on Ultra HD about seven months after the U.K. SteelBook courtesy of Entertainment One, giving fans the unique opportunity to compare how different studios handle the same material during the HDR process. The former reportedly struck their HEVC H.265 encode from a fresh 4K digital intermediate of the original 35mm camera negatives, presented in the HDR10+ metadata. Meanwhile, the latter offers a new HEVC-encoded transfer that appears, as far as we've been able to inquire, to have repurposed the same 2K DI used for the last decade of home video releases, but they remastered it with a fresh HDR media profile under the guidance and approval of director Rian Johnson and director of photography Steve Yedlin. The results are both impressive and surprising where this UHD edition from Sony is the decisive winner, offering a notable upgrade over its UK predecessor and making it the best the film has ever looked in any home video format.

Of course, Yedlin's heavily stylized cinematography is worth taking into consideration when assessing a film with a very deliberate aesthetic, such as this one. Back and forth comparisons reveal little or if any discernable difference in the overall resolution, yet this transfer still takes the edge, showing a tad better definition and detailing around the farmhouse and the surrounding foliage. The fine lines and objects in the background are more discrete and distinct from a distance as well, and the thin-layered grain structure is also far more refined, natural-looking and better resolved, giving this 4K video an attractive film-like appearance. This UHD edition also brings to light the unnecessary and basically pointless discussion about fake-4K versus true-4K or the unsubstantiated need for pixel-counting. Ultimately, for a UHD release, the HDR mastering is more important when gauging the merits of a transfer in combination with the quality of those pixels for preserving the fidelity of its source rather than simply the number of pixels. And in this case, the U.S. release arrives with significantly lower numbers on paper than its U.K. counterpart, yet Sony's UHD edition is the clear winner and the stronger of the two. While retaining the high contrast photography intended by the filmmakers, giving the action a somewhat slightly-cooked veneer but feeling appropriate to the hot, sweltering climate, this Dolby Vision HDR presentation actually delivers cleaner, purer whites throughout. Although some instances of very mild blooming around certain light fixtures persist, which is inherent to the source and due to artistic choices, specular highlights are nonetheless crisper and tighter, allowing for a bit more visibility of the finer details within the hottest spots. Black levels remain as inky rich as before with deep, silky shadows and strong shadow details, but with the improved contrast balance, many nighttime sequences, like the exterior shots with the city skyline, are snappier and more eye-catching, providing the 2.39:1 image with a lovely cinematic appeal. Most impressive and arguably the biggest improvement is the overall color palette, boasting richer, fuller reds and livelier, more energetic greens in the scenes at the farmhouse mixed with a vibrant variation of earth tones and warm yellows. Facial complexions, meanwhile, are surprisingly more accurate and lifelike with a more natural rosy-peach hue in the entire cast, revealing tiny negligible blemishes in their faces.

In the end, this new 4K transfer delivers a noteworthy jump over its predecessor and will serve as a great example of what can be accomplished when the process of HDR mastering is done right and with careful attention to preserving the fidelity of a source. (Dolby Vision HDR Video Rating: 90/100) 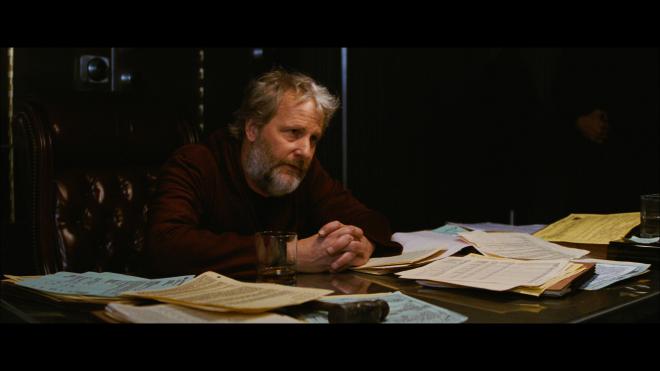 For this UHD edition, Sony further tempts fans into upgrading with a smashing, first-rate Dolby Atmos soundtrack that delivers a welcomed improvement over its DTS-HD predecessor. Comparatively, it's not a significant night and day difference, but it is an appreciable improvement nonetheless with the height channels providing a more natural, elevated soundscape. Sequences in the city come with a variety of street commotion subtly echoing all around and the flying vehicles convincingly zooming overhead, and at the farmhouse, various atmospherics are distinctly heard from every direction, generating an immersive hemispheric soundfield. Meanwhile, imaging feels expansive and spacious as background activity smoothly moves between the three front channels and into the off-screen space, exhibiting outstanding definition and distinction in the mid-range even during the loudest segments. The object-based mix retains the design's authoritative, room-energizing low-end that not only rattles walls but also provides an awesome chest-pounding impact to the visuals. Amid the loud action, dialogue remains precise and well-prioritized from start to finish, making this track absolutely satisfying and a fun listen. (Dolby Atmos Audio Rating: 92/100) 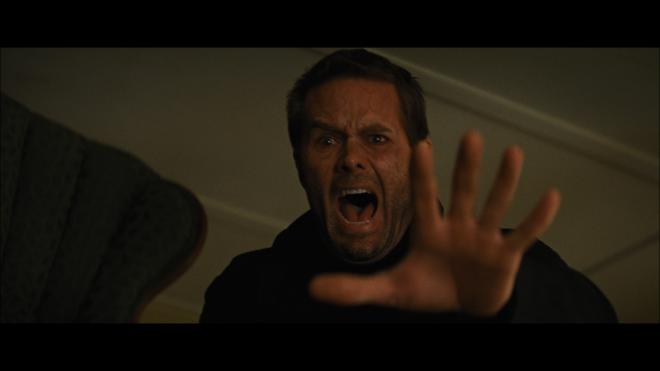 For this UHD edition, Sony ports over the same set of supplements as before but are only available on the accompanying Blu-ray disc. 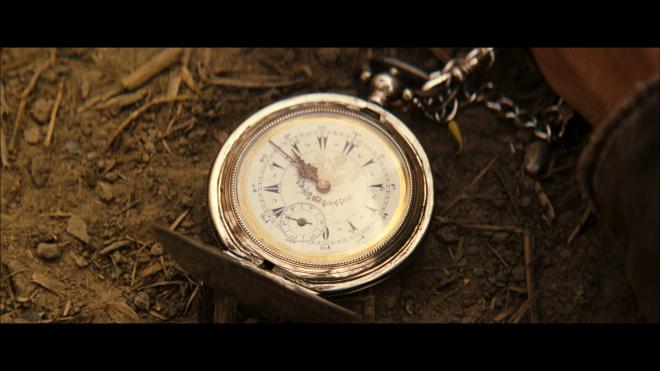 "From writer and director Rian Johnson, Looper is an intelligently tense and stylishly engaging sci-fi thriller with an edge-of-your-seat story and visually creative action that builds to a satisfying conclusion. Starring Bruce Willis, Joseph Gordon-Levitt, Emily Blunt and Jeff Daniels, the sci-fi gem continues to be an impressive, thought-provoking feat that's destined to be a cult classic."

With the supervision of the filmmakers, Sony celebrates the film's 10th Anniversary on 4K Ultra HD with a fresh HDR remaster of the elements, bringing it home with a gorgeous Dolby Vision HDR presentation and a first-rate Dolby Atmos mix that fans will love. Although featuring the same set of supplements as before, the overall UHD package is nonetheless highly recommended and is a surprisingly beautiful upgrade over its U.K. SteelBook predecessor.