Kurt Russell and John Carpenter join forces once again to give Snake Plissken another round of action in Escape from L.A.. More focused on industry satire than delivering anything new or original for the franchise, the film is still a lot of fun. Now Paramount Home Entertainment gives this sequel the 4K Ultra HD Blu-ray upgrade with an excellent Dolby Vision transfer. However, no audio upgrade and the lack of any important bonus features of any kind make this a true bare bones disc. If you're you're happy with the Scream Factory disc, wait for a good sale price before upgrading. For Fans Only

UPDATE: 2/16
We've heard back from our Paramount rep - they are aware of the audio issue and are currently working on a correction, they'll be sending over details as soon as it's available.

UPDATE 2/17
In what feels like record time, Paramount is getting a disc replacement program in place to have corrected discs out ASAP. Here are the details below:

"It has come to our attention that there is an English audio encoding error on the new 4K Ultra HD Disc of John Carpenter’s Escape from L.A.  Paramount Home Entertainment has corrected the issue and is immediately creating new discs, however the initial shipment of discs has reached some retail outlets.  Fans who purchase a disc with a white UPC barcode on the package and would like a replacement should email [email protected]com for instructions.  The corrected product will be shipped free of charge.  If your disc package has a yellow UPC barcode, then it is the corrected version and you do not need a replacement.

It is always our intention to distribute the highest quality product and we apologize for any inconvenience this error has caused."

"As I've gotten older and I've repeatedly devoured John Carpenter's films and watched and/or read interviews - I feel like Escape From L.A. is his comedically cynical response to where the Hollywood film industry was going. With the call for more sequels and a push for cheap-looking CGI effects, it's easy to see where he would be interested in making a takedown of the industry hand that feeds him. Especially when you look at the films he'd made in the 90s up to that point. They were either forgettable and not really "his" - Memoirs of an Invisible Man, grossly under-appreciated - In the Mouth of Madness, or dumped into theaters and scorned by critics after a recent national tragedy - Village of the Damned. You follow that progression you can see why Carpenter would have some barbs for the industry. But the satire continues for all walks of 90s American life right up to Cliff Robertson essentially playing a fascist version of Pat Robertson.

While a bit pointed, Escape From L.A. isn't just the grumblings of a crotchety old man, you can also see that Carpenter and Russell are having a hell of a great time with this one. Russell was still a solid leading presence in the 90s and he slips back into the leather duds, beard stubble, and eyepatch with ease. The movie progresses from one over-the-top set piece to the next bringing with them a bunch of great characters along the way - Bruce Campbell will always be a favorite moment. 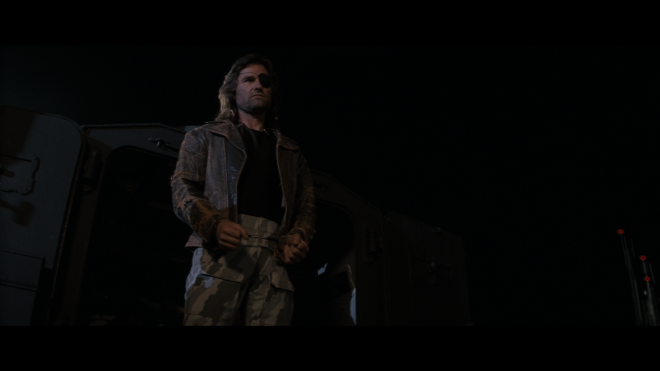 With Russell as a cowriter with Carpenter, you can see how this movie was actually an excuse for two old friends to hang out again. And I'm all for it. Sure, it's of the same story metal as Escape From New York, but then it doesn't try to set the world on fire. It's campier with a thick tongue-in-cheek sense of humor. It's a ride. If you're not enjoying the ride by the time Pam Grier's Hershey appears, you've long missed the boat. It's a shame this movie didn't work out, we could have enjoyed Escape From Mars instead of Ghosts of Mars." 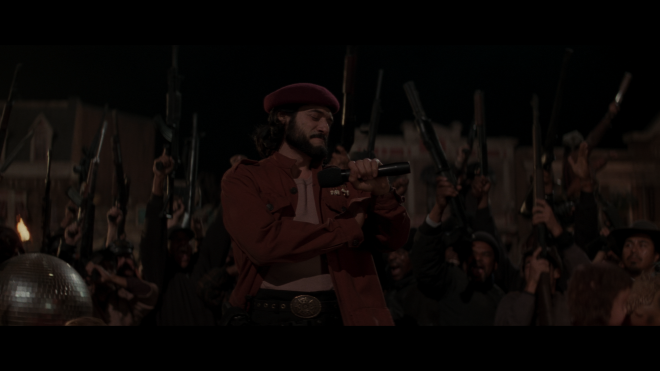 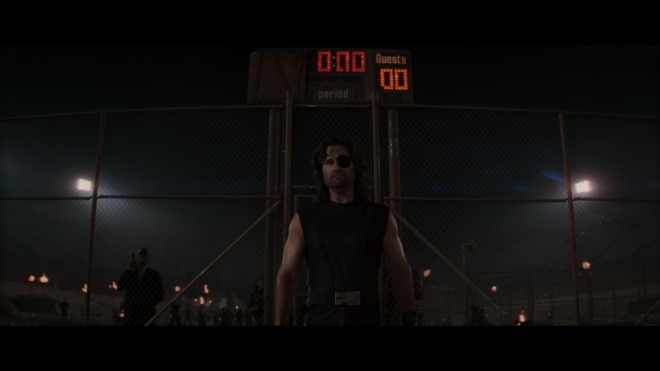 After getting an impressive new transfer for the Scream Factory Collector’s Edition Blu-ray, Paramount released the film to digital retailers in full 4K UHD with Dolby Vision HDR. Now that same excellent transfer comes home to disc. Largely shot at night, Escape From L.A. is a very dark black shadowy film. Pretty much every character wears a shade of black with only a few moments of color pop. The 2020 Blu-ray was a welcome improvement over the first 2010 Blu-ray disc and this Dolby Vision transfer takes the next leap offering even better shadow separation and black level enhancements. Crush is thankfully nowhere to be seen. Where and when colors do pop they shine. Snake’s single blue eye, Hershey’s palace, the red readout on snake’s watch, all offer some terrific color enhancements. 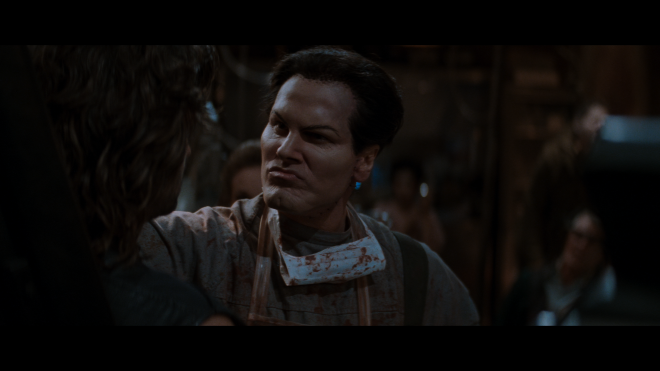 Details are strong showing even more fine refinement in facial features, clothing textures, and production design. The dated and genuinely pretty terrible CGI effects stick out like a sore thumb. Softness is the primary issue here so even when you have a live-action actor in the foreground and CGI scenery, it’s pretty rough looking. Without redoing the effects from scratch, they’re cooked in that way. Now, where this disc transfer really holds court is with grain structure. With the nice high bitrate in the mid-70mbps range with peaks in the 90s, grain is much better resolved and organic looking than the streaming 4K presentation I watched on VUDU. So there are pluses and minuses, but this is ultimately the best this film has looked on home video. 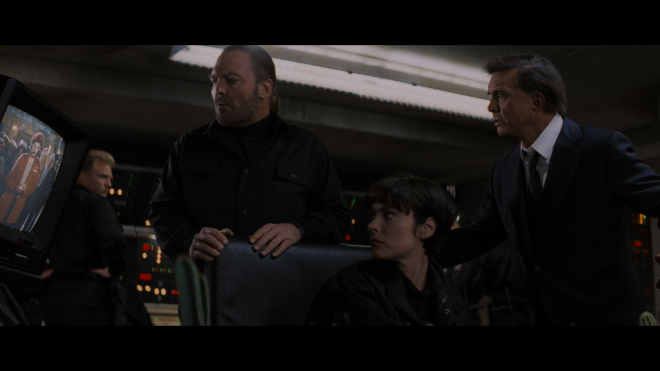 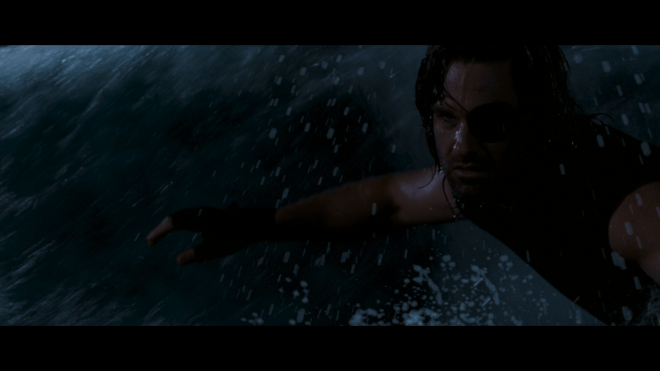 After receiving a question from a reader about an audio issue, there does appear to be a problem with this 5.1 mix with dialog coming in through the side channels. During my initial review, I was running DTS Neural:X and didn't notice this effect through my Oppo 203/Onkyo receiver setup. However, when I turned Neural:X off and played just the straight DTS-HD MA 5.1 I did pick up some slight dialog bleed into the side channels. I didn't hear anything in the rears although it appears some folks are having that problem too. Playing the 2020 Blu-ray again didn't reveal the same issue so it's unique to this disc. I've reached out to our Paramount reps to learn if this is in fact a new approved audio master and this is how the film "should" sound or if there has been an error in the mastering. Will update as soon as I learn more.

UPDATE: 2/16
We've heard back from our Paramount rep - they are aware of the audio issue and are currently working on a correction, they'll be sending over details as soon as it's available. 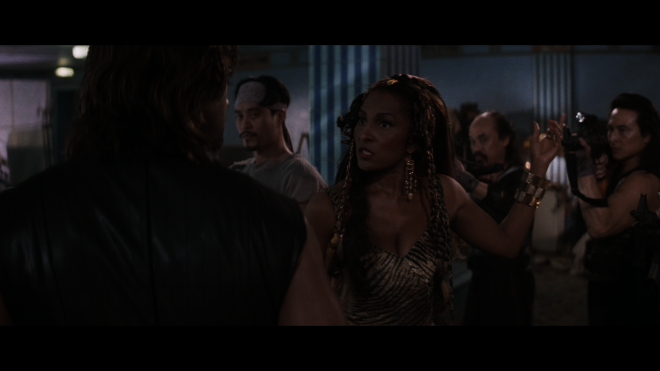 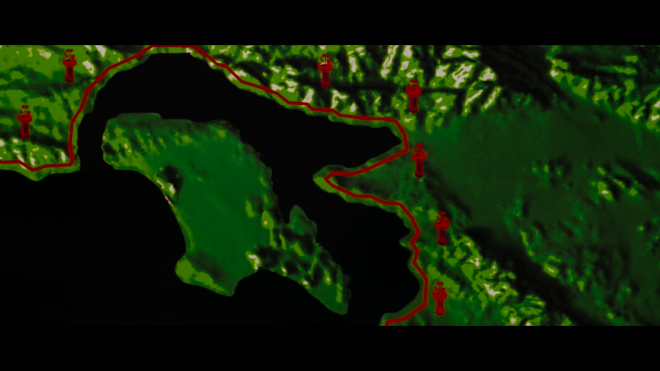 The Scream Factory disc came with a nice assortment of bonus features. While I continue to hope for a new Carpenter/Russell audio commentary, sadly that didn’t happen for this one. This is as barebones as it gets with only the film’s original theatrical trailer. 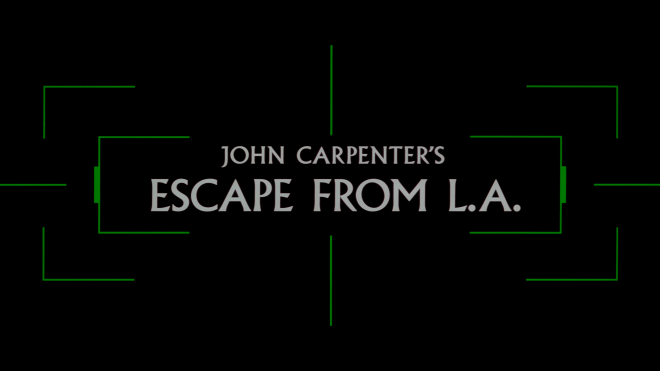 Escape From L.A. certainly isn’t the best Carpenter flick, nor is it the worst. To put it another way, it’s my fourth favorite of the movies John Carpenter and Kurt Russell made together. But I dig it. It was the first Carpenter movie I saw in theaters and still think it’s a pretty damn entertaining satire of big-budget 90s Hollywood action movies. But I recognize I’m in the minority on that score. Being that this film appeals only to a select few of Carpenter's fans, I have a hard time recommending this 4K disc - especially after Scream Factory's excellent 2020 Blu-ray. If some more effort went into this disc beyond a video upgrade then maybe I'd sing a different tune. As it stands, the transfer is great, and I enjoy the movie, but without an object-based audio track or any extra features of any kind, it really is For Fans Only, and even then I'd wait for a significant price drop.